It sure seems like everyone is waiting on the next bail-out, the fourth round of the CARES Act.

This anticipation has been steadily building too, and it's beginning to become quite loud in the financial press. For example, recall that not even two weeks ago, American Airlines said it would be cutting tens of thousands of jobs, some 19,000 of them involuntarily, in October, which is now less than a month away, if the airline company didn't receive another government bail-out. But it's not just individual companies or industries that need a bail-out, for it appears to be broad-based and all-encompassing across the entirety of the US economy, and the need is not just in regards to private companies but also to governments and agencies. Just yesterday, in the New York Times, the budget woes of the nation's largest transportation system were discussed, the Metropolitan Transportation Authority, which includes the NY City subway system, and suffices to say that if they had budget problems before, well, they really have them now with a collapse in ridership of about 70%.

The next round of stimulus is, however, deadlocked in Congress, with both sides of the aisle seemingly digging-in as far as demands go.

That said, the Federal government has, as of August 31st, according to the latest Daily Treasury Statement, over $1.7 trillion on deposit at the Fed, meaning there is money available for immediate action, and it should also be noted that the new fiscal year for the Federal government begins on October 1, 2020, so CARES 5.0 could be right around the corner following this round (CARES 4.0).

Besides the fact that Congress is in a dead-lock with regards to CARES 4.0, Treasury Secretary Steve Mnuchin was before Congress yesterday afternoon (link is to the testimony on YouTube, via Yahoo Finance) testifying as to the Federal government's fiscal response to the Covid-19 pandemic. It is clear that there is still a wide range of views in Congress as to what is, and what is not, an appropriate level of fiscal responsibility.

There is, however, one interesting dynamic in all of this: There is plenty of broad-based support for another round of Economic Impact Payments, those $1200 individual payments to adults, and those $3400 payments to a family of four that many Americans and American families qualified for. This broad-based support was highlighted just yesterday by Gallup, in which "seven in 10 Americans (70%) say they would support the government sending an additional economic impact payment (EIP) to all qualified adults".

So here we find ourselves in early September, among other things, very close to the next arrival of Economic Impact Payments. If I were a betting man, which I'm not, I'd say there will be another round of Economic Impact Payments in September, with talks beginning for yet even another round in October, and if there are not talks immediately started in October, the next round of stimulus talks would have to wait, in my opinion, until some time after the Presidential re-inauguration or inauguration in January 2021. I think the next round of payments will be in September because the money is already there, or at least some portion of $1.7 trillion is there for stimulus, and next month begins a new Fiscal Year, so something can indeed be done over the next few weeks. Remember, it was back on July 23 when Treasury Secretary Steve Mnuchin said, in a CNBC interview, “the President’s preference is to make sure we send out direct payments quickly so that in August, people get more money”.

Prudent individuals who find themselves on the receiving end of the Economic Impact Payments, individuals who are both willing and able to save that money in real money, gold & silver, may want to do so, especially with the Fed's brand new official policy of embracing of higher inflation, along with a new-found motivation to see that inflation basically spreads like wildfire. Indeed, in Powell's speech at the virtual Jackson Hole Economic Symposium last Thursday, August 27th, Fed Chair Jerome Powell said, "following periods when inflation has been running below 2 percent, appropriate monetary policy will likely aim to achieve inflation moderately above 2 percent for some time". In other words, if the Fed is saying they will actively attempt to let price inflation run hot, which is another way of saying they will actively strive to see that the US dollar loses more than 2.0% of its purchasing power every year. The bottom line is that mathematically speaking, in the simplest of terms, unless a person is saving the Economic Impact Payments in Gold & Silver, each and every person who keeps that money on deposit in a savings account, in a checking account, or as cash money under the mattress or in the safe, is falling further and further behind if that money is not tapped and put to use. There is no better hedge against inflation than universal, real money - Gold & Silver.

The paper gold-to-silver ratio has been straddling either side of 70: 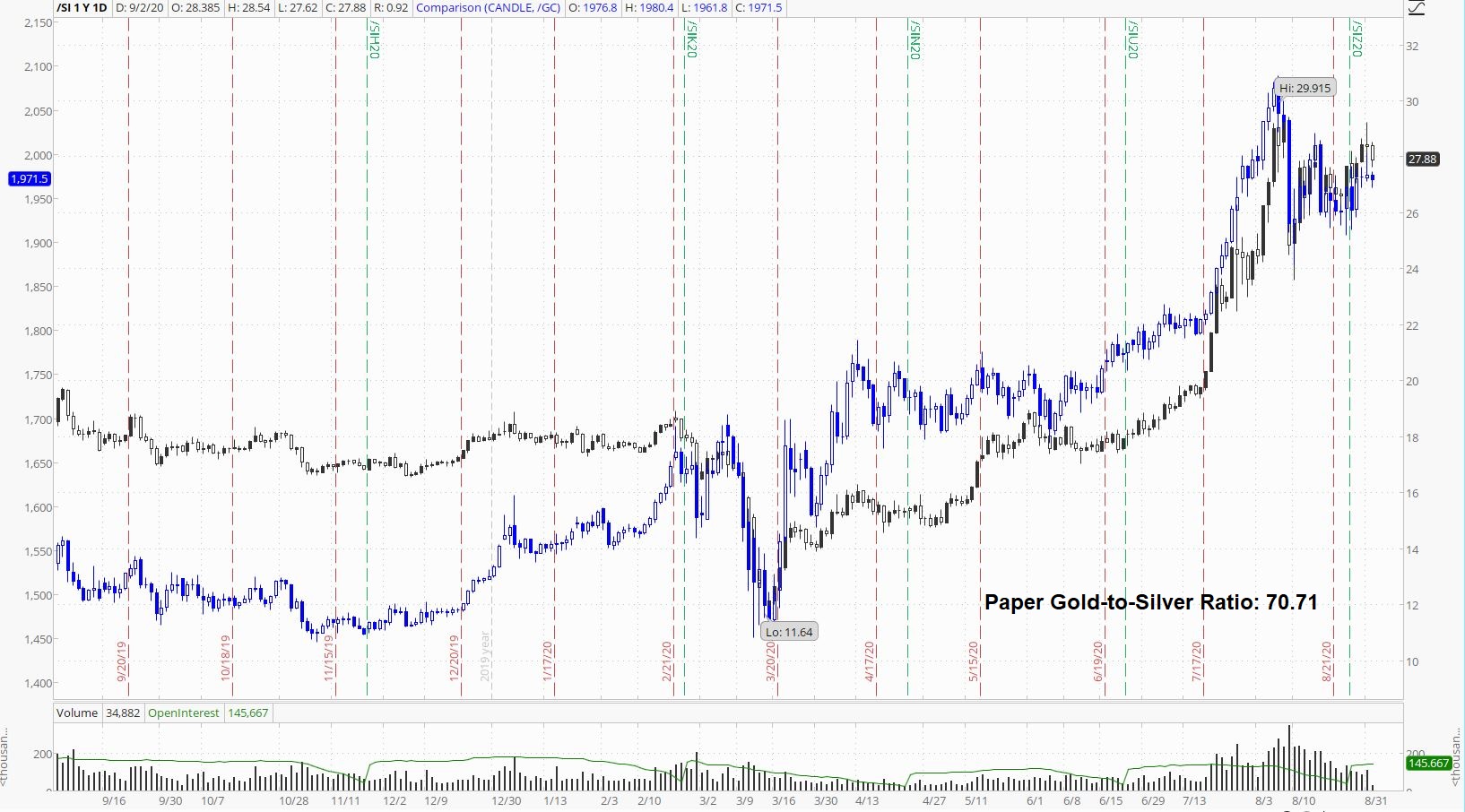 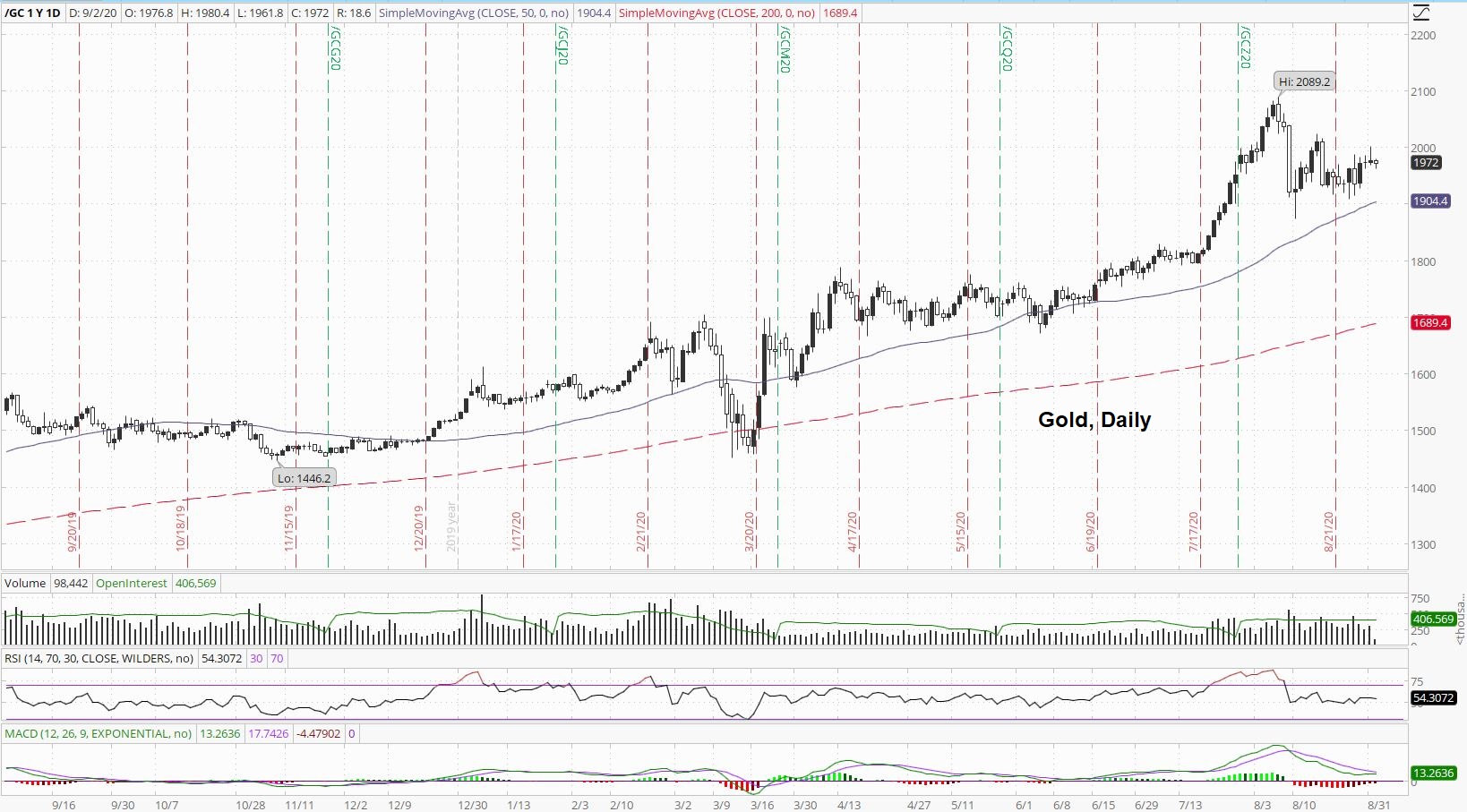 While on the one hand, a lower-high has been put-in, on the other hand, with the next round of Economic Impact Payments imminent, any pullback here is a gift horse. 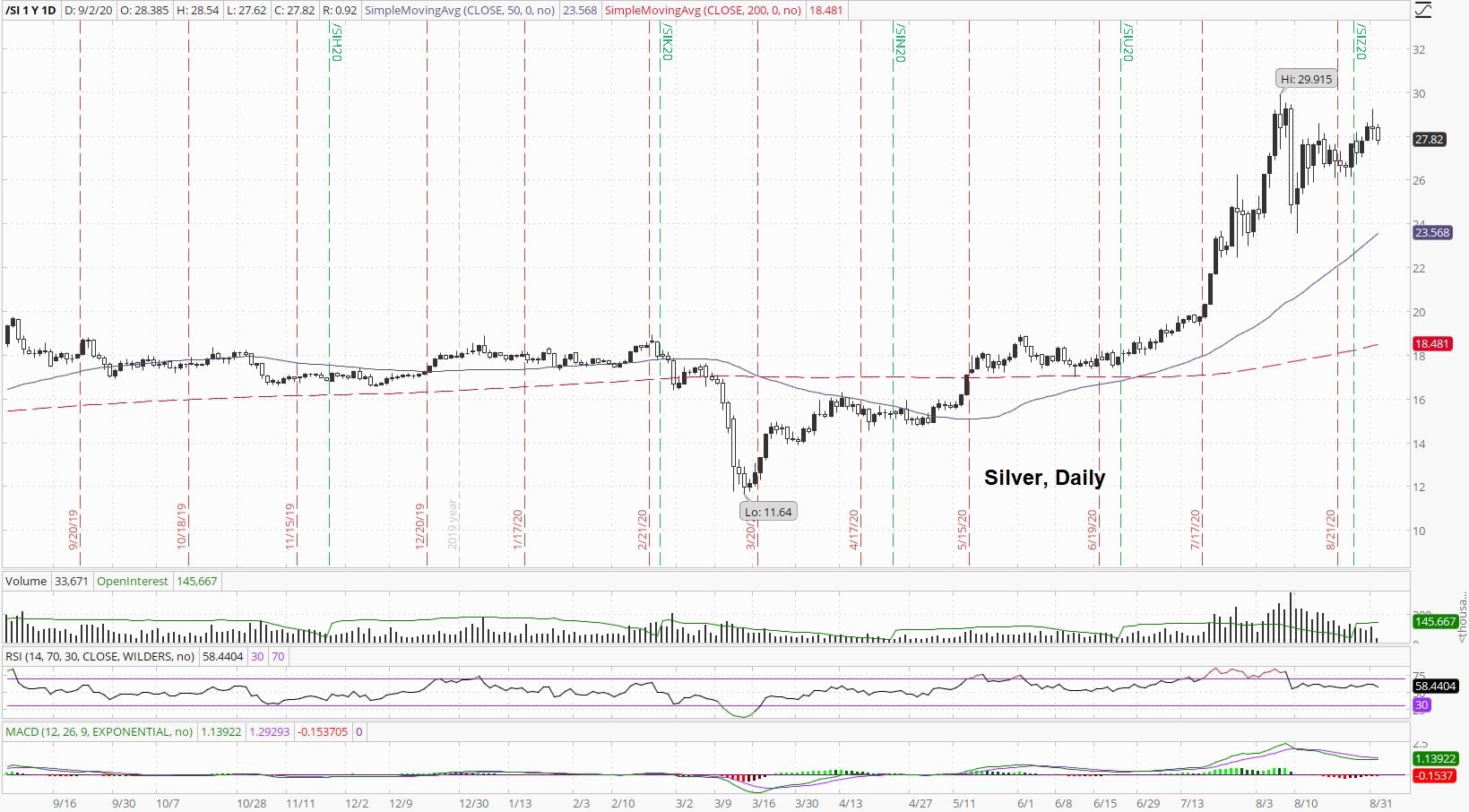 In my opinion, people who have been surprised by silver's performance this year are about to get surprised again, and they'll be shockingly surprised too, but not us humble stackers, for we know that even at $30, silver's still off of its nominal all-time record high by a country mile.

And that's not even factoring for all of the inflation we've had either, since 1980, or since 2011, or since this year, or since whenever!

Palladium had been straddling either side of $2200 for some time, but now palladium looks to be testing a break-out: 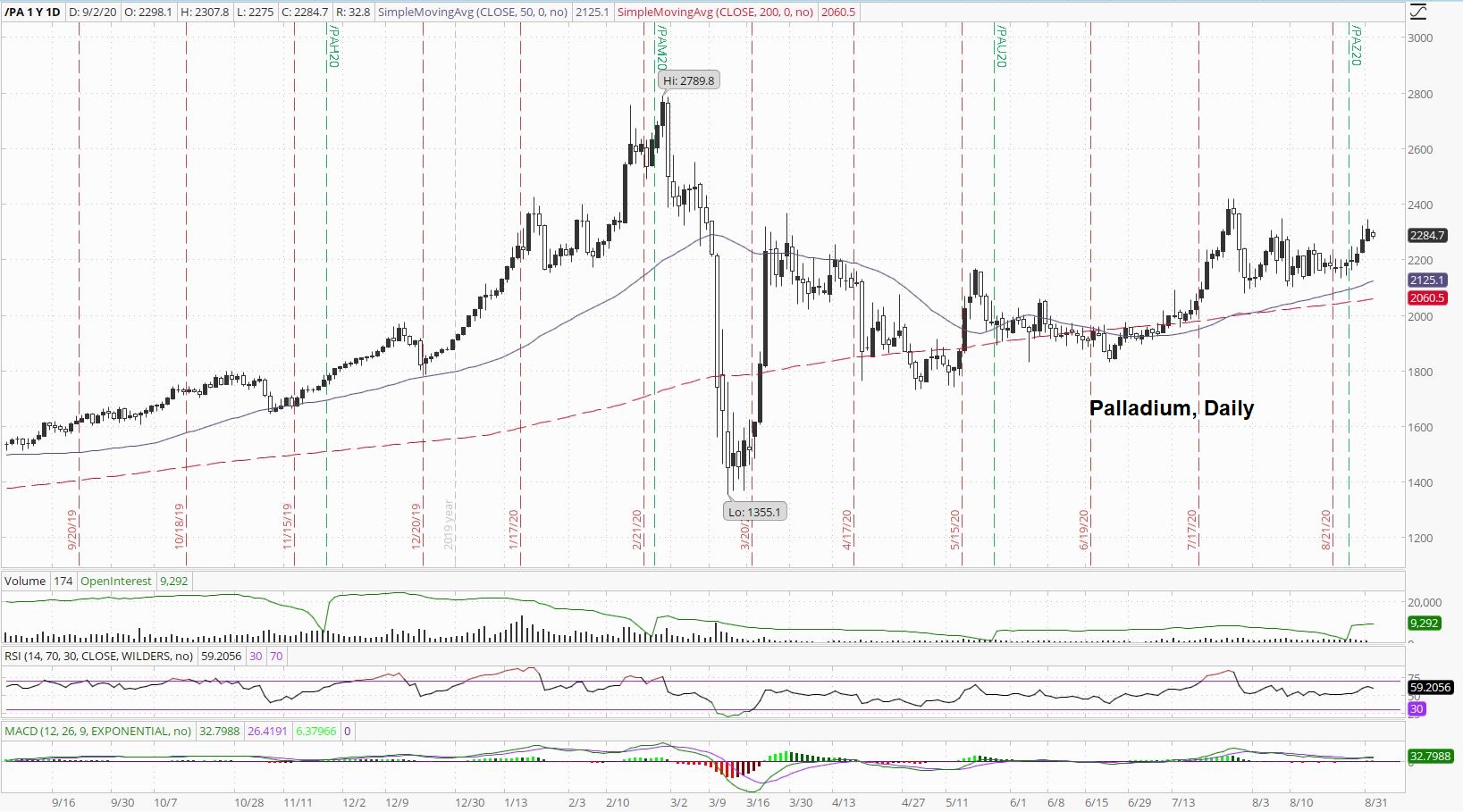 If the precious metals are about to begin their rallies here, after consolidating more over time than over price, palladium is looking like it's ready for its next leg-up too, or at least a quick run to and test of $2400.

And to think, to this day, this second day in September, platinum is still in the red, year-to-date: 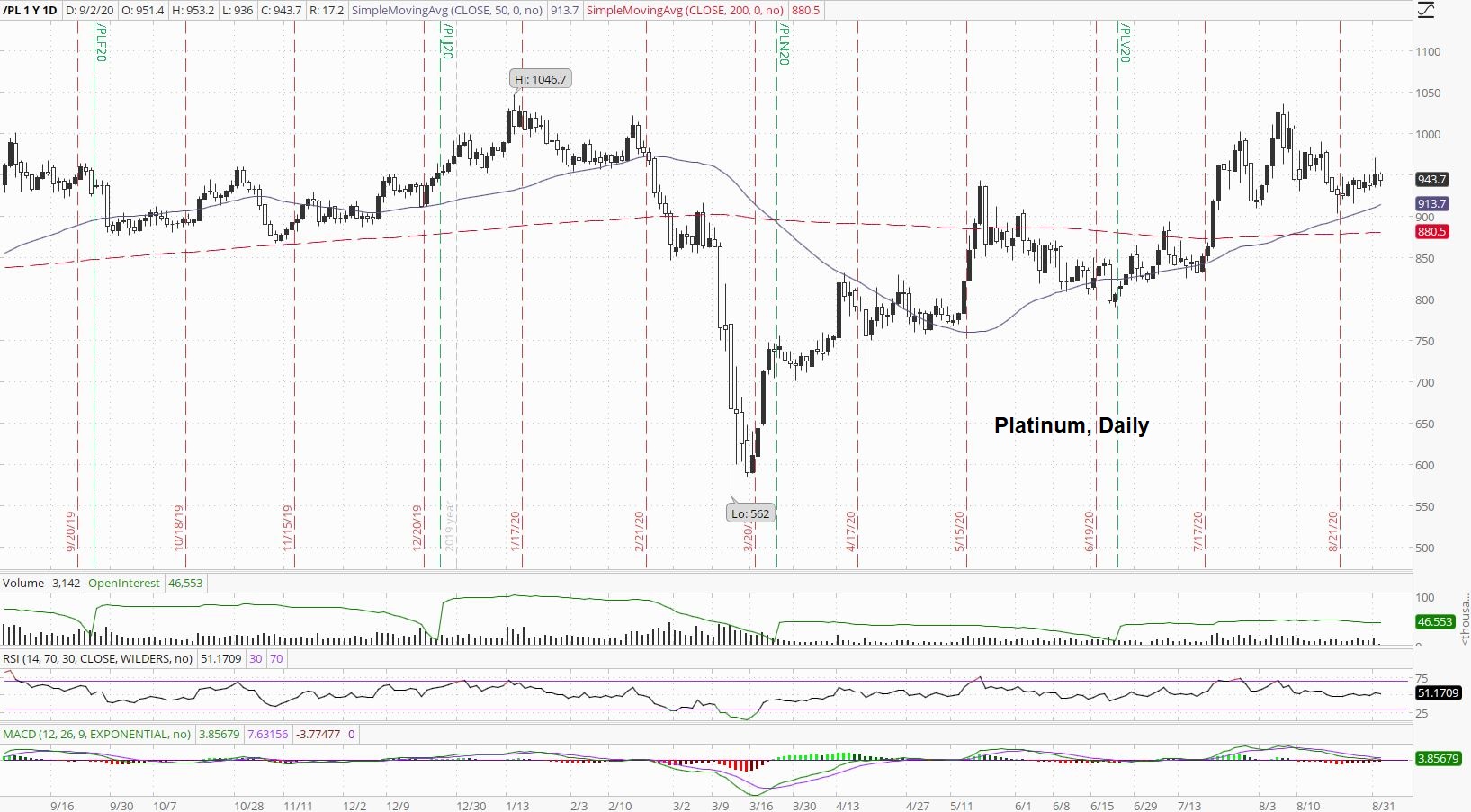 Silver is arguably the most undervalued asset and investment on the entire planet, but there is a case to be made that platinum is in a similar boat, and after being so neglected all year, platinum is also looking like a great "sleeper" investment.

While I personally have no stake in the oil industry, I can only imagine how nerve-wracking it must be to have "skin in the game", not unlike many silver stacker's whose dollar-cost-average is, say, $30, when the price of silver was stuck at $15 for so many years.

Copper, on the other hand, continues to scream, "there is, in fact, a consequence to all of this unbacked, debt-based fiat currency creation": 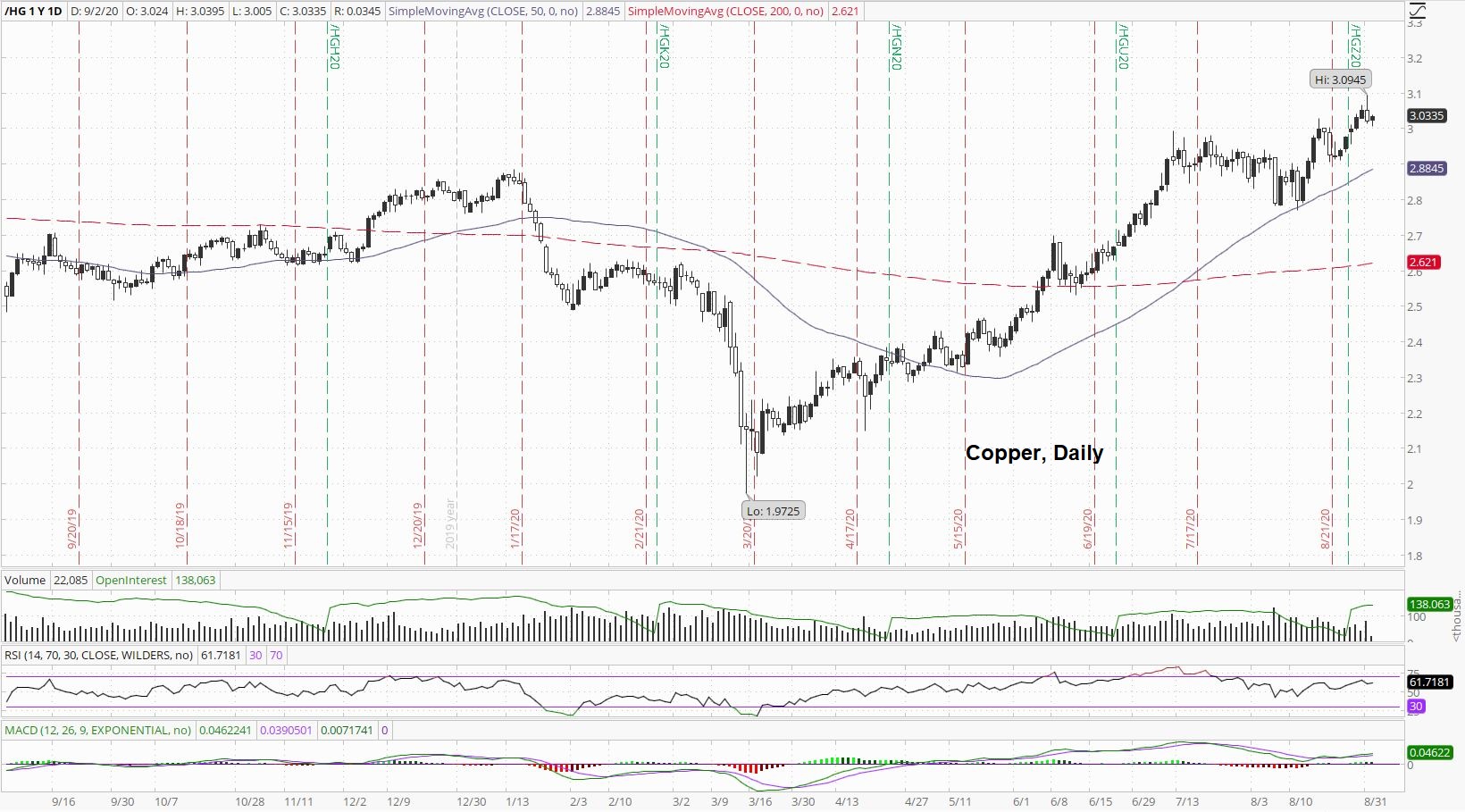 Here's the thing, which is just as valid for copper as it is for the precious metals: You can't print copper!

Of course, I'm not saying to go all-in on the red metal, especially since it's specifically Gold & Silver that are named in the US Constitution, but rather, I'm saying that Gresham's law isn't just some theory from Medieval times, but rather, something we're witnessing in the here and now.

The Fed said they're ready to let inflation overshoot their previous "objective" of 2.0%, and yield on the 10-Year Note briefly spiked: 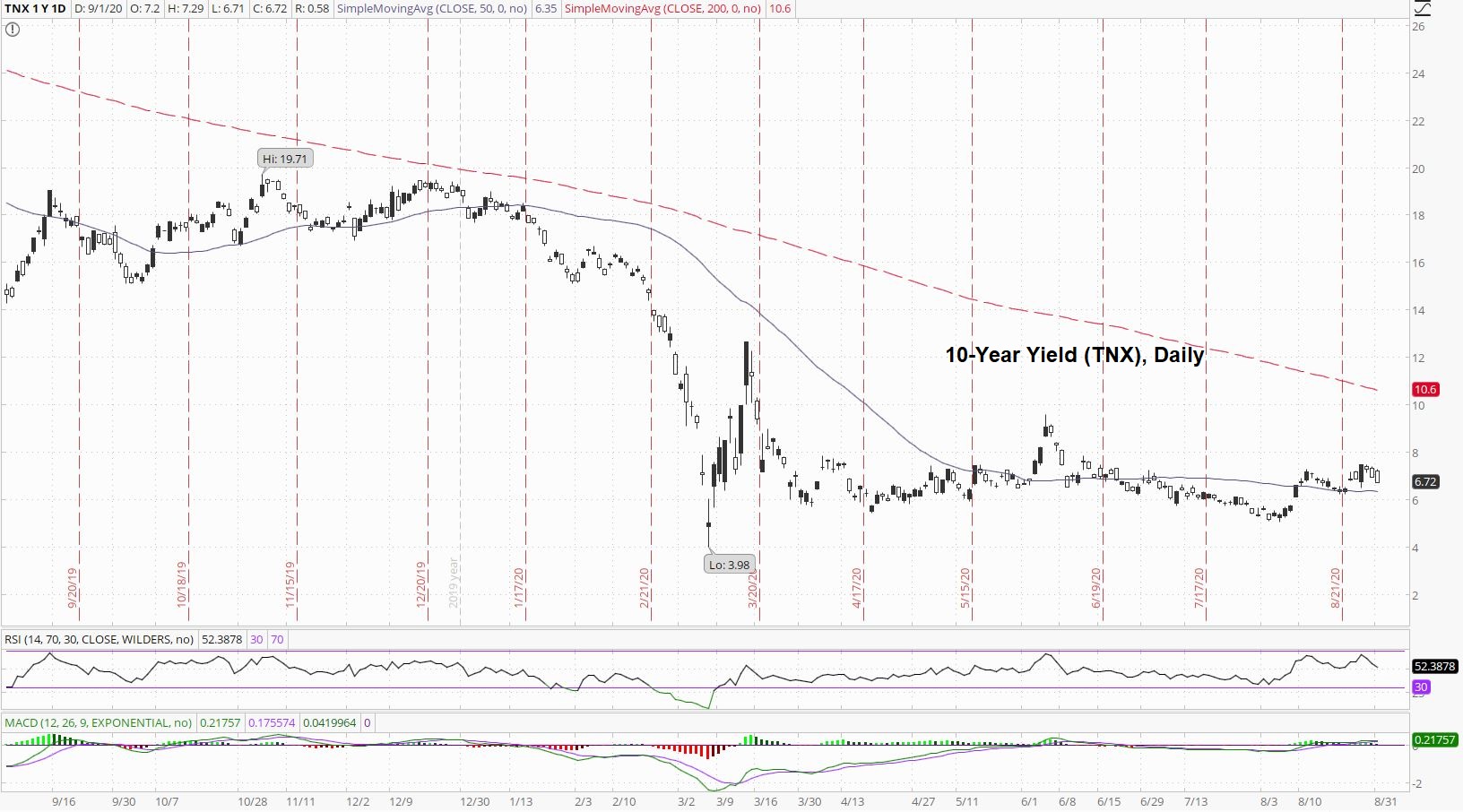 As long as the Fed and the US Treasury are intervening in the financial markets on a daily basis, however, the pressure remains for lower yields, for the servicing of the debt requires it.

Of course, this suppression of interest rates comes at a cost, which can be seen in the plunge in the value of the US dollar: 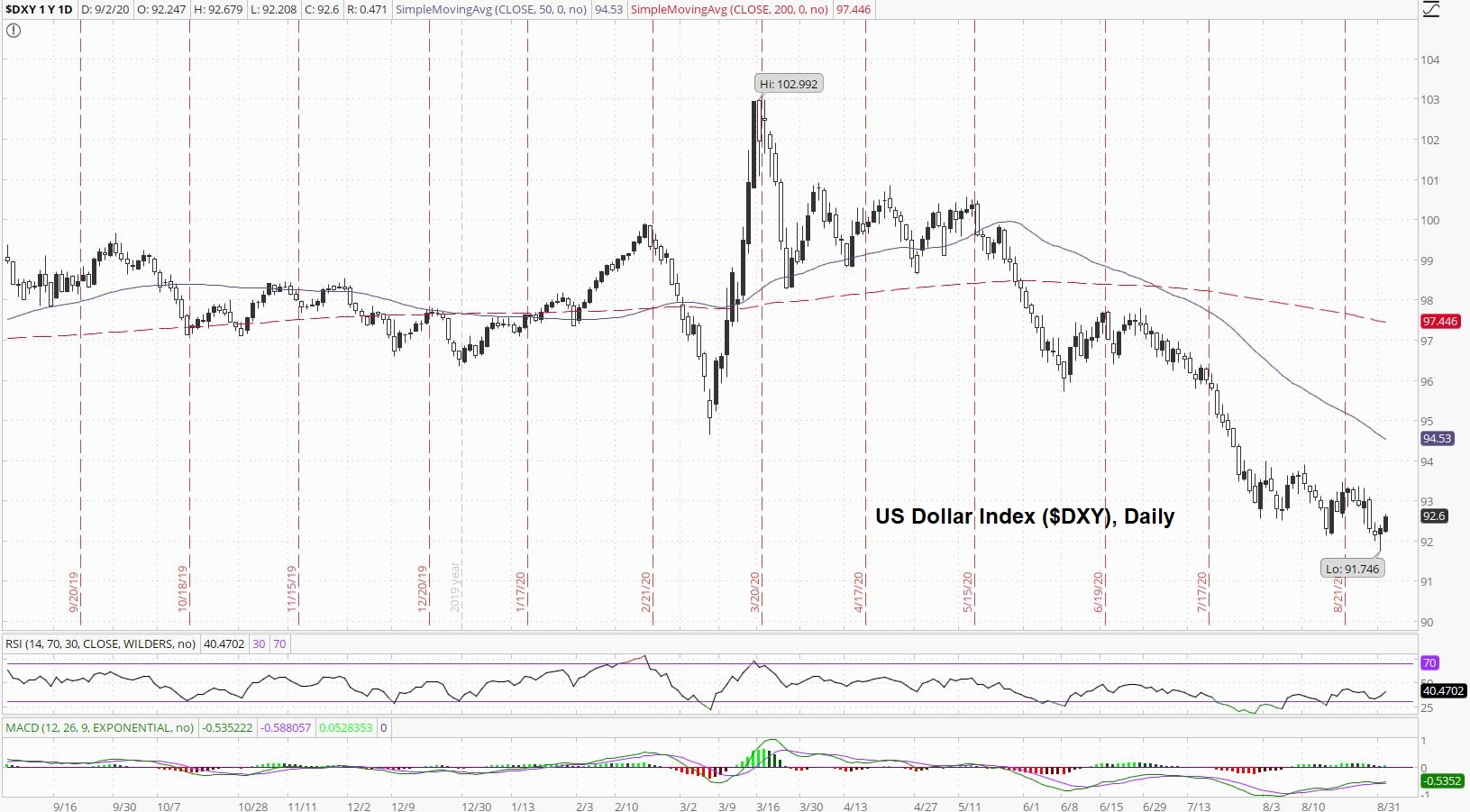 Indeed, holding dollars and holding US government debt are one and the same in that they're both dependent on exponential, unsustainable growth that history always tells us ends in a hyperinflationary spiral.

I didn't even mention the surge in civil unrest since last week's Midweek Market Report, but with one look at the VIX, it seems that problems on Main Street still do not translate into fear on Wall Street: 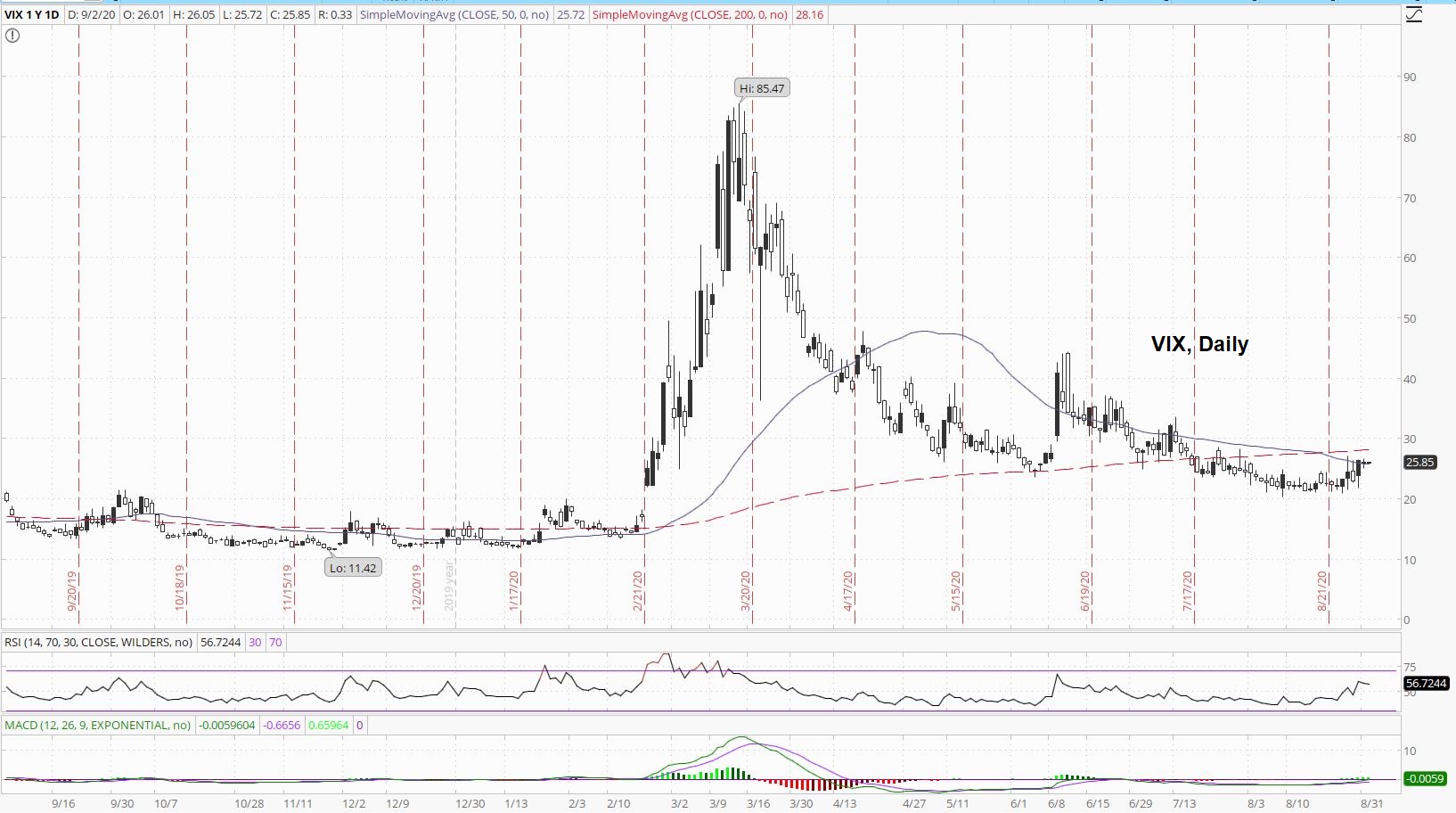 Although it does look like we're starting to perk-up here, and honestly, with everything that's happened this year, in addition to November becoming what will surely be the most contested US Presidential Election of all time, I'm expecting some volatility in the short-term. 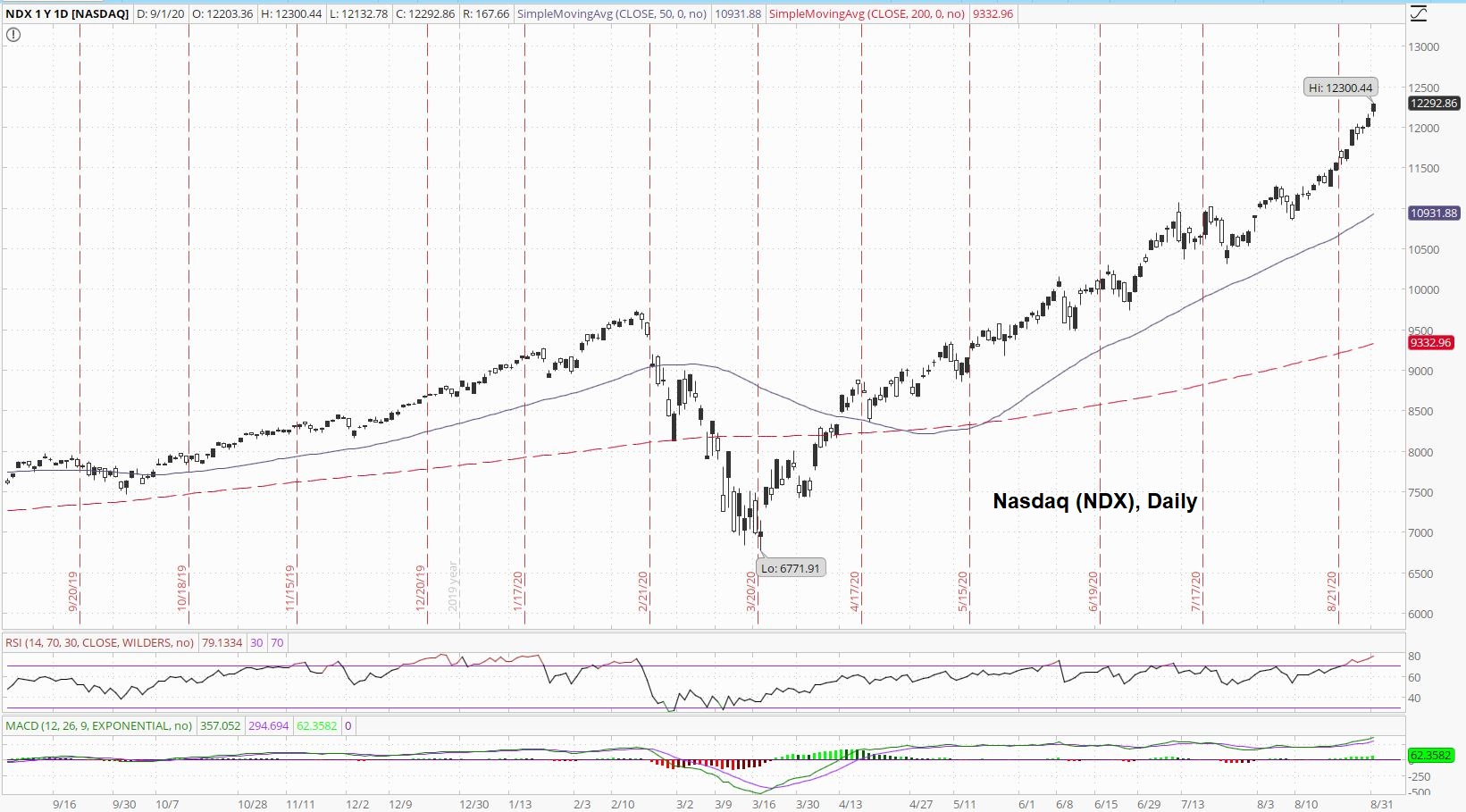 For now, it seems market participants are not concerned with developments on Main Street or in Washington, DC.