After we get through some of the Federal Reserves’ faith-based talking points, we will have a significant update on COMEX fractional reserved gold and silver markets to close.

Now back to Chair Powell addressing the last time the fiat Federal Reserve Note got knocked out by an exponential gold spot price in late Jan 1980, now over 40 years ago.

Around the time when former Federal Reserve Chairman Paul Volcker was jacking the fiat Fed funds rate to peaks of over 20% interest, we had very little in comparative US National Debt loads. Nor close to our now over $100 trillion sized unfunded liability piles, we have only since fractionally saved for over many decades gone.

The Consumer Price Index or CPI rate of official government inflation has continuously and increasingly rigged to favor the government over average US citizens since the year 1980. That's not a coincidence.

For decades now, we have been compounding roughly, not reported 3 to 4% extra consumer price inflation year after year. And somehow the debt pile still outgrows our fiat inflation riggings.

This past week's Jackson Hole virtual speech is a clear and present warning that the rigged government vs. real inflation figure gap is going to get much broader this decade and maybe into the next if this current dominant reserve currency system somehow survives.

Interest rates are at 5,000 yr low levels, and they are going to likely stay that way for the next 5 yrs, even if the Fed has to monetize, everything.

There was undoubtedly a great moderation or restraint of working-class wage increases or raising in real salaries. They flatlined in value in the last 40 yrs. All while that pesky rigged inflation rate was increasingly making them a consumer debt slave class. Usury laws got banned in the early 1980s. That's not a consumer credit card coincidence either.

The global fiat Federal Reserve financialization has essentially made financial and banking crises larger in scale every round.

This next one should be the largest of all time, dwarfing the 2008 GFC's size and scale.

Up next, Jerome Powell is going to highlight the Fed Listens public relations campaign where they pretend their ongoing fiat financialization policies have not hurt the poor working-class nor shrunk the American middle class.

Hey quick question, do you know one of the fastest ways to get inflation ripping higher?

It's an exponential gold and silver price, followed by a commodity value melt-up later on this decade.

By this late August 2025, chair Powell will likely be on the multi-million dollar speech circuit. And we'll be looking at massive inflation and structural changes in the global financial system, both possibly coinciding around that time.

If you missed our report from last week, look below as we cover what central bank monetary changes are now afoot around the world’s largest economies.

Let's move on to this week's gold and silver market price action.

Let's key in on the exact time that Powell was making his inflation great nation 2020s speech.

Oh, and look, both monetary metals shot straight up to start the speech, only to get slapped backward straight down by the highest volume trades in both respective metals over the last three months. 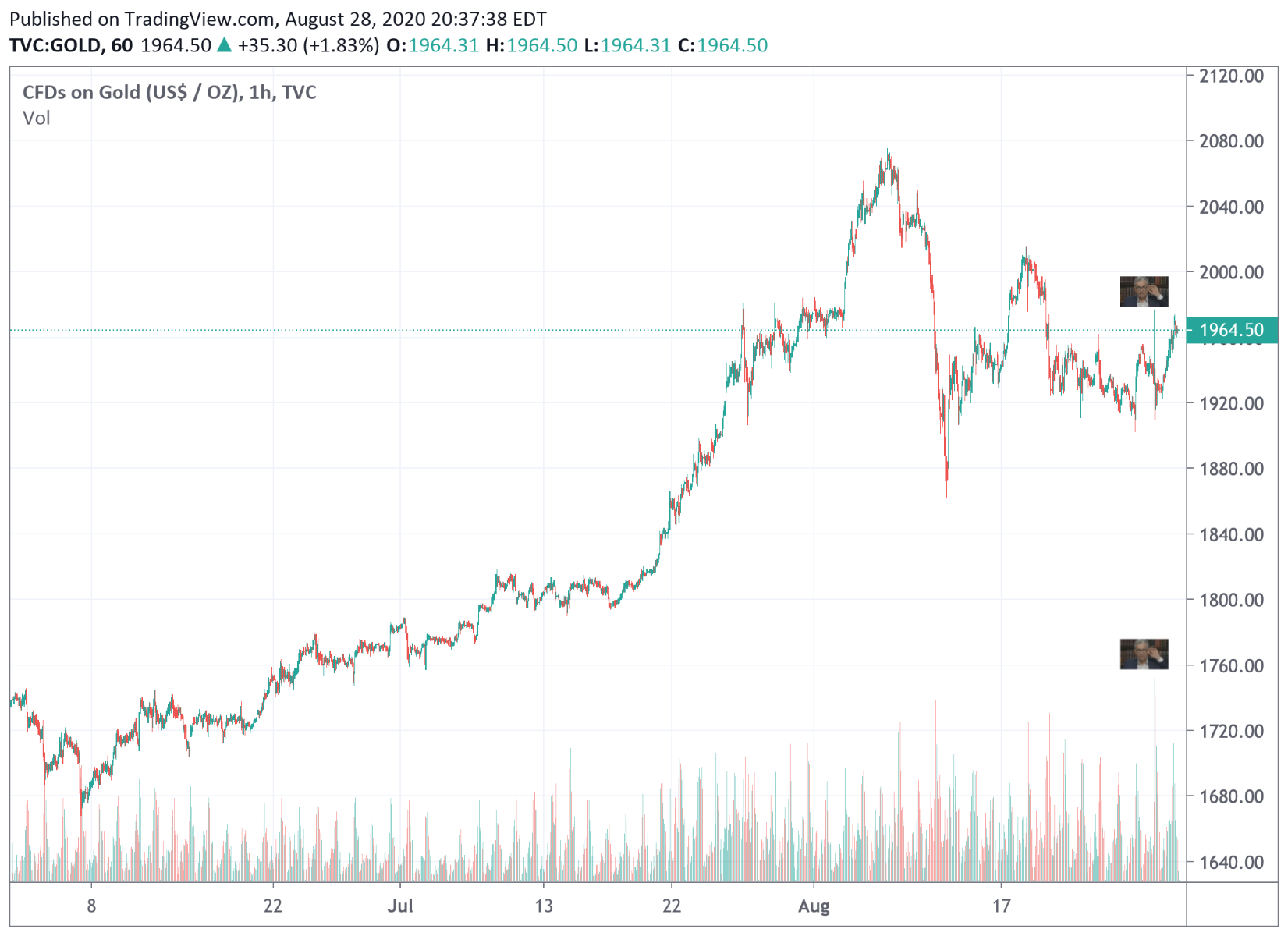 COMEX We Still Have Problems

51 LBMA approved gold refineries have been added to the eligible brand list for the COMEX 100 (GC 100) gold futures contract. These 51 different refinery brands are listed directly under the existing refiner list with a subheading of “(Added as of 27 July 2020)” There were 69 brands on this list before 27 July. There are now 120 current brands on the GC 100 gold list.

65 LBMA approved silver refineries have been added to the eligible brand list for the COMEX SI (5000 oz) silver futures contract. These 65 additional refinery brands are listed directly under the existing refiner list with a subheading of “(Added as of 27 July 2020)”

No word yet on how many of these LBMA approved silver and gold refineries will turn into blood gold refinery scandals in the years upcoming.

It now looks like the COMEX is reaching the Far East for any bullion bars they can get to come back here to the western world now that the gold price is about two times the price it once was when the Chinese were buying gold bullion hand over fist (see this 2015 gold refiner interview).

Next week we should again have a massive stopped COMEX silver contract number to report here.

As we get ready for inflation to rage further this decade, we should also expect sea changes in fiat currency creation as the current dominant monetary regime likely shifts dramatically.

Till next week, take good care of yourselves and those that you love.