Indeed for decades now, the government and its central bank partner (the Federal Reserve) has underreported price inflation systematically.

Anyone not eating iPads and shopping for shelter, food, higher education, health care, etc... can confirm this.

It is in the government's interest to underreport real price inflation.

Mainly because of the +$200 Trillion USD debt and unfunded liability pile they have helped build in this economy.

True data analysis, using real world price inputs, reflect that current price inflation and over the last 5 years has been running at just under 10% per year in the USA’s largest 50 major cities.

The following chart below uses more accurate 1980 methodologies to deduce real interest rates. It fully covers the full fiat currency era, beginning in 1971 with Nixon’s closing of the Gold Window and the prior collapse of the failed gold price rigging London Gold Pool.

The pink line is key in understanding this chart. 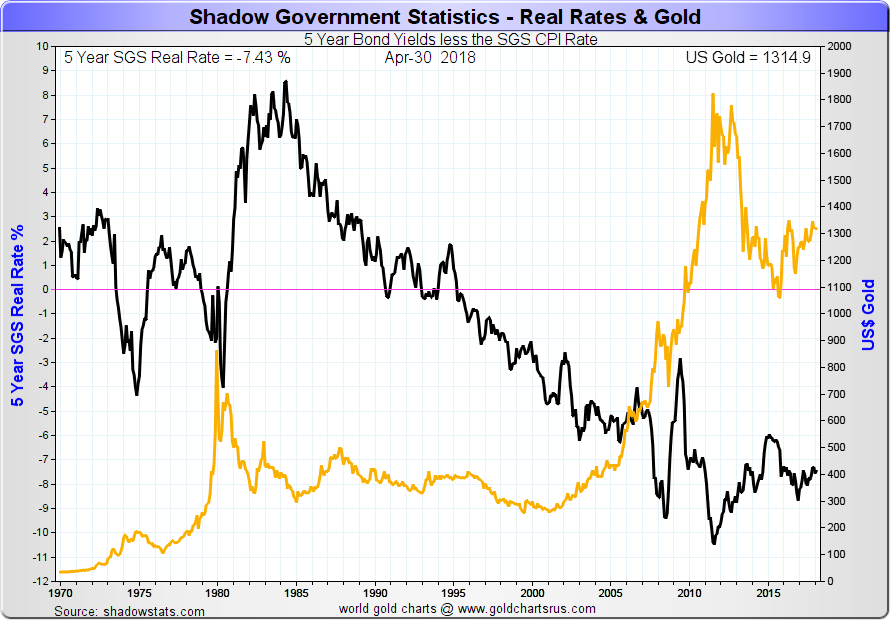 Above the pink line, US bonds are paying investors and capital higher yields than true inflation, thus many investors drop Gold and get the yield with bonds.

Below the pink line, US bond yields are losing to real inflation, thus many investors go to Gold bullion over bonds.

Last time former Fed head Paul Volker, was able to squash the Hunt Brothers as an example to all precious metal COMEX gold longs, then he proceed to jack up interest rates above the critical pink line in the chart above.

This led to powerful bull early 1980s bull market in the US dollar’s purchasing power vs other fiat currency values. Then to the 1985 Plaza Accord where central bankers agreed to drop the dollar’s value vs other fiat currencies and ultimately this all helped lead to the further financialized economy we now find ourselves living in.

Financial analysts today are currently wondering what amount and at what level will Federal Fund Rate hikes will blow holes into the stock, housing, bond, currency… the everything bubble (precious metals and commodities the seemingly lone undervalued asset classes today).

Given our world’s unprecedented debt burdens (now $237 trillion), we cannot have a significant rise in interest rates without knocking over most asset markets (and likely bringing heavy further bids to bullion values).

Thus either default on our debts (not happening, we’re not Argentina) or the US dollar (and virtually all other fiat currencies) will have to be drastically cut in value to meet the nominal promises that have been made in the decades to come.

To conclude here is Christopher Aaron of iGold Advisor discussing the rising interest rates hurt gold misdirection line and how the gold price has responded since the Fed began raising all time low interest rates over these last few years.

Next time you hear someone say rising rates hurt gold, you'll know you are indeed hearing dumbed down nonsense.