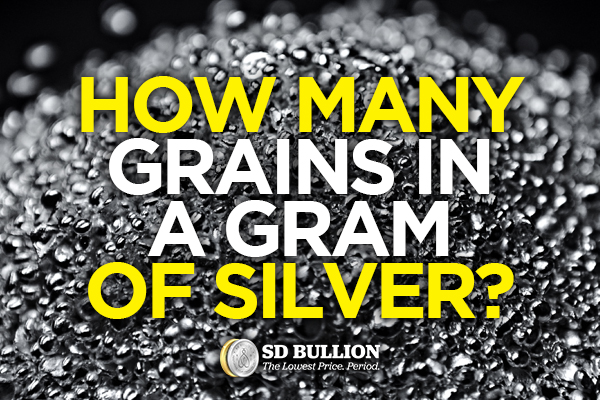 How Many Grains Are In a Gram of Silver?

Over the years, we have seen people come up with different ways of measuring the amount of silver bullion in their possession. A grain is one such unit of measurement. Although this unit isn’t that common nowadays, it’s still something that every precious metals enthusiast should be aware of, just in case you come across products that use grains to measure the quantity of silver in it.

When converting from the metric system, one gram (1g) of silver is equal to 15.43 grains.

History of Grains as a Unit of Measurement

Even though we don’t know when exactly grains came to be a unit of measurement, its origins can be traced back to early Mediterranean traders. They used grains of wheat or barley to define different weights. However, because these weights could be highly variable, they were far from any sort of reliable standard.

Even today, it is nominally based on the mass of a single ideal grain of a cereal like wheat or barley.

A decree from the British Royal Monarch recorded the first official standardization of this measure. It declared the following conversions that were to be followed under the imperial system –

“By consent of the whole Realm the King's Measure was made, so that an English Penny, which is called the Sterling, round without clipping, shall weigh thirty-two Grains of Wheat dry in the midst of the Ear; Twenty pennies make an Ounce; and Twelve Ounces make a Pound."

But these weights are not the same as the troy grains we see commonly used to measure precious metals weights. The pre-1527 English system of weights was called the Tower Pound system, and grains were called Tower Grains. This system was abolished in 1527.

The implementation of the international yard and pound agreement of 1959 defined the troy grain (gr) as precisely 64.79891 milligrams. In British Imperial units, there are 7,000 grains per avoirdupois pound, and 5,760 grains per troy pound or apothecaries pound. As you can see, a grain is the only unit of measure that remains equal across the troy, avoirdupois, and apothecaries’ systems of mass.

Physical troy grain weights adhering to these standards were sold until as recently as the early 19th Century.

Any mentions of ‘grains’ on silver products today refers to the troy grain under the imperial system. Hence, you can rest assured that for every grain of silver you buy, you get 64.79891 milligrams of silver.