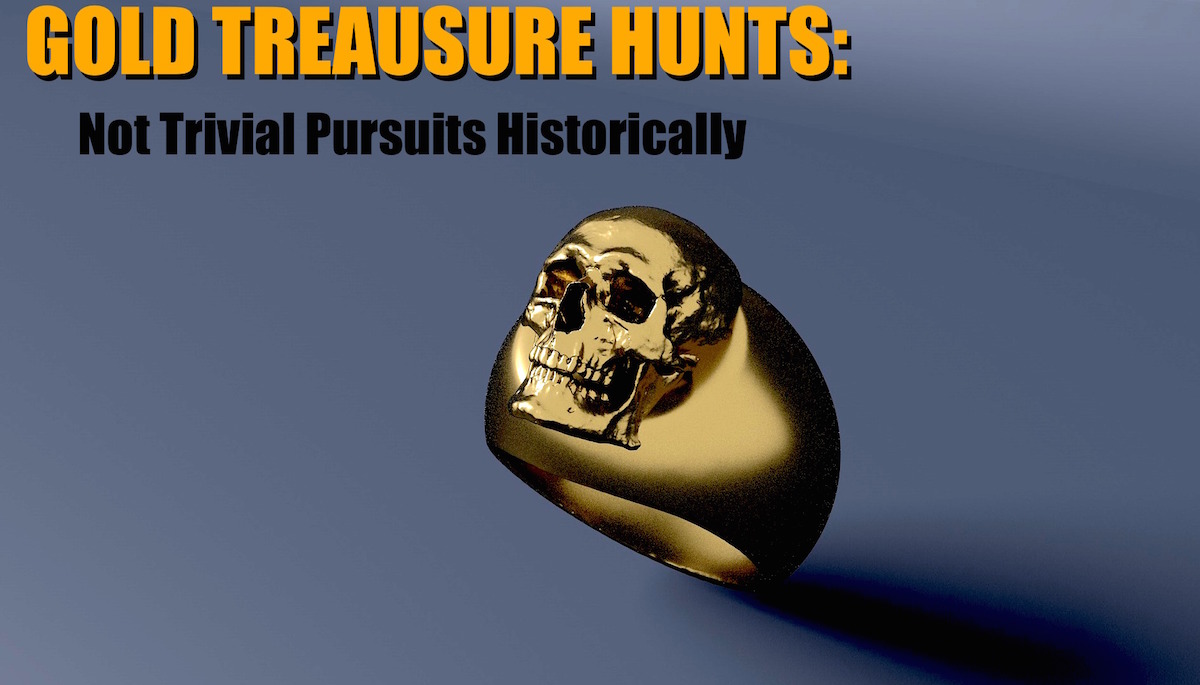 In our current era of peak currency debasement, perhaps it is fitting that we also debase the very concept of gold treasure hunts.

The yearning for savings well more than one might need ever to consume, is undoubtedly as old as human’s desire for gold savings itself (some +6,000 years and counting according to historical artifacts).

Countless humans have spent their lives hunting down gold treasures and other precious metals. Such was a significant impetus for world-changing events, for example, the 16th century’s exploration of the new world from where most of you are reading these words.

Or for the myriad conquests and violence that the Mongolian dynasty reigned upon Eurasia for more than a century. Much was in the search for gold treasure and ‘might is right’ conquistador profit.

Even a brief look at the gold price history tells us much more about our past and present than perhaps how much is the fiat US dollar worth today versus the fiat Euro currency, for instance.

Slaves forced to mine gold at the point of a knife, pirates robbing gold treasures in opens seas, governments across millennia invading one another for their gold hoards. All usual stuff by historical standards and can often why events went the way they did.

Even our own nation’s Civil War had a large amount of greenback and gold treasure influence, most specifically as to which side was able to outlast which, especially in the financing department.

Gold is a financial first precious metal. The consequences of who has the most gold treasure in massive monetary defaults and global fiscal rule changes have shaped much of the course of modern history and global financial affairs to date.

And while the following idea may sound like fun, it could very quickly go sideways as many historical treasure hunts have in the past.

Never mind the myriad potentialities for fraud with the following business model using perhaps one of the last least traceable, proven to endure, monies of humankind.

So what if a few enterprises are running a pay to play raffle contest for some buried bullion?

Never mind if the winner ends up being someone they know or conspired with prior. Who is following up to ensure a level playing field and no cheating post winner announcements?

Common sense suggests banking on getting a few thousand entrants to make the $100k equivalent silver and gold bullion treasure rewards a profitable venture is risky enough. Never mind mixing in any potentiality for fraud or controversy on top of this cocktail of tiny gold treasure hunt ‘fun’.

As for historical large scale gold treasure hunts, no one does them as loud and large as governments have.

Governments have often risked their citizenry’s lives en mass to seek and uncover buried gold treasures either through conquest, advanced spying or via honest capitalistic achievements (selling more goods and services then they buy and saving in gold bullion).

The United States’ record sized +20,000 ton, gold bullion hoard position following the last World War is an example of what happens when a country provides much of the weaponry used for war in exchange for gold bullion payment inflows.

The fiat US dollar’s reserve currency dominant status today is still the beneficiary recipient of that former substantial gold bullion holding and national infrastructure still intact position in the 1950s.

Nevermind that current gold price manipulation is an ongoing documentable fact. Let's go back in recent history to see how severely valuable gold is in humanity's historical affairs.

In possibly one of the most significant movements of gold at one point in time, much of then Britain’s official and freshly confiscated citizenry’s gold was shipped to Canada for safekeeping during the Second World War. The reason was mostly to preserve Britain’s ability to carry on their defense even if Nazi Germans had somehow eventually invaded Great Britain by land and foot.

On the other side of the world, another axis power, Imperial Japan, was busy invading various Asian nation-states taking all the gold treasure, captive slaves, and loot they could potentially use in their war efforts.

In fact, in 1937, the most massive gold bullion robbery at one point in history occurred during the Japanese sacking of the then Chinese capital city of Nanjing (6,600 tonnes of Chinese gold stolen in a few weeks of Japanese ransacking).

Often today, TV channels like History Channel dramatize modern-day treasure hunters with mindless reality shows with treasure hunters that are not necessarily risking life and limb to acquire bullion hoards. In our recent past, very literally the failure or success of one's war and national existence coincided with how much gold one had within their treasury.

Our belief is in the extended scope of history; it is this more recent trivialization of gold treasure hunting that will be seen by our progeny as temporary.

The mantra of those “who have the gold, make the rules” is unlikely to become obsolete given the critically historical role that official gold bullion reserves have in monetary rule changing. Both Russian and Chinese authorities know this if one merely monitors their actions. Perhaps it is not until the fiat gold price points climb again that the west will rediscover the long game afoot.

By keeping the longer lessons of history in mind, it still makes common and backtested mathematical sense to keep a portion of one’s wealth in precious physical metals (gold allocation studies show this).

For ultimately, bullion in hand is one of the lone assets one can own whose sole significant risk is that of outright theft or confiscation alone. It shall always maintain high value come what may.