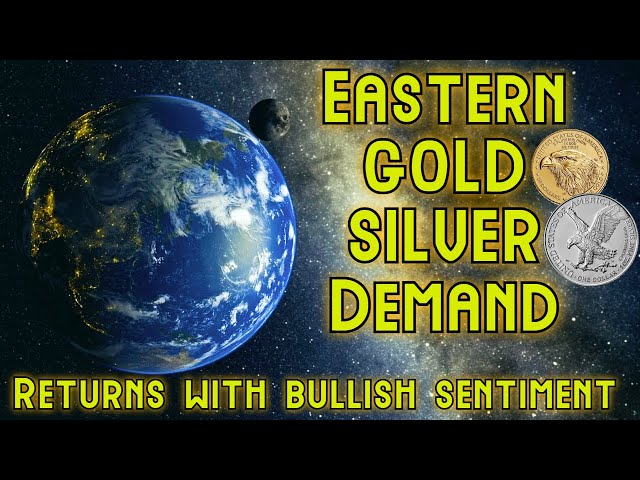 The world's largest eastern bullion buyers are waking from their pandemic slumbers as western efforts to bring absolute transparency to the silver price and gold price discovery continue failing and falling on their faces. More on that story later.

Great news this week as I've returned fully to my desk after a short few days touring the Pan-Americana countryside. Meanwhile, the fundamentals, trading price action, and market sentiment for silver and gold have turned for the better.

To start this week, we'll lean heavily on many of Daniel March's latest physical bullion flow tweets, so I can further explain what has been happening.

First, watch what the aggregate central banks do and often ignore the narrative games they play.

Central banks are on pace to collectively break their record 2019 gold bullion buying this year, 2021.

And now, Poland is gearing up for another 100 metric tonne gold bullion buy to begin 2022.

The Chinese Shanghai Gold Exchange is delivering gold bullion at volumes not seen since before the pandemic kickoff to start this decade, the 2020s.

Silver Squeezers and silver bullion bulls out there buck up. The Indian silver demand gorilla of the 2010s may be returning as Metals Focus reports that over 400 metric tonnes were imported into India in September 2021 alone.

Here is where that amount stacks up to the way India bought silver bullion in the 2010s. If and when the Indian nation returns to its average 172 million ounce silver demand levels in this decade, the 2020s, good luck, London, and unsecured ETFs like $SLV and $SIVR changing your prospectuses yet again.

Quickly, this is a reminder. Remember history, knowing the nature of how bullion bull markets with increased prices behave; eventually, increasing demand for near-record high gold prices bleeds over into undervalued silver.

When the increasingly less poor Indians on the street see gold's price climbing a curved wall, expect many of them will switch their buying preferences to silver, and the import demand levels to increase sharply for Indian silver flows ahead.

Let us move on to the idiocy that is the inflation narrative con game ongoing.

Long-time silver bull Bill Fleckenstein pointed out how stupid this Bloomberg Opinion headline is; underreported escalating inflation hurts average US citizens and is a crime ongoing for anyone who bothers to look. Actual price inflation is likely running at double digits if we simply take into account the actual escalating prices on rents and housing prices in the USA.

The rigged US gov't's Consumer Price Inflation data has yr over yr shelter price escalations at a laughably low 3.2% increase. But just a few cursory glances at data, and we know that's a lie.

Even the cost-of-living adjustment for Social Security is going up nearly 6% for 2022 as the poorest amongst us often suffer the most under high inflationary regimes.

But don't worry, the narrative gamers at the fiat Federal Reserve have no shame as their lies get exposed for all to see, yet again.

Anyone who thinks high inflation is not the primary tool for defaulting on our record debts and not saved for liabilities still, I have a bridge down in the Florida Keys to sell you.

Tyler Wall, CEO of SD Bullion, was on the Yankee Stack channel yesterday with a big announcement for you, our customer base, so be sure to check that link out in the show notes and comment section below. I will also leave it as a click-through video at the end of this week's SD Bullion market update.

So hop on, figuratively speaking. And let's do some more cruising through the most important bullion market updates for this week. Be sure to share this content with those who you think may also enjoy it.

Full transparency, I am recording this SD Bullion market update on the afternoon of Thursday, October 14th, 2021.

Yesterday, Wednesday morning in the US COMEX open, silver and gold had a snapback rally which put the short sellers on their heels and has given rise to some seriously bullish sentiment across the precious metals complex.

This week, it will be interesting to see how both monetary metals can close in their respective derivative price discovery markets. Will gold clear and close above $1800 and the critical $1820 an ounce threshold ahead?

Will silver get beyond $24 oz soon?

The lately building gold-silver ratio head and shoulders formation has given way to a fall back towards the mid-60s and perhaps beyond as we come towards the end of 2021 into 2022?

If we take some of the analog 1970s vs. this 21st Century bullion bull market statements I have made on this channel in months and years prior, now is the time to start the valuation climbs.

The 2.5Xs 1970s vs. this 21st Century bullion bull market analog is calling for gold to make a major move now through next month, November 2021. We shall see if the timeframe overlaps accordingly.

Again, here is a chart I often use here to explain potential timing ahead.

Remember back to the start of this year 2021, and the record media attention freely given to the bullion industry by the likes of Bloomberg and CNBC as the Reddit #SilverSqueeze got underway late in late January.

Well, a draining of the COMEX has since ensued steadily after that.

The registered amount of available underlying fractional reserve COMEX silver bullion is now under 100 million ounces, down over -50 million troy ounces from its peak before the silver squeeze start.

The Wall Street Silver subreddit now has over 160,000 members and growing. With rabid members committed to figurative wage war this decade by stacking silver bullion for the long haul.

One of the creative members of the silver squeeze clan, Creflo Silver, points out that it would only take a bit over a mint case of silver bullion delivered to every of the current 160 thousand WSS members, around 618.75 ounces of delivery, to suck the COMEX dry of its currency registered silver bullion pile.

Think back to the start of this week's SD Bullion Market Update video start. Ponder what happens if and when Indian demand returns to its former 2010s levels; combined with that current, there is not much silver bullion to go around the fact.

As well too, while having idled of late, Sprott $PSLV stands ready to take on new inflows and begin jacking up its silver bullion ounce holding levels as the months and years progress.

And, of course, we are not the only ones turning blue in the face with silver bullishness.

Have a read on some of his latest thoughts. First, about not pitting against one another over silly bullion vs. crypto arguments while flashing the mega long-term silver chart cup and handle that is building.

Also, he states that a $48 oz silver "moon shot" is on his silver point-and-figure chart.

Bitcoin $BTC or Gold $GC_F & Silver $SI_F
The debate should NOT be PMs vs crypto. That's a stupid debate.
For the record, I am extremely constructive on Silver (and $BTC). Being an outspoken bull on Silver is NOT hate-speech against $BTC
Binary thinking = stupidity
Own both pic.twitter.com/EDxHsJ6AJj

Transitioning now to a story we jumped on top of right before we began this SD Bullion YouTube channel.

The NY Federal Reserve's REPO loan fiasco from September 2019, some of the loan data from that month just came to light thanks to the great work by pam and Russ Martens over at WallStreetOnParade.com.

And while it does not surprise the megabank and fiat financialized institutional names involved in the overnight lending fiasco that has escalated since.

What is surprising is the size and scale it has mushroomed into since September 2019.

Pause here for a moment and a warning. It’s funny how the respective seemingly lawless City of London-based custodians for the world's largest silver ETF SLV (JPMorgan) and the world's largest gold ETF GLD (HSBC) shunned bringing potential transparency to opaque silver and gold derivative markets they often dominate via outsized concentration. Not in their interests?

Suppose you own either SLV or GLD for the medium or long haul. Go read their respective +50 page prospectuses, know with a share in either of those two derivatives you legally own no bullion and learn what the legal term "unsecured creditor" means for when and if things go wrong with either trust.

Back to finish reading you all this article in our video embedded above.

Here's hoping you out there have taken advantage of recent price weakness to build a prudent bullion position, as we are possibly heading to a bullish close for this year 2021 and onwards into 2022.