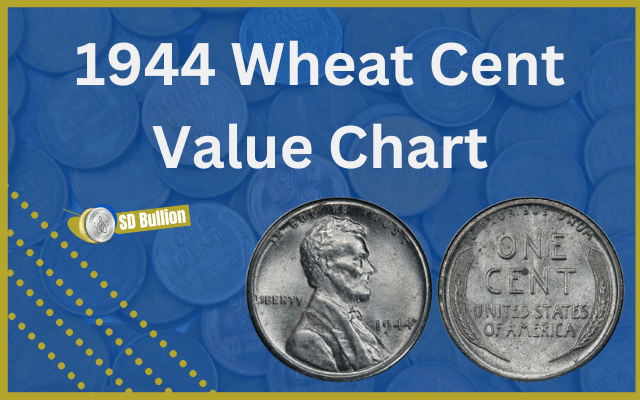 The 1944 Lincoln Wheat Penny is a cent designed by Victor David Brenner. It was well known as the return of copper to the Lincoln cents due to the unpopularity of the 1943 penny made of zinc and steel.

1944 was a new year for the Lincoln pennies using copper. But, they were not like the ones produced between 1909 and 1942, made of copper, tin, and zinc. The 1944 wheat penny had only copper and zinc in its composition. Because tin had become limited, it was removed from the composition of the wheat cents between 1944 and 1946.

It is important to note that in 1944 the US Mint created more than 2.1 billion pennies, which was a record at the time. That makes the 1944 Lincoln cent one of the most common wheat pennies there is. It was only surpassed by the 1960 Lincoln Memorial cents.

History of the 1944 Wheat Penny

The 1944 wheat penny came as an answer from the government to the criticism the 1943 one-cent coins received. People disliked its zinc-coated steel composition and dime-resembling design.

In 1943, copper was a highly-demanded metal in the war effort to manufacture artillery, among other military uses. To save copper, the government changed the composition of pennies to a steel core with a zinc coating. Easy to mistake with the nickel due to its similarity and fast to rust when in contact with sweaty hands, the 1943 Lincoln steel cents were not very popular. These factors led to the comeback of the original copper pennies in 1944.

The return to copper meant an easily identifiable penny made of 95% copper and 5% zinc. These coins had no tin, which technically meant they were produced with brass, not bronze. The results were still much better than last year’s when the War Production Board refused to give the United States any copper and forced them to use Lincoln cents from zinc-coated steel. 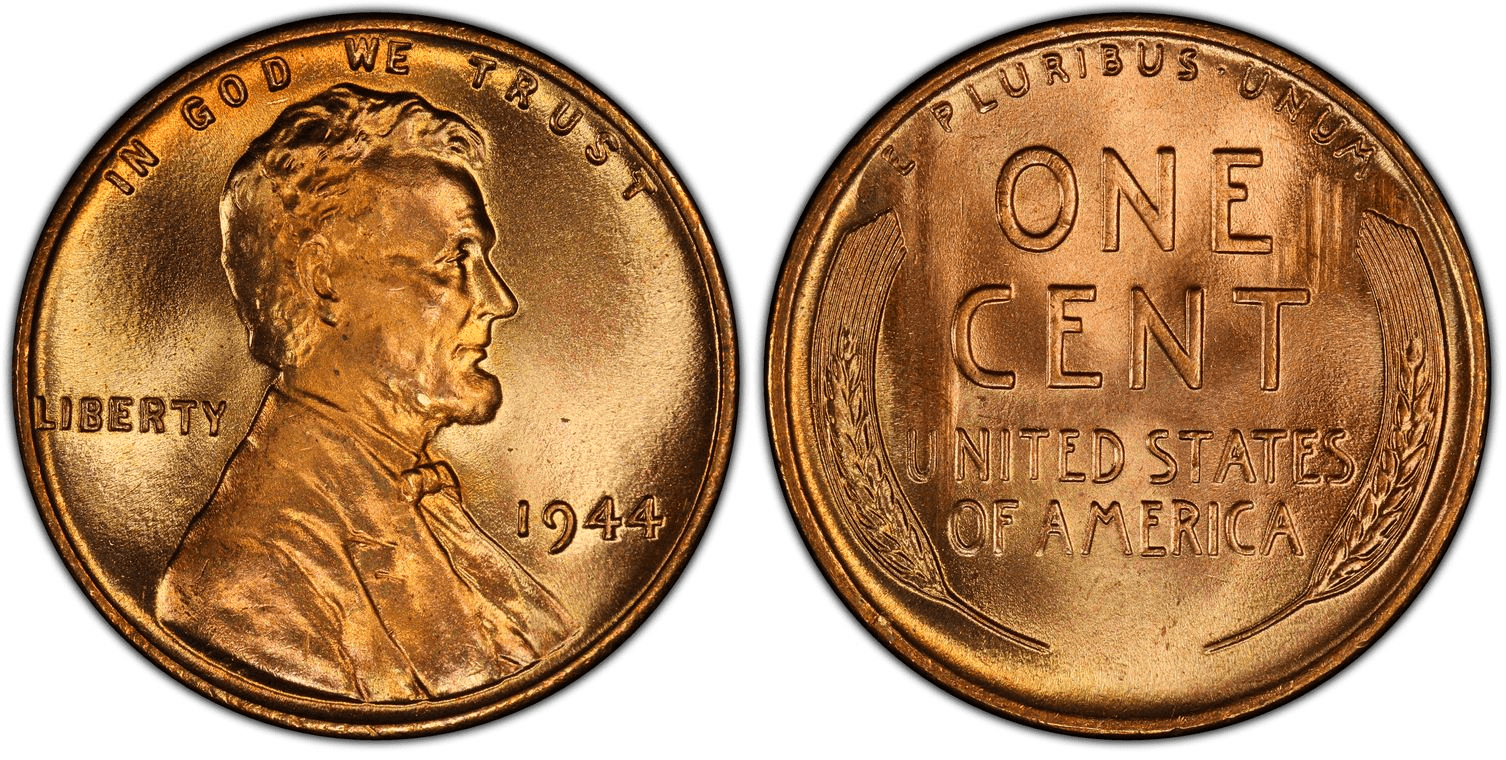 To confirm the authenticity of a 1944 Lincoln cent is important to observe some features of this coin. The first feature to observe is the portrait of Abraham Lincoln's profile on the obverse. The year 1944 is stamped on the right side with the mint mark "D" (Denver mint) or "S (San Francisco mint) down below. The ones from Philadelphia mint bear no mint mark. On the left side of the image, the word LIBERTY is engraved, and on top is the motto, IN GOD WE TRUST.

On the reverse side, there are three inscriptions. Right in the middle is the denomination ONE CENT right above the name of the country, UNITED STATES OF AMERICA, and on the outer rim, on the top, the Latins inscription E PLURIBUS UNUM.

There is a discussion on whether the use of shell casings in the production of 1944 pennies is a myth. Many people believe shell cases were used as an urban legend for coin-making as they are considered patriotic publicity stunts. But, it is known that thanks to the war, the supply of copper increased due to the recycling of the shell metal used in ammunition, and it could be used in wheat cents manufacturing. According to Roger Burdette, the greatest numismatic scholar of all time, the National Archives documentation confirms that fact. For instance, there are reports describing railroad wagons packed with bullet shells arriving at the Philadelphia Mint.

Although the mintage of the 1944 wheat cent was one of the largest for that denomination, a series of conditions can raise its value to even five digits. For one, the 1944 wheat penny, even the regular strikes, are some of the most desired coins of all Lincoln Wheat Pennies. It is a key date to collectors due to its history and connection to the World War II. This appeal to collectors is what we call numismatic value. However, the condition of the coin is also of utmost importance. Though a worn-out specimen won’t bring you great profit, one 1944 Wheat Cent in mint condition could be worth up to $13,000!

However, one variation of the 1944 Wheat Penny can be worth as much as a pot of gold. That is the 1944 Steel Penny. 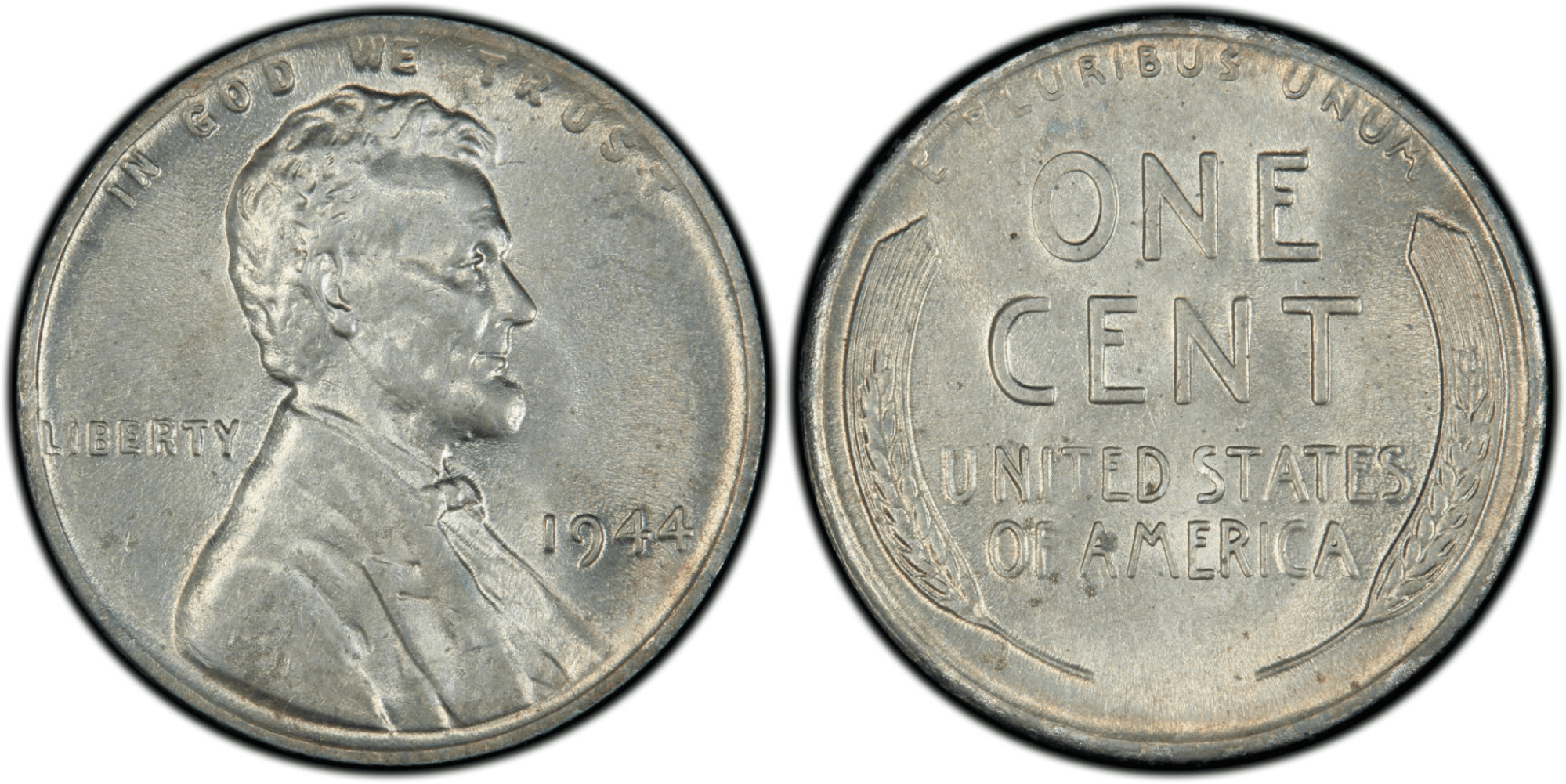 After the change to copper in 1944, the US mint had some leftover steel blanks from the year before in the hoppers. These incorrect planchets ended up in the pressing machines resulting in a handful of steel pennies bearing the 1944 mint year. That kind of minting mistake is called a transitional error.

These error coins made of steel instead of copper hold a silvery color. Because of that, they are called "Silver Pennies," although they are not real silver coins, just zinc-plated steel like the ones from 1943. Nowadays, less than 50 specimens of the 1944 steel pennies are known to exist, making them very rare and valuable pennies.

Most of these steel wheat cents come from the Philadelphia Mint and bear no mint mark. However, 7 of these steel treasures have a “D” mint mark from the Denver Mint and 2 more the “S” from the San Francisco Mint. That last one is the rarest and most valuable of the set.

Funny enough, the same sort of error occurred the year before. Some leftover bronze planchets were accidentally used in 1943, resulting in the also incredibly rare and valuable 1943 Copper Penny. 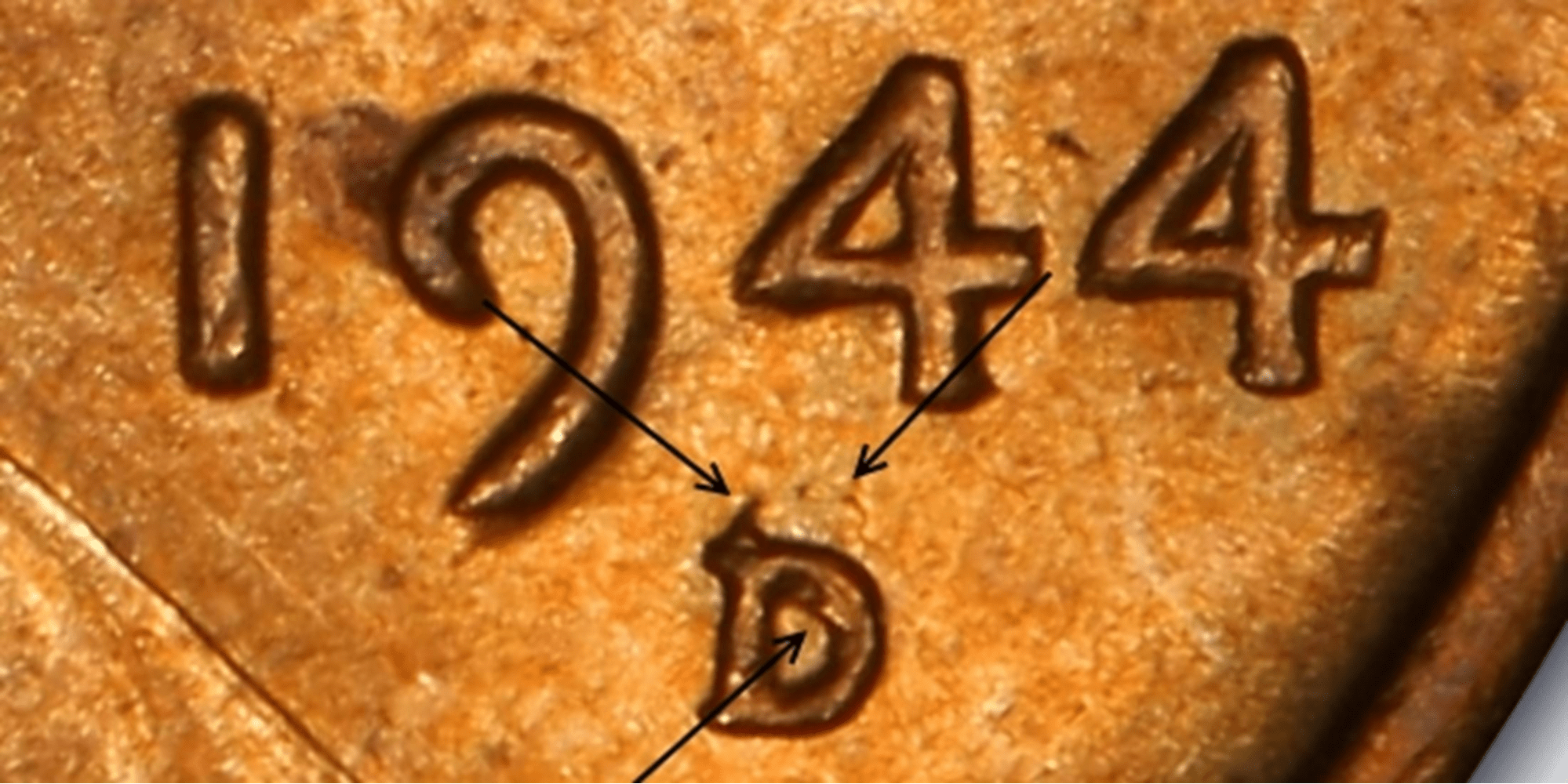 Another error coin from the 1944 batch that could be worth thousands of dollars. Though not as rare as the Steel Cents, the 1944-D/S Wheat Cents result from an error related to the mint mark that greatly influences these coin values.

Some of the 1944 Lincoln pennies produced in Denver were made in a die with an “S” from the San Francisco Mint. On those error coins, the S was cleared out, and a D mint mark was placed on top of it, but traces of the mistake can still be found in some of them. A sample of these coins, still with its “reddish” coloration and highly graded in mint condition, can cost up to $57,500.

To determine how much the 1944 wheat penny is worth, it is important to consider its color designation and the coin's condition. The coloration of the coin can be labeled as

The MS (Mint State) is for coins certified in Uncirculated Grades. They are the most valuable and desired ones. Mint State grades can vary from MS60 to MS70 for a perfect coin. The "+" sign is an indication that the coin is in between two levels on the scale. For instance, an MS67+ will be pricier than an MS67, but less so than an MS68.

The Price Chart above is updated according to PCGS's Price Guide and population.

There are two things to consider; magnetism and weight. A steel cent sticks to a magnet and is lighter than a regular copper coin. A steel penny weighs around 2.7 grams.

It depends a lot on the average circulated condition of the coin. A coin dealer can determine accurately how much your 1944 wheat penny can be worth once they use tools like a magnifying glass to check its actual state, and they are always aware of the market updates. But the chart above can give you an idea of prices, going from $6 for an MS63 to $9000 for an MS68.

It is not recommended to deep clean any old coins. For instance, it can potentially damage and reduce some of its value when in contact with chemical products or brushes. If it is covered by clay, a pure water gun is enough, and let it dry on a soft cloth.

The rare and desired by most collectors pennies are those with clipped coin errors, mint mark errors, double strikes, and of course, the 1944 steel cent known as the silver penny. Regular 1944 wheat pennies are not rare because they were minted on a large scale, so they are very common today.