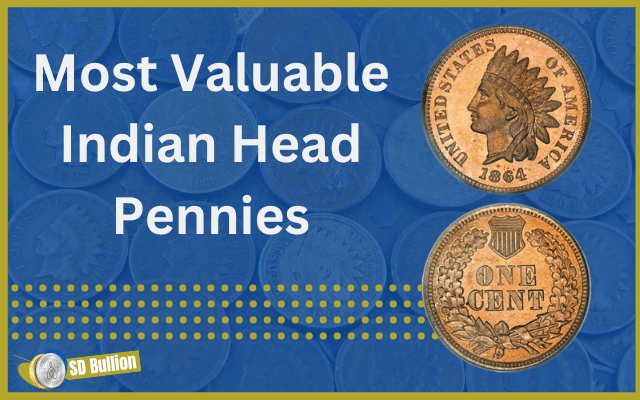 Indian head pennies are almost as old as the United States. The US Mint has been producing coins for internal circulation since 1793. In fact, the cents were their first circulating coins ever released. Since then, many different designs have stamped the faces of the beloved penny. The Indian Head Penny, as you will see further in this article, is a great example. It is one of the most popular designs in the series of small cents between numismatics and collectors.

The United States Mint first introduced the one-cent coin in 1793, along with the half-cent coin, produced by their newly established refinery in Philadelphia. That first one-cent coin was made of pure copper and had a diameter of 1⅛ inch (22.57 mm). It was almost the size of a half-dollar coin, and they came to be known as the large cents.

Between 1792 and 1862, the United States accepted gold and silver as legal tender. In the late 1840s and early 1850s, the discovery of gold in California led to an inflation in other precious metals, including copper. For instance, the Mint director James Ross Snowden noted through his annual report that the cost of producing copper coins like the half-cent and large cents was not compensating for the expenses due to the value of copper.

This was not the first, nor the last time the price inflation for copper led to a change in the one-cent coin composition. In 1943, driven by the copper demand in the World War II efforts, the US Mint produced steel cents for one year. That alloy change caused one of the rarest and most expensive transitional error coins in US history, the 1943 Copper Penny.

In 1857, though, with the increased production costs for the cent and the half-cent, the US Mint rushed to look for alternatives and discontinued the half-cent altogether. They also changed the composition of the one-cent coin to 12% nickel and 88% copper and reduced its size to 0.750 inches (19.05 mm). The diameter is still used nowadays for the denomination, although current pennies are slightly thinner.

In addition, a new design was issued for circulation in 1857, the Flying Eagle cent. Philadelphia Minting Chief Engraver James B. Longacre created the depiction. He based the eagle in flight design on his predecessor's work, Christian Gobrecht. The reverse featured the denomination encircled by a wreath. 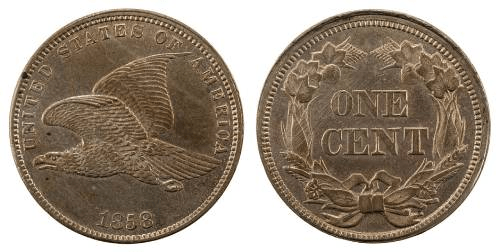 The nickel composition made the coins look brighter than the previous issue. For that reason, people called it the “White cent” or “Nicks.”

The Flying Eagle Penny was produced from 1856 to 1858. Until then, only large cent coins were in circulation. However, production difficulties forced the Mint to quickly replace them in 1859. Longacre was, again, the designer for the new coin, which received the moniker of Indian Head Penny.

The new obverse featured the goddess Liberty wearing a native american headdress. The words “UNITED STATES OF AMERICA” encircle the portrait, with the mint year below. A numismatic tale suggests that the facial features of Lady Liberty wearing the feathered tiara were based on Longacre's daughter.

The coin's visuals can be controversial for a few reasons. First, the obverse design shows a caucasian woman wearing an Indian headdress reserved for only native american men that must have earned a place of respect within their tribe. But beyond the historical inaccuracy, the Indian head pennies were issued when the native americans had to leave their ancestors' lands. A background that can suggest some tactlessness towards Native American past.

However, the artist responsible for the coin's design justified his artistic choices:

"From the copper shores of Lake Superior to the silver mountains of Potosi from the Ojibwa to the Aramanian, the feathered tiara is as characteristic of the primitive races of our hemisphere as the turban is of the Asiatic. Nor is there anything in its decorative character, repulsive to the association of Liberty … It is more appropriate than the Phrygian cap, the emblem rather of the emancipated slave than of the independent freeman, of those who are able to say “we were never in bondage to any man.”

I regard then this emblem of America as a proper and well-defined portion of our national inheritance, and having now the opportunity of consecrating it as a memorial of Liberty, ‘our Liberty,’ American Liberty; why not use it? One more graceful can scarcely be devised. We have only to determine that it shall be appropriate, and all the world outside of us cannot wrest it from us."

The reverse showed a similar laurel leaf wreath with the denomination on the center, as it had been used for the Flying Eagle design. The wreath was changed to an oak wreath with a shield in 1860.

Along with this change, the artist added a presidential seal to the top of the coin.

The Indian Head Cent had its highest mintage in 1907 when 108,138,618 pieces were struck. It was the only issue of the Indian Head Penny series, whose production surpassed 100 million units. While the series with the lowest pieces of Indian head pennies is from 1877 and 1909.

Indian Head Pennies were produced both in the Philadelphia and San Francisco branches. These last ones carry a mint mark, the letter “S” on the reverse, below the wreath. 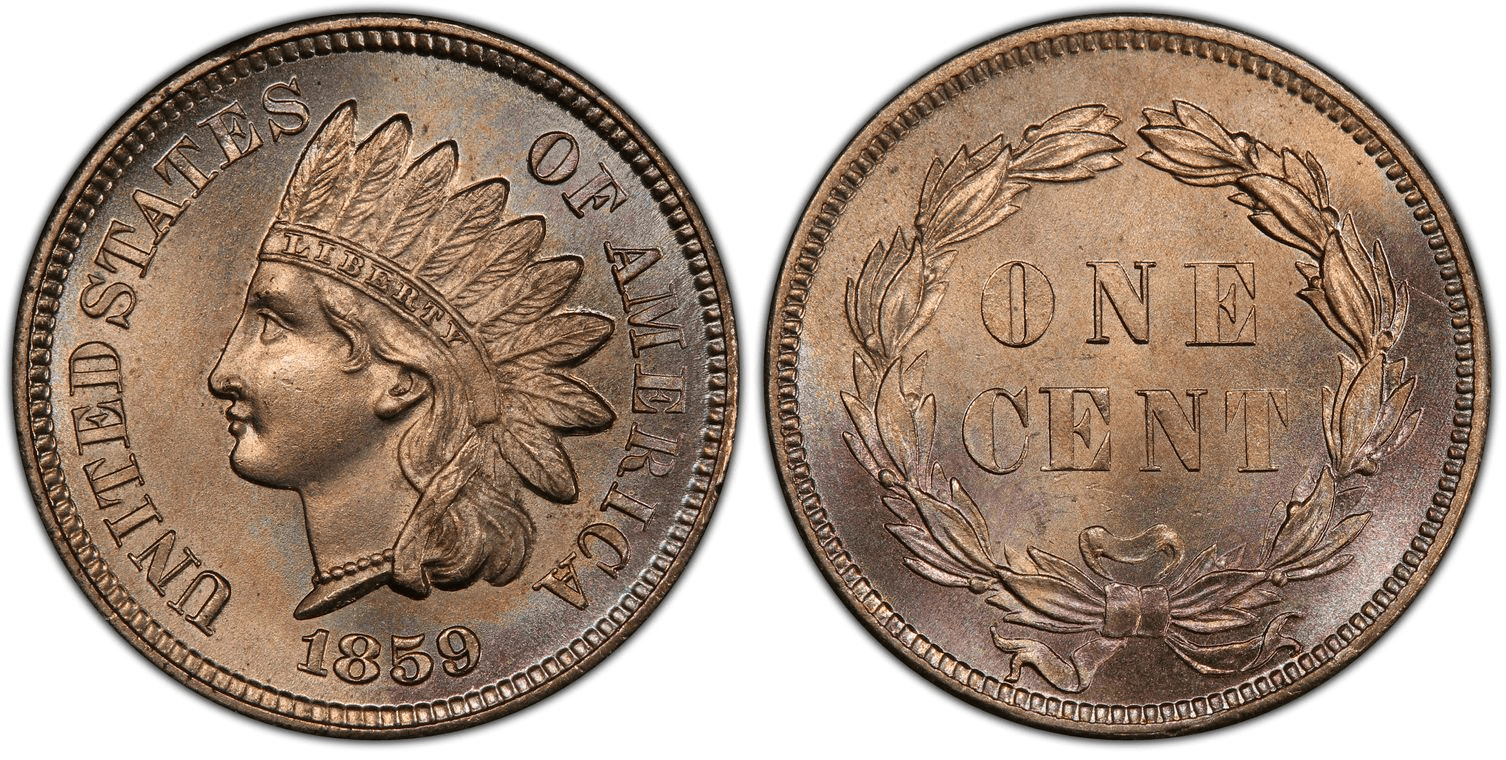 During the American Civil War, demand for nickel increased dramatically to be used in the war efforts. For that reason, nickel prices rose, and people began hoarding copper-nickel cents for their intrinsic value. In 1864, The US Congress passed a new Coinage Act, authorizing the production of one-cent coins with a bronze alloy (95% copper and 5% tin and zinc).

The popularity of the Indian Head penny increased wildly in the postwar years. The US Mint would go on to use the design until 1909, when it was replaced by the Lincoln Cent.

What are the most valuable Indian Head Pennies now?

As the Indian Cent contains no precious metal content (e.g., gold or silver), its value derives from its numismatic appeal as a collectible coin and its historical significance rather than its intrinsic value. First of all, Indian Head pennies, from any mint year, are over 100 years old. Therefore, any specimen found, in any condition, even circulated pennies, is bound to draw a coin collector's attention.

However, it is essential to note that the Indian head pennies' worth depends on their appearance and age. So the better the condition, the better the coin's price. Therefore, a rare Indian Penny in uncirculated condition will reach higher figures than a circulated one with more prominent wear marks.

On top of that, the Indian Head design was introduced shortly before the American Civil War. Many numismatists consider the early issues that circulated throughout the war as part of American history.

See a price guide for valuable Indian head pennies below:

Here are a few key dates and varieties to keep an eye out for if you are interested in coin collecting: 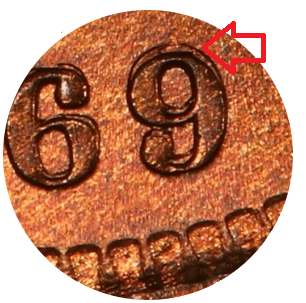 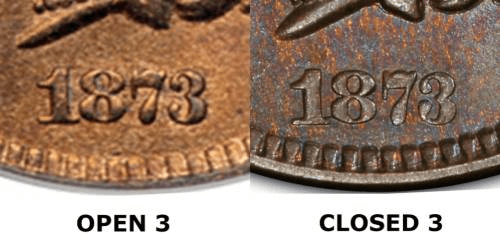 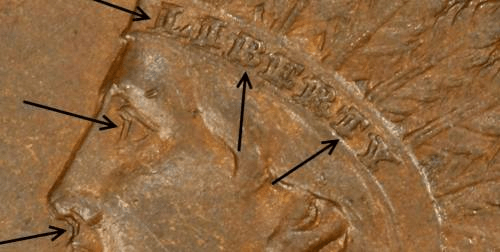 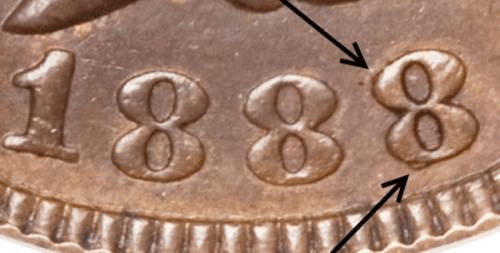 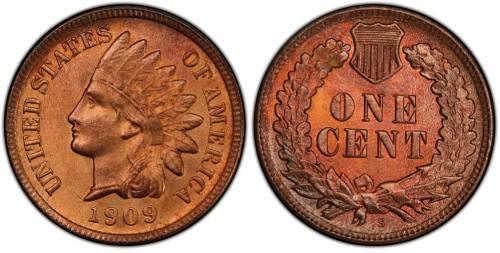 A Rank of the most valuable Indian head pennies, according to PCGS auction records:

If you are one of the lucky people who came across one of these rare finds, take it to your trusted coin dealer or coin authenticator to ensure it is the real thing and not a counterfeit. You can reach out to trusted grading professionals at the American Numismatic Association. You might have found yourself a pot of gold coins.

The Introduction of Wheat Pennies

The 1909 Indian Head Penny was the last design in the series before the introduction of the Lincoln Wheat Cent.

As that was the centennial year of the late president Abraham Lincoln's birth, the US Mint ordered a new design for the cent in his honor. The original plan was to have American sculptor Augustus Saint-Gaudens be responsible for creating the new coins. He sadly passed away before submitting them. Therefore, the US Mint employed the Litvak-American sculptor Victor David Brenner to work on them.

Brenner designed both the obverse and the original reverse. The obverse depicted a portrait of the late president facing right (from the viewer's perspective) with the motto “IN GOD WE TRUST” inscribed on the top rim and the word “LIBERTY” behind his neck. The mint year was placed in front of the president's chest.

The reverse showed the denomination on top of the country's name at the center of the coin, in between two stalks of wheat, hence the name Lincoln wheat cent. Above the denomination is the inscription “E PLURIBUS UNUM”. 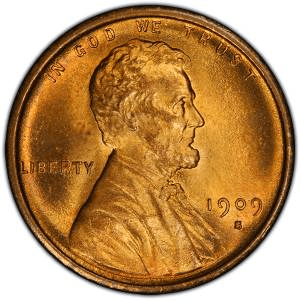 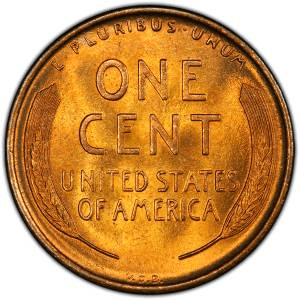 Like the Indian Head Cent, the Lincoln Cent would go on to witness pivotal moments in American history, including the role the US played during World War II that led to the intriguing and valuable 1944 Wheat Penny.

The Lincoln Penny portrayed a variety of designs on its reverse throughout the years and won the hearts of the general American public, but it has not overshadowed the prize and esteem attributed to the Indian Head cent series by numismatists and coin collectors alike.