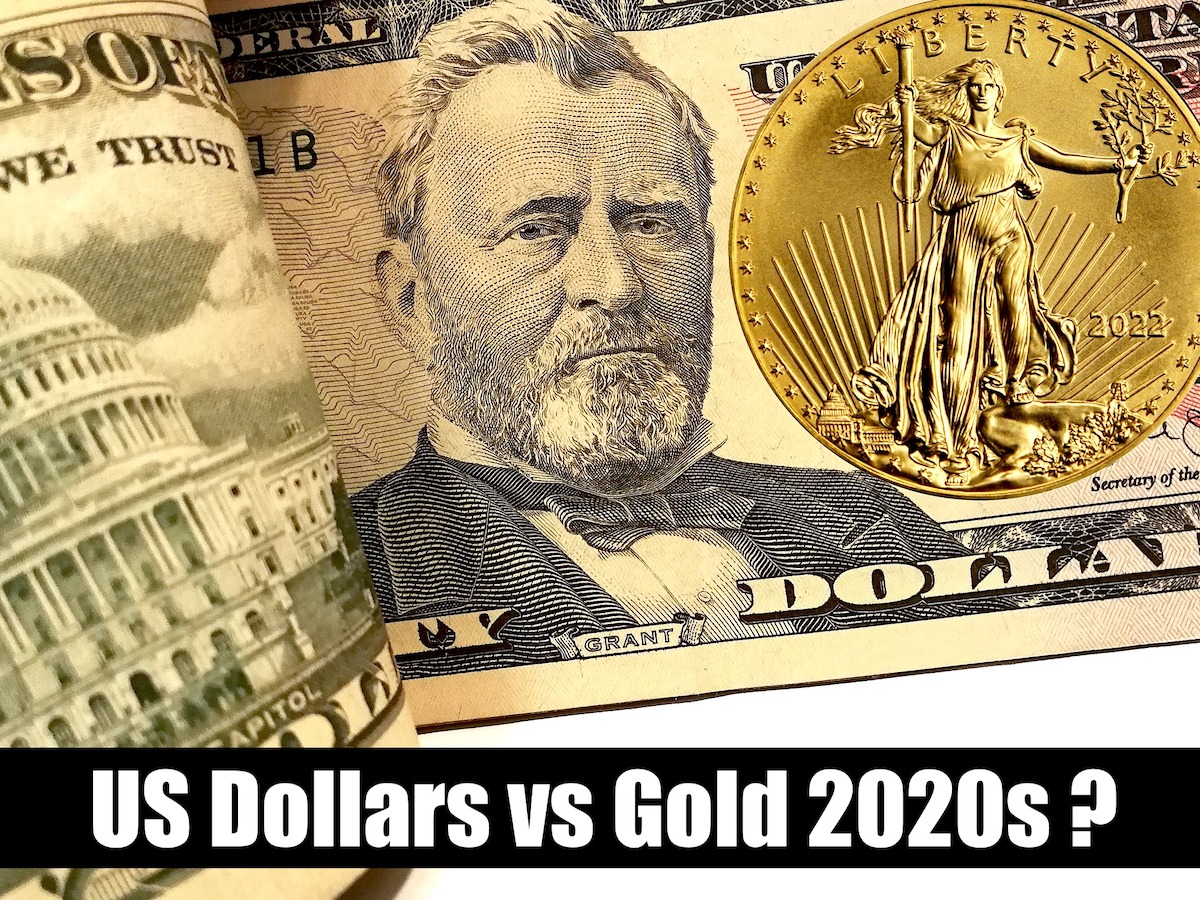 We have written at length about the war and ongoing battles of the fiat US dollar vs gold historical values.

All fiat currencies lose to gold bullion without exception when given enough time.

The question here is how long the current US dollar reserve currency of the world can hold onto value versus gold price history?

In the following video embed, Peter Schiff and Brent Johnson talk about the interaction between the fiat Federal Reserve note US dollar and gold into the next decade.

The video clip begins with the inferior nature of gold bullion vs ETFs or other COMEX futures contract derivatives. This point is a big reason why astute investors have been taking direct physical delivery of gold bullion and storing it within their non-bank gold vault accounts.

Schiff predicts that the Federal Reserve note and its fiat US dollar issuers (e.g., banks create US dollars out of thin air) will ultimately have to decide between saving the fiat US dollar from hyperinflation and or bailing out the U.S. federal government (and underfunded pensions and liabilities ongoing).

In either case, gold bullion and other physical precious metals are positioned to be a haven for investors in the decade to come.

Here is additional information on prudent bullion investment allocation backtest studies over a near 50-year timeframe.

00:18
BRENT JOHNSON: I think a big part of-- most people in the gold world argument is there's a finite amount of gold. But there's a lot of claims on it. But there's only so much physical gold that exists. Right? But then there's the GLDs, there are the futures contracts that aren't really backed by gold, or you know you can't take delivery, the ETFs.

00:35
So a lot of the argument is that when people scramble for gold, there's only so much actual physical that exists that'll push the price up a lot.

00:42
PETER SCHIFF: Yeah. It's going to go up. And of course, you know GLD, that is physical gold because the GLD, the ETF has to buy the actual gold in order to issue the shares. But yes, in the futures markets, there it's a whole different ballgame. Because there, you have people selling gold who don't have it.

00:59
PETER SCHIFF: And people are buying gold that doesn't actually want it. They never intend to take delivery. So you can have this paper market of basically gambling on the price of gold. But yes, a lot of the demand that might otherwise go into real gold ends up going into futures contracts, which is not buying any actual gold.

01:16
But where the problem is going to set in-- and maybe it's not a problem. If you're long gold, it's an opportunity or a good thing. Right? But at some point. A lot of the owners of these futures contracts are actually going to request delivery.

01:31
PETER SCHIFF: Because just because they don't do it now doesn't mean they won't in the future. And at some point, the longs are going to want delivery and the shorts are going to get delivered a notice that says, yes. You need to deliver your gold. Now the shorts don't have any gold.

01:46
PETER SCHIFF: So now they have to go into the market and actually buy it. Well, where are they going to get it?

01:50
PETER SCHIFF: And that's when you have a huge move up, and maybe even bankruptcy of the COMEX Or does it have to be bailed out? Or what's going to happen? Or are the people who are requesting their gold going to be told you can't have it? You know, you're going to get paid in cash. Even though you requested physical delivery, it's not going to happen. So this could be an explosion of real buying of gold.

02:11
And there are a lot of people that own gold. That, oh, it's all manipulated. And all the paper markets are keeping it down. Maybe so, but it can't go on forever. And for me, if they are manipulating it, that means the price of gold is artificially low. That means it's a great buy. Right, we're going to get paid.

02:29
Right, when was the last time gold was really artificially low? It was when the government controlled the price until 1971. It was fixed at $35 an ounce. And then Nixon devalued a couple of times to about $42 before we went off the gold standard. But for years, the price of gold was artificially suppressed. But as soon as that stopped, gold went from, what, $40 to $850. And so I think gold has been suppressed, whether it's an orchestrated plan to suppress it, or just based on market forces of people just doing what they're doing.

03:22
Now, should they only own gold? No. I don't know I never tell people to only buy gold. But people should own gold. They should own some gold. And they should own gold stocks. I mean, these things are dirt cheap. I mean, if you want to look at what stocks can do, look at what gold stocks did in the 1970s. I mean, there were stocks that went up 50, 100-fold. That's going to happen again. All right, so people just have to be in these stocks. Do you have to have your whole portfolio? No. But have some money in these stocks. Most people today have no money in gold, and they have no money in gold stocks.

03:52
BRENT JOHNSON: So using that same kind of analysis that we just applied to gold that there's a limited amount of gold and a lot of claims on it. And at some point, when people call for delivery, it will push the price up. If we do that same analysis on the dollar.

04:03
BRENT JOHNSON: There's only $4 trillion of base money. Everything else is loaned into existence. But we've got $50 or $60 trillion of dollar-based debts in the world. That doesn't include the unfunded liabilities. That doesn't include the derivatives. So if we do get into a deflationary scenario, before the inflationary scenario comes, the stock market starts to crash. And we go start into another 2008-type event. Doesn't that start a daisy-chain of claims on only $4 trillion that exists? And for a short period of time, won't the dollar have those same characteristics that we just talked about with gold?

04:34
PETER SCHIFF: No, because, I mean because dollars, A, intrinsically have no value. But B can be created into existence by the Fed. They can create dollars whenever they want.

04:44
BRENT JOHNSON: But they won't do it until it gets strong, right? If it's falling, why would they create more dollars?

04:48
PETER SCHIFF: Well, in order to prevent rates from rising, and in order to bail out the government. So let's say we do have deflation, and rates start to rise, and the government has to default on the treasury bonds. Is the Federal Reserve going to sit back, and allow the US Treasury to default on the treasury bonds? Or will the Federal Reserve bail them out by buying the bonds themselves? Right, because if the market doesn't want them at artificially low-interest rates, and the Fed-- and the Treasury, rather, can't afford to pay higher rates, the only buyer is the Fed.

05:17
Also, if the government has a choice. Hey, we have these Social Security benefits that we need to pay, but we don't have any money. Where are we going to get this money? Oh, well, maybe we're going to default. And tell the people who are expecting a Social Security check, you're not going to get your check. Or we have all these government workers who are retired. They're expecting a pension. You know, we're out of money. We've got tell them there's no check.

06:06
So gold, we know. If we run out of gold, it's gone. Right. You can't just-- you have to mine it. It's hard to find. Getting it out of the ground is expensive. Right. They can put as many zeros as they want on those dollars. They can push buttons, and create them in infinity. So it's not the same thing. We did have a run--

06:25
BRENT JOHNSON: But leading up to it, until they pushed the button. When people are going to the banks, and there's a run on the ATMs, and they can't get that cash in-- I don't know-- the two days, the week-- the two weeks it takes to pass this bill--

07:10
So we're not in that position now. We're not even close to that position. In fact, if you wanted to look at something that's similar, go back to 2000-2001. Because when we had the stock market bubble at that time, gold had been in a bear market for 20 years. Right, the dollar index was $120 in 2000. And when the US stock market bubble burst in 2001, the dollar went down. Gold went up. So today, we're similar to that circumstance in where the dollar and gold are trading. Right.

07:41
So right now, we're going to get movements into gold and out of the dollar because of just where everybody is aligned. But ultimately, if we get the type of crisis I believe, where the Fed has to allow inflation to rage out of control. Or they're forced to print money into a weakening economy, into a falling bond market, into our inflationary environment. Where gold prices are rising, where commodity prices are rising. That's the end game for the Fed. Because now everybody realizes the box the Fed is in.

08:57
Which is going to be much worse than the '08 financial crisis. Because all the big banks that we bailed out will fail again, except there's no bailout next time. And it's not just going to be the shareholders of the banks that lose money. And it won't just be the bondholders. But the depositors-- for the Fed to do the right thing, it has to let depositors of Bank of America, of Wells Fargo, lose their deposits. Because there is no money there. And the Fed cannot bail out the banks if it's also raising interest rates, and shrinking its own balance sheet.

09:28
So all the chickens have to come home to roost. The government has to fess up. We have to default on our bonds. We have to tell senior citizens, you're not getting Social Security. You're not getting Medicare. It's all over. You know these were promises we made to get your votes. We can never keep them. And you know, this is what you get for trusting us. Right. You know. John Belushi style. You know, you F'ed up. And just admit all that.

09:51
Or you know, they don't admit all that. And the dollar does become monopoly money. And then, now we're Zimbabwe. But you know, we're going to have to choose our poison. Right. I hope they make the right choice. But either way, the price of gold is going up. Just if they make the wrong choice, it's going to infinity. Right, because the dollar goes to zero.

10:12
PETER SCHIFF: But hopefully that doesn't happen. I mean, I want to make money, but I don't want to make it that bad. I don't want the country to suffer to that extent. You know, I know it's going to suffer. But I hope that we take the right medicine so that we ultimately can end the suffering, and have a real recovery.