Our Unfathomable US Debt Data Era Has Arrived

When our brains get confronted with gigantic numbers and overwhelming data, it tends to shut down and or fall woefully short comprehending what it's being confronted with.

Such is part of the argument against centrally controlled or top down led systems and or economies. But we'll get more into that complex and ballooning subject shortly as we review how legislatures, the US Treasury, and the private Federal Reserve, intend to supposedly rescue our collective financial futures. Or more cynically pick winners and almost fully ignore losers as they move debase unfunded promises we cannot keep in real value terms.

First let's have a look at some long term charts that essentially point out that fact that the US economy is never going to be as it once was only a few short months ago.

Now too that likely still, 2 of 5 US homes are still owned by aging Baby Boomers.

And given that the Baby Boomer demographic is retiring at a clip of about 10,000 per each and everyday this decade.

We now appear to be headed into an economy where less than 1/2 US citizens work for a living.

The labor force participation rate is now back at levels not seen since we temporarily moved the world onto a full fiat Federal Reserve note and currency out of thin air regime.

Our 'temporary' fiat $USD fraud is fading away. pic.twitter.com/0vlRoFhYMr

Judging by the collapsing employment chart above, we're probably headed back to levels not seen since WW2.

Bad news good news for you still solvent and employed gold bulls out there.

The last two eras when we had to shake off major economic downturns, the gold price went ballistic. This time will be different in terms of it will be larger than anyone alive watching this has ever seen before. 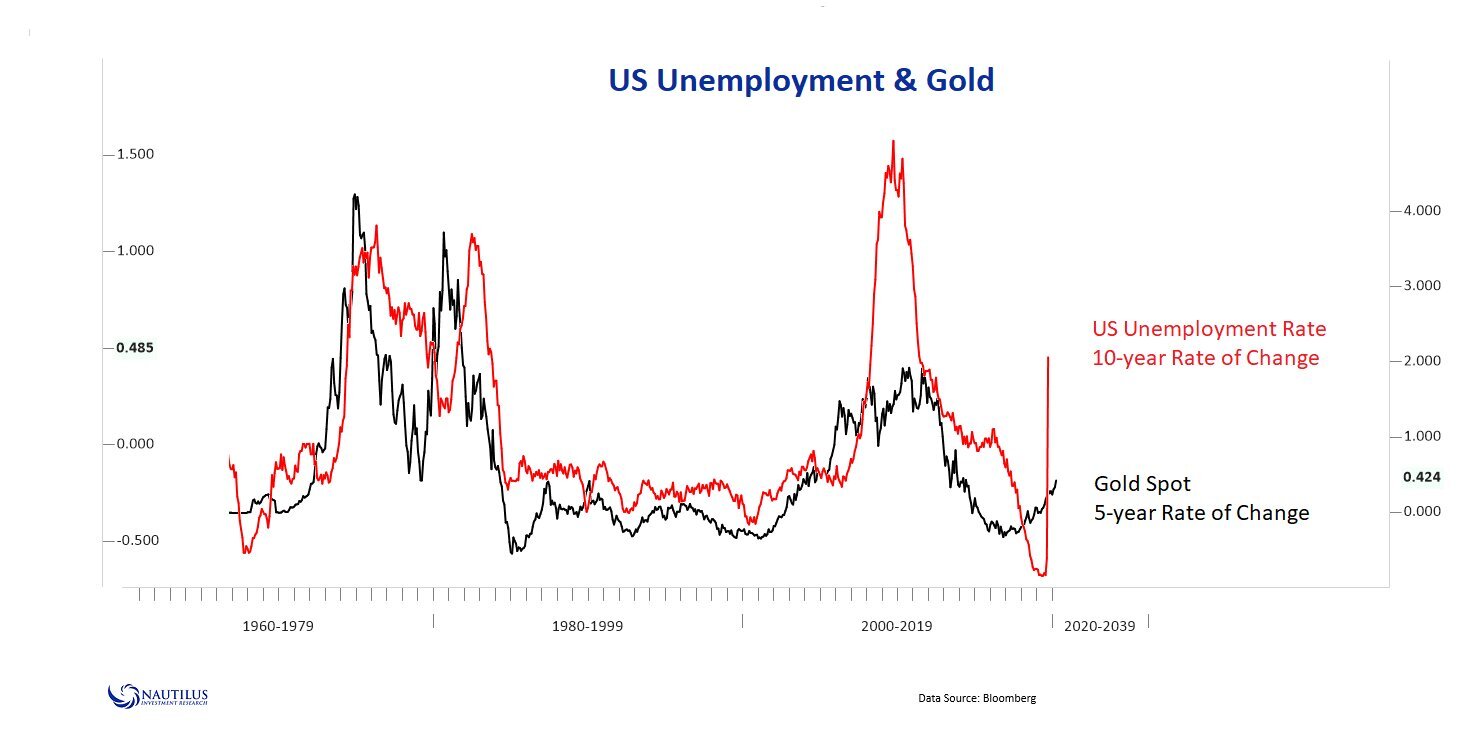 Silver billionaire bull Scott Minerd's Guggenheim partners recently published this shapeshifting real GDP forecast. It appears to carve about $3 trillion or some 15% off our 2020 gross domestic product. How are we gonna make up for that lost $3 trillion you might wonder?

The US Treasury is looking to borrow a sum of currency that no one would have believed only a few weeks ago. If the financial market won't give it to them, the private Federal Reserve will especially now that the two entities have effectively merged for this economic crisis.

All those unemployed people we covered just a minute ago, they and the working mass of the USA need bailouts too. How helpful and potentially inflationary will $2k a month cash injections in the Main Street economy be for perhaps the remainder of this year and possibly into the next?

Moving up another $3 trillion in just one year of time, our ballooning national debt now having officially passed $25 trillion this week.

And in case it hasn't dawned on us all yet. It doesn't matter who is in office, we're still on pace to clear $40 trillion Federal Government debt by the end of this decade.

US Treasury claims it will 'borrow'
10X the equivalent of our supposed
US Official Gold Reserves in
this year alone, 2020

OK now that we have covered many unfathomably large and growing numbers, let's examine but a few updated data points illustrating how global precious metal buyers and investors are reacting to all this fiat currency issuance and devaluations ongoing globally.

Industrial silver will have lessened demand thanks to the economic depression we are now entering, but it's the silver as a store of value, a monetary demand wildcard which from time to time makes the silver spot price go vertical.

This data point was published by the Silver Institutes' 2019 World Silver Survey and it's the most important point for silver bulls out there leading into this year, well before the crisis. This was mainly attributable back when a still anonymous silver whale took an over 100 million ounce bet on silver via ETFs late summer 2019.

How many more high net worth silver bullion bulls are going to be making such bets in the months and years coming?

What's the potential of our history rhyming louder upcoming?

Smaller but important point remains the dysfunctional of-lately US Mint is still selling the world’s most purchased gold bullion coins at a clip near the 2013 gold buy price dip threshold.

But our Australian gold coin buying friends to the west, their actions say buy gold now before your currency devalues, not after, if you can.

Final data point I wanted to communicate with you today, one I found intriguing this week deals with 100 years of time and data.

The Dow Gold and Dow Silver charts have some interesting and corresponding reflections with what we are seeing now.

The biggest precious metal investment capital flows go to gold first, and thus on these charts the mantra of gold leads, silver follows is confirmed by ever major bullish turn for these two well known monetary metals.

This is going to be crude, but for speed's sake if we simply overlap the two charts. The timelines are in exact lockstep. We can see gold like it is now leads, patient lagging silver, eventually follows and often outperforms.

That's it for this week.

All the very best to you and yours out there.