To nobody's surprise, varying degrees of bad economic data and reports continue to be released.

Interestingly, however, it seems market participants don't quite know what to do with the news.

Are the number of weekly unemployment claims falling, and Is that good news within the bad?

Or, take last week's GDP release for the first quarter of 2020.

According to the Bureau of Economic Analysis, the US economy shrunk by 4.8% in the first quarter, even though many analysts and experts were calling for a contraction of anywhere between 10% to 30%.

So, all things considered, was GDP really all that bad?

These are the types of questions traders and investors may be asking themselves as they decipher every bad, but not nearly as bad as many expected, data release.

In other words, there may be some indecision in the market as to what course of action to take.

For example, after such a historic rally, the Dow has more or less been banging around 23,000 and 24,000 for the last month: 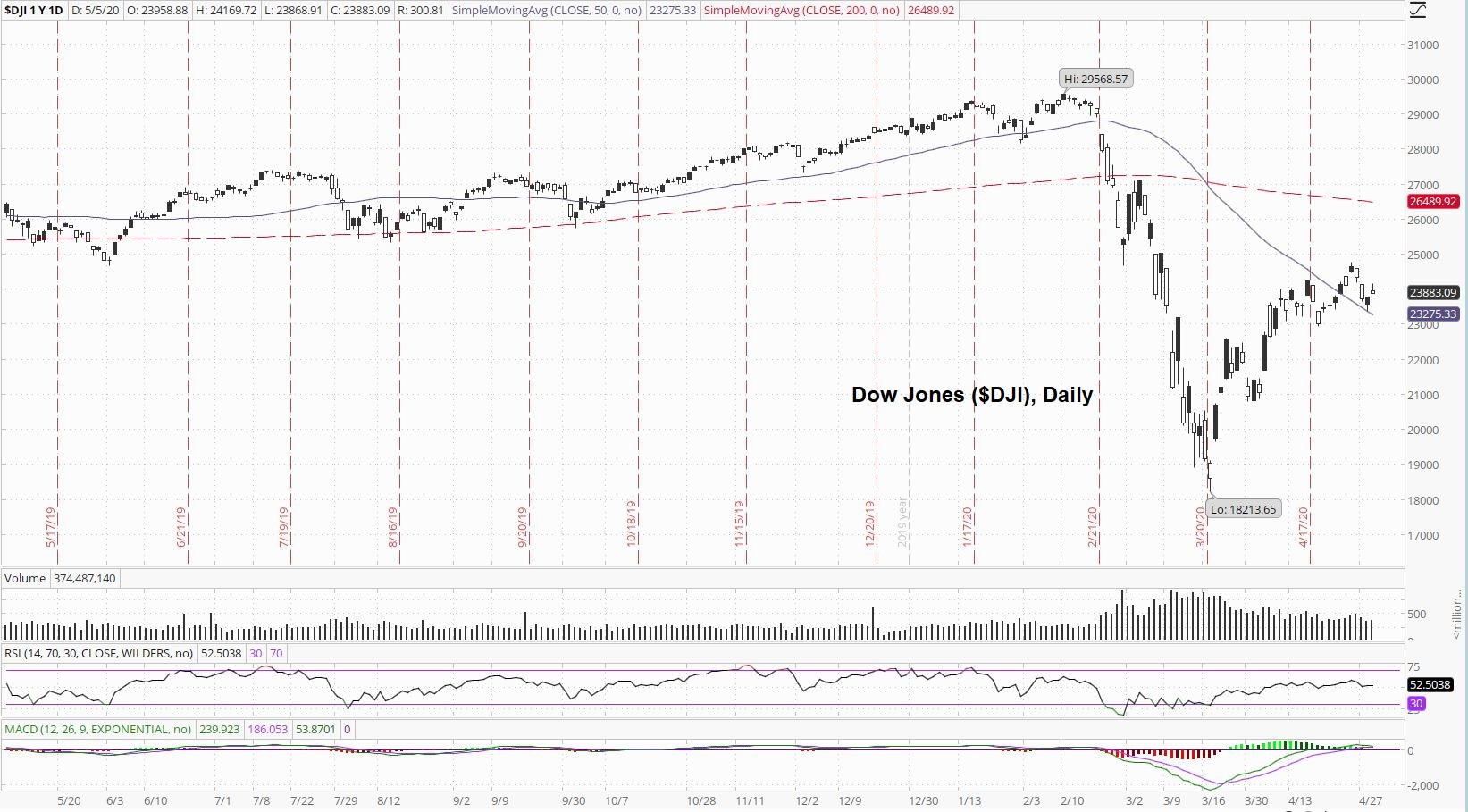 On the other hand, within the consolidation, we see a third potential higher-low to go along with two higher-highs, so it would be hard to argue against a short-term bull trend with a series of higher-lows and higher-highs.

The VIX is also banging around in a sideways choppy channel, call it between 30 and 40: 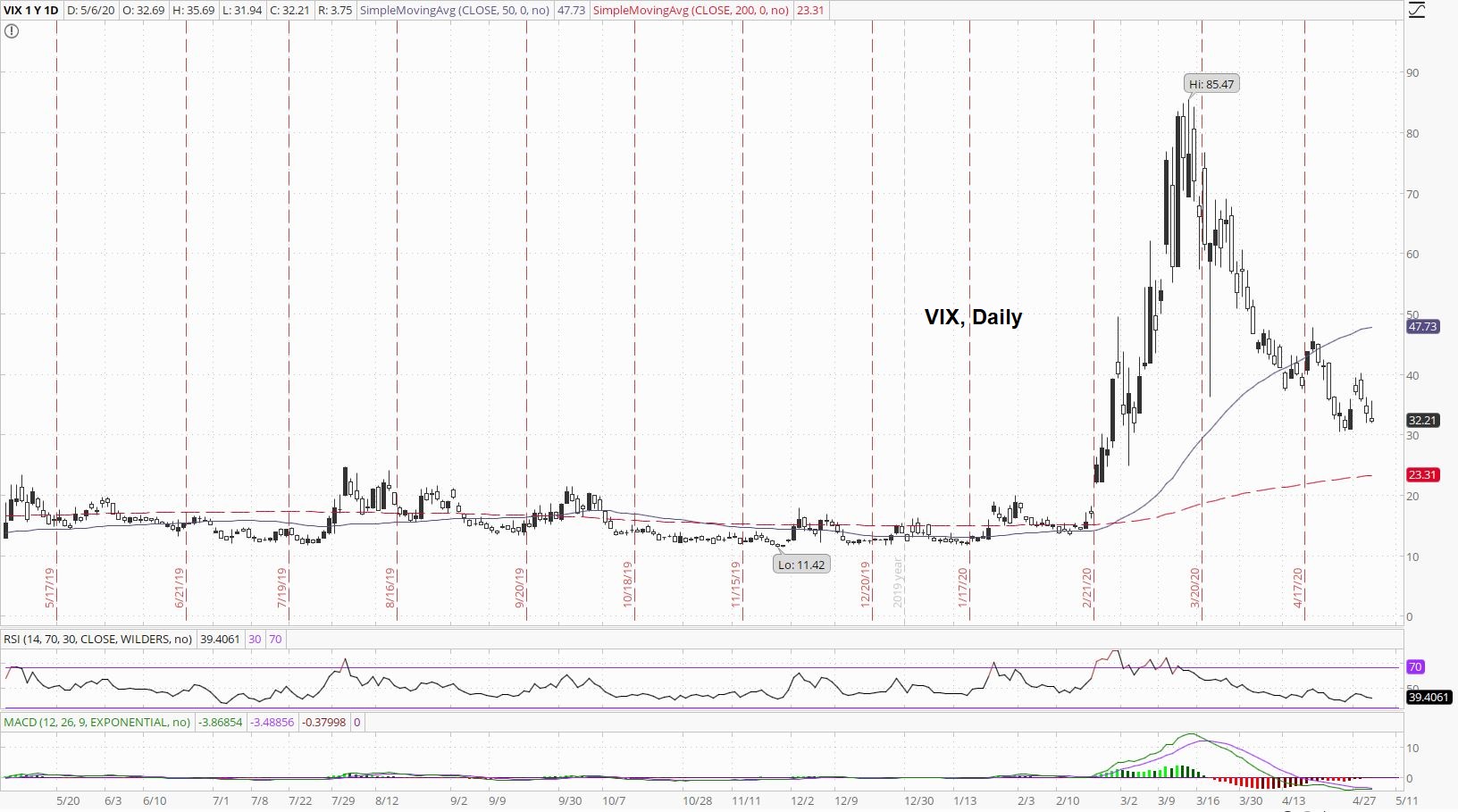 A falling VIX, however, can add to indecision by market participants as fear seems to be subsiding in the markets.

Looking at the yield on the 10-Year Note, we can clearly see this consolidation over time: 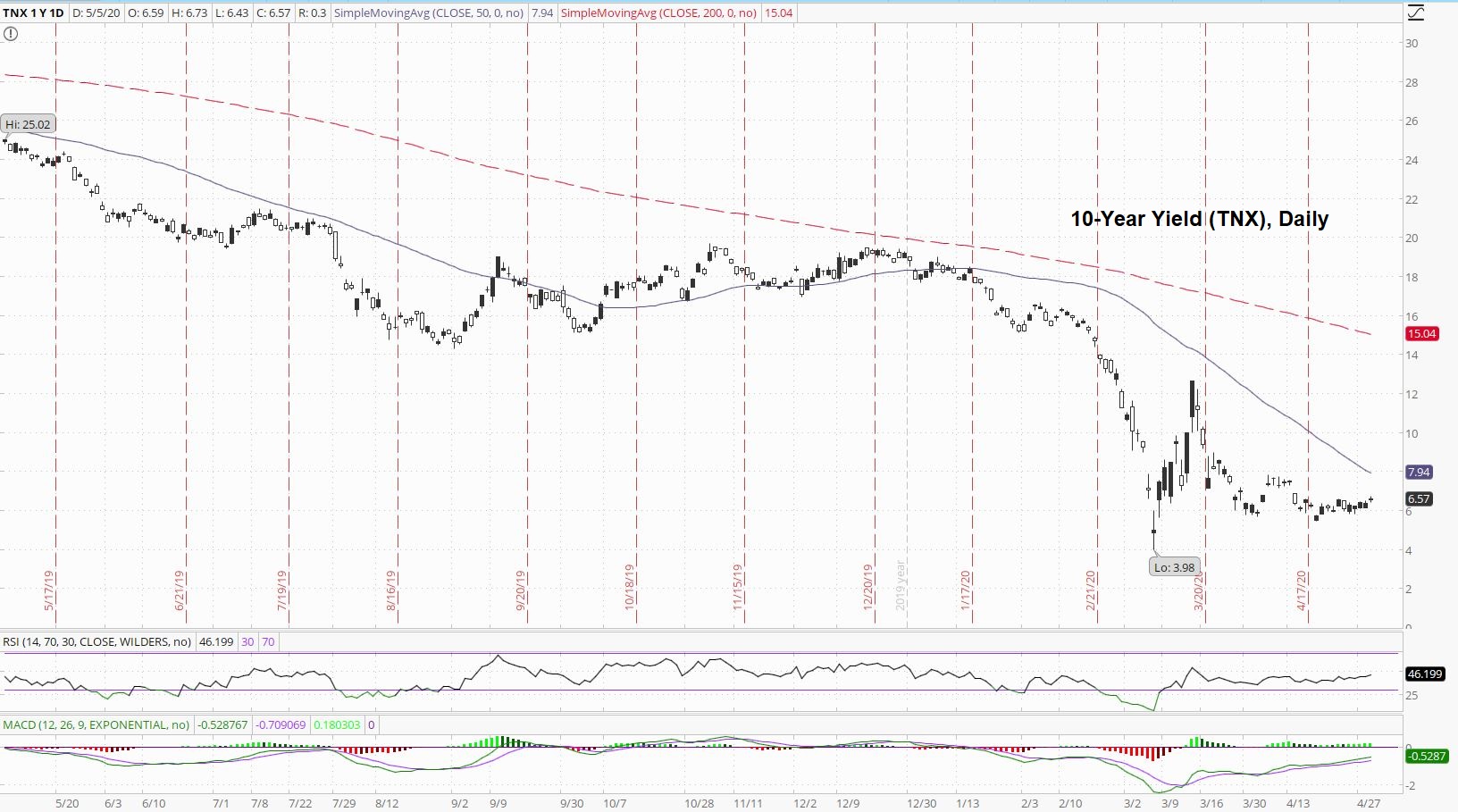 After talking about 0.6X% for some time now, we may be close to seeing the break-out (market risk on) or break-down (market risk-off) in yield.

Over the next few days, there will be a number of speeches given by Fed Governors, and when Fed Governors give speeches, their words can cause instant reactions in the markets, but, more importantly, we get the April BLS Employment Situation Report (jobs report) on Friday, May 8th.

The April jobs report is significant because many of the lockdowns, shutdowns, stay-at-home orders and other measures taken by the Federal Government and the various states did not begin in earnest until mid-March, so, for all intents and purposes, traders and investors will likely see an Employment Situation Report that is much worse than the one we got in March, which, according to the BLS,  resulted in a fall of 701,000 jobs.

Here's a grossly oversimplified example of why job losses can be much worse in April than they were in March: The restaurant industry.

Imagine a restaurant that, after being deemed "non-essential" by a governor, a mayor, or some other politician, was forced to close-down dine-in and offer take-out and/or deliver only.

The restaurant adapted, and decided to do only take-out.

The owner thought they would be busy enough to have three people working in the kitchen prepping, cooking, taking, and preparing orders.

But what happens if the customers didn't show up for take-out, or if the owner had a hard time ordering their main food products and was forced to be even more limited in scope of menu?

The restaurant owner, after initial optimism in those final couple of weeks in March, may have seen tanking sales. There may have been the need to cut staff down to one, plus the owner himself or herself, in this "new normal".

Said differently, there can be, and is, a lag from the time the shutdowns took place until the time the job losses really started mounting, and, in my opinion, that means we'll see a horrible jobs report on Friday, possibly to the tune of tens of millions of jobs lost.

The question then becomes: How will the markets take to the news?

The markets shrugged-off last week's first-quarter GDP print, but will the markets shrug-off this Friday's BLS report if the headline number is a decline in employment to the tune of 20,000,000 jobs?

Which puts the US dollar index in a very interesting spot right now: 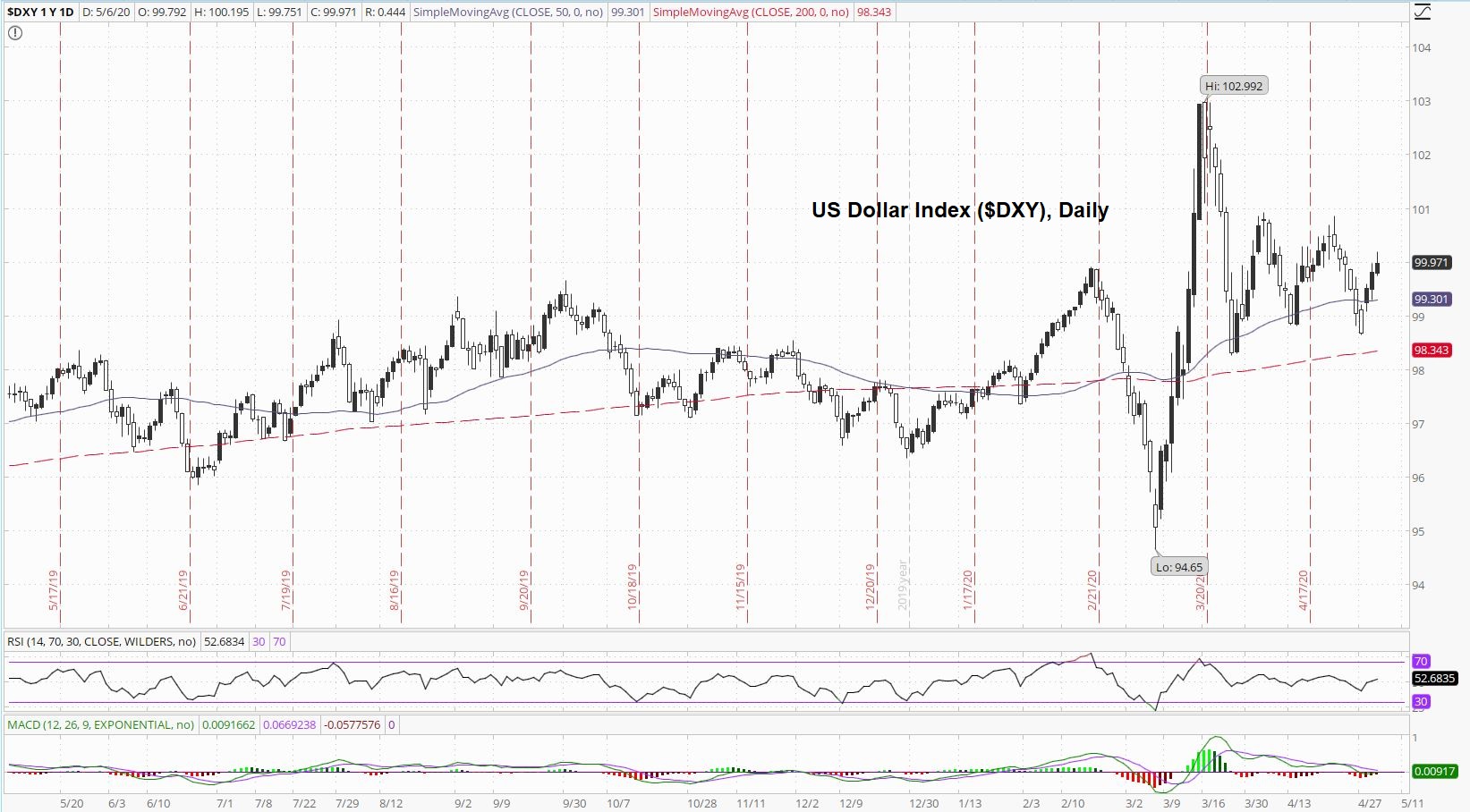 The US is clearly the hardest hit when it comes to the total number of coronavirus cases, deaths, and etc, and each one of those individual cases has human connections, whether it's family, friends, co-workers, parishioners, or whoever, so what does a devastating pandemic that hits the US the worst mean about the short, mid, and long-term prospects of the US dollar in general and for foreign investment in the United States specifically? 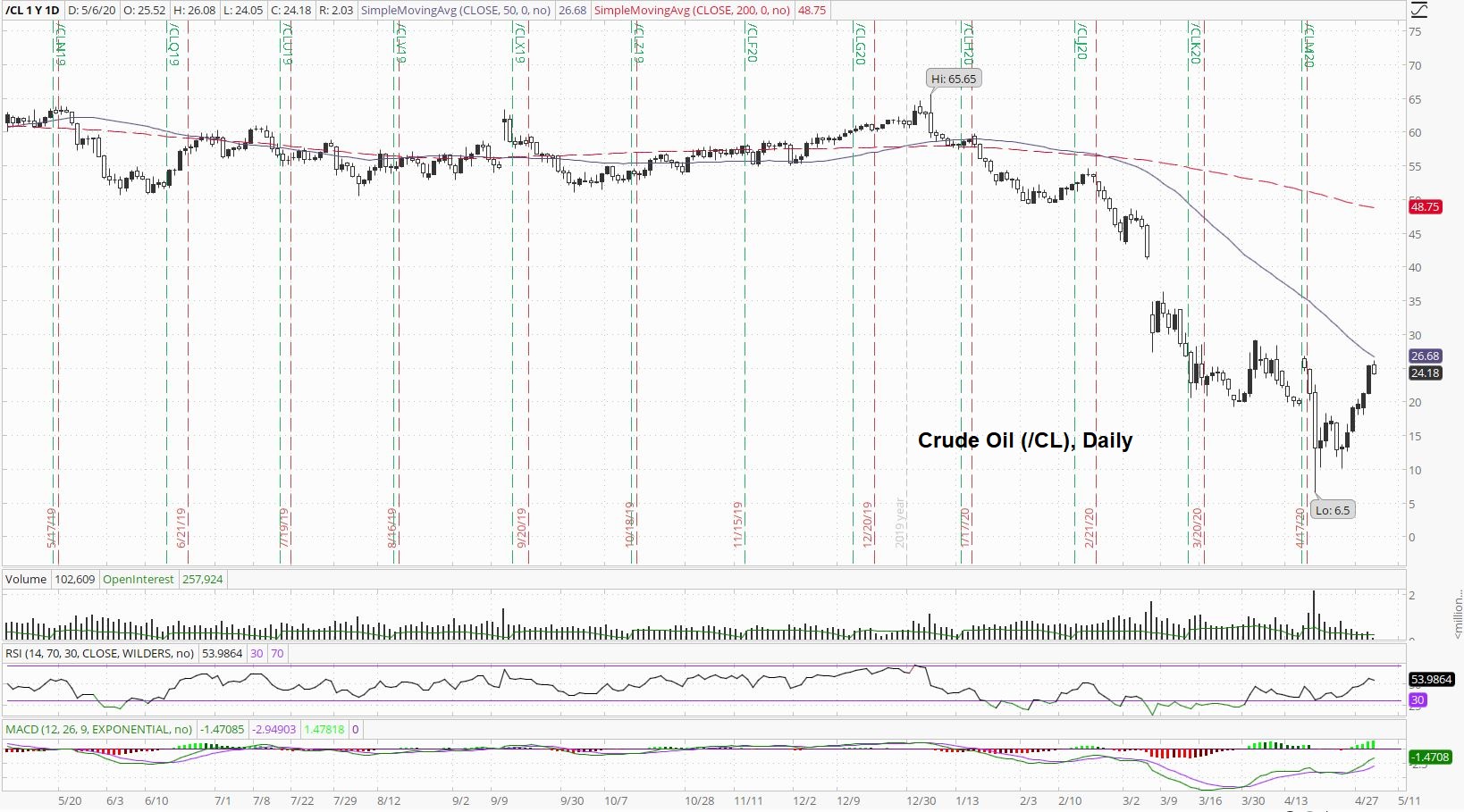 I feel for anybody who has a direct stake in crude oil one way or another as swings like this could only add a lot of stress on top of what are already very challenging times.

Copper, however,  has refused to break-down: 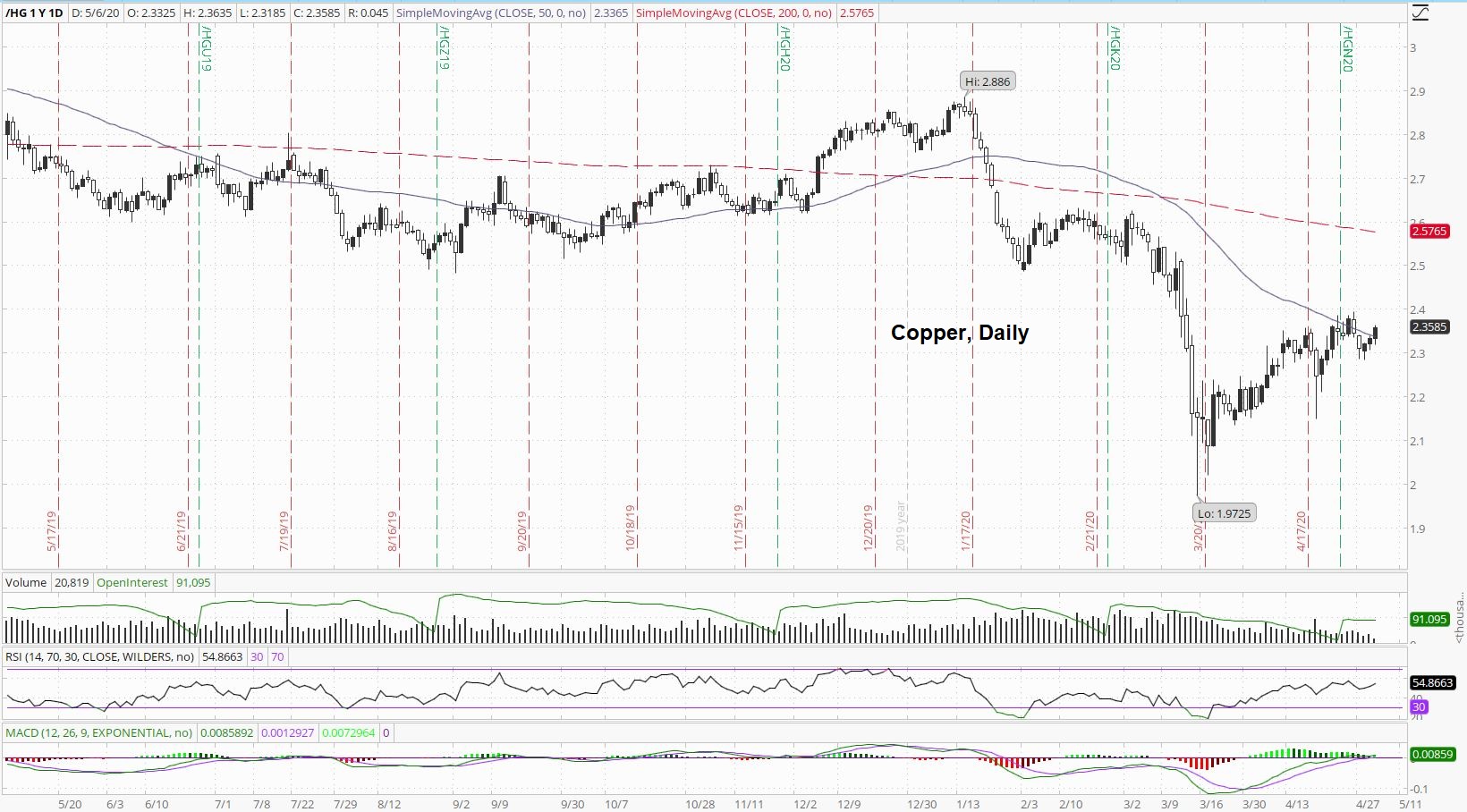 Copper could be telling us that fundamentally, several things are going on here, possibly including sovereign infrastructure construction and repair projects, mine disruptions, the importance of base metal mining as it relates to the global production of silver bullion or perhaps the fact that central banks around the world may have whipped up so much paper currency that there is a floor in the copper price?

Platinum is in a sideways choppy channel of its own: 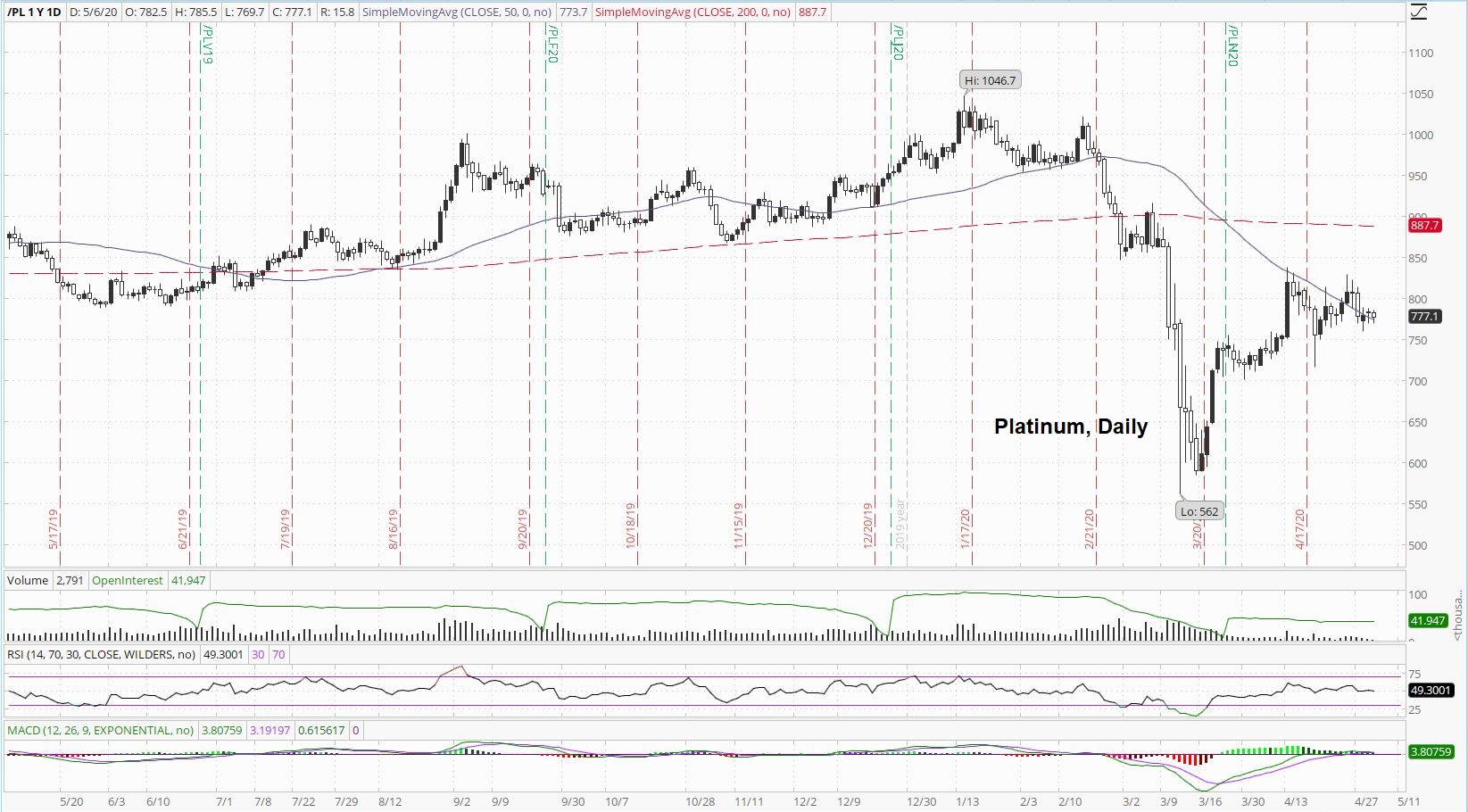 For a while, it looked as if platinum was going to pull off a "V"-shaped recovery, but as we see common in today's theme, a lot of markets out there are consolidating over time, only some are going at it more gracefully than others, platinum being one of the others.

Palladium, on the other hand, has fallen to near par with gold: 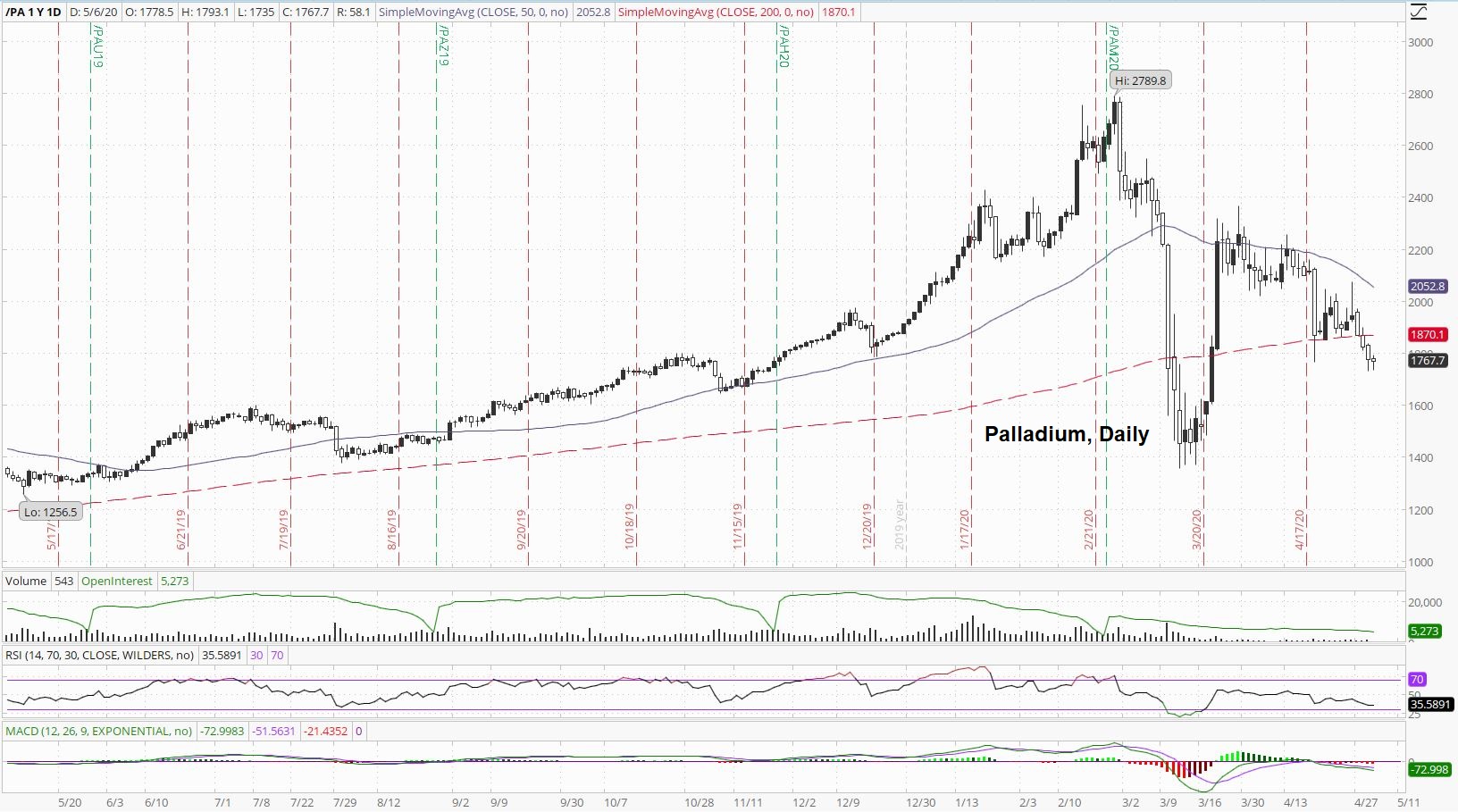 In fact, with so many internet sites with live price-feeds, it's possible palladium is already on par with gold or even lower, depending on where one looks.

The question is, will palladium be able to break that arguably bearish looking short-term trend?

Speaking of trends, we've been following 110 to 115 on the gold-to-silver ratio for many weeks: 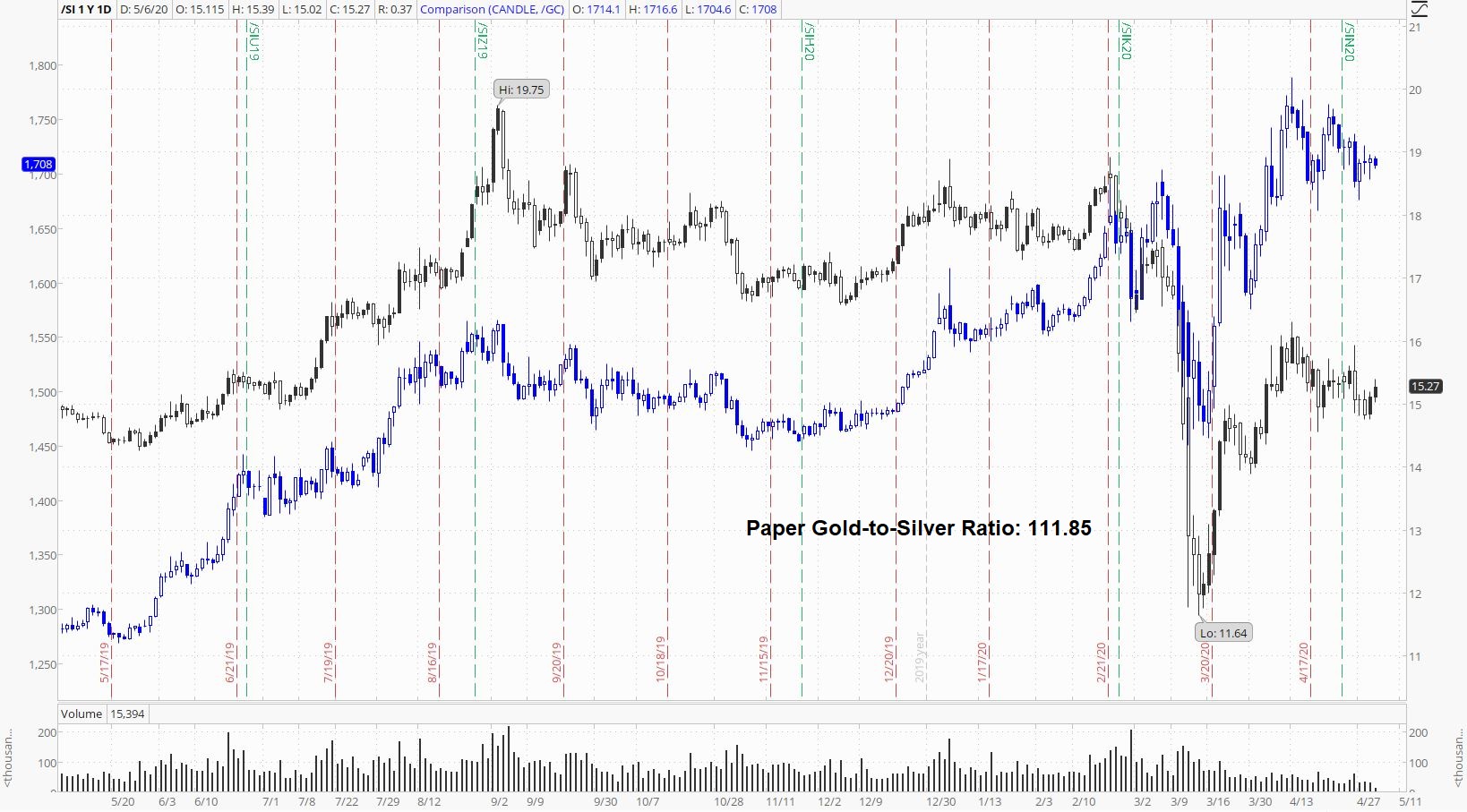 At the risk of sounding like a broken record, will this be the week silver starts to outperform gold as so many are expecting?

SIlver has, after all, found some nice short-term support at $15: 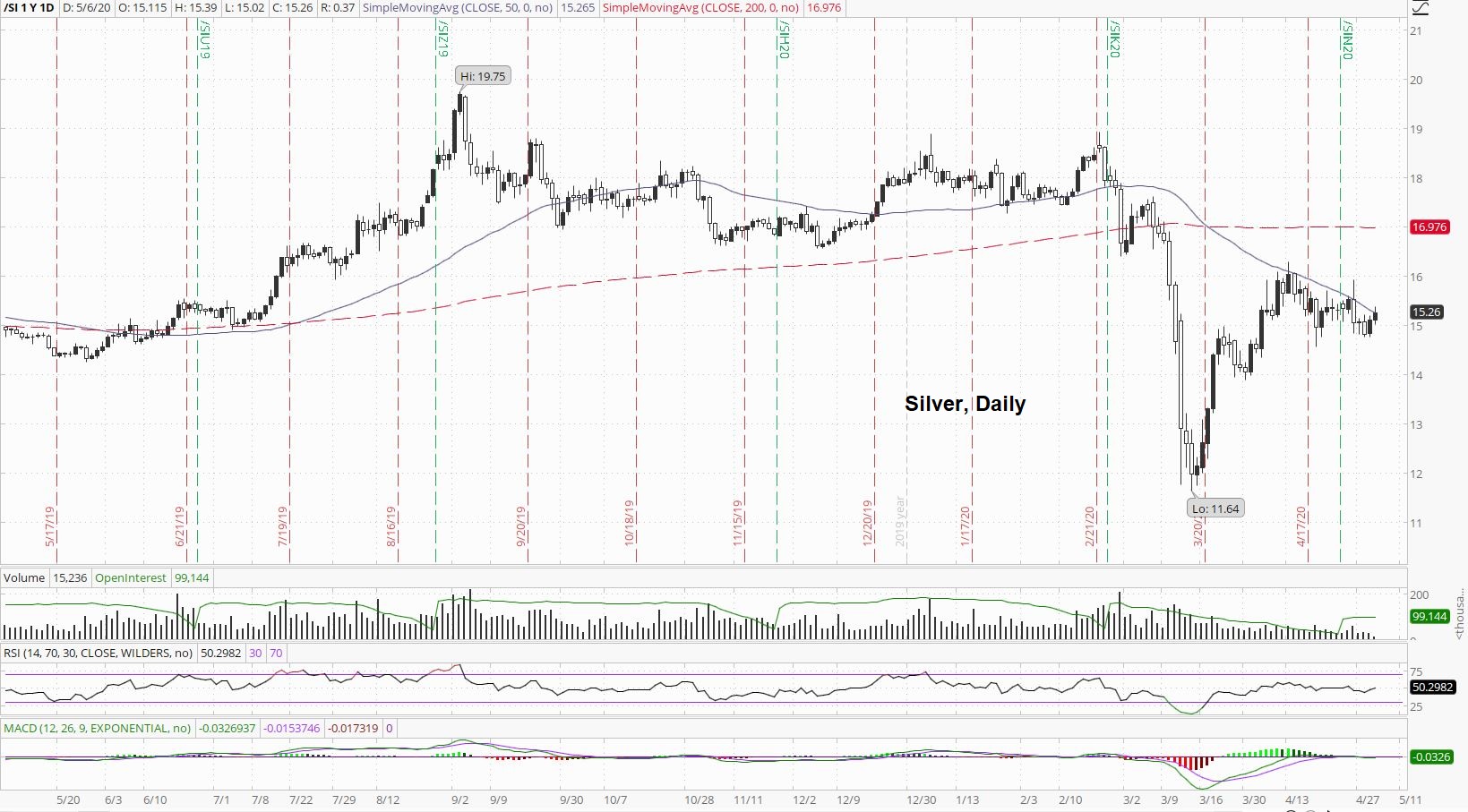 Although Monday and Tuesday, we saw 14-handles.

Finally, just a friendly reminder that nothing's changed with gold, regardless of its futures market price: 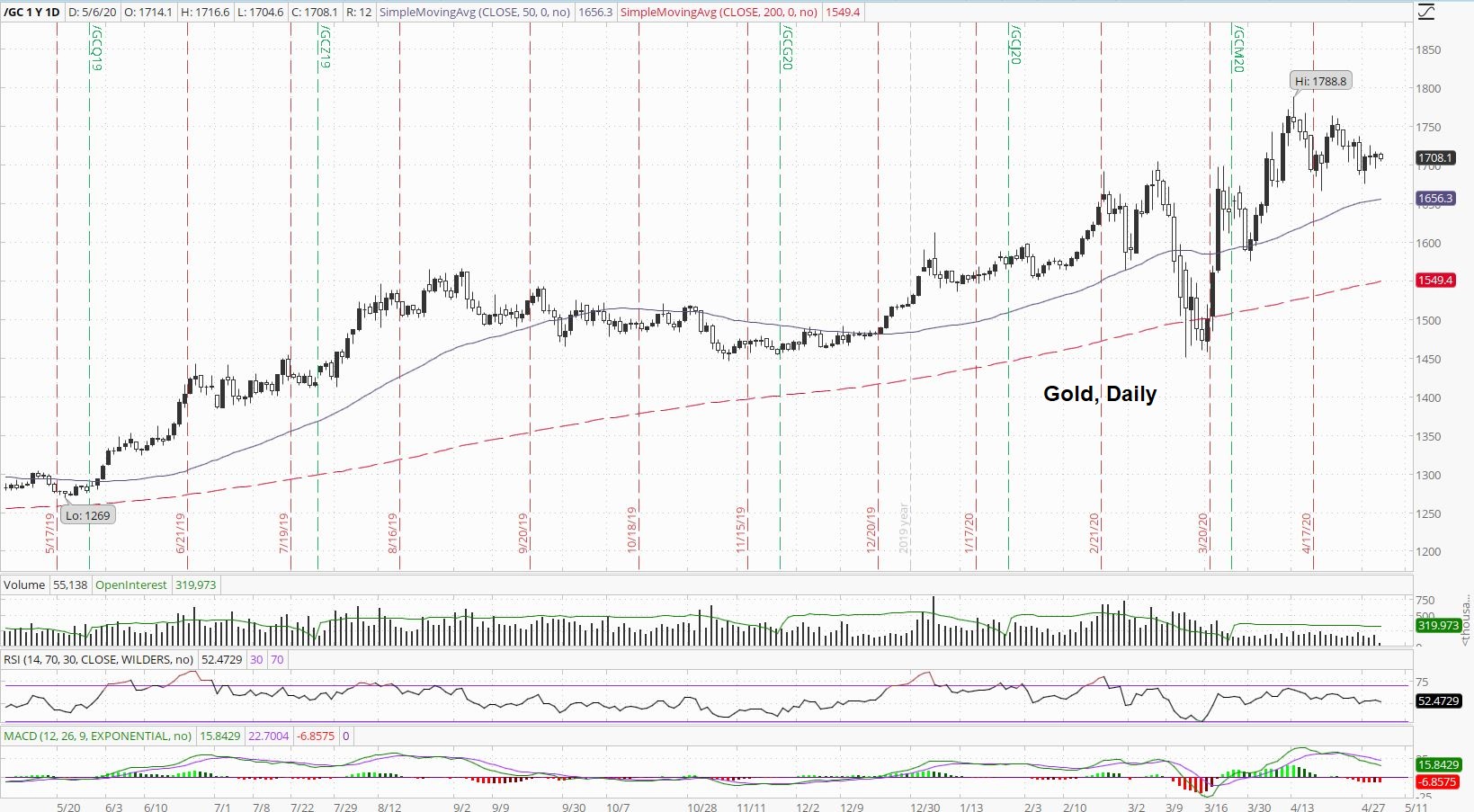 Physical gold bullion has been bid, is bid, and will remain bid for some time.