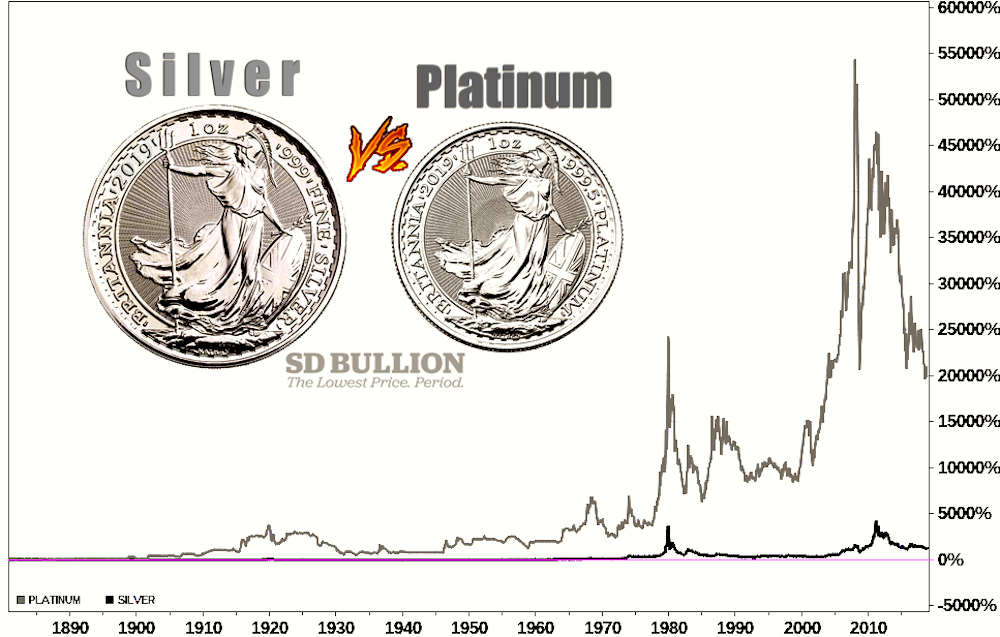 Here we will specifically dig into long term data comparing both current and historic Silver vs Platinum values.

In commodities, the cure to low prices or values if often just that. If a commodity becomes historically too cheap, suppliers of the commodity may move on to other ventures.

Precious commodities may not return to financial or commodity markets until a reasonable price is achieved. The laws of supply and demand eventually take hold, but there are often durations of time when things get whacky to the up and downside.

Currently between Silver vs Platinum right now, which might be the better long term play for bullion value buyers?

Platinum vs Silver: A Historic Primer

The last time we had a major fiat currency crisis in confidence was in 1980.

Within months of one another, all four major precious metals hit their then all-time record price highs in fiat US dollar terms (and no, it was not the Hunt Brothers who arranged this year's 1980 gold-platinum-palladium-silver price record phenomenon).

Some might argue we were close to another legit currency crisis in 2011, but ask old-time precious metal traders. Neither episode will likely compare to what we may experience to come.

As we look back at what major government central banks have been doing especially since the 2008 financial crisis, it’s not hard to fathom a similar but larger repeat episode coming.

One in which this time, seemingly the entire world’s falling confidence in fiat currency values drives all four precious metals to again new all-time record high prices respectively, and all within reasonable timeframes of one another.

We will begin with a large precious metal ratio chart that covers the full fiat currency era (ever since right before Nixon separated Gold Price 1971 to free-floating severing the final vestige of the Bretton Woods Agreement).

We will then drill into even longer term Silver vs Platinum charts, but this primer should be good to give us too some gold and palladium context. 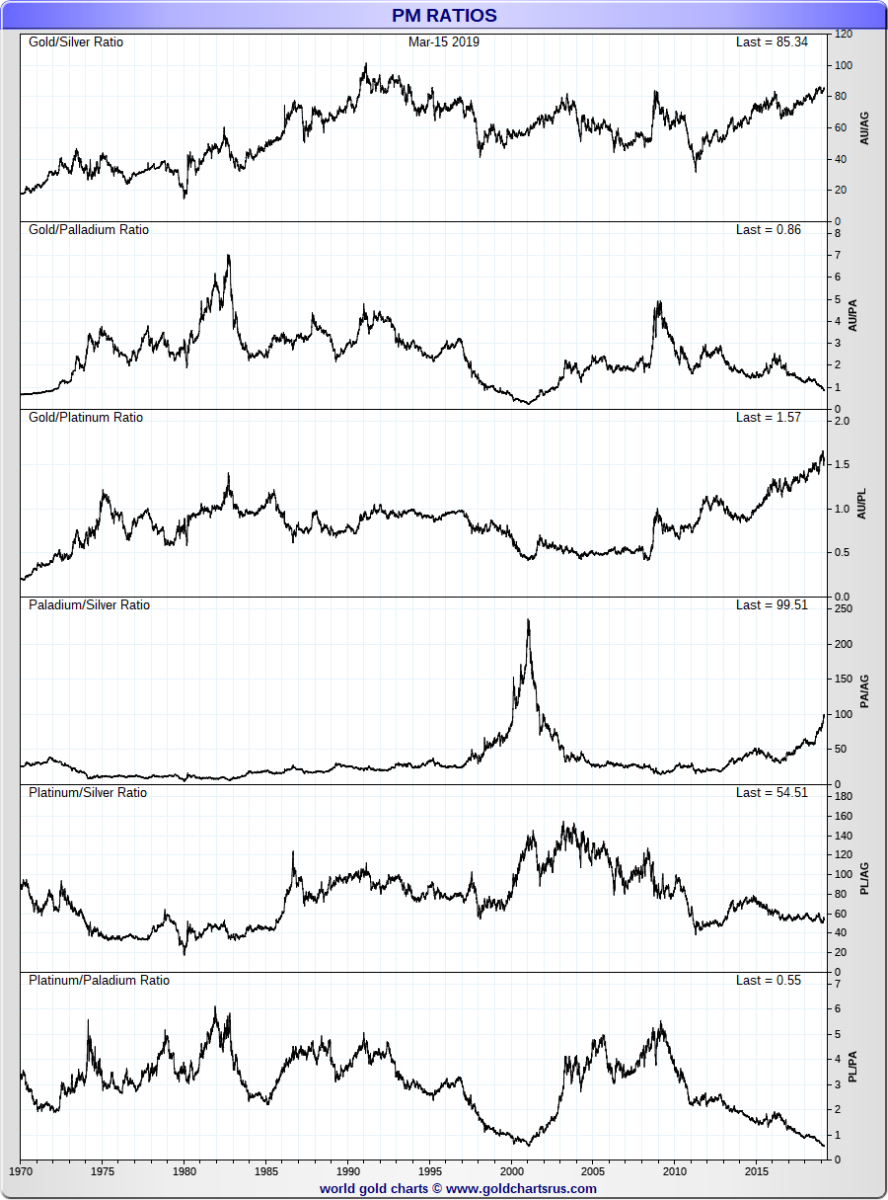 Conversely, the lower the black lines go the cheaper the first precious metal numerator is becoming versus the then more relatively expensive second precious metal denominator (again, and if you will).

By doing using this practice of studying precious metal ratios we can extract both confusing and compounding nominal price inflation data of any fiat currency often involved (this, of course, includes the fiat US dollar from 1971 to today).

This ratio measurement methodology can help us more easily understand which of the four precious metals may be under or overvalued at any given time.

In the following chart, we will now invoke the full fiat US dollar price performance of all four precious metals since 1970.

Refer back to the former full fiat currency era ratio chart to see how highly priced platinum was versus gold to start the year 1970.

This relatively high 1970 platinum price start may skew the near fifty years of price performance data. 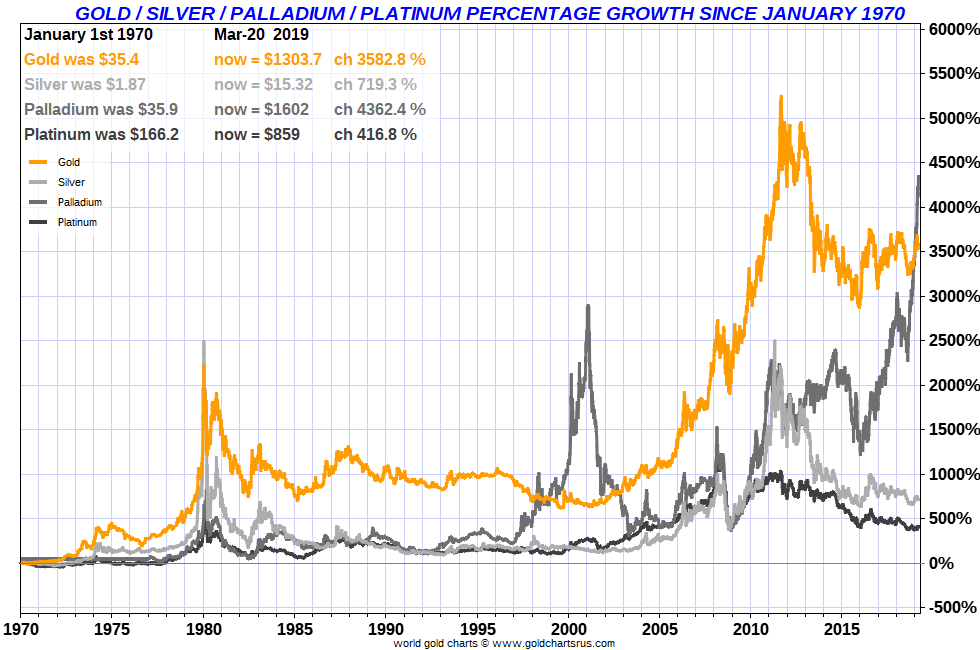 As is historically often the case, during the first innings of a building currency crisis, it appears gold often outperforms all other precious metals (e.g. 1974, 2011).

Yet given the historic spike dive nature of silver values, there have indeed been relatively short time frames in which the most reflective precious metal of all outperforms all others.

Let’s back out even further in time, shall we?

All the way back to when platinum was again this relatively cheap compared to gold. 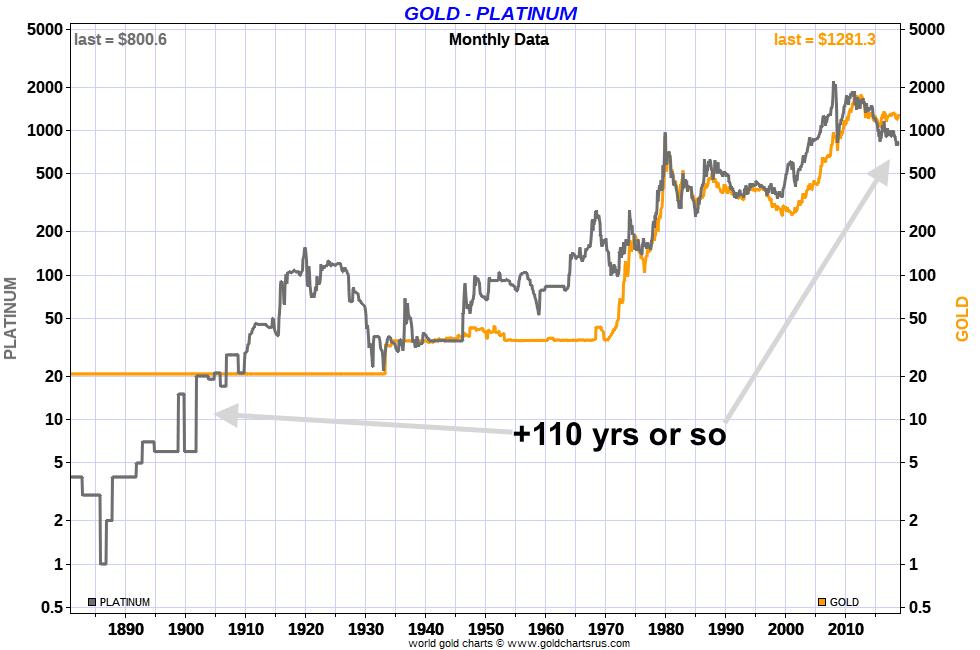 The following chart shows the once semi-sound then fully fiat US dollar price performance of silver vs platinum over at near 140-year timefrme. 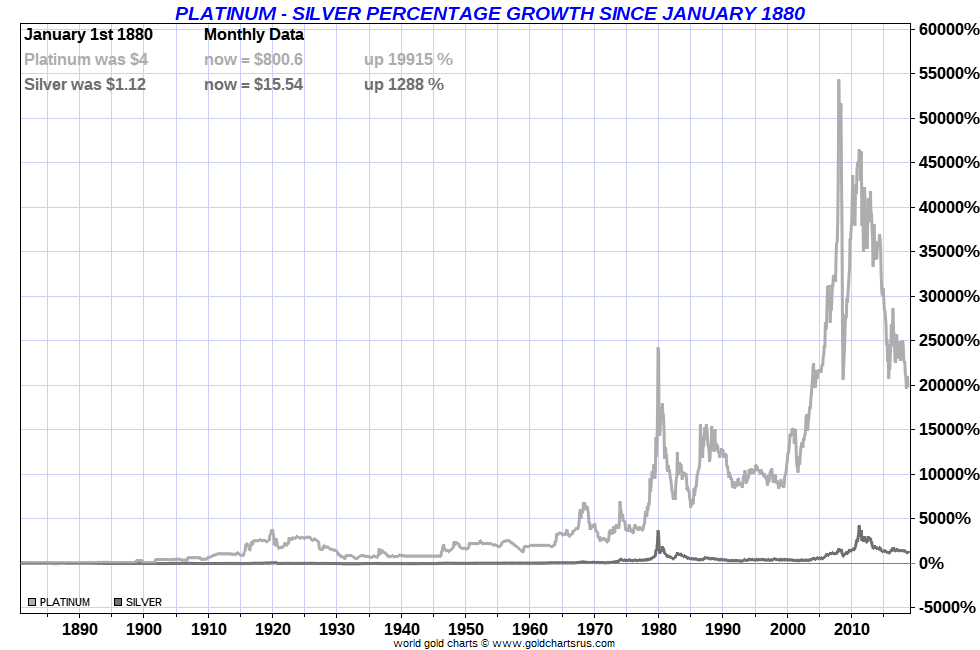 It is obvious there are relatively short timeframes in which silver outperforms platinum. 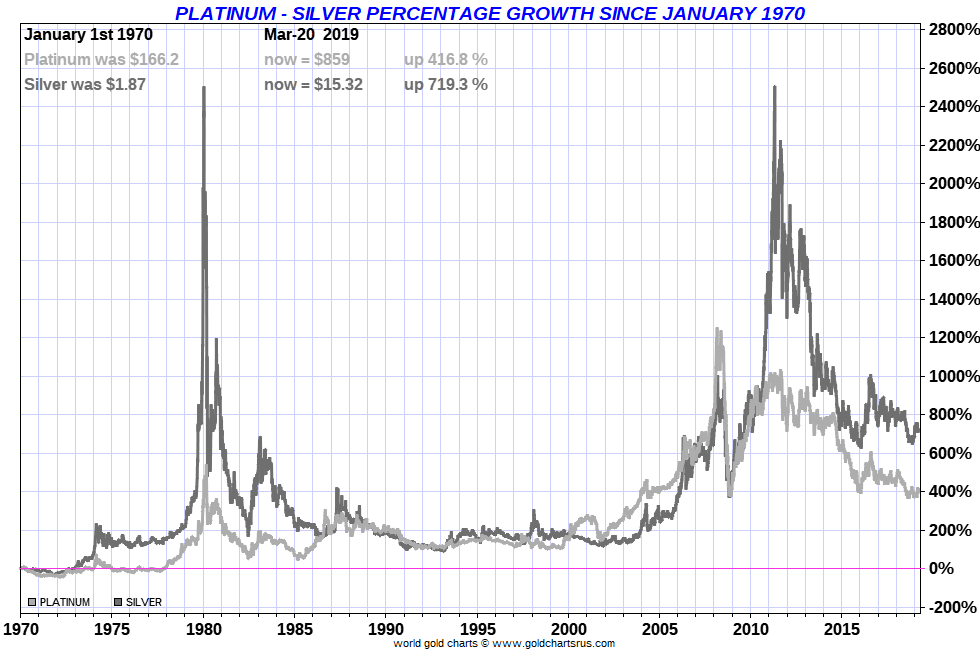 To finish this Silver vs Platinum value discussion let us think through a few of the two precious metals' fundamental pros and cons.

Both platinum and silver often adjusted lower in fiat currency prices when the world economy is facing deflationary forces which might hamper economic activity and manufacturing.

They both, after all, are precious manufacturing metals, while silver has the monetary metal aspect that from time to time can spur its superior outperformance versus all other common precious metal investment plays.

Platinum is extremely so rare and small in supply that its entire world physical supply could arguably fit in an average two-car garage. If having a high-value density at historically cheap valuations appeals, then owning some platinum bullion at these prices should be a good choice long term.

Yet if we are indeed facing a coming crisis in fiat monetary confidence crisis, perhaps silver is the cheaper of the two at the moment with the larger potential upside performance. Currently, the gold-silver ratio is in the mid-80s which is historically high. If safe storage space is not at a premium, then owning some silver bullion is a likely safe bet for long term purchasing power protection.

Compared to gold and palladium at the moment, best to sell or perhaps forego what is priced historically high, and instead buy that which is relatively cheaper.

Such is a long term strategy for building wealth via bullion allocations.

Check our blog post on Platinum vs Palladium Comparison. 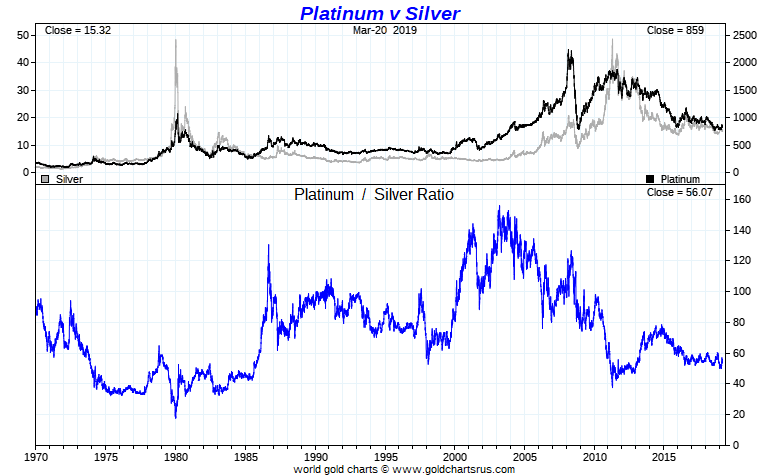 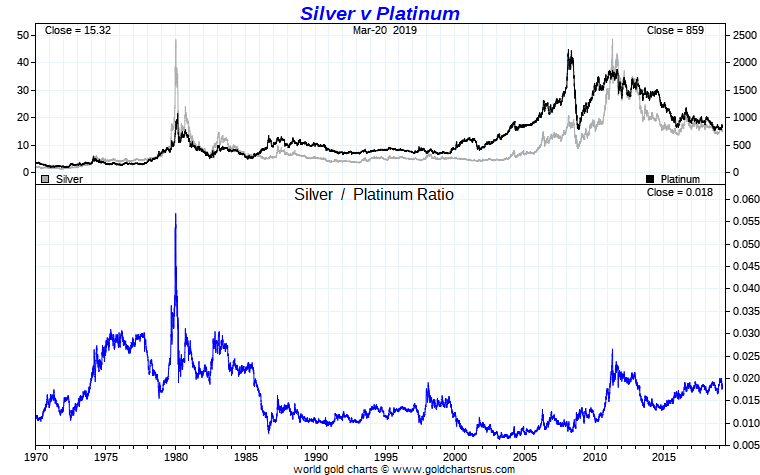 If indeed, another monetary crisis comes our way, silver will likely outperform for a short time frame, while platinum remains rarer both in its value versus gold right now and in real-world existence (hence it may outperform on a more sustained timeframe).

They both look attractively low-priced right now, we leave you to decide and allocate accordingly between the two.

Thanks for visiting us at SD Bullion.