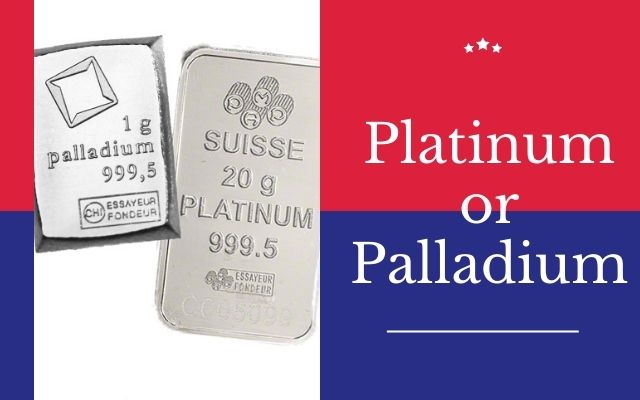 When it comes to bullion investment, gold and silver usually steal the spotlight. After all, they have been the base of currency for centuries and are often attributed to richness and wealth. However, they are not the only options in the market. Many bullion coin programs in the world already include annual issues of platinum coins as an investment opportunity, including the American Platinum Eagle by the US Mint. And more recently, palladium has been gaining popularity as an investment precious metal.

Because both metals are sheen-white faded, most people can’t really tell the difference between them. As a matter of fact, the only difference that might catch the untrained eye is the price.

Platinum is a precious metal that was first documented in the 16th century by Spanish miners in South and Central America. The earliest use of platinum by humans was from an ancient Egyptian casket from the 7th century B.C. However, Europe and Asia would only know of it around the 16th century, during the Age of Discovery, when Spanish explorers found the metal when searching for gold. In fact, platinum was first called “Platina” in Spanish, meaning “little silver”. Miners used to regard it as a nuisance in their quest for the more sought-after metal, gold.

As time went by, a ship returning from Spanish America was captured by the Royal Navy in the 18th century. In London, the Royal Society was curious and became interested in the new metal and soon platinum became popular across Europe.

Palladium got its name from the asteroid Pallas, which got its name from the Greek goddess of wisdom. One of the first accounts of palladium comes from miners in Brazil, in the early 1700s. While mining for gold, they came across this alloy of gold and palladium. They called it ouro podre or “rotten gold”. It also naturally occurs in alloys with platinum and that is from where it was first extracted.

The palladium spot price has recently seen a tremendous rise as demand for the precious metal increases while supply remains scarce on the crust of the Earth. The unbalance in supply and demand, especially during the pandemic, caused by mine operations being disrupted in Russia, has caused palladium prices to reach all-time records and it keeps soaring.

Differences between Platinum and Palladium

Visually, both metals look very similar. They are both appealing to the naked eye with sheen white shades, palladium being slightly darker than platinum. Both metals are resistant to rust and corrosion. They can maintain their brightness over a long period of time without tarnishing and, when scratched, they won’t lose metal.

The main difference right now, as mentioned above, is the price. A decade ago, palladium would be used as a cheaper replacement for platinum. However, ever since 2017, palladium prices have surpassed platinum. And, as of the time of writing of this article, Palladium is being priced at almost 2.5 fold the value of platinum.

The other difference is density. Platinum is much denser than palladium and, as such, it is considered a better metal to deal with, especially for the manufacturing of jewelry. Because it is a harder metal, palladium cannot withstand the same amount of bending as platinum without breaking. Platinum’s density is almost twice as high as that of palladium.

Uses for Platinum and Palladium

Platinum and Palladium are corrosion-resistant metals and great electrical conductors. As such, both have great industrial uses. The most common use is in the automotive industry in the making of catalytic converters for engines. These converters turn harmful gases into water vapor, substantially reducing the number of pollutants emitted into the air.

In dentistry, platinum’s high density fits perfectly to the manufacturing of crowns, bridges, pins, and fillings, as well as dental equipment.

Platinum’s high density is also another reason why it’s popularly used in jewelry (in addition to its shiny aesthetic appeal). Palladium is also used by jewelers, but with restrictions as it is more difficult to deal with, its low density. For instance, it is harder to resize a palladium ring than a platinum one. However, both metals are corrosion resistant and hypoallergenic and, therefore, are not likely to trigger allergies.

Palladium has also been mixed with gold to create a white gold alloy. Traditionally, white gold was used with nickel, but palladium became popular as well to avoid corrosion and allergic skin reactions. Palladium white gold is very popular in the making of an engagement ring and wedding band.

At this point, you could be wondering if you should start investing in platinum or palladium. Or even both, for that matter. Prices for platinum and palladium are usually more volatile than gold and tend to perform well in the long run. Therefore, most experts suggest that these precious metals could be a good long-term investment. Especially for those who are looking to diversify their portfolios even further from fiat currency devaluation and inflation.

The fact is that most platinum and palladium mining comes from three specific countries: South Africa, Russia, and Zimbabwe. In other words, any political instability in any of these three countries can cause a shortage in supplies and an increase in prices.

In addition, increased regulations for catalytic converters on automobiles run by fossil fuels have pushed demand for both these metals as they are essential to reduce the emission of harmful pollutants into the environment.

Platinum was popularized in the bullion market earlier than palladium. Canada, Australia, China, and the Isle of Man were already issuing platinum bullion coins in the 80s. The United States Mint started striking the American Platinum Eagle in 1997 and the program has been running ever since. In 2009, production of the Platinum Eagle was uncertain due to the rise in prices of this precious metal, but a limited mintage of 8,000 was announced by the US Mint and when sales started, all units were sold out within a week.

Many private mints refine platinum into platinum bars, including the world-renowned PAMP Suisse and Valcambi.

The first palladium coins were produced back in 1966 by Sierra Leone. Other countries joined in, such as the Soviet Union, Canada, Australia, and China. Russia is still the country that has issued the most amount of palladium coins, as the country is one of the most abundant in palladium mines.

In December of 2010, the US Congress passed a law authorizing the United States Mint to produce a one-troy-ounce palladium coin. It would be 7 years before the first strike in 2017. Ever since palladium prices have been soaring.

Palladium bars are still less common in the market, but the old reliables PAMP Suisse and Valcambi do produce them as well.

Platinum and palladium rounds are also an option for investors looking for smaller premiums over spot, but they are less common in the markets.

SD Bullion offers a variety of platinum and palladium bullion products, including coins and bars. Contact our support in case you have any questions. We are always happy to assist and hear from our customers.