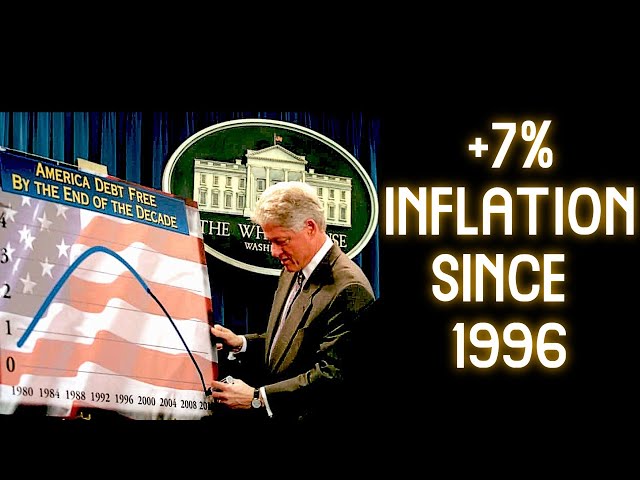 Last week US financial authorities claimed that the fiat US dollar lost just over -7% in real value purchasing power for 2021.

While that accusation is brutal enough, the ugly truth is near twice that amount.

You see, the government has been increasingly lying about yearly price inflation data since the last time the fiat US dollar got taken to the cleaners by silver and gold. Since 1980, and increasingly so in the 1990s and to follow, the Bureau of Labor and Statistics has been rigging price inflation data to help its boss, the world's biggest debtor of all time, the US government, underpay promises it has increasing never saved for ahead of time.

Even mainstream financial media have to report how silly some of the price inflation lyings have become. Barrons reporter Randall Forsyth pointed out the following this week.

Us boiled frogs are finally now told inflation is bad
'Why' this timing & major change in narrative?

Did you catch that?

The Government's Bureau of Labor & Statistics uses a ridiculous 'Imputed Rent' metric to help understate the fiat Federal Reserve note or fiat US dollar's loss of purchasing power this past year. He states that the 2021 loss in fiat $USD buying power would be over 10% if we accurately measured the data.

If we use the old 1980 methodology for measuring price inflation, the situation of 7% inflation has been the norm for compounding decades running, something we've become numb to covering the majority of many of our entire lives. For the last 25 years running, the norm has been over 7% actual price inflation year after year according to Shadow Government Statistics 1980-based data.

And the massive price inflation we are witnessing now makes sense, as we have blown our fiat US dollar M2 supply out on a percentage basis recently high than ever before on a historical record. All while the goods and services we need and require have stayed the same or perhaps even shrunk through these last few years of pandemic shutdowns.

It makes common sense that until the next major financial crisis and deflationary event arrive, you can expect price inflation to go higher yet still. And as per usual, the US government's BLS to underreport it by around half or perhaps even more ongoing.

The gold-silver ratio fell lower to close at 79.

If you have been following our SD Bullion Market Update videos since late 2019, you probably recall this major news story. In September 2019, the US interbank overnight REPO lending rate exploded to record high levels in the middle of that month. Official excuses given at the time as to why that occurred were complete nonsense.

In late 2019 we speculated that the REPO loan spike and increase in the fiat Federal Reserve's balance had something to do with failing derivatives, illustrating back then, we were then on the Fed would double its then balance sheet by the end of 2022.

Hard to believe looking backward, but the fiat Federal Reserve actually doubled its balance sheet to over $8 trillion by the middle of 2021. It's now closer to a reported $9 trillion to start 2022.

But who knows with potential Special Purpose Vehicles hiding bailouts offshore what the actual truth might be. If the fiat financial powers transparently lie about inflation date year after year to our collective faces, well you might wonder aloud what's truly happening behind the scenes.

This week Wall Street on Parade reported the $2.7 billion in credit default swap failure essentially set off another 2008 like scenario. A situation where again banks did not know who the losers of derivative bets were and therefore were not willing to lend with counterparties not knowing at the time where potential bankruptcy fallouts might appear.

Moving on to the bullion markets this week.

And this level of increasing silver store of value demand will likely only put further silver squeeze pressures on spot prices ahead.

Speaking of the Reddit Silver Squeeze phenomenon beginning in Q1 2021, we are about to celebrate the first anniversary of that viral internet movement.

That’s all for this week.

As always to you out there. Take great care of yourselves and those you love.