On the Building Silver Boom | A Response to John Dizard

Gold and the precious metals complex is increasingly showing signs of strength.

In this week's update, we are going to look at more bullish signs the largest bull run for bullion may be nearing the starting gate.

Look at this monthly fiat Fed note chart vs gold 21st Century. It’s been a while since we been in this $1800. What's next?

The 2011 nominal high? The $2,000 psychological round number? Well, my contention is following that round number, the mania phase will soon follow. But hey we're not gonna talk about that today.

Instead, we're gonna look at a few more data points regarding silver, especially the recent unprecedented silver store of value demand we have been seeing of late.

And we're going to have some fun shooting figurative silver bullets through his July 2, 2020 opinion piece entitled "Don't Bet on the Silver Boom."

As mentioned last week, we have a super high stopped contract delivery number for this month's COMEX July silver futures contracts. This current amount theoretically represents over +68 million ounces of potential deliverable silver in just this month to date. 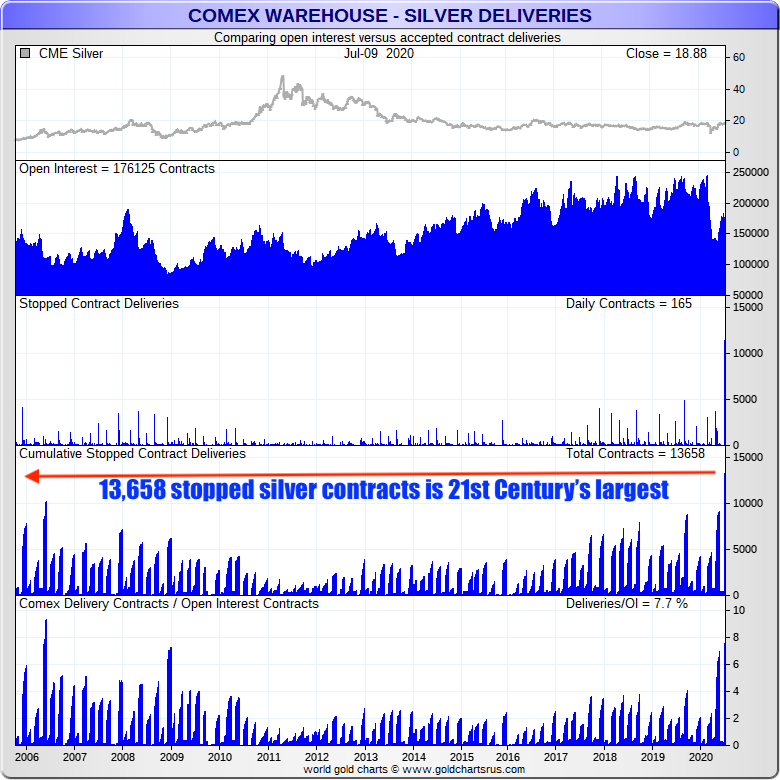 So early this week I stumbled upon an even longer-term Bloomberg Comex silver stopped contract chart, that had even longer range data than what we showed last week.

So even if we go back the mid-late 1990s, back when hard asset Warren Buffett's Berkshire Hathaway went longer than the Hunt Brothers bullion pile sucking around 129.7 million ounces out of the then Comex silver warehouse complex.

As for current silver COMEX warehouses like Brink's NYC, we can literally see the silver sucking sound in action the last two years.

Turning to the gorilla of the silver Comex warehouse reserves. The alleged Racketeer Influenced and Corrupt Organization precious metals trading desk for a near-decade of time still has a massive sway over silver price discovery has recently had to change about 30 million ounces from eligible to register as many of those ounces may be leaving in the weeks and months upcoming.

You may have to squint to see the top right of the chart as the color goes from light to dark green signaling this large recent change.

This is the largest change we have seen since the Crash JP Morgan Buy Silver Campaign experience which certainly spurred JP Morgan to get rush approved for a COMEX silver warehouse and then proceed to become the silver gorilla in this market. All after nearly losing their alleged spoofing and naked short silver betting desk billions in potential losses by early spring 2011.

Moving on to the unprecedented silver bullion inflows into Silver ETFs in the last 4 months of time.

About 1/5th of world annual recycled and newly mined silver has funneled into them in the last 120 days. Of course, this does not take into account all the newly minted silver bullion coins bars and rounds that were snapped up from private and government bullion mintage during the viral silver bullion supply crunch.

Remember this image from last week, that's 40 of these lots in 120 days of time.

Now turning to the silver piece published July 2nd in the Financial Times out of London. A location where they must be feeling a lot of silver demand pressure, perhaps the timing of this hit piece not so coincidental.

I was going to read this article in a British accent and retort it with my gruff American accent. But it turns out John Dizard is a turncoat of sorts, as you will hear he has no problems denigrating many of his fellow US citizens and according to the internet, guy shills out of New York City.

So let's get into this drivel.

John, John, you failed to mention that Jeffrey Christian of the CPM Group is on record stating that the supposed silver cornering Hunt Brothers had little if any direct effect on the melt-up in silver prices in the late 1970s and early 1980.

More so all commodities were melting up in value as the then fiat financial system was being called to account for its disconnect from real assets at the time.

We think another one of those eras is coming later this decade.

Problem with the Hunt Brothers 1980 fiasco, is that they were greedy and stupid to think the then COMEX would not suddenly change its rules to whatever the financial powers that were at the time, so dictated. Tell me John, how is silver supposed to go further up in price on the COMEX in late January 1980, when they suddenly change the rules to mandated liquidation order only to break the exponential price action and probably scare the hell out of the gold pit trading longs next door?

The Hunt Brother Scapegoat canard that you and other hit piece artists break out from time to time, it's a half truth silver-lined tale. Silver stackers now know the other half of the historic coin so to speak. And your industry expert, Jeff Christian does too.

Afraid to break to you John, but the high percentile of Hedge Funds know little to nothing about the physical gold and silver bullion markets. Most will get to enjoy being stuck in an underperforming derivative matrix (i.e. silver bullion vs ETFs) in the years upcoming as bullion premiums outperform inferior synthetic price trackers.

You state that the physical trade in precious metals has attracted too many compliance costs and scandals to be interesting to most banks. Is that what you call being caught (e.g. Scotiabank) on the incorrect side, leveraged wrong, in a two price gold and silver market diverging between London and the COMEX (e.g. HSBC)?

And what about all those unprosecuted white-collar financial crimes that got let off and or wrist slap fined over the last 10 years, are those compliance costs or they just “scandals”? Or is that price-rigging white-collar criminal conspiracy and organized racketeering are just how things are? We're gonna find that I am sure soon enough.

Yes, there are easily about 4 billion ounces of silver bullion spread around the world in silver bars, rounds, and coins. So that is about $80 to 100 billion in silver bullion vs a world awash with like 1000 times that in other inferior leaky less hard store of values (see the 1:44 minute mark in the following video for silver bullion vs other financial assets context).

Silver stackers are not going away John, bad news.

Expect that infinite QE ongoing is gonna replicate us silver bullion stackers in the coming year’s.