It has been very exciting to watch the price action in silver over the last week!

Recall that just weeks ago, the technical set-up for silver was looking like a classic head-n-shoulders chart pattern, and silver had just completed the right shoulder. Needless to say, the outlook was rather bearish in the short-term. The set-up to the head-n-shoulders happened very quick, in fact, in less than 20 trading days, which is about as fast as a chart pattern such as this one can develop, but something interesting happened once the right shoulder was completed: Silver paused, and then began to rally and rally hard.

Indeed, depending on where you look, and according to the charts that I use (many websites show different prices, depending on the charts that are used, for various valid reasons, which is the topic of an article for another day), silver has since rallied from the spike low of $17.01 on June 15th to a spike high of $19.81 in the early morning hours just this morning: 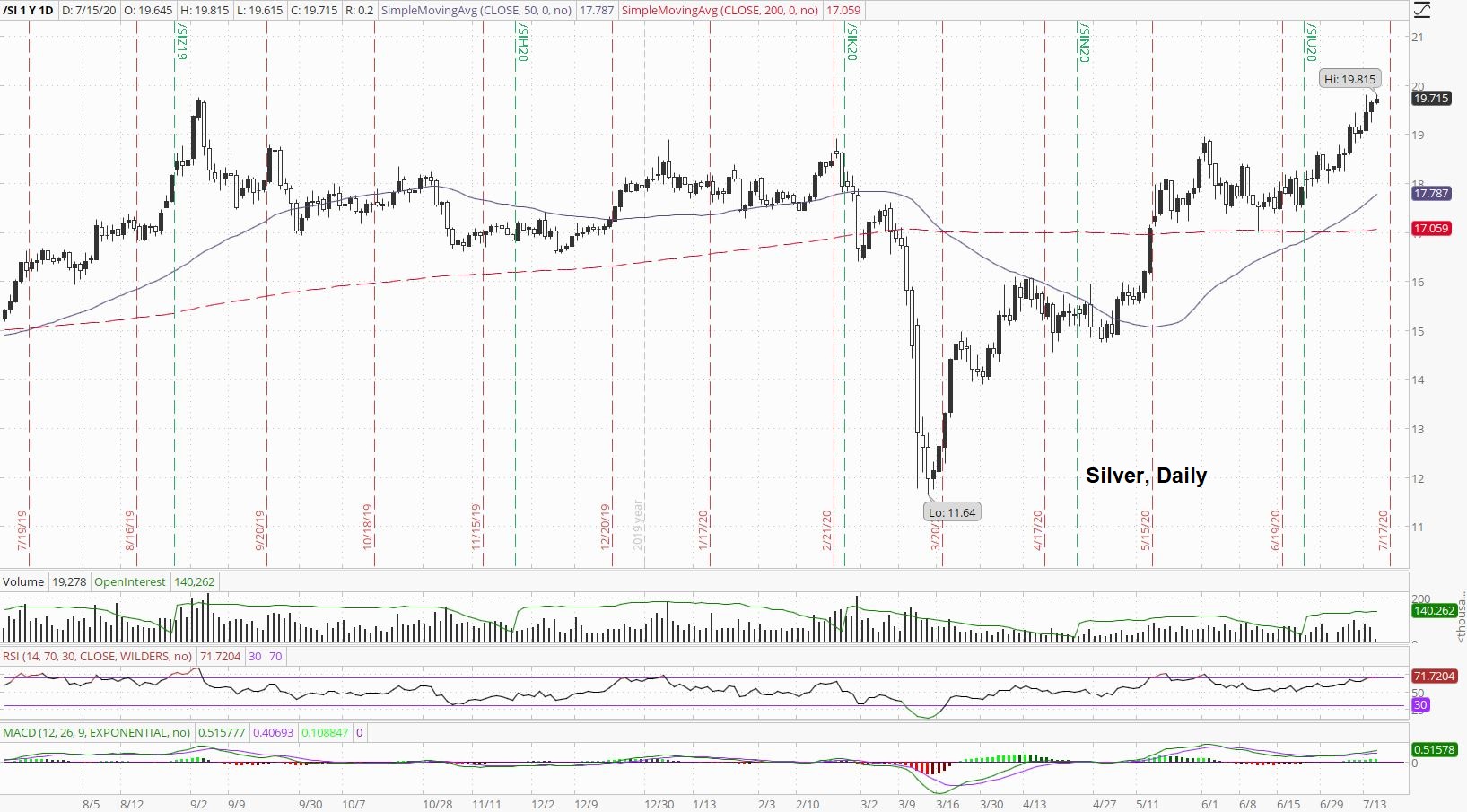 Silver has invalidated the bearish head-n-shoulders chart pattern set-up and rallied 16.46% since mid-June!

If I could argue the bullish case in silver right now, it would not be technical, but fundamental.

There are three big, fundamental reasons why silver has rallied, and in no particular order, they are:

Gold has been holding nicely above $1800: 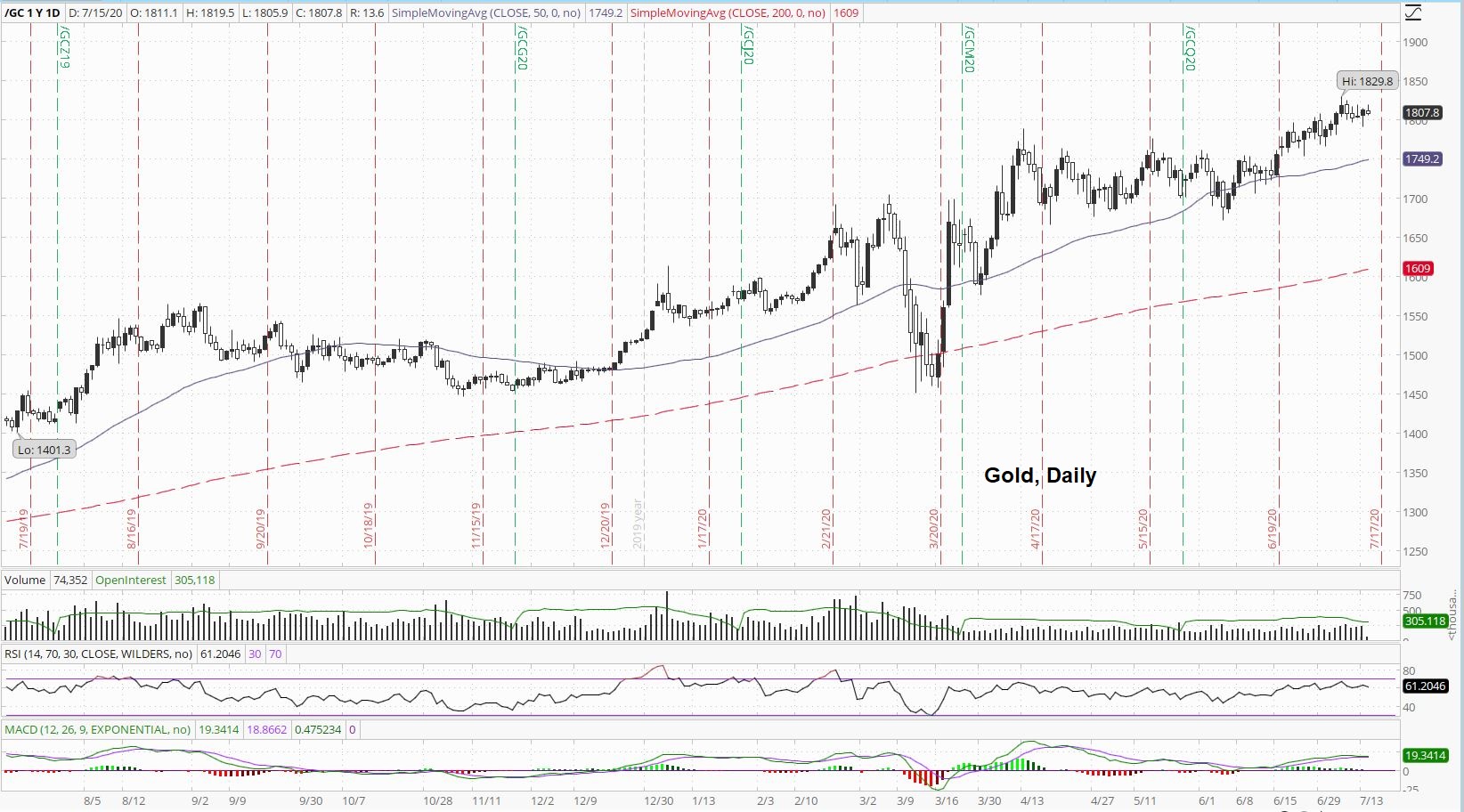 This is bullish for silver.

Gold holding above $1800 is a way of validating gold's nice run, which actually began a week earlier than silver's. That is to say, gold has been rallying since June 5th, or, as the saying goes, "gold moves first, and silver follows" (spoiler alert: the saying also goes "then silver outperforms gold"). Furthermore, $1800 was multi-year resistance, but having broken through the resistance level and having held there (this morning included) for many days, one can argue $1800 gold now supports.

And what is gold doing now?

Gold is arguably consolidating with $1800 acting as support, and, as gold consolidates, which is another way of having a pullback over time instead of price, silver is not only finally playing catch-up, but now outperforming gold, which has rallied 9.45% since early June.

The bottom line is this rally has played out in textbook fashion, and we see silver playing catch-up with gold on the Paper Gold-to-Silver Ratio Daily Chart: 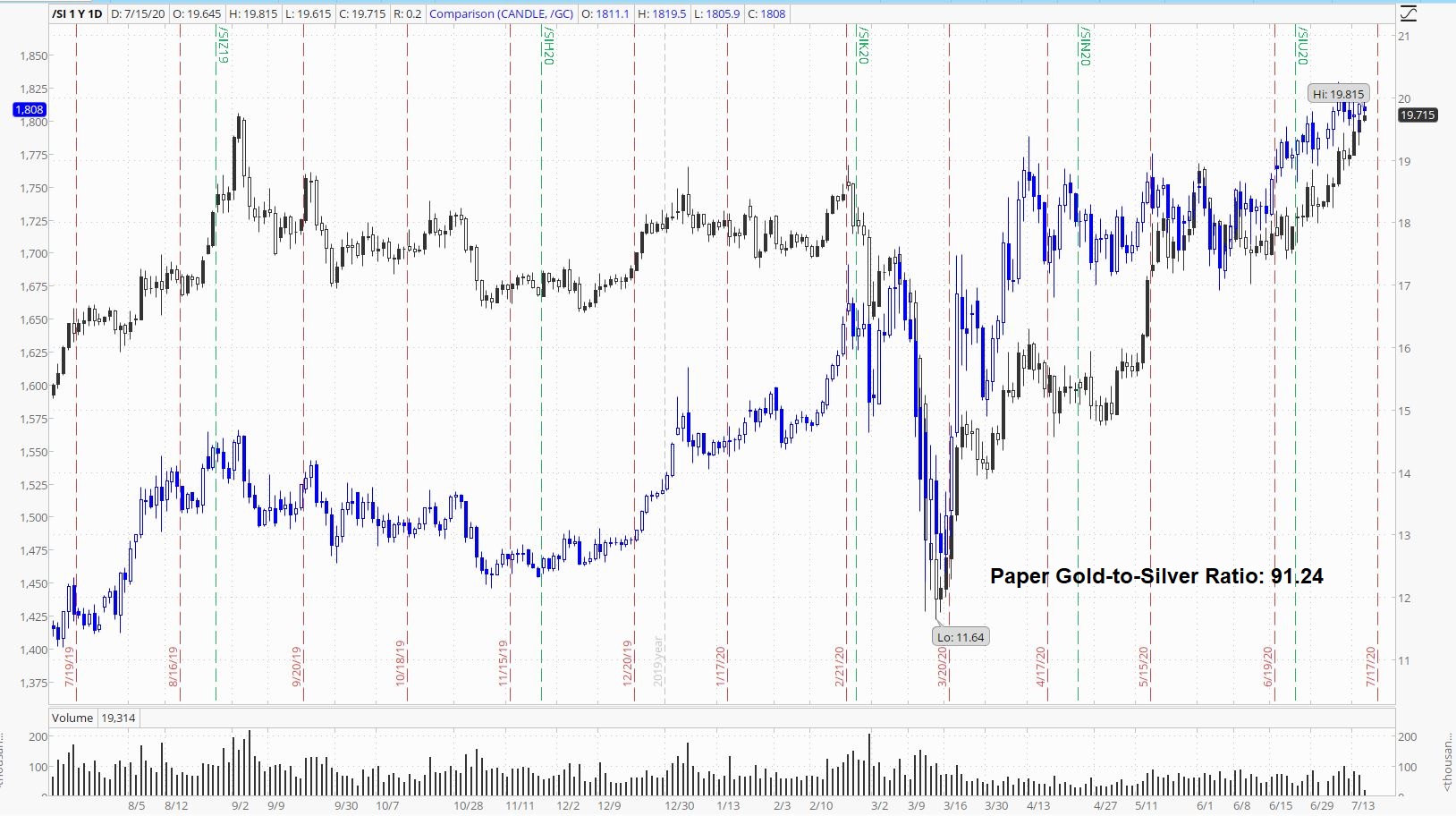 Silver has now fully re-coupled with gold on the chart, and the next time it de-couples, assuming silver keeps outperforming gold, it will show silver de-coupling from gold to the upside.

So here's the question: Does silver have more upside, is the move over, or are we now set for the pullback?

There has been an increase in stock market uncertainty on a fundamental level, and this is arguably bullish for silver.

Specifically, Fed officials have been talking about (for a week now) reducing, or even stopping, "Fed purchases" as well as not leaving "emergency lending facilities" in place is market conditions improve.

And, well, the stock market is at all-time record highs, so it's kind of hard to argue that market conditions have not improved: 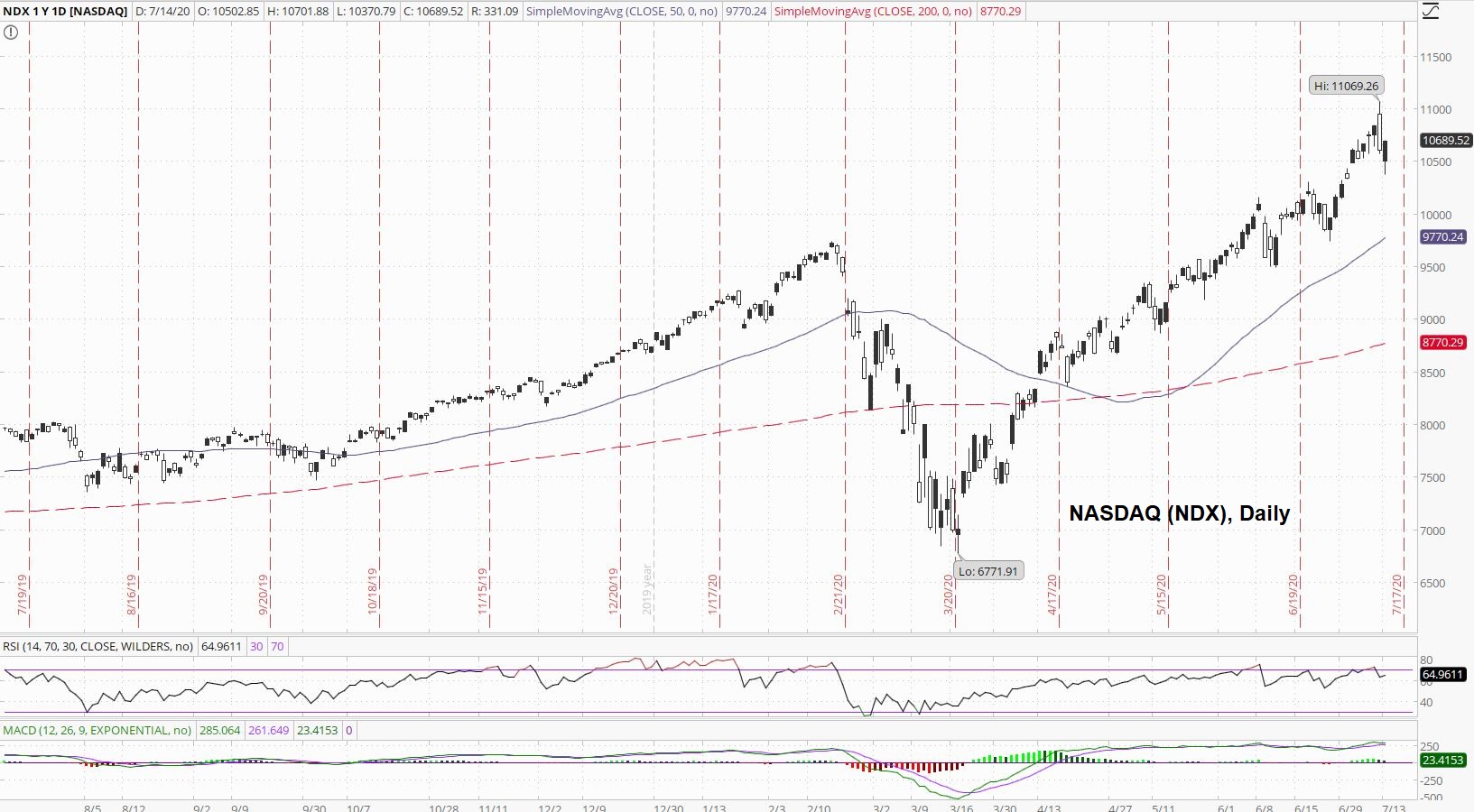 Of course, when the Fed is talking about functioning market, market conditions, and other concepts such as that, what they really mean is making sure the markets only go up, because the whole purpose of the Fed's market interventions is to keep it moving higher.

Market participants, however, seem to not believe the Fed will actually remove its support, as reflected by the fear gauge: 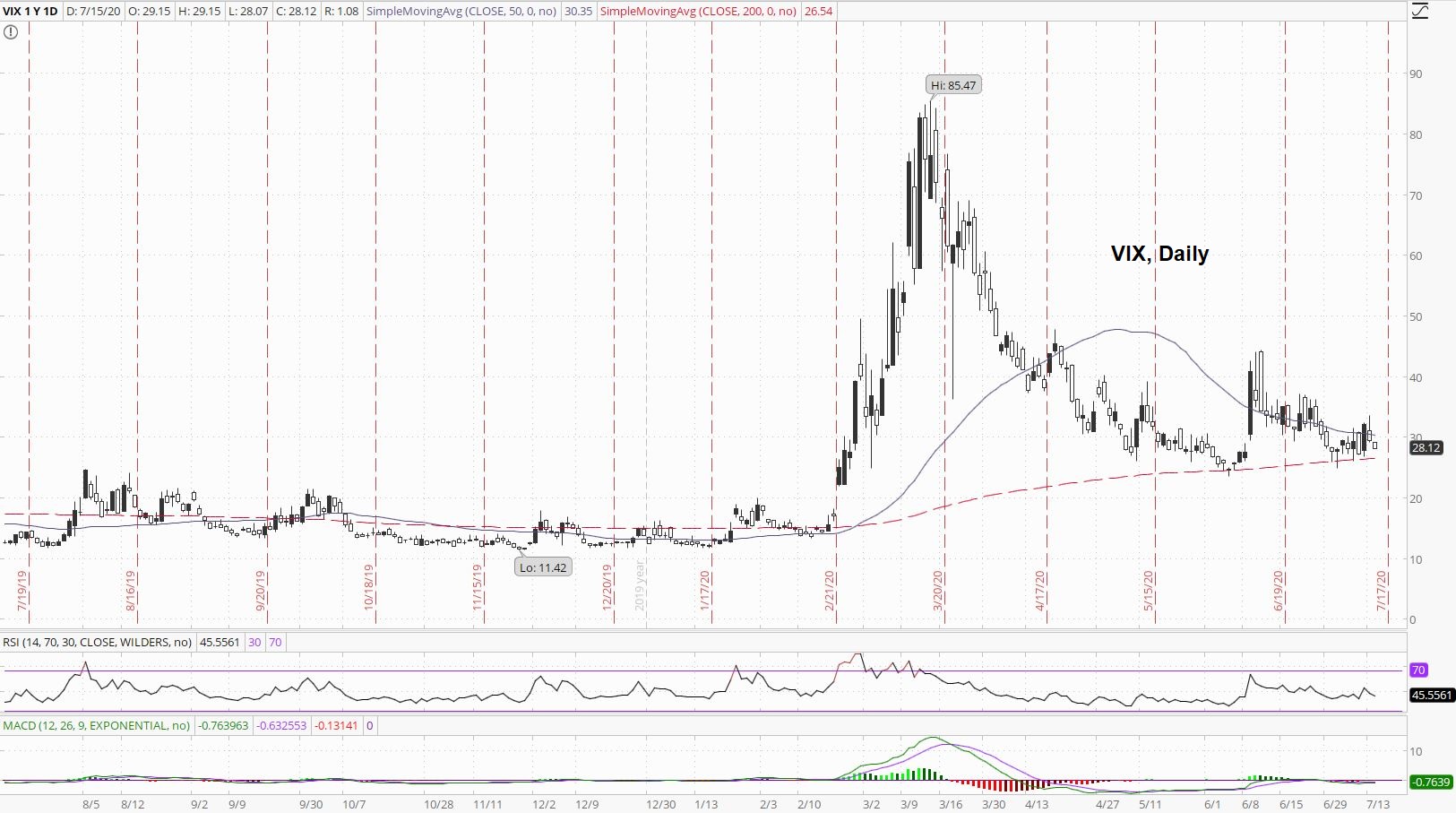 The question is, does the Fed truly have that much power to make sure the stock market cannot crash, and if not, what does that mean for the VIX?

Regardless, the whole concept of whether the Fed will, or will not, continue its interventions, or not, and to what degree, is simply some good old-fashioned "market uncertainty", and silver is a hedge against uncertainty.

In many parts of the USA, shutdowns have been reimposed due to the coronavirus epidemic.

In no particular order of importance, consider the following three examples - The Ivy League, California, and New York.

Last week, the Ivy League announced that all Fall Sports would be cancelled. This is a big announcement, and many people think other leagues and conferences will follow suit. In fact, one US Senator called on other conferences to do the same.

On Monday, California Governor Newsom announced closures for all of California or for most of California, depending on what he was ordering shutdown.

Those 30 counties include all the major counties as far as economic activity goes.

Those are not good developments when it comes to the recovery on Main Street in general, and affected Smal Business Owners and employees specifically.

Across the country, we see the Governor of New York has expanded the list of States from which travelers must quarantine for 14 days: 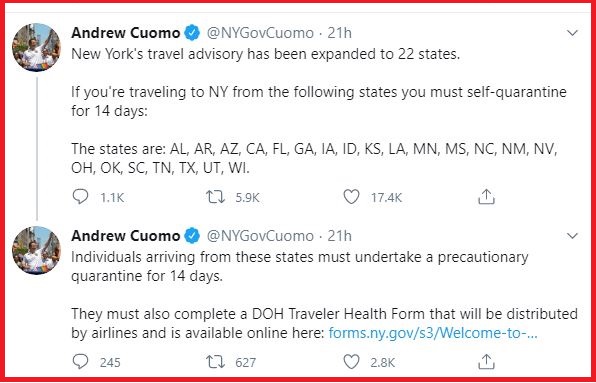 Suffice to say, this also has an adverse effect on economic activity on Main Street.

When we see so much disruption in the US economy, caused in large part by the shutdowns and the quarantines, this really speaks to more pain ahead just as many places were beginning to re-open. It also speaks to more deficit spending, more money printing, more debt accumulation, and all of those things that lead to the debasement of the currency.

Silver is a hedge against currency debasement, which is why we're finding that support above $19.

With all of those fundamental factors discussed today, it is no wonder why the US Dollar Index doesn't look healthy at all: 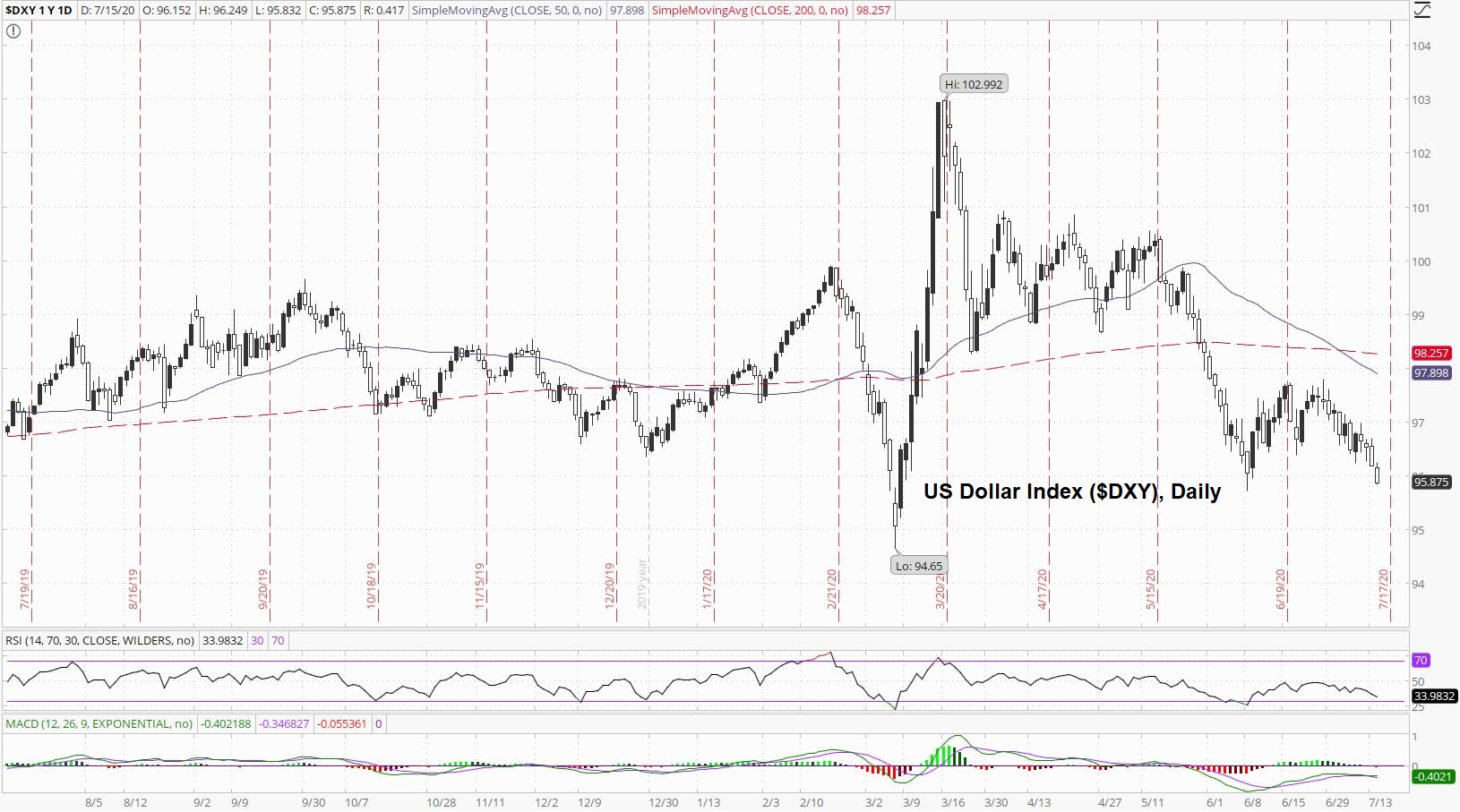 If the bottom drops out of the dollar, I may have to zoom-out on the chart next week.

Interestingly, zero-point-six percent on the 10-Year Note it is, still: 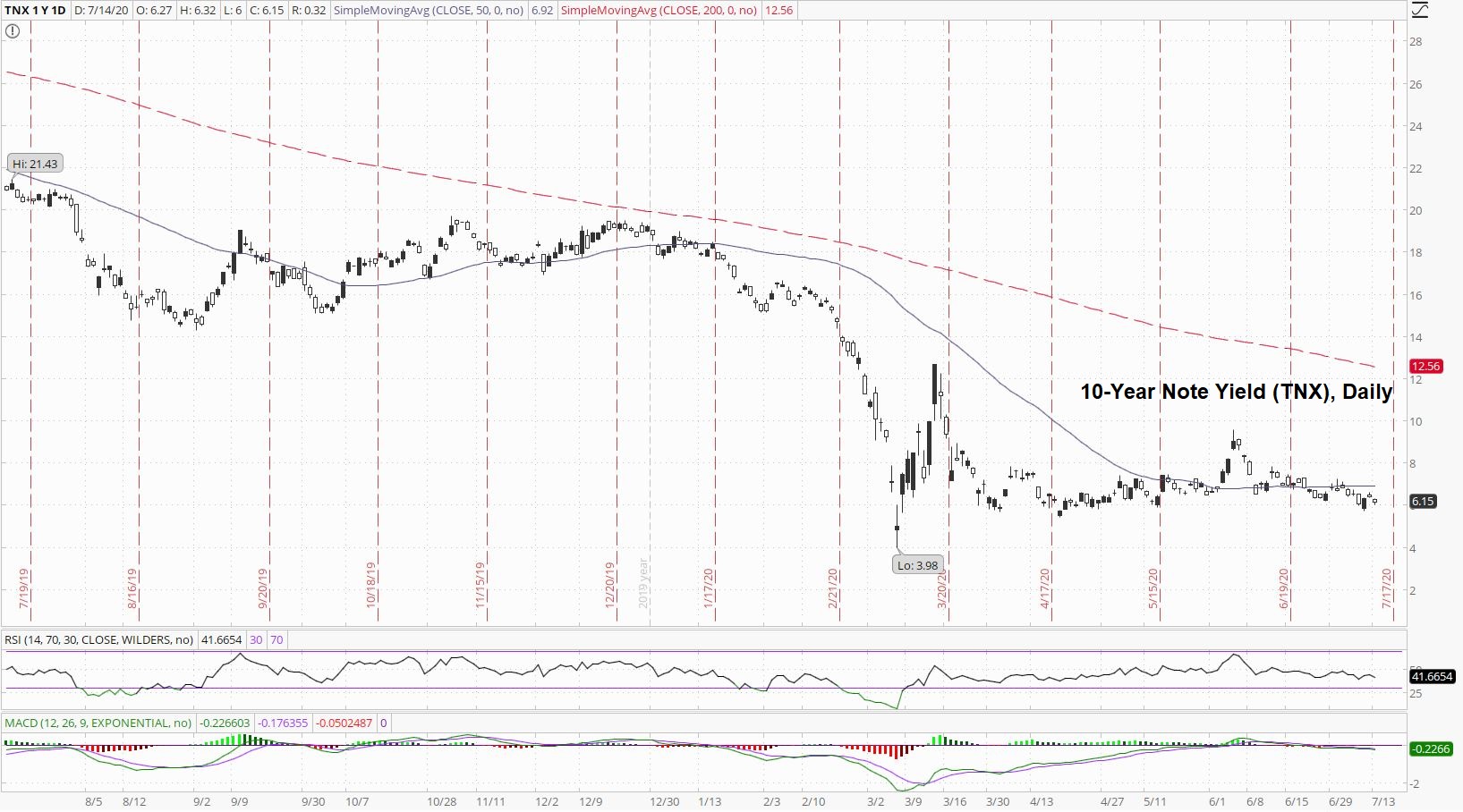 If the stock market does come down, however, we could see yields take another leg-down.

The price of crude oil is barely moving: 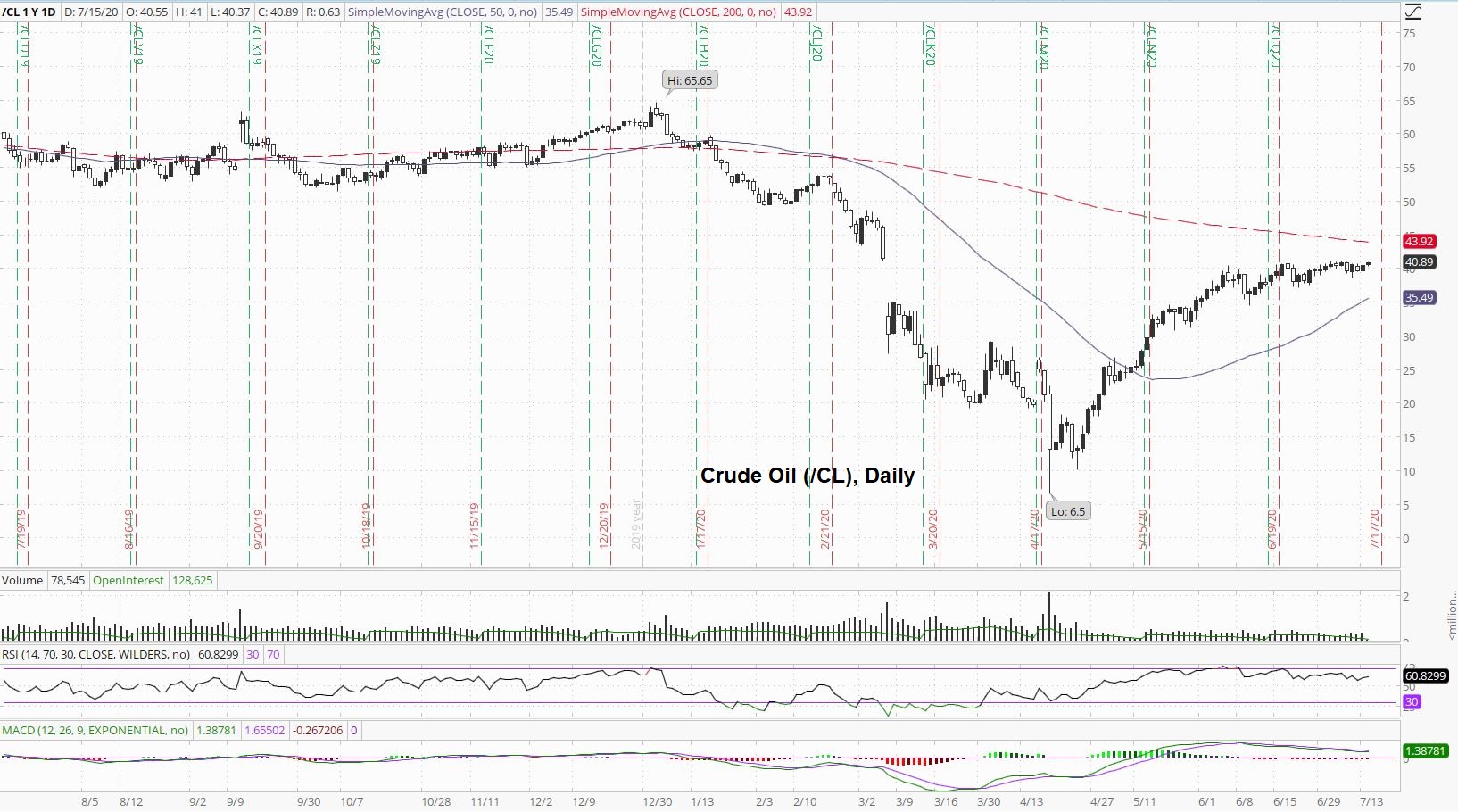 Are we consolidating here at $40, and if so, in preparation for a move in which direction?

Copper hasn't been waiting to find out: 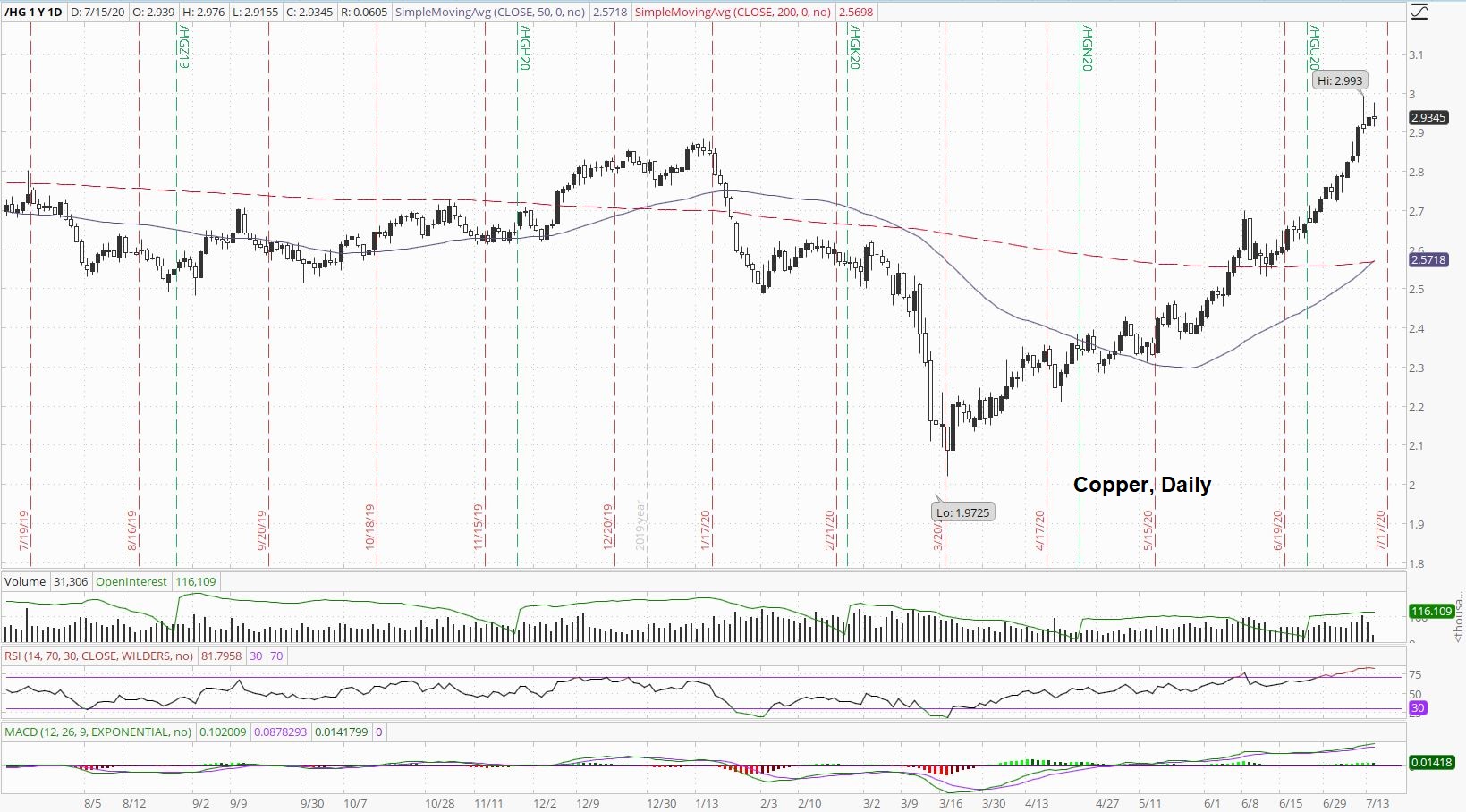 Palladium may be having some trouble at $2000: 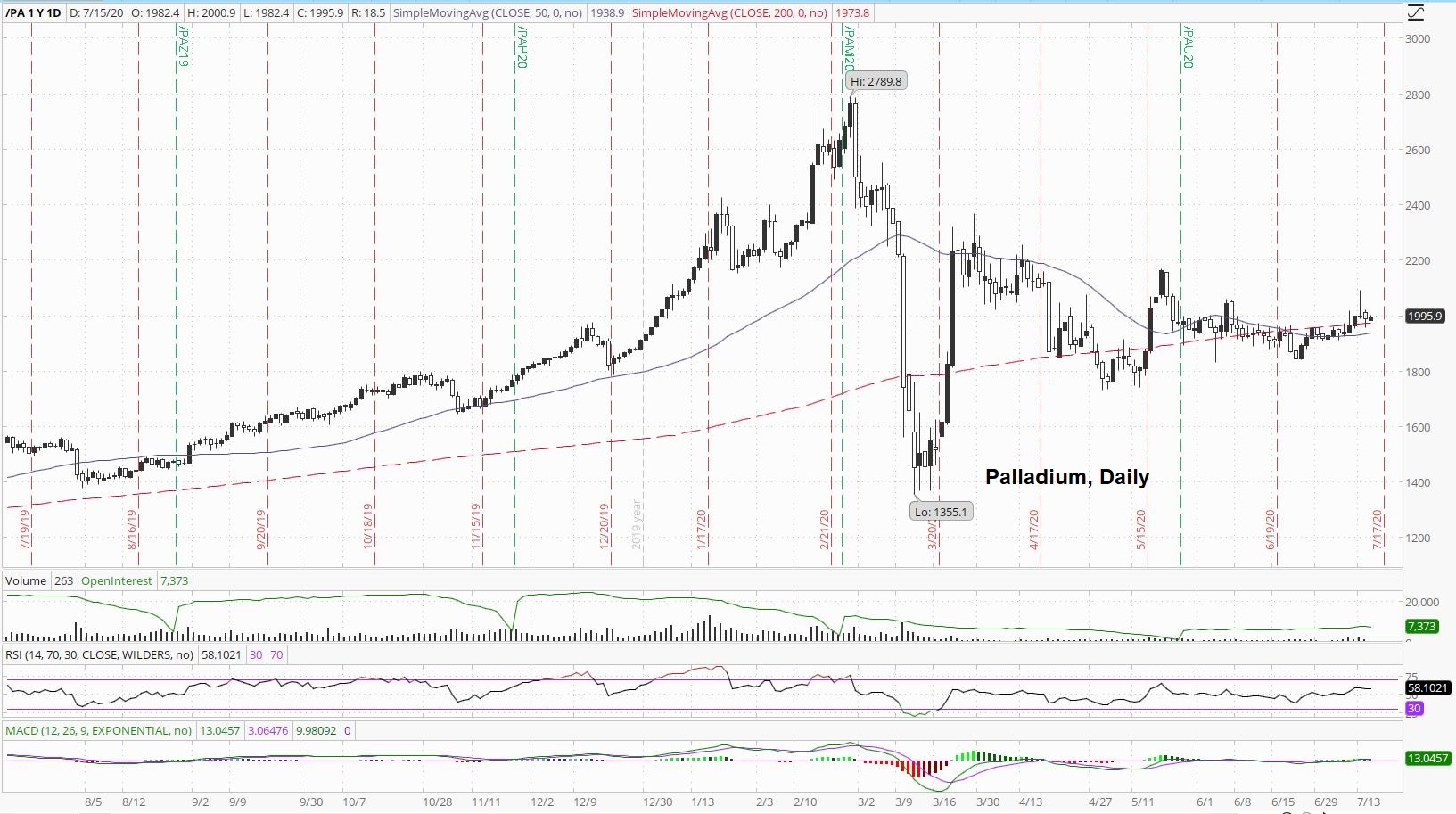 The technicals are basically flat, so we could really be getting ready for either a break-out or a break-down, however, since palladium meets all of the requirements to be money, and with so much currency debasement and debt creation taking place, sooner or later, arguably, palladium will catch the flight-to-safety bid.

For now, however, palladium is taking a back seat, but let us not forget that palladium is what perhaps carried the wounded precious metals bulls through the last several years. 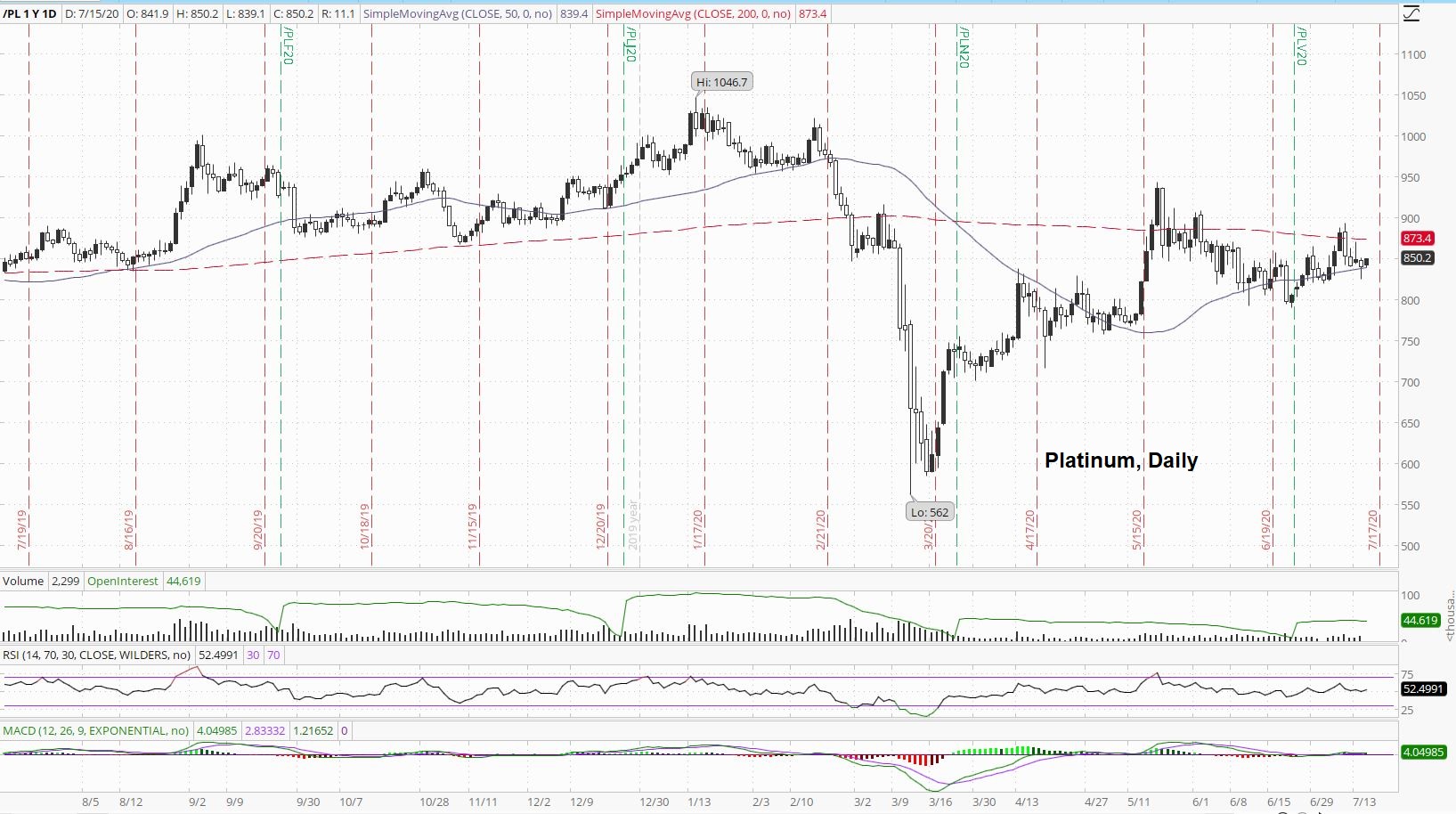 Platinum is still down nearly 14%, year-to-date, and as silver breaks-out above $19, as palladium treads water, and as gold finds support at $1800, platinum just may be the sleeper value investment of the year!

But it may not be that way for long.