A few things seem to be maintaining the bid on gold, and they're all fundamental in nature. Perhaps this is one of the reasons many technical analysts keep calling for deeper pullbacks which continually end up being both shallow in price and short in duration?

The question for the technical analysts now would be, has gold confirmed it's a move above $1800?

Regardless, fundamentally speaking, in no particular order:

This has caused some state Governors to react by delaying or even scaling back the so-called "re-opening". Additionally, international relations remain stressed with travel restrictions and warnings affecting many nations. Suffice to say it is debatable whether the economic recovery has begun, or is still in a state of decline. Either way, gold is a great hedge against this type of uncertainty.

The US stock market continues its relentless rise. 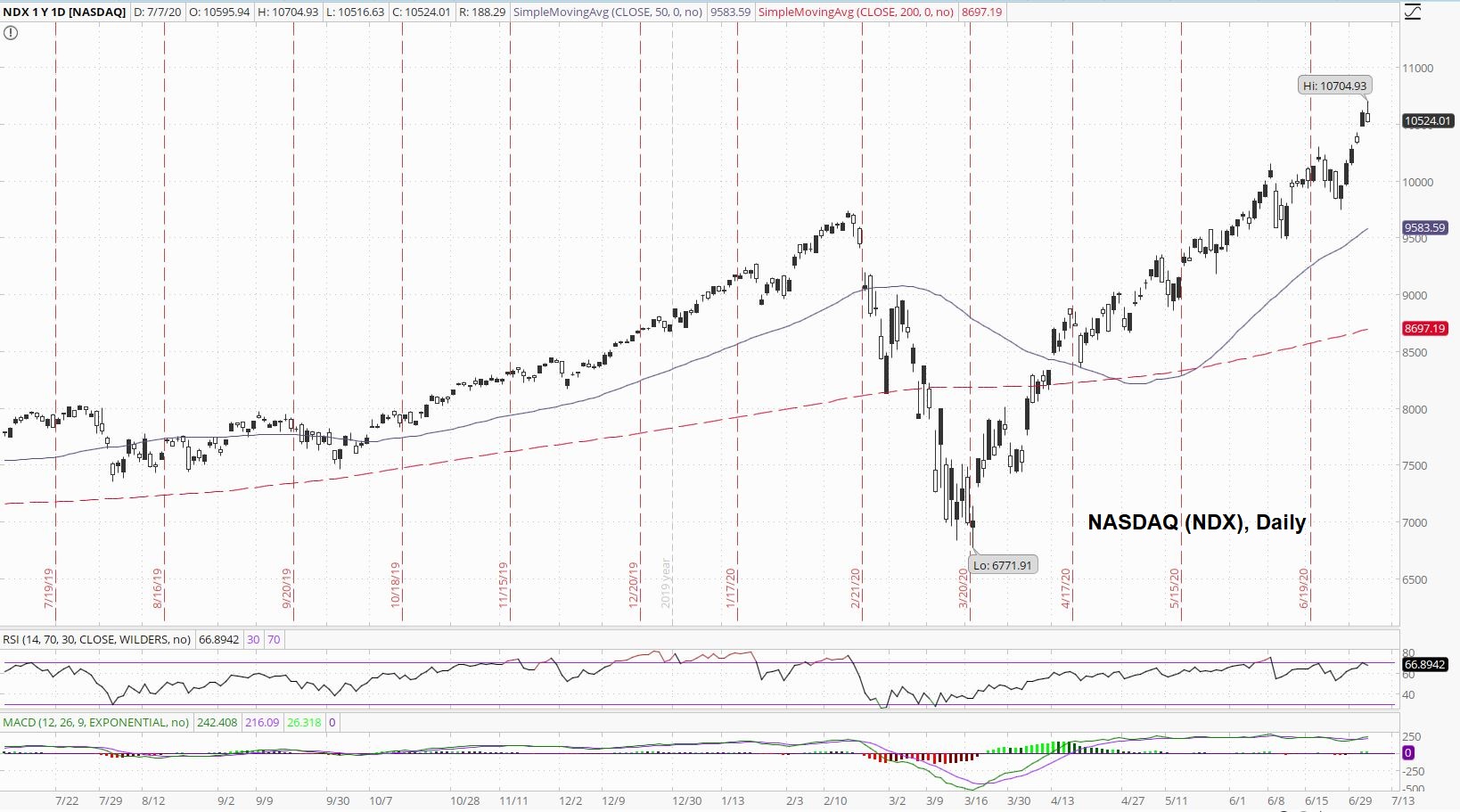 If it is true that the market is in a state of euphoria, led mainly by newbie retail traders, then arguably the "smart money" would rather not be attempting to short this market, but rather, the smart money would be finding a hedge that's safe. In other words, it is difficult to know exactly when the market euphoria will fade, and, perhaps more importantly, how it will fade, and as such, traders and investors can protect themselves from the downside in the financial markets with a safe have an asset.

Gold and silver are safe-haven assets.

Shockingly, or not, depending on's perspective, the Fed Vice Chair (Richard Clarida) came out with quite the statement yesterday.

From Reuters (bold added for emphasis and commentary):

There is “no limit” on how many bonds the U.S. central bank can buy...

Not only is the Fed going to be doing more stimulus, but there is apparently "no limit" on how many bonds the Fed can buy!

If the Fed keeps its permanent bid in the bond market, generalized with the 10-Year Note's daily chart shown below, the pressure on interest rates will be down: 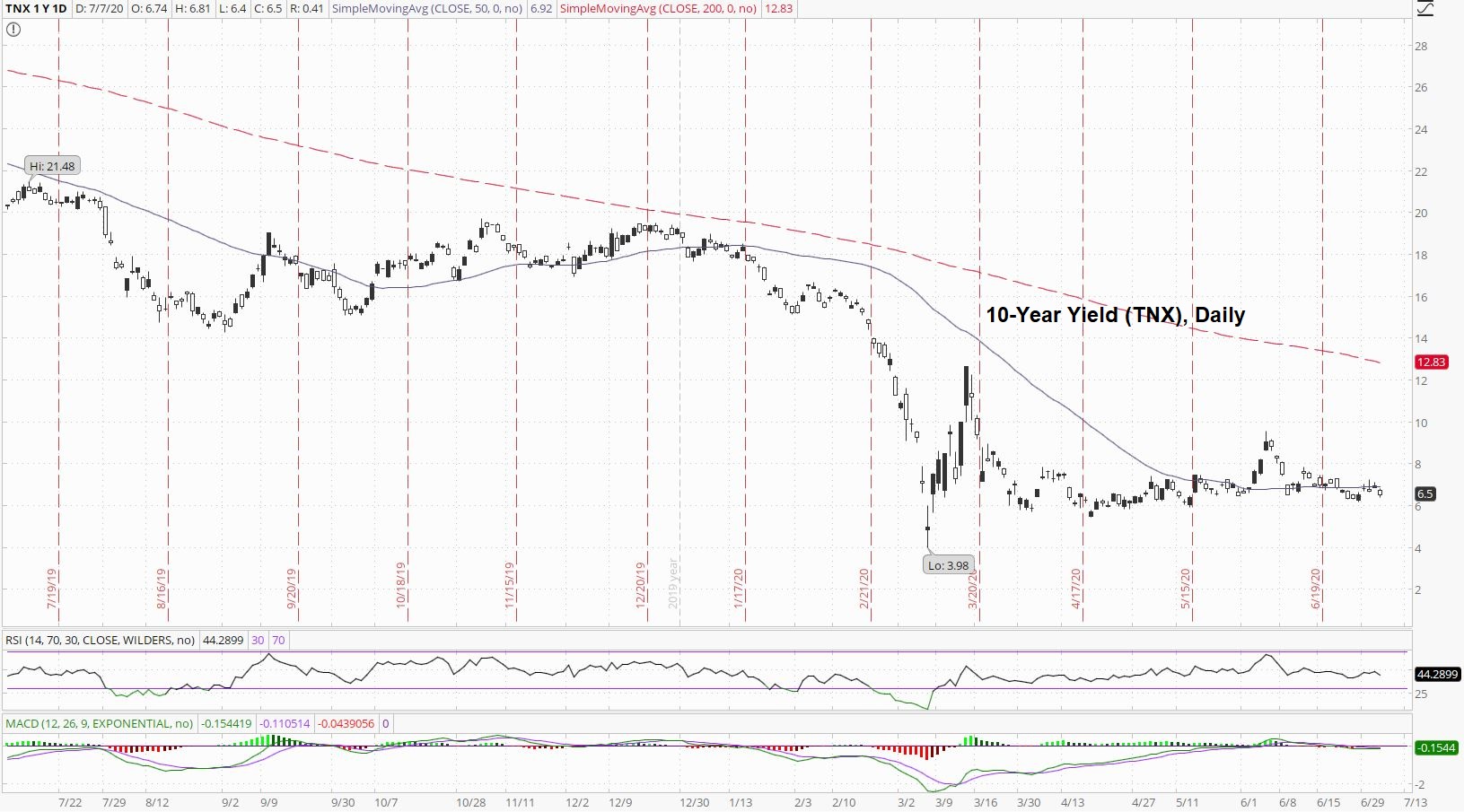 Furthermore, it is commonly understood that if there is a crash in the stock market, traders and investors will seek-out the "safety" of the US Bond Market, which further places a bid on bonds, pressuring interest rates even lower as the price of those bonds is bid higher.

Still, the Clarida's words speak to debt monetization, something which cannot be good for the US Dollar: 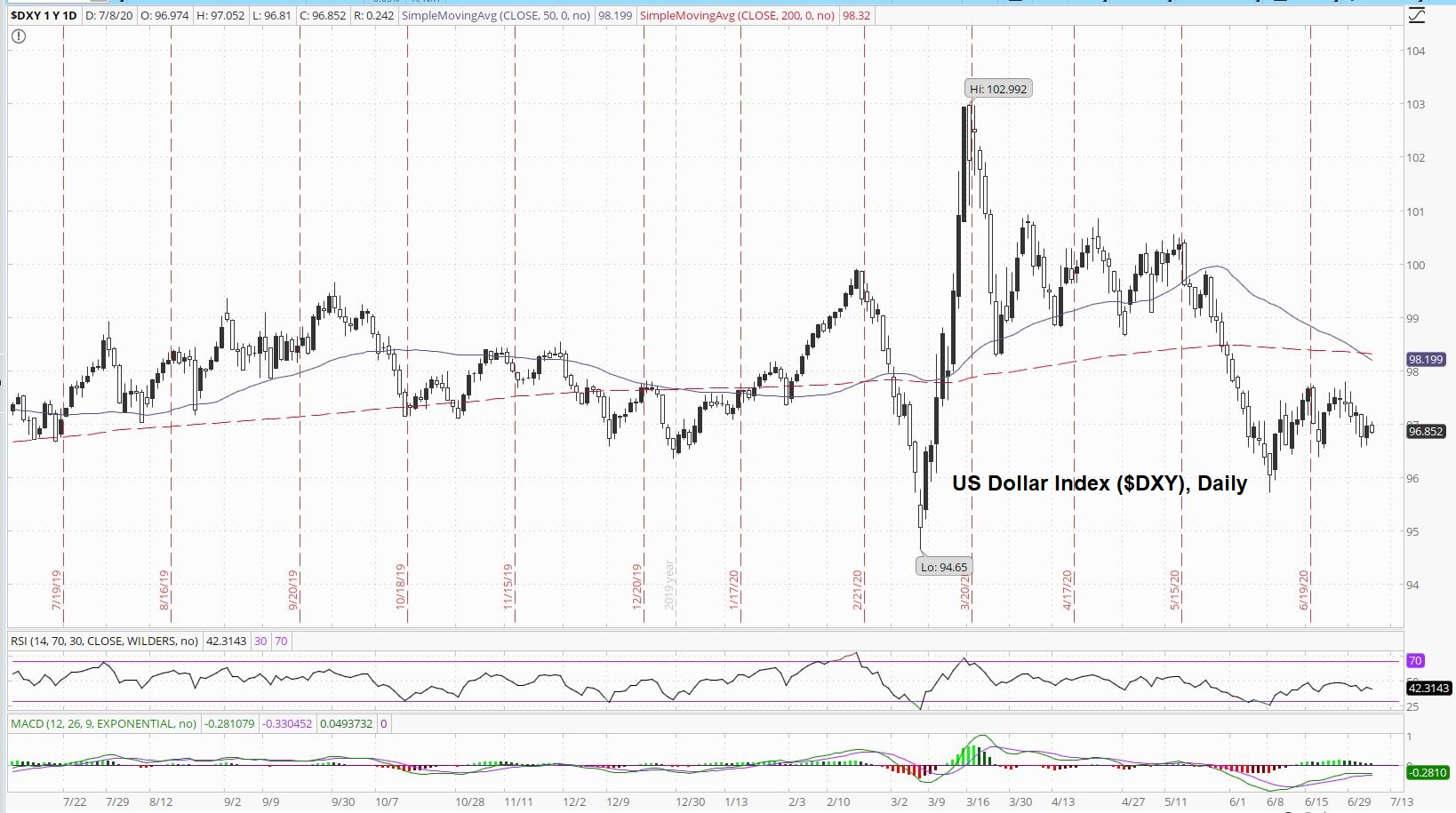 Because debt monetization and currency debasements are one and the same.

Traders and investors seem oblivious to all of this risk out there: 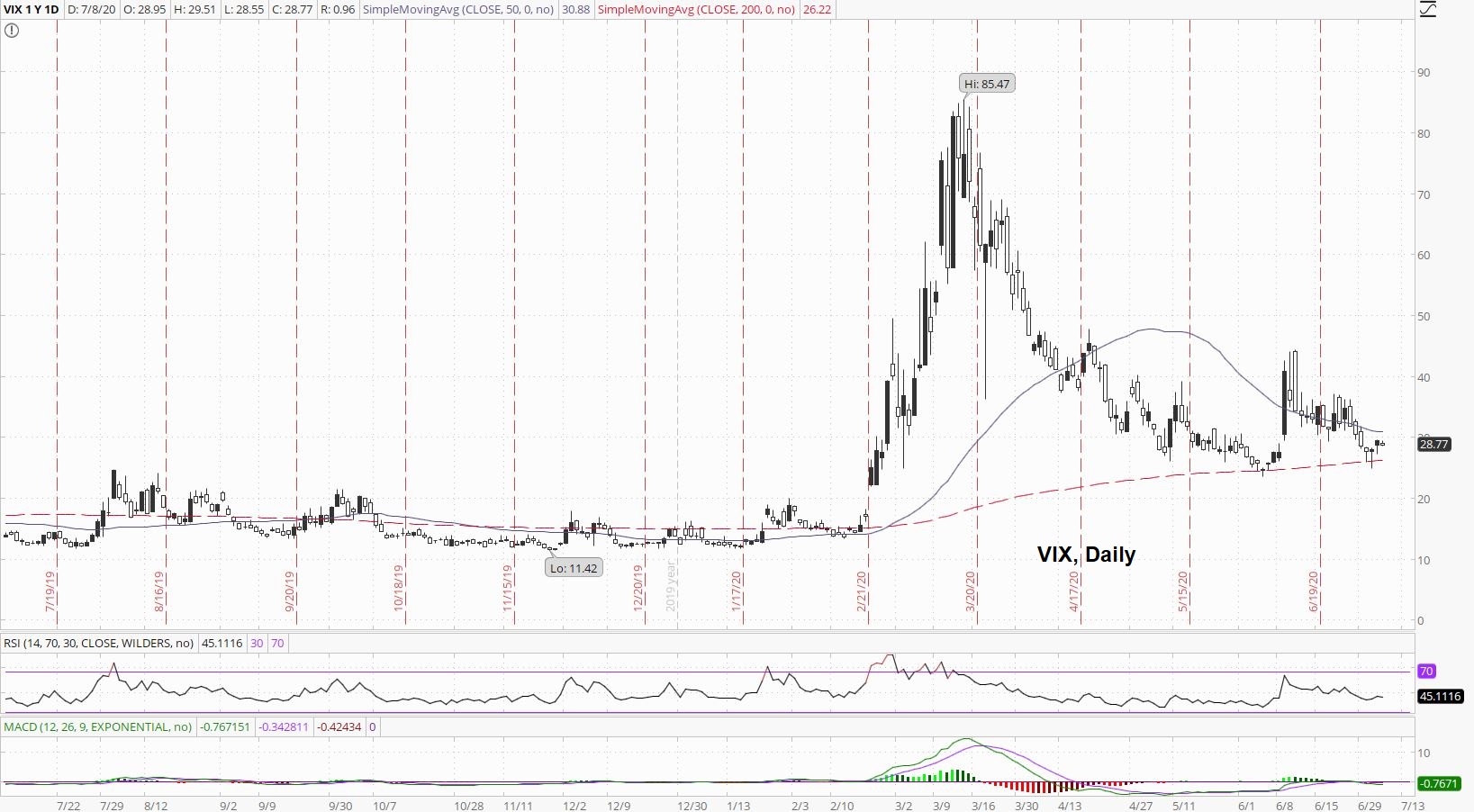 There has been only one minor spike in "fear" since the stock market began crashing in the second half of February.

And so the bottom line is that it sure looks like we're in the "calm before the storm", and judging by Clarida's words spoken just yesterday, it's a hyperinflationary, currency debasement storm.

And here's the thing about that: You can't print gold.

So smart investors are finding protection from all of this ongoing and incoming "money printing" by turning their fiat money into real money, which can't simply be printed or double-clicked into existence, gold & silver.

The commodities look like they're pricing in all of this monetary inflation: 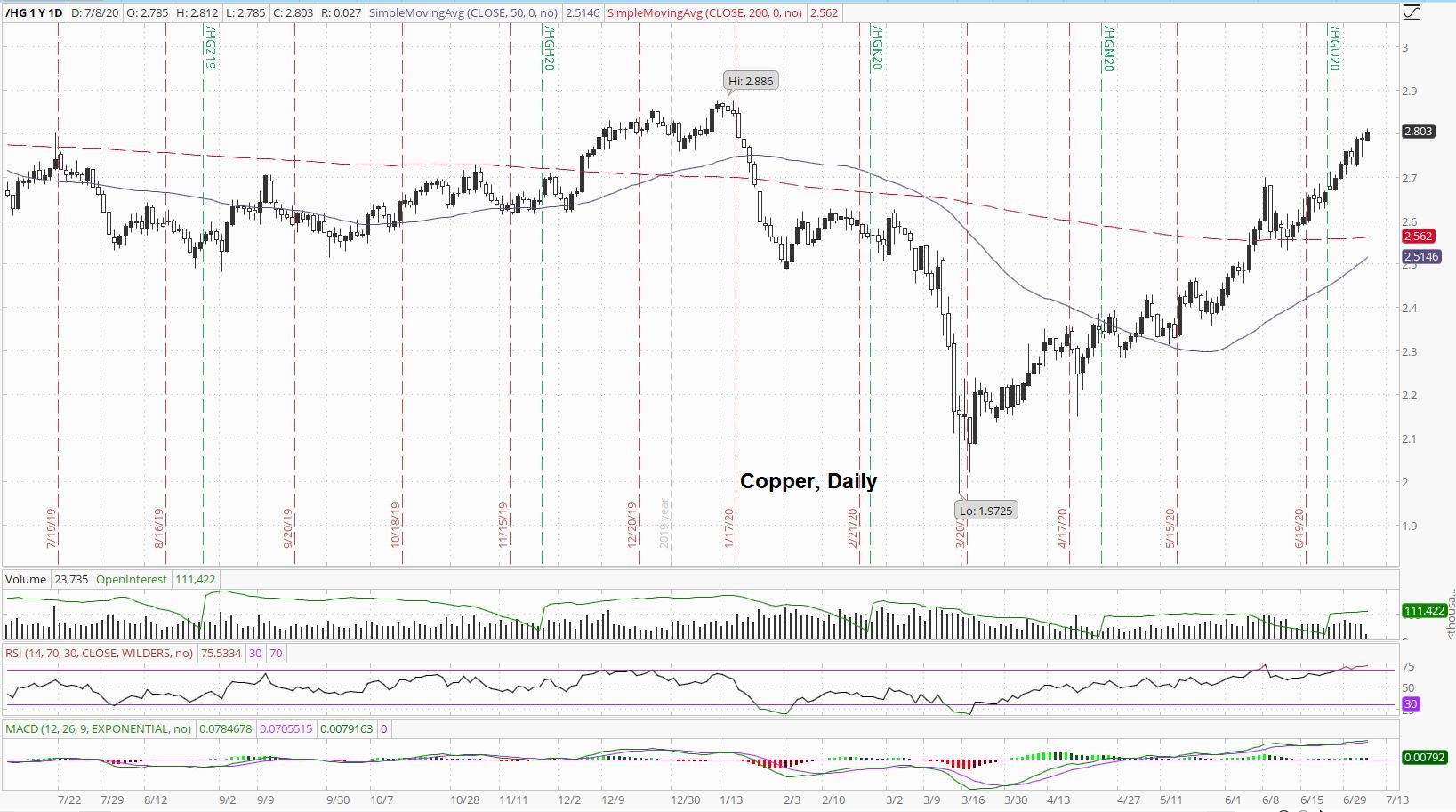 Copper has finally clawed its way back to "unch", year-to-date.

Crude oil continues to consolidate at around forty bucks: 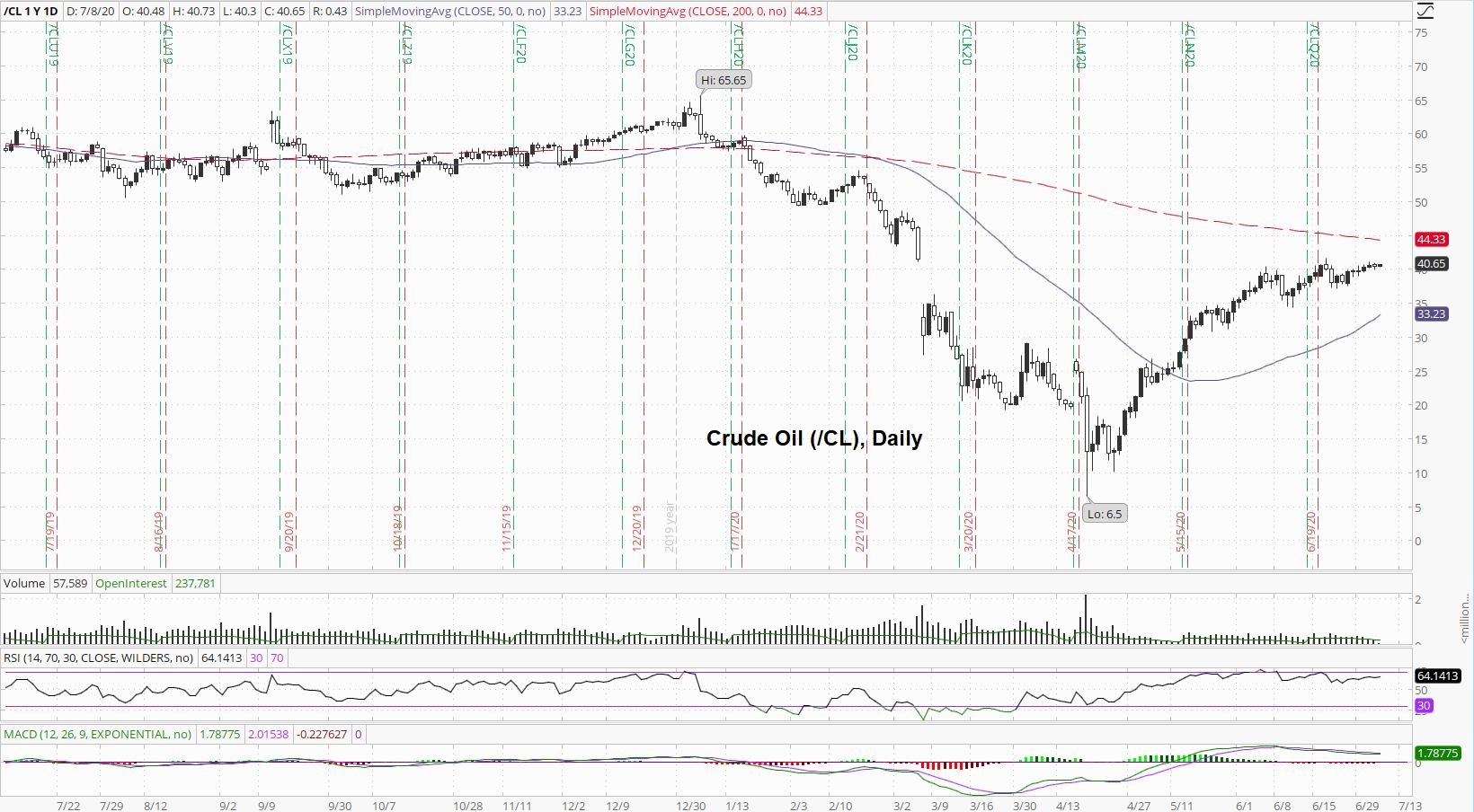 While crude oil's price is barely moving, major destruction is taking place in the US Oil Industry.

Platinum continues to be the odd-ball out when it comes to the precious metals:

Platinum is still down over 10%, year-to-date, but to the smart, willing & able investor, there is tremendous value in platinum which could, arguably, see a quick reversal in price (to the upside) if it is true the precious metals are rallying and platinum needs to play catch-up.

Of course, calling platinum the oddball out does not mean all of the precious metals are performing spectacularly: 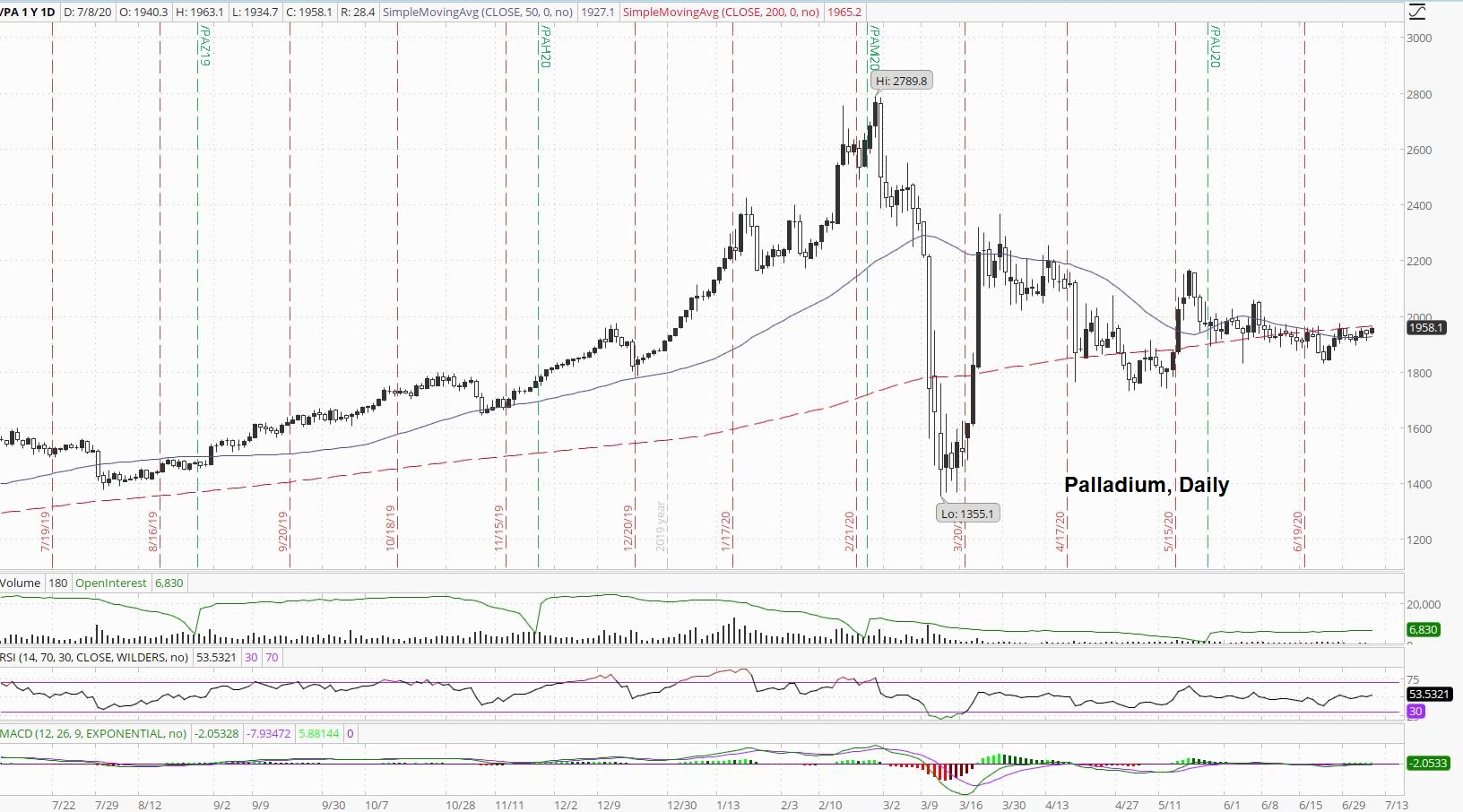 The paper gold-to-silver ratio continues to show a print in the mid-90s: 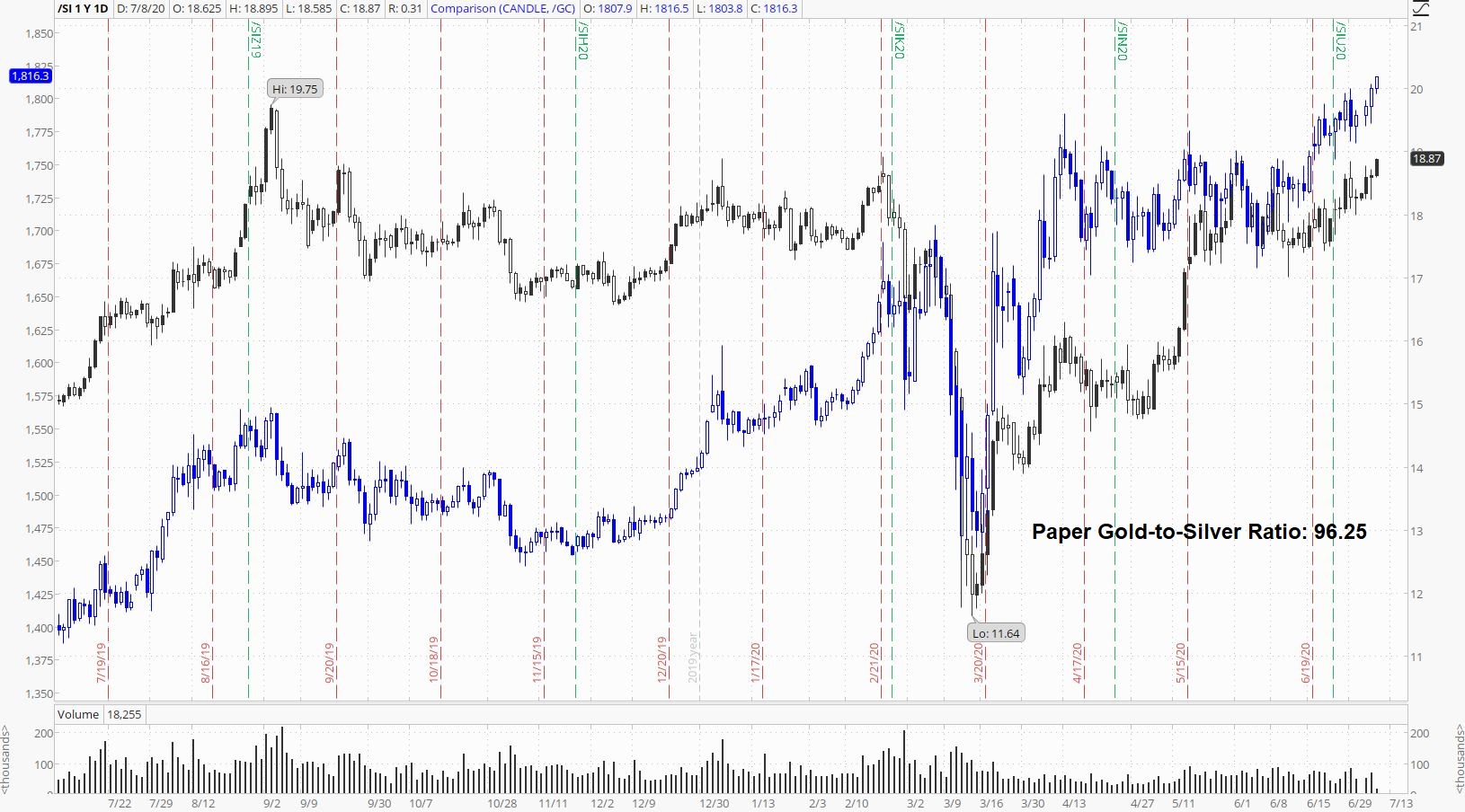 We may not be talking about the mid-90s for long, however. 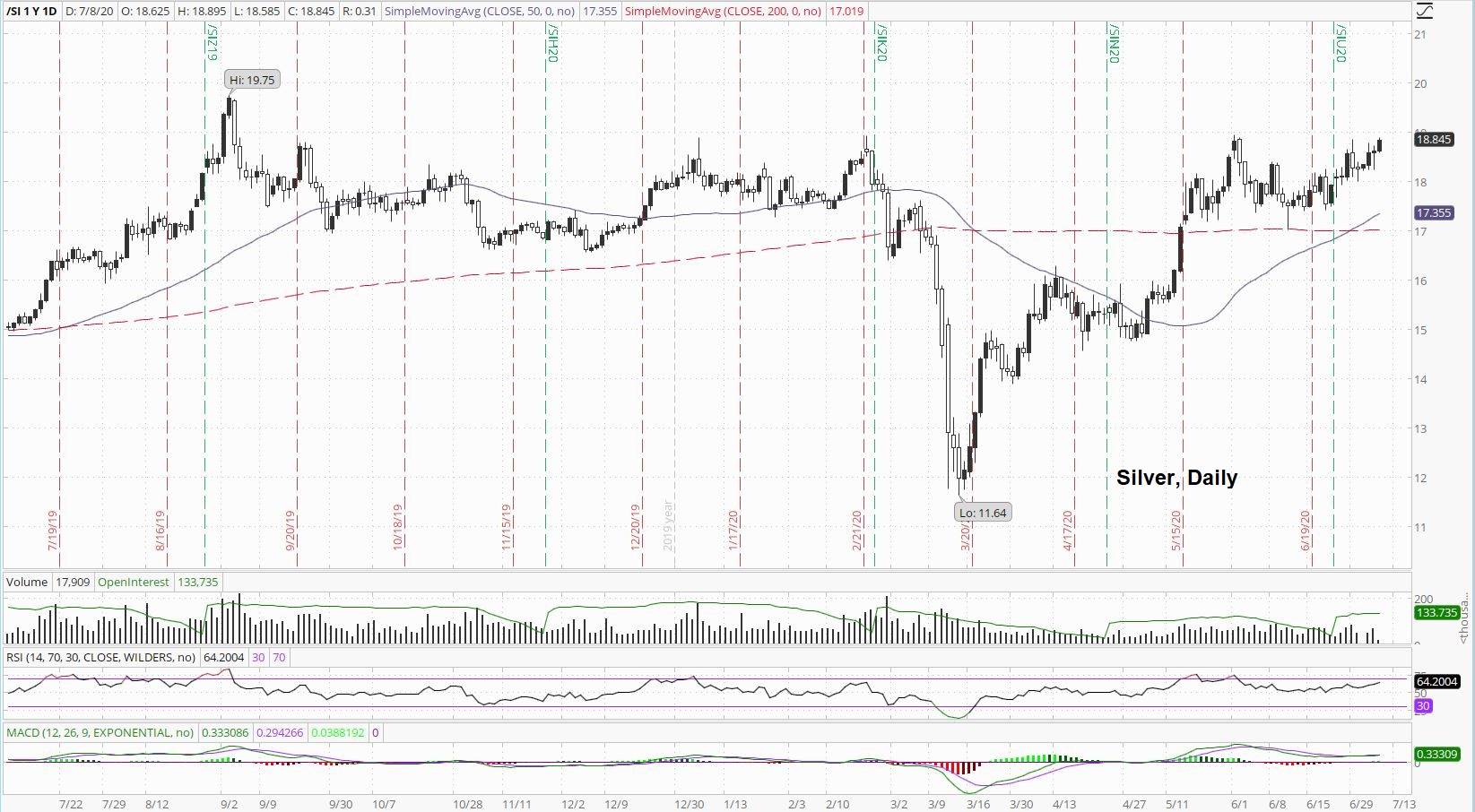 I also say that in part because, arguably, $1800 gold has been confirmed: 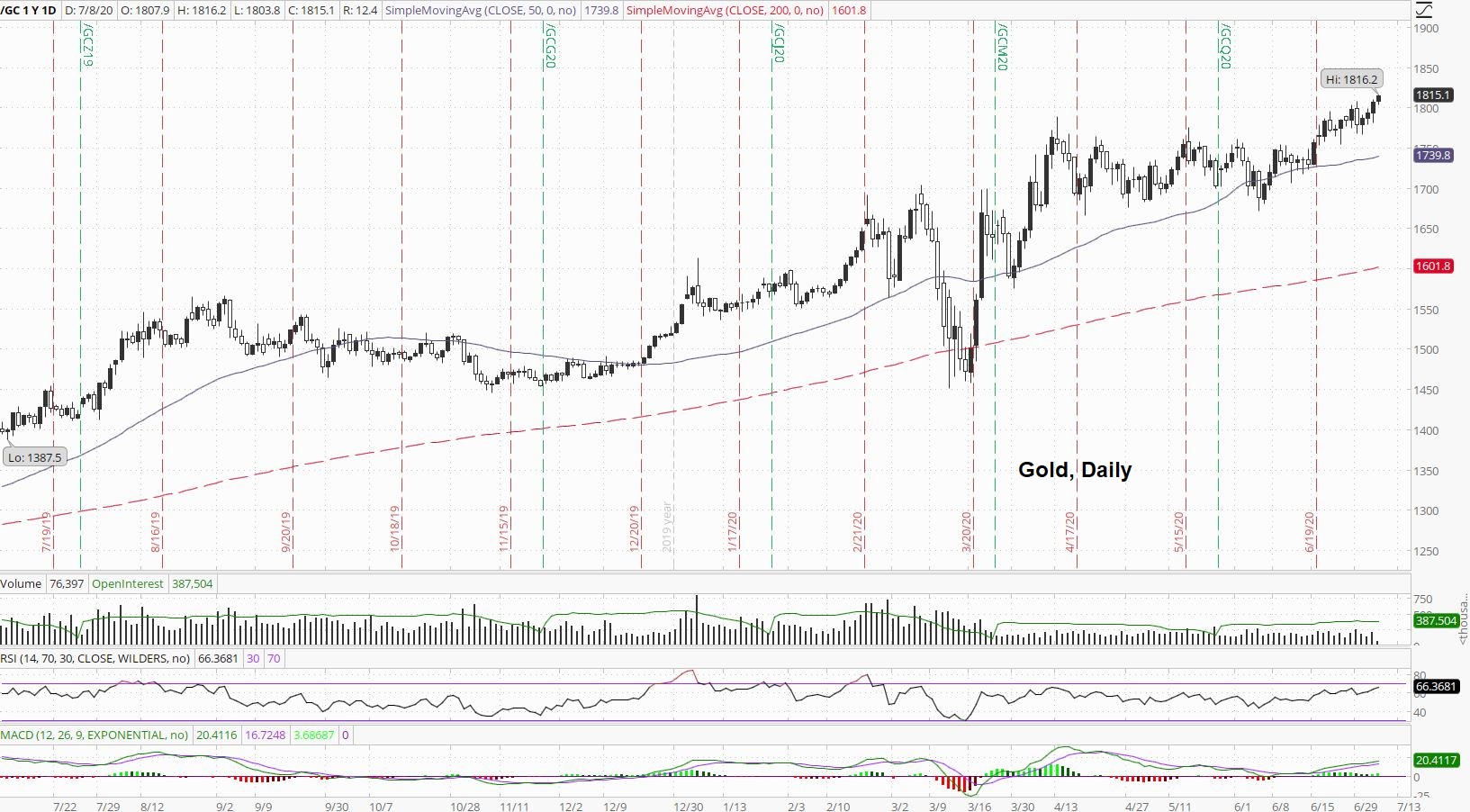 Certainly, it has been confirmed on a fundamental level.