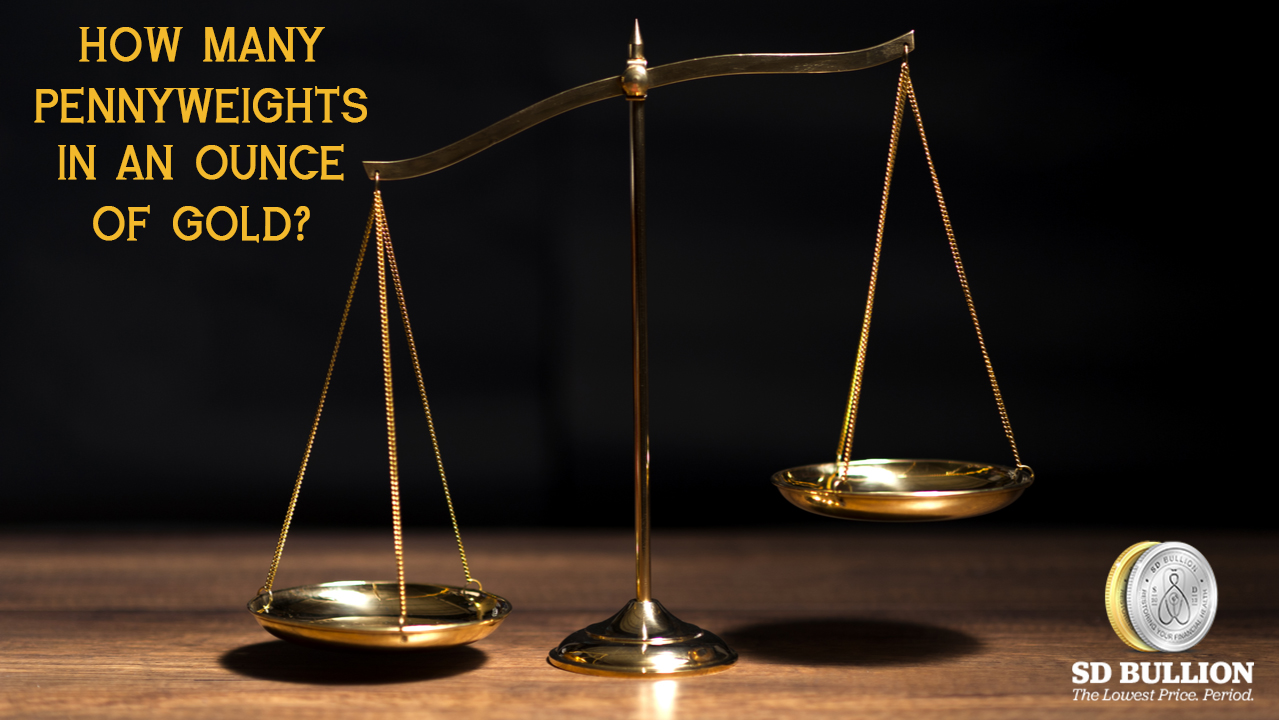 How Many Pennyweights in an Ounce of Gold?

Gold is the most precious metal of all. It is also one of the rarest and most expensive.

The high price of gold, along with its high malleability, means that gold is often used in exceedingly small amounts, such as when making jewelry. Or as a very thin layer on an astronaut’s helmet's visor to protect their eyes from the unfiltered sunlight in space.

Whatever the use, where gold is concerned, you can generally be assured that you’re dealing with minimal amounts.

Which begs the question, how are these exceedingly small amounts of gold and other precious metals measured?

The answer, the old English troy weight measurement system, and most notably, the troy ounce and pennyweight.

Although slightly heavier, the troy ounce is very similar to the standard ounce we all use in cooking. But the pennyweight? That’s probably a unit of measurement you’re completely unfamiliar with.

So, let us dive into how gold is measured, the troy measurement system, and how many pennyweights are in an ounce of gold.

How is Gold Measured?

As already mentioned, gold is typically measured using troy ounces and other units of the old English troy weight measurement system. A troy ounce is slightly heavier than a standard ounce and is equal to 31.1034768 grams.

Check our post:  Ounce Vs Troy Ounce - What's the Difference?

Troy ounces are typically the main unit of measurement when it comes to precious metals, including gold. However, gold can also be measured in grams or kilos.

While grams are a pretty small unit of measurement, when it comes to precious metals, minimal amounts of the metal may also be measured using pennyweights or grains, which are also holdouts of the old troy weight system.

Now that you know how gold is measured, let’s delve into the troy weight system, and it is being utilized in the modern era.

The troy weight system originated in 15th century England and consists of the grain, pennyweight, ounce, and pound.

In 1527 troy weights were made official for gold and silver. Troy weights were also part of the British Imperial system of weights and measures established in 1824. The troy ounce was officially adopted as the weight standard for U.S. coinage in 1828.

All units of the troy system other than the grain account for different amounts of mass than the avoirdupois system, which we are all familiar with.

The troy pound is the largest unit in the troy weight system and is equal to 373.24 grams. A troy pound is approximately 21.53% lighter than a standard pound.

As previously mentioned, a troy ounce is equal to 31.1034768 grams and is about 10% heavier than a standard ounce.

The pennyweight stands out in the troy system as the only one of the described units of measurement that does not have an avoirdupois system equivalent and will be discussed in more detail next.

History of the Pennyweight

Although the troy pound and pennyweight lost their official status in the U.K. in 1878, the troy ounce and its subdivisions remained official. Despite losing official status, the pennyweight remains the common weight used in the valuation and measurement of precious metals, especially when it comes to jewelry.

Thus, while a pennyweight is no longer used with currency, it is still used to weigh tiny amounts of precious metals.

It is abbreviated with dwt. The d is for the Roman denarius, which was the abbreviation for a penny before the British monetary system's decimalization. You may also see pennyweight abbreviated as pwt or PW.

How Many Pennyweights in an Ounce of Gold?

So, how many pennyweights in an ounce of gold?

Thus, there are 0.05 pennyweights in an ounce of gold.

Gold has been considered a precious metal almost since humans first discovered it.

Something so malleable and rare lends itself to being used in small amounts, which requires small units of measurement to quantify and value it.

The troy weight system has been used since the 16th century to quantify gold and other precious metals, and the troy ounce is still commonly used today.

Another unit of measurement that harkens from the Middle Ages is the old English pennyweight, which became the troy pennyweight in the 16th century. The troy pennyweight is 1/20 of a troy ounce and is still used today to measure the quantity and value of precious metals used in jewelry and dental work.

At a gram and a half, a pennyweight of gold in bar form would be slightly bigger than a pushpin and would cost you about $90.

Now that you know how many pennyweights are in an ounce of gold, will you be purchasing one?