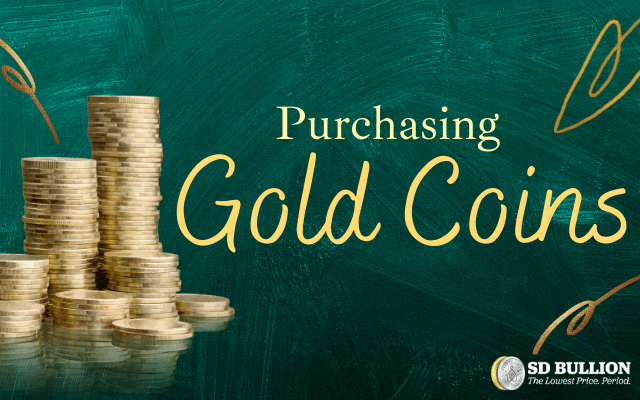 How to Buy Gold Coins?

Since the United States government decided to decouple the dollar from physical gold, fiat money became the norm around the globe and the era of the gold standard came to an end. As a consequence, the supply of paper money increased dramatically, making many countries more susceptible to inflation and hyperinflation.

No longer commodity money, physical gold quickly became an asset for a safe investment and a haven for those who were looking to secure their wealth and hedge against the ongoing inflation of fiat currencies.

The South African Gold Krugerrand became the first investment-grade gold bullion coin on the market in 1967. The idea was to popularize private gold ownership. By 1980 it was the most dominant gold coin of the global market. It led the way for other countries to start producing their own gold bullion coins.

Nowadays, gold coins have become one of the most popular ways of investing in gold. There is a range of designs, programs, and series to choose from. In this article, we will cover the basics of:

Why invest in gold coins?

Gold is a tangible asset and a commodity that is very rare on the crust of the earth. Gold alloys have many uses in dentistry, medicine, electronics, along with many other industrial sectors, especially the jewelry industry.

When it comes to investing in gold, there is no fixed rule of how much of your portfolio you should allocate to gold, but experts suggest around 10% to 15% overall. However, you should consider market trends, current and historical prices of gold, and your own investor profile to determine how much gold you want to own.

Remember that, much like other physical precious metals, such as silver and platinum, gold is typically a safe investment. Gold has virtually no counterparty risks and no default risk. Nevertheless, you shouldn’t expect huge profits in the short term. On the contrary: gold is a long-term investment that could, potentially, outperform stocks in the long run. It serves, primarily, as a safety net, or monetary insurance against a possible widespread economic crisis and inflation. Like with any other form of investment, you should hold on to it until the right moment to sell.

How much does it cost to invest in gold coins?

The primary factor that will determine the price of a gold coin is the gold spot price. It’s a standard value attributed for a single troy ounce of gold. It’s determined by supply and demand and transactions occurring on a daily basis on mercantile and derivatives markets, such as COMEX or NYMEX.

The gold spot price plays a key role in the fluctuations of gold bullion products. It functions as a base price. Precious metal dealers will add a small percentage above the spot price, called a premium. Premiums ensure that dealers are able to cover business costs and still turn in a profit. The final value is referred to as the "ask price".

Online dealers, such as SD Bullion, are constantly tracking the spot gold price and updating the prices of their gold bullion products, sometimes by the minute. On our website, you can see the live spot price of gold, silver, and platinum on the top of our page, right above our logo.

The following is a list of the most popular gold bullion coins, not only among our customers but on the bullion market worldwide.

The obverse side of this gold coin portrays the original design of the circulating $20 coin, the Double Eagle, discontinued in 1933. It was designed by prominent sculptor Augustus Saint Gaudens. Featuring an awe-inspiring rendition of Lady Liberty as she strides towards the viewer's direction, this design has become an icon of American values and rich history.

Since its introduction, the reverse had featured a beautiful depiction of a family of bald eagles on their nest. In 2021 though, the US Mint released a new, reenvisioned reverse design. From 2021 on, the reverse will show a close-up frame from an eagle's bust, as designed by Renata Gordon.

It is important to point out that American Gold Eagles are produced with 22-karat gold, which means a small quantity of copper is added to the alloy for improved durability. Nevertheless, the US Mint guarantees the amount of pure gold specified on the reverse of the coin. The copper is added on top of the full pure gold content, making the American Gold Eagles actually heavier than other bullion gold coins.

The Royal Canadian Mint was the second institution in the world to release a gold bullion coin not designed for circulation, but rather for investment, in 1979. The Gold Maple Leaf is a treasured bullion coin among investors. It is struck with 24-karat gold and a millesimal fineness of .9999. The RCM once even released a 100-kilo gold coin with a face value of one million Canadian Dollars. It had a limited mintage of only 6 units, and one of them was stolen from Berlin's Bode Museum in 2017.

The obverse side of these coins depicts the latest rendition of Queen Elizabeth II’s side profile, as it is typical among the British Commonwealth (currently, the 79-year-old bust). The reverse side shows a detailed sculpture of the Maple Leaf, one of Canada’s dearest national symbols and namesake of the program.

These extremely collectible coins from the Chinese Mint offer a different reverse design every year since it was introduced in 1982 (except in 2001, when they repeated the design from 2000). The changing designs always portray a rendition of one or more giant pandas in their natural environment.

The obverse is a portrait of the Hall of Prayer for Good Harvests, the main and largest building of the imperial complex named the Temple of Heaven, in central Beijing.

Over the years, the reverse of the Australian Gold Kangaroos has featured different designs from this marsupial in its natural environment, similar to the Chinese Gold Pandas. This strategy attracts investors and collectors worldwide.

The obverse side is the portrait of Queen Elizabeth II, wearing her crown and pearl necklace.

The first bullion coin to enter the market in 1967. It was, for a long time, the most popular gold bullion coin among investors, but international sanctions against the South African apartheid regime during the 80s and 90s banished imports from this coin in many countries, including the U.S., the biggest consumer of this gold coin at the time. To this day, over 50 million units of the Gold Krugerrand have been minted and sold to investors and collectors worldwide.

The name of the coin is a combination of Rand, the country’s currency, and Paul Kruger, South African President during the turn of the 20th century. The reverse shows a representation of a galloping springbok antelope, a national animal of South Africa.

These visually appealing and well-established gold coins are minted with 22-karat gold (.9167 fine) in varying sizes, from 1 troy ounce to 1/20 troy ounce.

Founded in 886 AD, the Royal Mint is the second oldest mint still in operation. Needless to say, it is one of the most established refineries in the world and its products enjoy the utmost regard from investors.

Again, the obverse of these coins portrays the profile of Queen Elizabeth II. The reverse is a representation of Britannia, the personification of Great Britain.

These beautifully designed coins come in various sizes, ranging from 1/20 troy ounce to 1 troy ounce. Nowadays, Gold Libertads are produced with 24-karat gold and millesimal fineness of .999. Although they carry no face value, they are still accepted and guaranteed as a currency by the Mexican government based on the market value for gold.

Here are a few honorable mentions from gold coins, not listed above, all of which also carry great regard with investors and collectors alike:

There are different ways in which you can purchase physical gold. Gold coins have become extremely popular due to their semi-numismatic value and the fact that they are backed by a sovereign government.

However, gold bullion bars can also be a sensible way to invest in gold. Gold bars usually have lower premiums in comparison to gold coins, especially gold ingots with simplistic or hardly any design. A Gold round is, simply put, a gold bar shaped like a coin. It is not legal tender or has any face value. Gold bars and gold rounds are usually produced by private mints.

If you are looking to acquire the purest gold for your dollar invested, then bars and rounds could be a good option. Remember that premiums are based on a percentage above the spot price. The lower the premium, the cheaper the pure gold content. But you should also expect lower premiums yourself when you decide to resell.

On the other hand, gold coins are typically considered to be more liquid. In addition, the fact that they are legal tender can prove of great value in case of a widespread economic collapse. Finally, gold coins could potentially share a market with collectors and enthusiasts of numismatic coins.

Before you make a purchase, establish your goals. Would you prefer to be more liquid or to amass the most amount of gold you could buy? If liquidity is your game, consider gold coins. If owning as much pure gold as possible is what you are looking for, take gold bars or gold rounds into account.

Where to buy gold coins?

You can buy gold coins directly from other investors, or from precious metal dealers. Brick-and-mortar shops are easy to find in big cities, but make sure they are reputable dealers before you decide to purchase from them. Online dealers are usually able to offer better prices than a local coin dealer, as the latter has greater business costs to cover and a smaller portion of the market.

Can I buy Gold Coins from eBay?

It is not difficult to find online deals on eBay or other secondary market websites for gold coins. However, there are many scams being run by dishonest people on those networks and you should be very careful. The safest choice would be to buy online from a reputable gold dealer, such as SD Bullion.

Should I report gold coin purchases to the IRS?

You should only report gold coin purchases to the IRS if you made a cash purchase of $10,000 in gold within 24 hours. Report 8300 needs to be filled out and sent to the IRS. You should also notate the purchase on your tax returns.

How to buy gold coins online?

Buying gold bullion online at SD Bullion is as easy as any other online purchase. You can check what gold, silver, or platinum products we have available in our inventory and select the one you want. On the product page, define how many units of the product you would like to purchase and click on “add to cart”. When you go to checkout, your prices get locked in, so any fluctuations of the spot price will not affect your order. We also offer free shipping on orders above $199.

If you have any further questions, contact our customer support. We are available over the phone at 1(800)294-8732, at the email sales@sdbullion.com or through our live web chat feature on the bottom right of your screen.