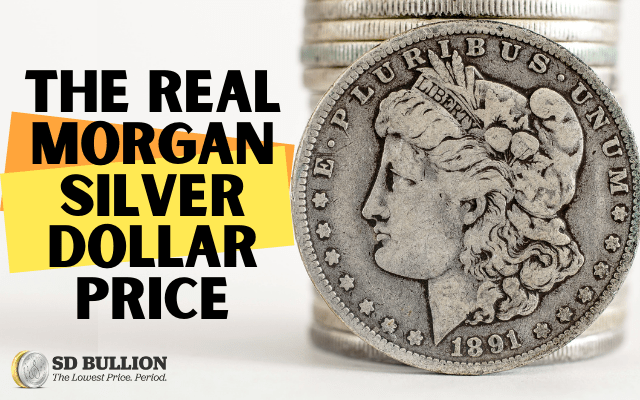 How Much are Morgan Silver Dollars Worth?

Jump To: Brief history | Design | Production and composition | How much is it worth today? | Most valuable Morgan Silver Dollars | Are they a good investment?

It is undeniable that Morgan Silver Dollars continue to entice numismatic enthusiasts and coin collectors across the country and in the world. 2021 marks the 100th anniversary of the transition from the Morgan Silver Dollar to the Peace Silver Dollar. In order to celebrate that fact, Congress authorized an act ordering the production of both these beloved coins and pieces of American history for the purpose of coin collection.

In this article, we will talk about how this silver dollar coin came to be, its design, mintage, and composition. Moreover, we will elucidate what is the Silver Morgan Dollar value today, from what year is the rarest Morgan Silver Dollar, and discuss if these valuable coins are a good investment.

In 1873, prices of silver in the US were plummeting due to a surplus of silver bullion supply. In response, the Federal Government passed the Fourth Coinage Act. The law decoupled the US dollar from the silver standard. The end of the bimetallic monetary system in the United States, along with a rampant amount of speculative investments, caused great inflation and brought the country to a great depression. Historians refer to that period as the Panic of 1873.

In an effort to control the economic crisis, Congress passed another law, in 1876, reauthorizing the free coinage of silver. The United States Mint quickly started studying new designs for the half dollars and dollar coins. George T. Morgan was, then, hired as an Assistant Engraver, recommended by the Deputy Master of the Royal Mint in London.

Morgan was actually working on the designs for the half-dollar coin at the time, but his work was so inspiring that US Mint Director, Henry Linderman, opted to use them on the Silver Dollar coin instead.

Morgan’s design of Lady Liberty sought to represent Her as an American woman, rather than having Greek features. The story goes that he used a philosophic writer and teacher Anna Willess Williams as his model.

The final design on the obverse depicted Lady Liberty in profile. 13 stars surround the bust, to represent the original colonies. On the top is the motto “E PLURIBUS UNUM”. The mint year is at the bottom, below the neckline.

The reverse is an image of a bald eagle with its wings wide open. It is grasping olive branches and arrows on its talons. These are to represent America’s readiness for war, but with a desire for peace. Above the eagle’s head is the inscription “IN GOD WE TRUST”. On the outer rim are the words “UNITED STATES OF AMERICA” and “ONE DOLLAR”. These last two inscriptions are separated by two six-pointed stars.

Production of the Morgan Dollars began in 1878 in the Philadelphia Mint, but in the same year, the dies arrived at the western mints of San Francisco and Carson City. The New Orleans Mint would only begin striking the Morgan Silver Dollar the following year.

The precious metal alloy used on the Morgan Dollars contained 90% silver and 10% copper. The US Mint is using the same composition for the 2021 revitalized coin.

How much is a Morgan Silver Dollar worth today?

Are you interested in collecting Morgan Silver Dollars? Or have you stumbled upon a few of these and are now wondering how much you can get by selling them? Either way, in this section we will discuss the average Morgan Silver Dollar values and mention a few key circumstances in which these coins can be worth an astonishing amount.

Much like with any other coin, Morgan Silver Dollars derive their value from their condition, rarity, numismatic appeal, and precious metal content. Overall, these coins are not particularly numismatic. Regular issues can even be referred to as “junk silver”. The term is not a direct reference to the coin’s state, but more on the fact that, in terms of numismatics, it is not a particularly rare coin. It derives its value mostly from its silver bullion content and as an investment vehicle, based on the current silver spot price.

The silver spot price is a base market value for 1 troy ounce of pure silver. It plays a key role in determining the prices silver dealers ask for their silver products, and how much they are willing to pay to buy them from investors.

As we have mentioned before, Morgan Dollars contain 90% silver. In other words, 0.7734 troy ounces of pure silver. The value of a regular specimen of these coins comes straight from its bullion content. Thus, you can just multiply 0.7734 by the current spot price of silver to get its melt value. Conversely, you can download our junk silver melt value calculator. Put in the current spot price of silver and the number of coins you own to get the melt value.

Most issues from the Morgan Silver Dollars can be considered junk silver. It means they do not carry an overwhelming amount of numismatic appeal. Nonetheless, there are some specimens from a few mint years or mint branches that can bring a sparkle to a collector’s eyes. Especially if they are in good condition.

The following is a list of the top 10 most valued Morgan Dollars. The list is done based on coin collecting guides and previous auctions from these coins.

The Morgan Silver Dollar is a highly coveted and popular silver dollar. It contains a good amount of silver and enough numismatic appeal to share a market with collectors who are trying to complete their sets. Graded coins can sell at prices way above the silver spot price.

Even regular issues, with wear traces, can turn out to be a sensible investment. Investing in any form of silver is a long-term investment. It is a marathon, not a sprint. You shouldn’t expect to turn great profits in the short run.

Experts suggest allocating 10% to 15% of your investment portfolio to tangible assets, such as precious metals. Silver has a high demand from the industry due to its various uses in technology as a thermal and electrical conductor. It is also highly sought-after in the jewelry industry, medicine, and dentistry. It is a relatively soft metal and very malleable, so it is easy to manipulate.

Finally, many survivalists invest in Silver Dollars and other forms of junk silver. In the end, these coins enjoy a legal tender status and have a face value. Even in the unlikely event of a widespread economic turmoil in which the silver spot price sinks, these coins will never be worth less than their face value.

SD bullion offers a range of graded and ungraded Morgan Silver Dollars that will sate the enthusiasm of both investors and collectors alike. Make sure to check the coins we have available in our inventory, or search for other silver bullion products if silver is your game.

If you need any assistance, our team is ready to assist you at our live web chat feature, at sales@sdbullion.com, or on the phone at 1(800)294-8732. We also encourage you to follow us on our social media outlets to be up to date with the products we are currently offering.