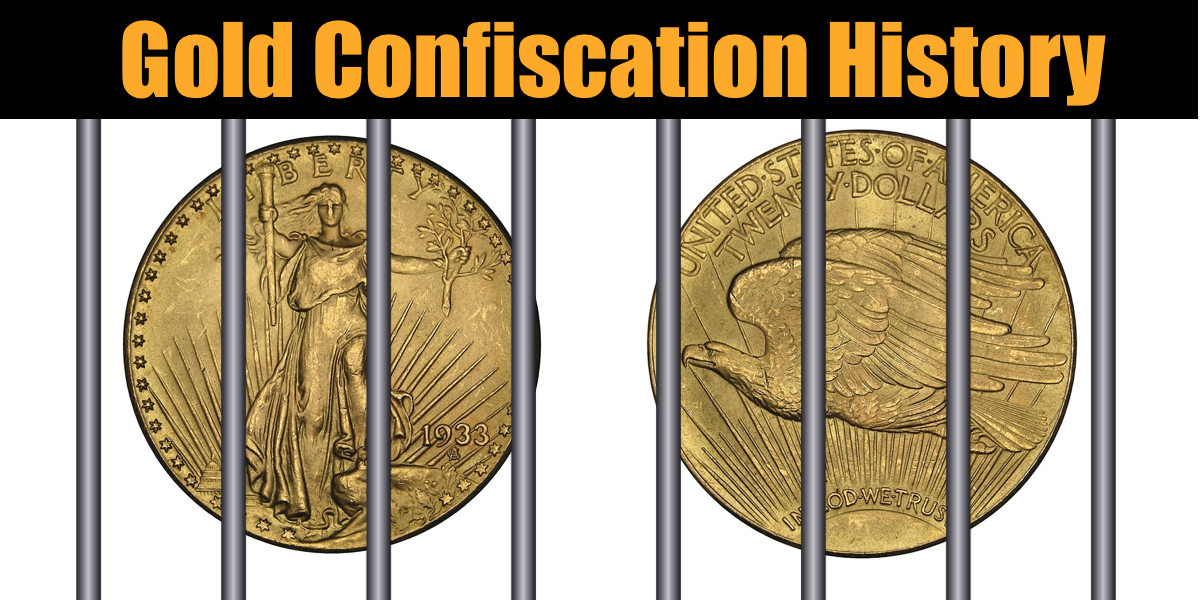 With negative interest rates (NIRP) and cashless policies increasing around the world. There remains a consistent concern that under financial duress, governments might move to confiscate or nationalize citizens' private gold and or silver supplies.

Both official and unofficial gold robberies occurred last century — both by waring imperial governments or under coercive legal cover.

Most modern gold confiscations happened beginning in the 1930s Great Depression, onwards through the end of World War 2, and even into the middle 1970s even.

Here we will count down some 19th and 20th Century government gold confiscations and even a silver confiscation that happened right here in the USA.

A fascinating era
in #GoldPrice history.

Back in 1860, the United States banks ran out of gold and silver specie coins to lend to the government during the Civil War efforts. Further complicating matters was their war advisory, the southern Confederate states issued their Confederate dollar (which later hyper-inflated to worthlessness, or perhaps a little numismatic collectible note today).

Rather than pay usurious high-interest rate loans that foreign banks were charging at the time (e.g., 1860 AD), the United States’ Union government-issued "fiat currency" to finance their Civil War efforts.

These soon to be nicknamed fiat currency greenbacks were legal tender by law in the Union but not backed by gold or silver, only the credibility of the then U.S. government. Their introduction to the money supply guaranteed Gresham's Law took place as circulating gold and silver coins began to disappear.

None of this fiat currency issuance policy was without criticism. It was indeed the first time the then restricted the democratic republic of the United States had officially issued a full fiat currency legal tender note.

Gold rich states like California flexed their legal states' rights over the then Federal government decrees, effectively avoiding greenbacks usage in business outside of a few exceptions in person to person bilateral agreements and trades.

There was even a major scandal on Wall Street involving a sordid story of speculative financial conspirators, a then US President, and other historic names all perhaps conspiring to drive the then price of gold to $160 oz by late 1869 AD.

A historic gold mania and gold price accounting followed only a few years after the US Civil War. 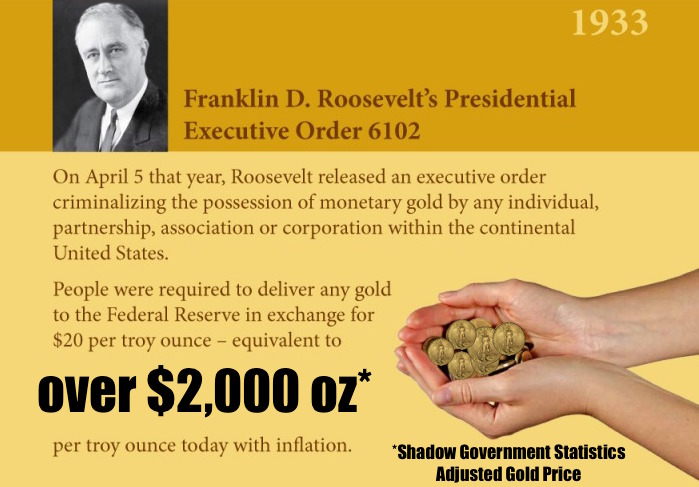 To supposedly combat the Great Depression. In 1933 and 1934 the US gold nationalization of US citizen’s privately held gold coins was undertaken.

Under Executive Order 6102, and the threat of a $10,000 fine and or imprisonment, US citizens got coerced into turning in their gold coins to local Federal Reserve bank branches. Gold coin melt data from the middle 1930s shows the vast majority of the citizenry ignored the order, yet about a third population followed the proclamation.

In replacement of the privately saved gold coins being turned in, US citizens got $20.67 per ounce redemption payments in paper currency in 1933. US citizens were allowed to keep up to $100 in gold coins which basically meant about 5 ounces of gold could be saved per citizen.

By 1934, then US President Franklin Delano Roosevelt devalued those same paper US dollars to gold by nearly -70%, arbitrary going from the more than century long-standing price of $20.67 to $35.00 oz USD with the flick of a pen (lone exceptions being after wars and subsequent price inflations which followed). The Gold Reserve Act of 1934 set up the Exchange Stabilization Fund which has been arguably used as a legal pretext to manipulate any financial market anywhere at the behest of the modern American empire since.

Effectively the 1933 Executive Order 6102 got made to bolster the then US Official Gold supply while also devaluing the legal tender currency supply, and thus supposedly easing or inflating the economy out of the debt quagmire it was suffering.

The trouble was not merely double-crossing your citizenry's savings via sudden devaluation, but also the arbitrary number of $35 oz gold was too low a number to clear the currency already in circulation (thus the velocity of money did not pick up as fast as FDR wanted it to).

The US would pay dearly for that in slower recovery and with losing over half its gold reserves moving into the 1971 Nixon Shock to come. Much of the over 10,000 tonnes of private US gold nationalized in 1933-34 was quickly pilfered out of US gold vaults in the decades to follow.

In yet another governmental conspiracy to suppress the price of gold by keeping the US dollar gold price set at $35 oz following World War II and moving into the Vietnam Ware era (e.g., this ultimately led to the failed London Gold Pool price-rigging market-maker conspiracy).

Even contestants on the popular game show Jeopardy do not know many of these facts. 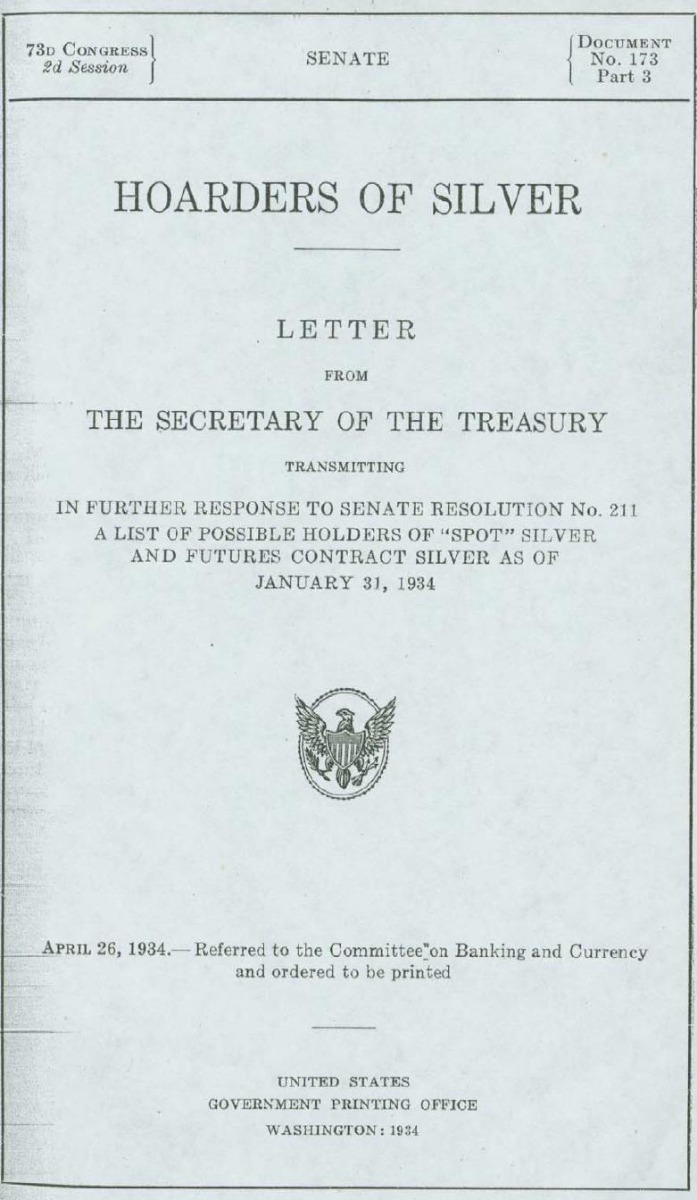 All other private silver bullion bar holdings were mandated to be turned into US Mint locations and purchased by the US government at 50¢ oz.

Domestically mined silver got then purchased at a premium of 64.5¢ oz as a political handout to struggling western silver miners at the time.

Executive Order 6814 had a 90 day mandated deadline. Within those three months, some 109 million ounces of silver got delivered to the US Treasury. Another 4 million ounces trickled in before the order got rescinded in 1938. 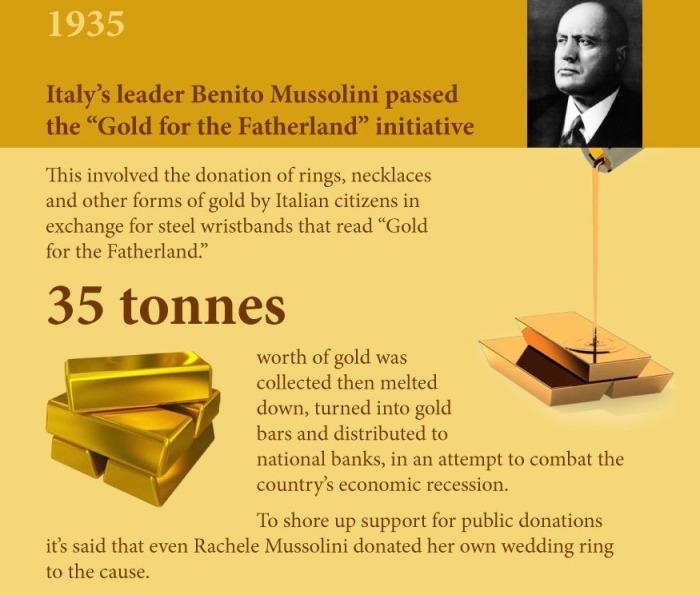 In 1935, Italy’s then-leader, Benito Mussolini passed the “Gold for the Fatherland” initiative.

This involved the donations of gold rings, gold necklaces, and other forms of gold pieces by the Italian citizenry in exchange for steel wristbands that read, “Gold for the Fatherland.”

A total of 35 tonnes of gold was collected (how many ounces are in a tonne of gold?) and distributed to national banks in Italy. All this was under the supposed effort to combat the Great Depression. 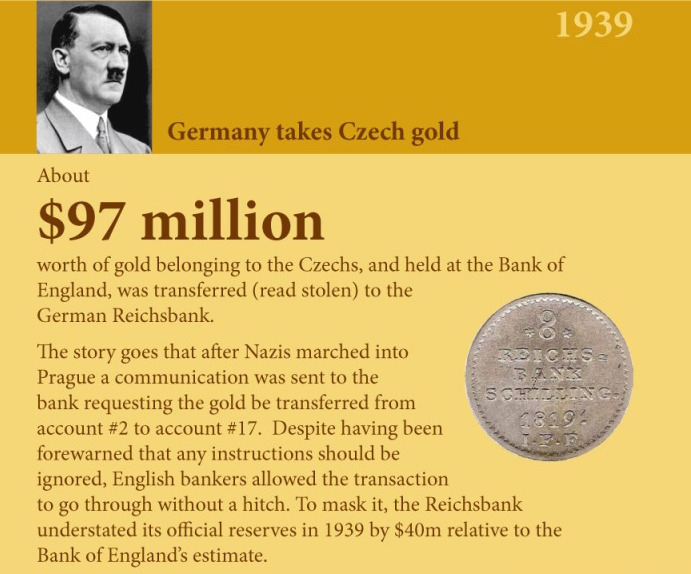 Nazi gold fleecing during World War II is conservatively estimated to have been just over 1,000 tons in size.

Most of this stolen gold was done in a disorderly manner, ushered off to Swiss banks to help finance the then German war machine.

Most European nations that stood in the path of imperial Germany during World War II, countries like France and Britain, they nationalized their citizens gold and ushered it off to safer harbors. 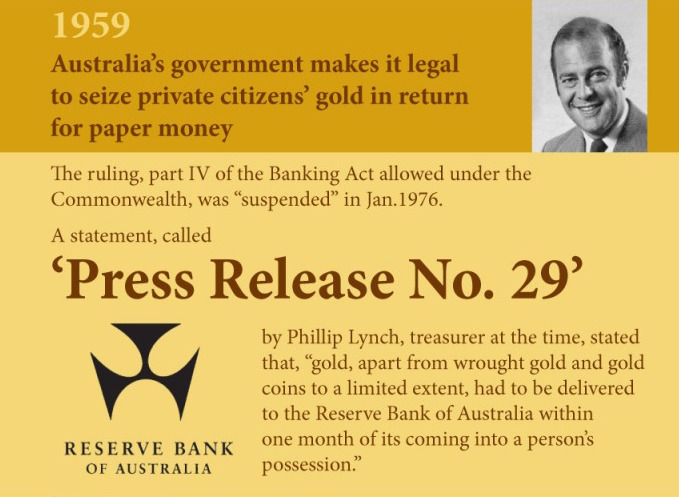 In 1959, the Australian government made it legal to take private citizens’ gold in return for paper money payment.

The ruling, part IV of the Banking Act allowed under the Commonwealth, was suspended by January 1976. A few years before a mania for the prices of gold in 1980. 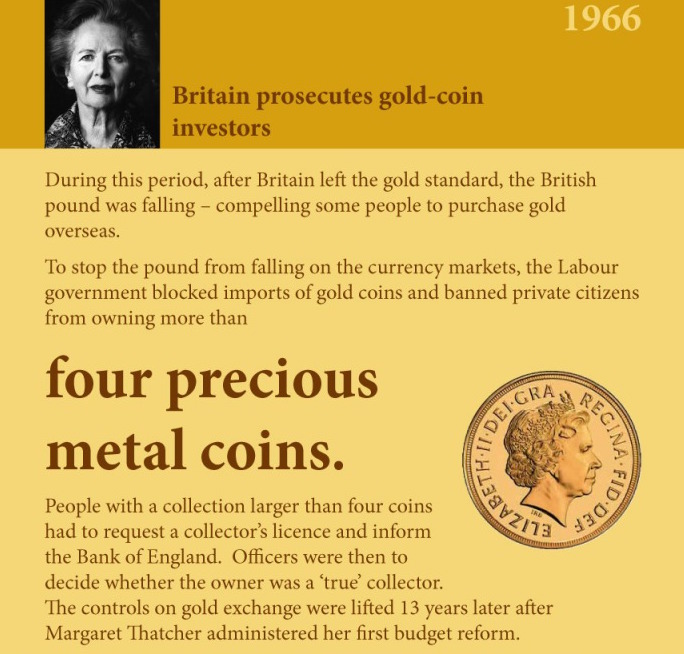 Originally the British pound sterling was defined at 12 troy ounces of silver.

It now costs over 14 fiat British pounds to buy 1 troy ounce of silver. An over 99.5% devaluation of their currency under the world's oldest central bank rule, the Bank of England.

Indeed how the once-mighty British empire has fallen.

If another gold confiscation happens in the future.

There aren’t a lot of viable solutions. If ours, or your government, gets to the point where it declares it illegal to own a meaningful amount of silver or gold bullion, you’d have little choice but to comply.

Either that or do like many of our forefathers did here in the USA, and partially ignore the edict regardless of the threat of financial penalties, confiscation of your metal with no recuperation, and even 10 year prison sentences awaiting your non-compliance.

While many bullion investors think silver or gold will never again be confiscated in the future simply because right now, gold is not officially part of the monetary system. No one knows what the future holds.

Although we are not currently on a gold standard today, if a future financial crisis got terrible enough, historic precedent leads one to believe if it happened once, it can therefore happen again.

Current record debt loads in all developed emerging countries collectively are unpayable when collective unfunded liabilities and promises get considered.

We are not suggesting a gold confiscation or a silver confiscation is coming or a future foregone conclusion or even probable for that matter. Here we are merely highlighting how it did happen in the past.

If the likes of Ken Rogoff have their NIRP and cashless dream future, virtually nothing is out of the realm of possibilities.