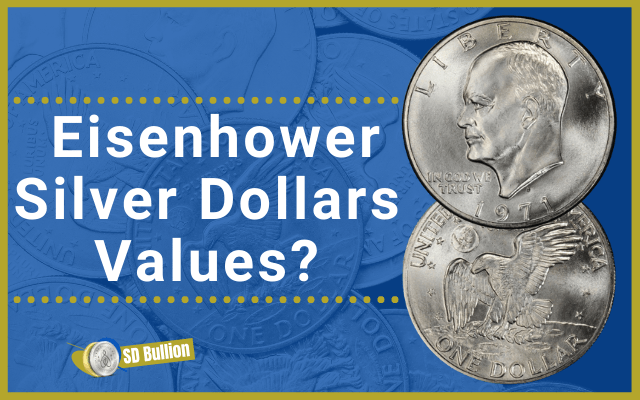 The year 1969 is, beyond a shadow of a doubt, an important year in United States’ history. The month of March marked the passing of President and WW2 General Dwight D. Eisenhower. In July, scientific research and development culminated with the man’s first landing on the Moon. And after the U.S Mint announced the production of a new dollar coin, Congress saw the opportunity to honor both events in the piece’s designs.

Minted from 1971 to 1978, the Eisenhower dollar coin is an alluring piece of U.S coinage. They are the U.S’ last circulating large-size dollar coin and were minted in both copper-nickel clad and 40% silver composition. No dollar coin had been produced since 1935, the last year of the Peace dollars. Nevertheless, Eisenhower dollars had a short run and a small number of varieties.

In that regard, they are a favorite choice to kickstart a collection, while, at the same time, being a possible way to earn some money. “Ike" dollars made of silver (as they are called given the late President’s moniker), together with their condition and rarity, can be worth well over their face value.

In this article, we will show you all Eisenhower silver dollars worth money. There is also a price chart with their estimated auction prices according to professional coin grading services, such as PCGS and NGC. Don’t be afraid to look into your change or check in with your coin dealer for these coins. They could be an opportunity to earn some money in an enjoyable manner.

The United States Mint introduced the Eisenhower dollar coin in 1971, after over thirty years of not minting dollar coins. With the exception of western states, the popularity of the silver dollar was low, not having much circulation. For this reason, this coin had no demand and production issues ever since 1935, when the Peace dollar series was last minted.

Up until the 1960s, the bullion value of a silver dollar did not exceed 70 cents. However, this decade saw a rise in the price of silver. For this reason, many started to hoard the coin due to its precious metal content. This caused a shortage in the Western states they circulated the most. In view of that, Congress wanted new coins to be minted. At the time, Mint Director Mary Brooks wanted to revitalize the dollar coin with a new design.

The events surrounding the discussions in Congress about the new dollar coin took place around the same time as the passing of President Eisenhower, as well as the Apollo 11 mission landing on the Moon’s surface. As a consequence, Congress saw the opportunity to honor both in the coin’s design.

The first Eisenhower dollars struck after over thirty years of no dollar coins produced brought changes with their inception. With silver prices on the rise, coins struck by the United States Mint would start to have a copper-nickel clad composition.

Business strikes of the Eisenhower dollar were produced in both the Philadelphia Mint and Denver Mint in copper-nickel clad composition.

Nonetheless, the new decision didn't cease the use of silver in U.S coins altogether. The San Francisco Mint was responsible for producing silver varieties of the clad dollars in both uncirculated and proof finishes for coin collectors.

The pieces with silver content sold well, but the overall opinion on the Eisenhower dollars was unpopular. The copper-nickel coins did not circulate well, and got limited to casinos and eventually collectors.

The design of the Eisenhower dollar coin was envisioned by Mint Chief Engraver Frank Gasparro. He created both the obverse and reverse of the dollar coin.

Yet, in 1973, production started for a new set of coins celebrating America’s bicentenary. For that occasion, the 1976 Eisenhower dollar received a new design chosen by the Treasury Secretary from a national competition honoring the country’s ideals of freedom and free thought with a depiction of the Liberty Bell. 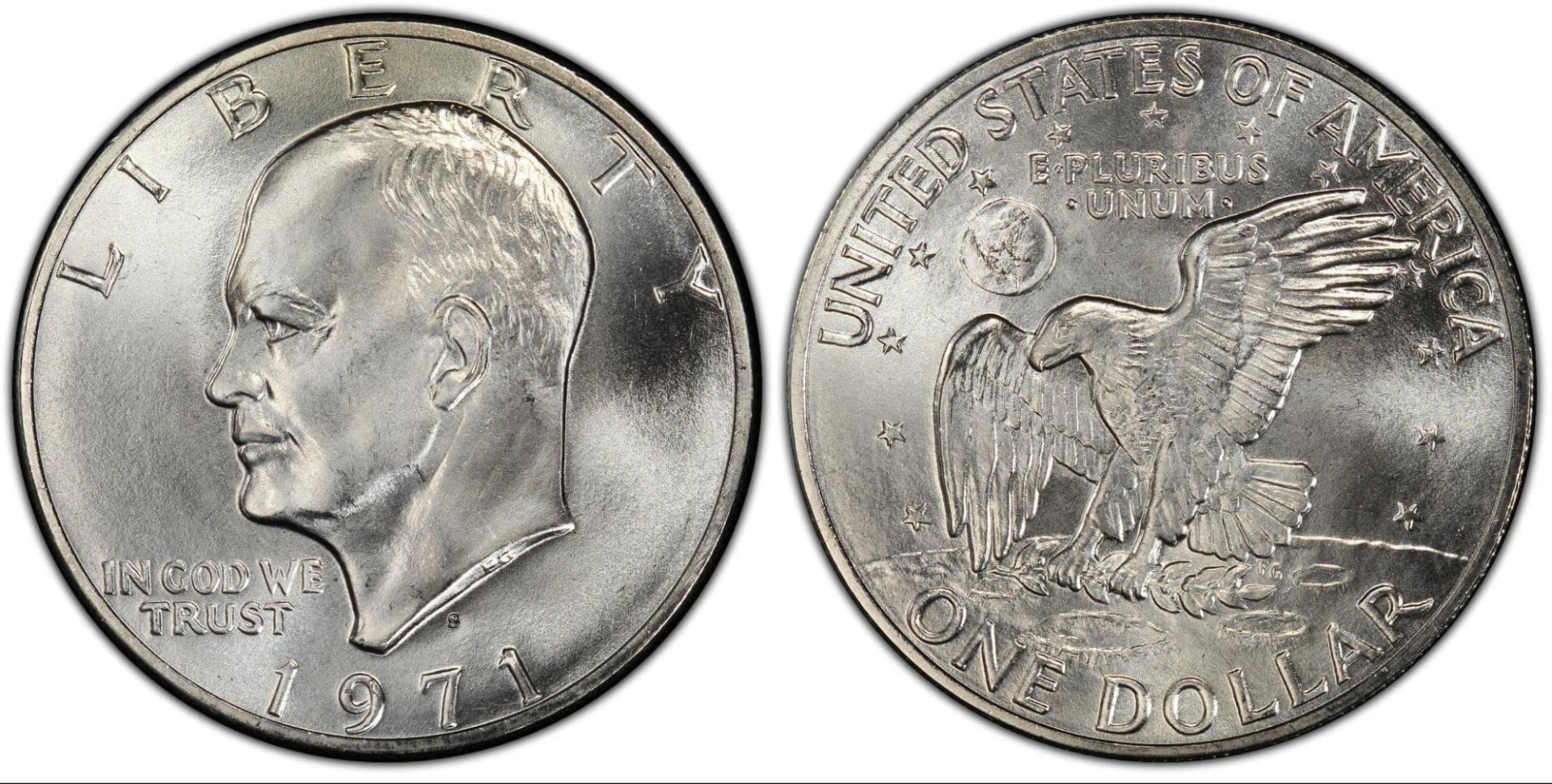 Obverse and Reverse of the Eisenhower dollar coin. Source

The obverse of the Eisenhower dollar coin features Gasparro’s portrait of President Dwight Eisenhower. Arching along the coin’s upper half is the word “LIBERTY” in spread-out letters. Under his chin is the national motto “IN GOD WE TRUST”. The mint year is featured beneath the president’s profile.

Eisenhower dollars minted in the Denver and San Francisco facilities bear a “D” and “S” mint mark, respectively. They are located slightly below the neck. Philadelphia mint coins bear no mint mark.

The Ike dollar’s reverse was based on the Apollo 11 mission insignia, designed by astronaut Michael Collins. It portrays a bald eagle, America’s national bird, hovering near the Moon’s surface, grasping an olive branch in its talons. Thirteen stars, representing the original states, can be seen surrounding the eagle. In addition, a distant Earth is visible above the animal’s head.

To the planet’s right, the national motto “E PLURIBUS UNUM” is inscribed. Arching around the reverse’s upper and lower half, respectively, are the words “UNITED STATES OF AMERICA”, and “ONE DOLLAR”. 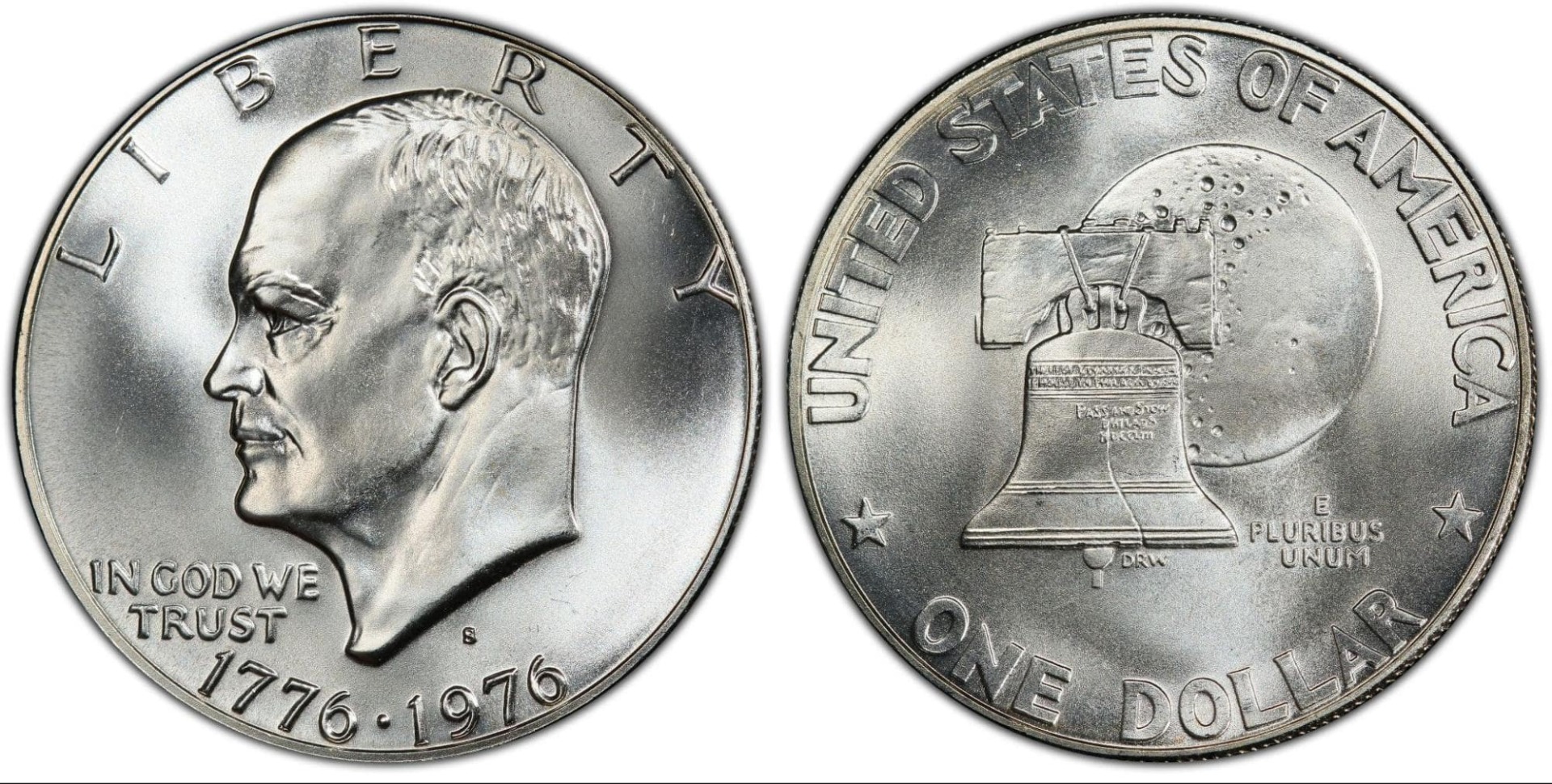 Obverse and Reverse of a Bicentennial dollar coin. Source

The United States Mint celebrated America’s bicentennial in 1976 with a series of commemorative coins. The quarter, half-dollar, and dollar coins all received a temporary redesign.

The reverse of the 1976 Eisenhower dollar coin was designed by art student Dennis R. Williams, who was 21 at the time. It displays the Liberty Bell superimposed on the moon, which takes up most of the reverse. To the bell’s right, the national motto reads “E PLURIBUS UNUM”.

Numismatics often ask themselves: how much is an Eisenhower bicentennial dollar worth? The 1976 Eisenhower dollar series remains to this day a favorite among coin collectors. Bicentennial dollars, in both 40% silver and copper-nickel clad, are highly marketable, be it for enthusiasts or coin dealers.

In any case, due to factors like rarity, Eisenhower dollar values are directly tied to their mintage number.

The production of Eisenhower dollars made of silver occurred in the San Francisco Mint. The branch was responsible for producing uncirculated and proof strikes of the dollar coin for collectors, as a way to avoid hoarding. These Eisenhower dollars contain a 60% copper and 40% silver content distribution.

There are no dollar coins dated 1975, given America's 1976 bicentennial. The production of the bicentennial silver dollar began almost two years prior to its inception, as mint officials deemed there would be little time to prepare the commemorative coins in under a year.

At any rate, these were the mintage figures for each year:

The US Mint sold the San Francisco Mint’s pieces at a premium in special mint sets until 1974. They are often referred to by collectors as blue ikes and brown ikes. 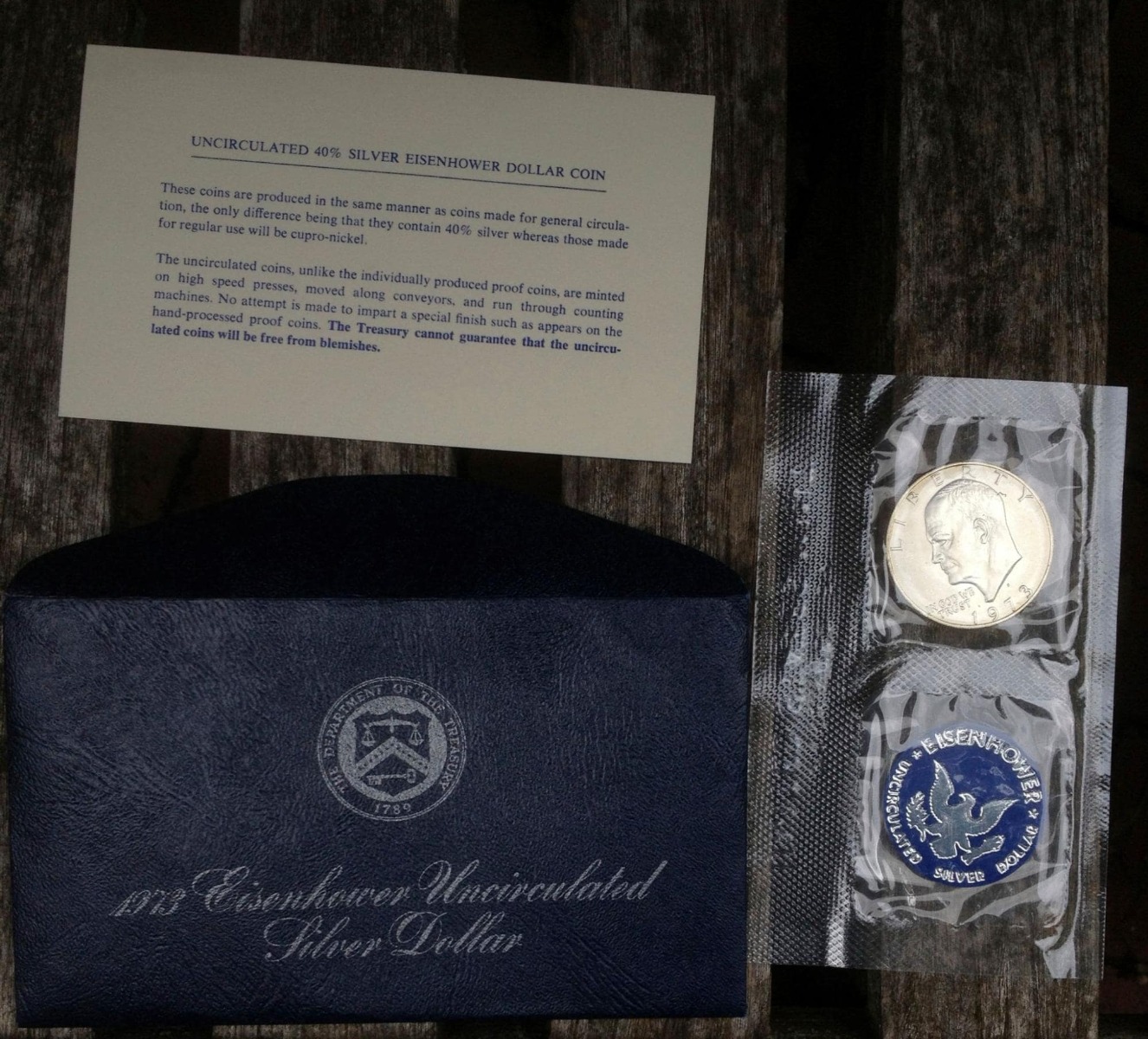 Eisenhower silver dollars struck in uncirculated condition were sold by the United States Mint in blue envelopes. For this reason, these coins are generally referred to as the blue Ike dollar. They bear an “S” mintmark and were accompanied in their box set by a blue and silver token adorned with the U.S Mint logo.

The blue Ike mint sets had an original sale price of $3.

Proof sets versions of the 40% silver Eisenhower dollar were sold in brown faux wood grain boxes. These boxes carried a golden seal on their outside and housed the proof silver coin in a plastic case on their inside. The brown Ike dollar, as it is known, also bears an “S” mintmark.

The brown Ike proof sets had an original sale price of $10.

In view of this, let’s take a look at how much the silver Eisenhower dollars are worth. All values are shown in a USD price chart, for swift reading and consultation.

The prices and auction values displayed below are from the last 10 years, from 2012 up until 2022. They are provided by professional coin grading services such as PCGS and NGC.

Eisenhower dollars produced in 1972 by the Philadelphia Mint bring about an interesting variation. There are three varieties produced that year using the cupro-nickel alloy as the US Mint tested dies for long-term production. These pieces are specified as types I to III, and their variations are visible on the coin’s reverse side.

The 1972 Eisenhower dollar features Gasparro’s portrayal of the Apollo 11 insignia. The three types regard differences in planet Earth’s depiction.

Should you want to read more about the three varieties of the 1972 Eisenhower Dollar, you can check them out in our in-depth article.

Due to their short run and availability, Eisenhower silver dollars have an appeal to coin collectors. This variety can be a great way to start a coin collection, given that most dates can be found for sale or in auctions at a decent starting price.

On top of that, Ike dollars are the last of the large dollar coins minted for circulation by the U.S Mint and mark the inception of the copper-nickel clad in U.S coinage. This can grant them great numismatic value, by being different from all U.S coins in circulation before them.

Besides, their rich historical background can tie both President and General Eisenhower to the revolutionary Apollo 11 mission that landed on the moon. Not to mention that, along with the quarter and Kennedy half-dollar, the 1976 Eisenhower dollar is part of the bicentennial coins that were released for the 200th anniversary of the signing of the declaration.

Collectors that turn to Eisenhower dollars often do so with the interest of completing a 32-coin set. Such a set includes all varieties that were minted, from regular issues to proof coins, in both copper-nickel clad and silver composition.

Nevertheless, a complete set of silver Ike dollars comprises 10 coins, regular issues, and proofs included. Therefore, they can be an attractive option for collectors.

The Eisenhower dollar is an engaging piece of U.S coinage. Even though they failed to circulate over the years, Ike dollars bring about a rich history. Meanwhile, some varieties can be worth well over their face value, as shown in our price chart.

Be it if you’re looking to make some money over a well-conditioned coin, be it if you want to start a collection. We hope our article was helpful in this matter.

Are Eisenhower Silver Dollars Worth Anything?

Eisenhower dollars made using the copper-nickel clad can be found with relative ease, and are worth a bit over their face value.

However, Eisenhower dollars made of 40% silver are worth a lot more than their face and melt value. Regular issues and proof coins in good conditions can reach hundreds and even thousands of dollars in auctions.

The bicentennial dollars, half-dollar, and quarter 40% silver coins were struck at the San Francisco Mint, in both uncirculated and proof versions for collectors. The 1976 silver coin bears an “S” mintmark, below the profile of President Eisenhower.

There is only 1 known example of a 1976 bicentennial dollar struck without mint marks. It is considered one of the rarest coins.

What Eisenhower Silver Dollars Are Worth Money?

Ike dollars in silver are worth more than their face value. These coins contain a 40% silver composition and given factors such as their condition, scarcity, and their melt value, they can be worth a lot more.

A 1971 silver dollar value ranges from $11 up to $6900, as recorded in auctions. Other similar varieties may be within this price range.

What Is The Rarest Eisenhower Dollar?

A silver 1976 bicentennial dollar that was struck without the “S” mintmark is considered one of the rarest modern coins. The bicentennial coins were first struck as strike trials in proof, with only one example of each coin.

This 1776 to 1976 silver dollar value is yet to be determined. They are the only existing example left.

Murilo (Mo) Menezes is an attorney and tenured English professor. His passion for economics and coinage led him to the gold and silver industry where he writes in-depth articles about collectible coins; as well as coin news and investing articles.