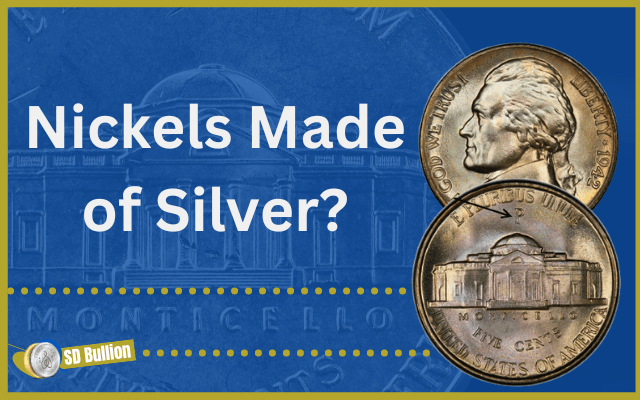 What Nickels are Silver?

When President George Washington spoke to the House of Representatives in 1792, he reinforced the country's need for small coinage in circulation and commended the creation of a national mint. Among the first silver coins officially struck in the country were the half dimes, the first coin with a face value of five cents a piece in US dollars.

In the 1860s, due to the inflation of silver prices, lobbying for the use of nickel in coinage grew strong, and the half dimes were replaced by the nickel, a new 5-cent coin made with a copper-nickel alloy, and the use of silver was discontinued for that denomination, and it wouldn't be for almost another century for its return under a very specific circumstance.

In 1940, the United States started providing military supplies and indirectly assisting the Allies in their efforts against the Axis powers, but it was only in January of 1942 that American troops officially joined the battle in World War II. With the war raging, demand for nickel increased for producing tank armor plates, anti-aircraft guns and ordnance, and for crafting portable bridges.

To be able to meet the increased demand for nickel due to the war effort, Congress authorized the United States Mint to produce nickels with a composition of copper and up to 50% silver. The alloy could be altered for practical reasons, the main one being the concern that the new coins didn't get rejected by vending machines. The US Mint settled with an alloy of 56% copper, 35% silver, and 9% manganese, which ensured the nickels wouldn't be rejected by coin-operated devices. 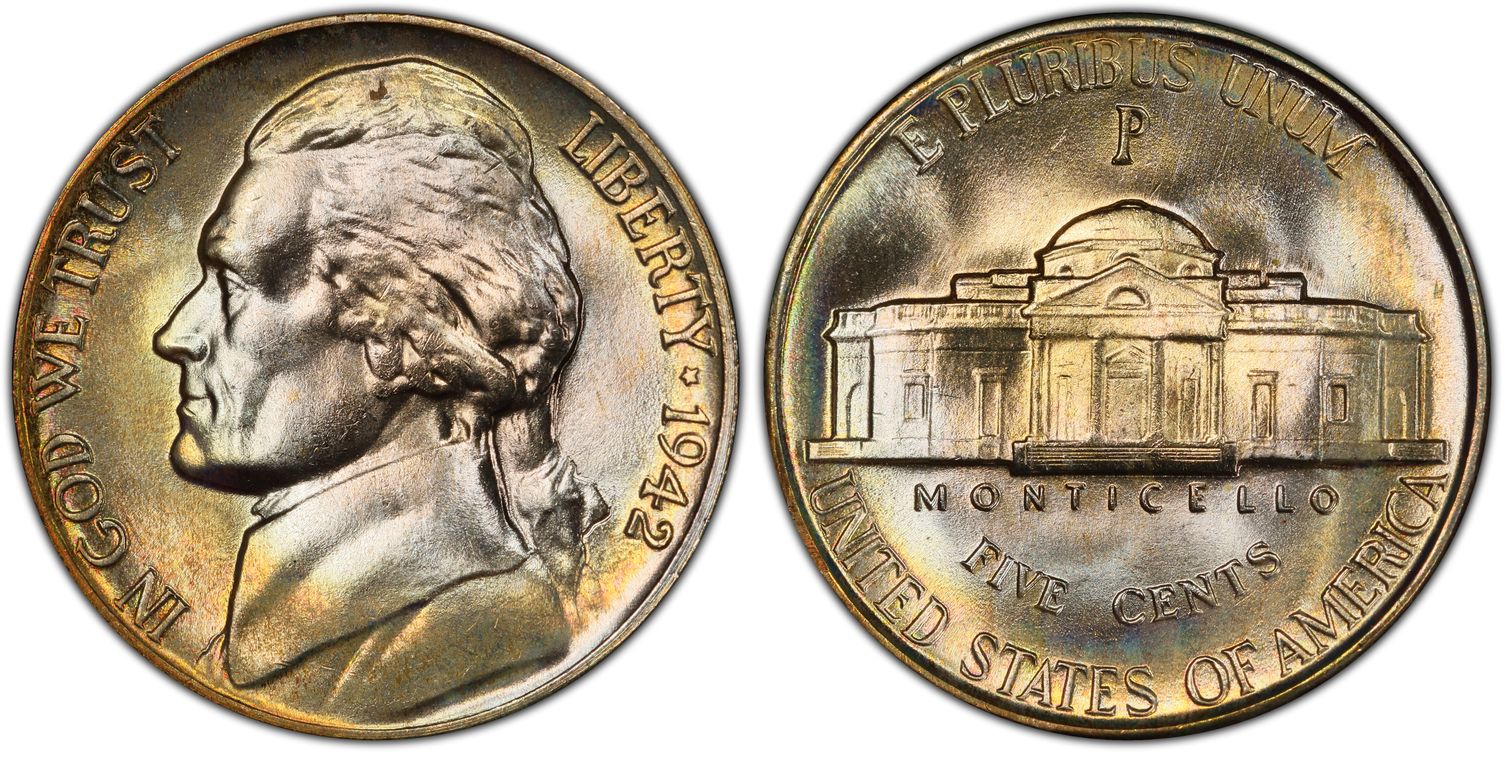 In 1938, the Jefferson design replaced the Buffalo Nickel design on the five-cent coin that had been in mintage for 25 years, which wasn't very popular then. So the US Mint quickly changed it once they were allowed to do so.

In anticipation of Thomas Jefferson's bicentennial, the Mint held a competition to decide on a design that could honor the Founding Father and 3rd President of the United States.

The winner was Felix Schlag, a German-born American sculptor. His design was based on the bust of President Thomas Jefferson sculpted by Jean-Antoine Houdon, present at Boston's Museum of Fine Arts.

The bust on the obverse is facing left (in the viewer's perspective), with the motto “In God We Trust” engraved on the outer circle on the left and the word “Liberty” with the mint year on the right.

The reverse is a portrait of Monticello, Jefferson's home that he supposedly designed himself. The motto “E Pluribus Unum” is inscribed above the building, with the denomination “Five Cents” below and the country's name, United States of America.

Specifically, in the silver nickels, the mintmark (either P, D, or S) is placed on the reverse, above Monticello.

An interesting fact is that Felix Schlag, the designer, forgot to include his initials on the design. They would only be permanently added to the design in 1966.

The Schlag design for the Jefferson Nickel was discontinued in 2004.

How long was silver used in nickels?

The 5-cent pieces with 35% silver in their composition would be minted for four years, from 1942 to 1945. The alloy also contained 56% copper and 9% manganese. With the end of the war, demand for nickel decreased to normality, and the US Mint returned to the copper-nickel alloy (75% copper and 25% nickel) in 1946.

Because of their limited mintage and their story related to World War II, these silver nickels are sometimes referred to as the “War Nickel.”

It is important to note, however, that the US Mint released both a regular Nickel and a silver alloyed one in 1942. The one with the 35% silver content is known as the 1942 Type 2 Nickel.

How much is a silver nickel worth?

In terms of melt value, the silver content within the silver War Nickel is worth around $1.50. Nonetheless, its true value comes from its numismatic appeal, in other words, how much the coin would be worth to coin collectors or coin dealers. And one of the key factors for numismatic value is the coin’s condition.

Most silver nickels in mint condition can be worth thousands of dollars. For instance, an MS68 "Full Step" 1945-D Nickel sold at a private auction in 2021 for $25,000! "Full step" is a designation for Jefferson Nickels where all 5 steps of Monticello on the reverse are perfectly visible. 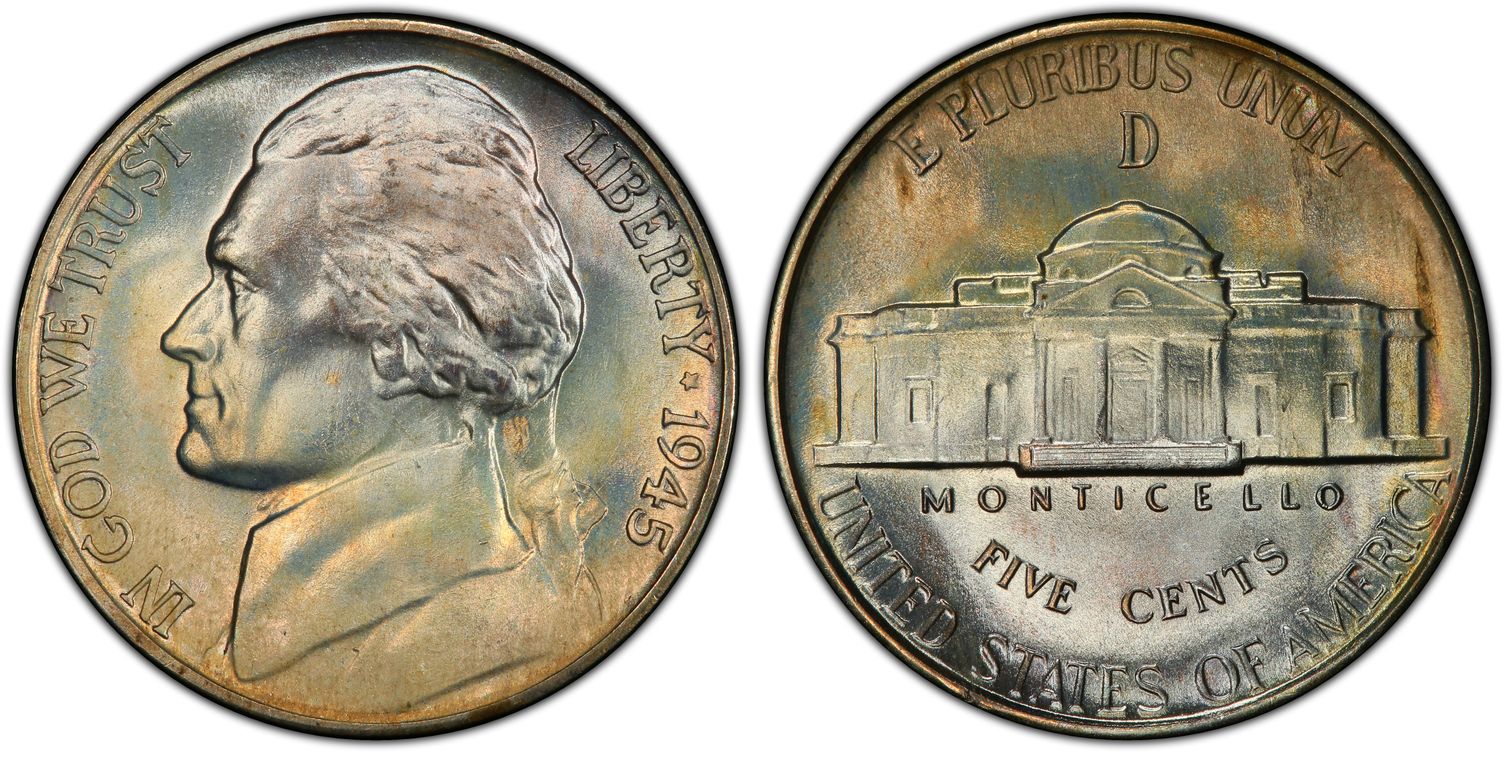 How to identify silver nickels?

The most basic way to identify if a nickel is made of silver is to look at the mint year. Only the copper-silver-manganese composition was used from 1942 to 1945.

However, it's also possible to identify them by looking at the mintmark. Only the silver nickels carried the mint mark on the reverse, on top of Monticello. The change was made to make these coins easily identifiable because the initial idea was to remove them from circulation once the copper-nickel alloy could be used again. This removal never happened, though, as the silver nickels continued circulating. 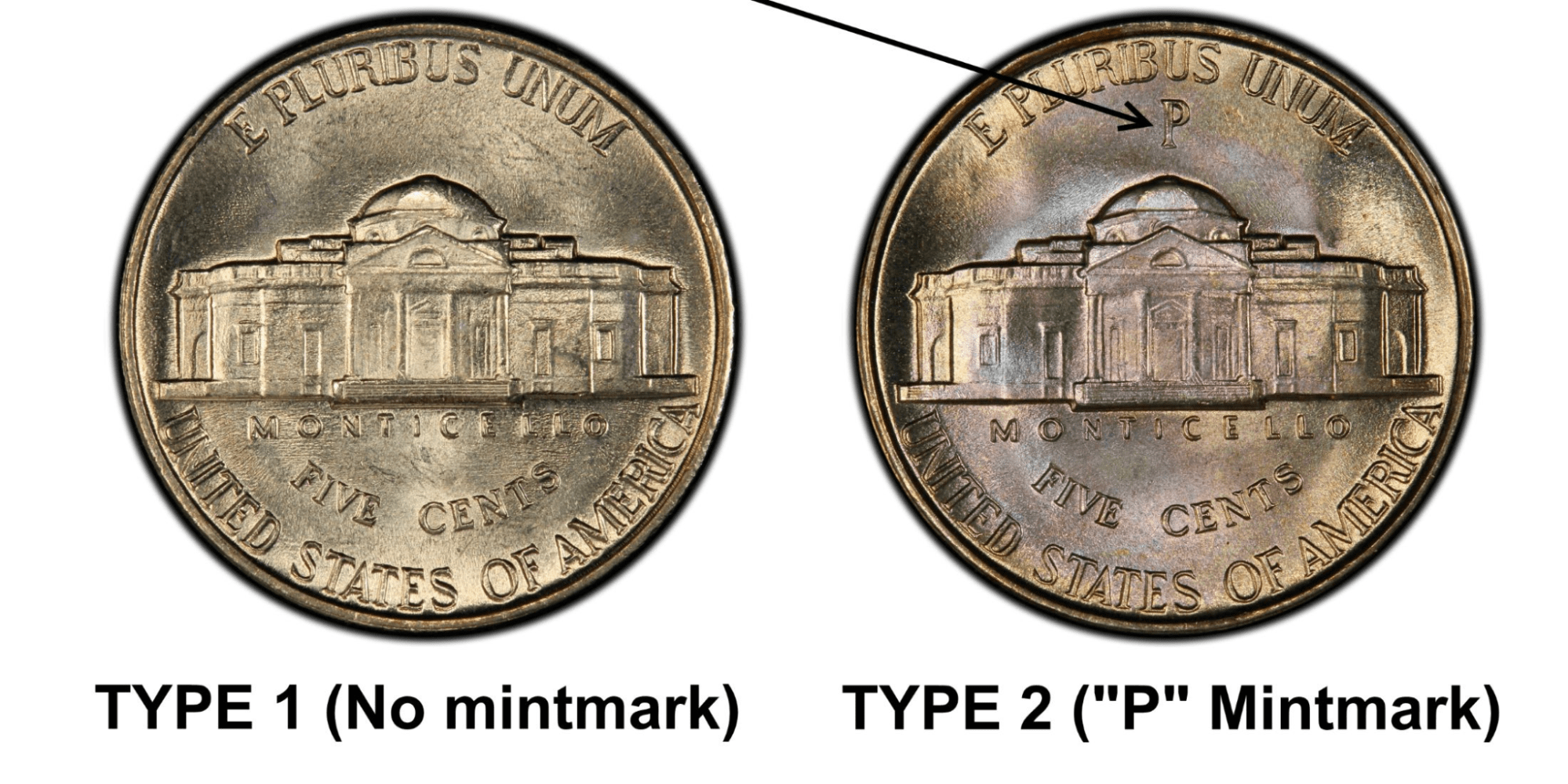 What other United States coins are made of silver? 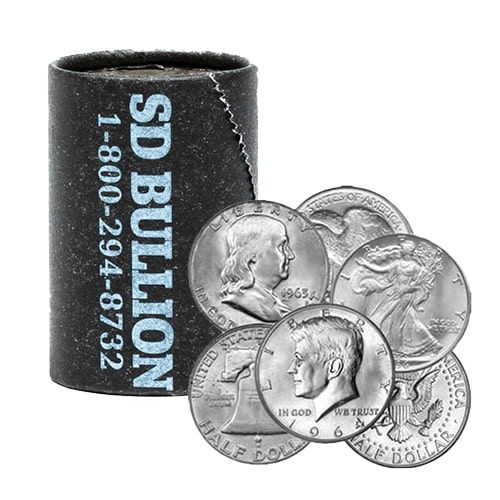 Up until 1964, silver was used in the composition of the dime, quarter, half-dollar, and dollar coins. It was only in 1965 that the precious metal was fully removed from US coinage due to its increasing value.

Pre-1965 silver coins are sometimes called “junk silver,” though that is not an indication of their condition, but rather because they do not carry any numismatic value and are mostly traded based on their precious metal content alone.

Read everything you need to know about Junk Silver in our FAQ.

Still, pre-1965 dimes, quarters, half dollars, and dollars are minted with 90% silver alloy and, nowadays, are purchased as an investment. Those can include:

In addition to these 90% silver coins, the Kennedy Half Dollars minted from 1965 to 1970 contain a composition of 40% silver.

Junk silver, or Constitutional Silver, can be purchased at very little premiums over the silver spot price and is seen by experts as a sensible way to increase one's physical silver holdings to diversify an investment portfolio.

What years were nickels made of silver?

The US Nickels made of silver are those minted between 1942 and 1945. The usual composition of other nickels is 75% copper and 25% nickel, but during the war, they were made of 56% copper, 35% silver, and 9% manganese. That is why these coins are sometimes referred to as "silver war nickels" or "wartime nickels."

They do not. 1964 Jefferson Nickels contain 75% copper and 25% nickel. The only five-cent coins struck with any silver content are those produced between 1942 and 1945, also known as the "silver nickel years". They contain 35% silver, 56% copper, and 9% manganese. This special alloy was only used during WWII because much of the copper and nickel produced in the country was redirected to produce critical war material.

When did they stop making silver nickels?

The silver nickel years ended in 1945, with the conclusion of the World War II. That meant most of the copper and nickel produced in the country was not redirected to the war effort anymore, so the United States Mint resumed the usual composition of the nickels of 75% copper and 25% nickel.

How much are silver nickels worth?

Silver nickels are some of the most valuable coins to collectors. The ones bearing "S" or "P" mint marks for San Francisco or Philadelphia Mint can be worth over $10,000 if in mint state condition. For instance, a 1944-S "Full Steps" Jefferson Nickel can be worth up to $18,000. The term "Full Steps" is a specific designation for Jefferson nickels with 5 visible steps of Monticello, Jefferson's famous estate.

How much silver is in war nickels?