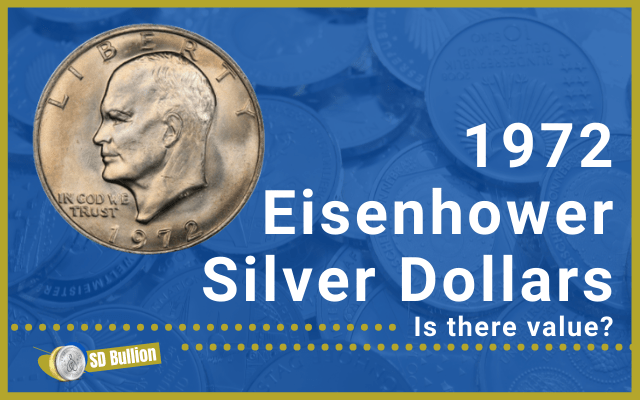 A brief history of the Eisenhower dollar

The Eisenhower Dollar coin series was the first one-dollar coin after the Peace Dollar Series. The United States Mint issued this coin from 1971 to 1978. There are business strikes from the Philadelphia and the Denver branches, the last one bearing the “D” mintmark. In addition, coin collectors and investors will be glad to know there are uncirculated and proof versions as well, engraved with the “S” mintmark from the San Francisco Mint.

Frank Gasparro, the Chief Engraver of the US Mint, is the author of their design. He aimed to honor the World War II General and late President Dwight Eisenhower and to celebrate the 1969 Apollo 11 Mission to the moon. Gasparro has also designed the Kennedy half-dollar coin reverse and the Lincoln cent Memorial coin reverse.

Due to the rise in bullion prices in the middle of the 60s, it became unfeasible for the US Mint to maintain silver as a component to circulated coins. The silver bullion price exceeded by far the face value of the coins.

After the death of former President and World War II General, Dwight D. Eisenhower, House Representatives from both parties moved for the approval of a dollar coin in his honor. Originally, they intended for the coin to contain a silver alloy. But given the rise in silver prices, they opted for a clad copper-nickel composition. Nevertheless, uncirculated and proof versions, intended for collectors, do have silver in their composition. After the one-dollar coins, quarters, dimes and half-dollars followed the same recipe.

Known as the Ike Dollar, the Philadelphia Mint was responsible for the first prototypes in 1971. History tells that the government collected most of these prototypes for further testing and melted them to make new Eisenhower dollars. So the leftovers could be worth a good price because of their rarity.

As for the 1972 version, The US Mint produced close to 170 million circulation strikes of 1972 Eisenhower Dollars in the Philadelphia and Denver Mints. Coins struck in Denver bear the “D” mintmark. In addition, they produced more than 2 million uncirculated versions (known as the “Blue Ike”) and over 1.8 million proof coins (known as the “Brown Ike”), both in the San Francisco Mint, engraved with the “S” mintmark, which could be purchased for a premium.

1972 is a key date in the series because there were three varieties that year as the Mint adjusted the design.

The Philadelphia Mint produced three varieties of 1972 Ikes – because of Eisenhower’s nickname –, using the cupro-nickel alloy. These coins can be easily identified because they have no mintmark.

The obverse side of the coin features President Eisenhower’s profile, facing left, with the word “Liberty” above his head. Under his bust, the inscription reads “In God we trust”, with the date at the bottom. The mint mark, when engraved, comes below the President’s neck.

All the other differences are present on the reverse side of the coins.

The coin's reverse displays the Apollo 11 insignia. The American eagle seems to be perching over the surface of the moon, carrying an olive branch. The thirteen stars surround the eagle. The planet Earth is placed above the eagle’s head and right-wing. The words “United States of America” are written on the top of the coin, the motto “E pluribus unum” underneath the eagle, and the denomination “One dollar” on the bottom.

North America, Central America, and the Caribbean Islands are also featured in the Eisenhower dollar. And the difference between the three types of Philadelphia coins is the accuracy of these islands' appearance.

The type 1 variation features the three islands off the coast of Florida. Despite its low relief appearance, it is possible to distinguish the islands.

Type 2 is the scarcest, hence the most valuable of them. It is a higher relief feature, the planet Earth is clearly rounded, but the crescent-shaped Florida peninsula seems to be only one large triangular funnel area, and the Caribbean Islands look like one singular big island, rather than three small ones.

Type 3 has also a high relief design. Just like type 1, the three islands are very well defined, but the upper-left island is located far past the western edge of Florida. In addition, the bottom left island is a little larger. The Type 3 design was used from that moment on.

Denver also produced the 1972 Eisenhower Dollar using the Type 3 design and the same double-die. They also display the letter “D” under President Eisenhower’s neck, on the obverse of the coin, as a mintmark.

San Francisco Mint, on the other hand, produced only a limited series of Silver clad Ike dollars, in both uncirculated and proof versions, for coin collectors. They are 40% silver, 60% copper and can be recognized by the letter “S” engraved on the obverse side of the coin, under the President’s neck. They did not produce any copper-nickel clad proofs.

The San Francisco-proof coins were sold in a plastic holder, packaged individually inside a brown box. That’s why they are commonly referred to as “Brown Ikes” or “Brown Pack Ikes”. They boast a mirror-like luster, their details are much stronger and more noticeable.

The uncirculated coins were involved in a transparent plastic - pliofilm - and also individually encased in a blue paper envelope, hence “Blue Ikes” or “Blue Pack Ikes”. They have a satiny appearance, which is not that bright, and their details are not as strong as the proof ones.

Many of these Eisenhower Dollars packed by the United States Mint have lost their original government packaging and are placed in albums or cases. However, it is still possible to find this kind of Ike dollar in original holders, which provides them with the most value and is prone to receive higher premiums from a coin dealer.

That reverse design featuring the Apollo 11 Mission was used until 1974. Instead of the bald eagle landing on the moon, the editions of 1975 and 1976 of the Eisenhower Dollar design got personalized content to display the Bicentennial of the United States date marks of 1776 and 1976, showcasing the Liberty Bell at the center and the moon in the back.

The value of a coin may vary according to many factors, but regardless of its condition, any coins are worth at least their metal melt value. As silver spot prices are higher than copper and nickel, the 40% silver Ikes tend to be more expensive than low-graded circulated versions of the clad coins.

The San Francisco Mint was the only one to produce them. Therefore, all the coins minted with an “S” under the President’s neck, are better priced.

Thus, the silver-clad coins weigh more than the copper nickels. They contain .3161 oz of silver, and their total weight reaches 24.59 grams, while the copper-nickels, 22.68 grams.

Another important aspect that influences the value of a coin is its condition. The Sheldon Coin Grading System is an internationally accepted parameter of evaluating coins that determines how valuable they are, based on their condition.

The 1972 Eisenhower Silver Dollar is valuable for both: for its numismatic and bullion value, which is interesting for coin collectors and bullion investors. But even the worn copper-nickel clad ones, especially the Philadelphia Type 2 Ike dollar, which is a key date and rare variation, are worth looking for.

Let’s take a look at the value of each variation below:

How much are 1972 Eisenhower dollars worth?

The Eisenhower Dollars are very popular among collectors especially because of their numismatic value. Even the most common and worn ones are worth having in a collection. The Philadelphia 1972 Ikes Type II variation, the rarer one, is priced at $10,500 in MS66.

Are silver dollars from the 70s worth anything?

Any coin is worth at least their metal content melt value, despite their denomination. Those which are 40% silver dollars, like the proof Eisenhower Dollar, tend to be better priced than common dates, low graded coins because of their silver content (intrinsic value). According to scarcity and condition, it is possible to find coins reaching thousands, for example, a 1971-S in MS-68 grade for more than $6000.

Are Eisenhower silver dollars worth anything?

Eisenhower dollars carry not only their metal content melt value but also numismatic value if in high mint state condition. Some of them are rare and consequently more precious for collectors, like the 1972 Eisenhower Dollar Type 2 from Philadelphia.