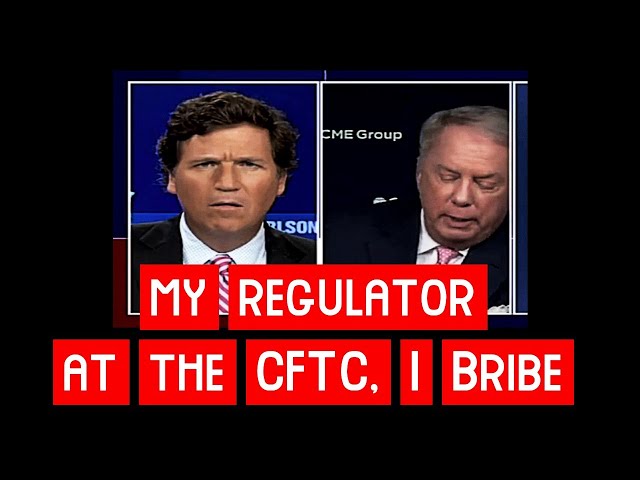 Ghana Buying Oil With Gold Bullion Instead of USD

Terry Duffy, the CEO in charge of the CME Group's COMEX NYMEX futures markets, has recently been doing victory laps on podcast interviews and in major media TV channel segments dunking on the ongoing FTX and SBF cryptocurrency exchange failure.

Last week, in perhaps one of the more bizarre Freudian slips, T-Duff, as I’ll nickname him here. He just blurted to Tucker Carlson and FOX viewers that he bribes the CFTC, the supposed regulator of the futures commodity derivative markets in the USA.

No, that is not a deep fake clip, and yes, I am pretty sure we all just heard that correctly.

There was no follow-up question from FOX's Tucker Carlson regarding Terry's bizarre law-breaking admission live on TV.

The interview's source link and other past videos we have done regarding the sordid history of the world’s largest gold and silver futures market exchange called the COMEX, its invented politically appointed revolving door regulator called the CFTC, and even other things big shot CEO T-Duff has said publicly over the years.

To our fellow US citizens and USA viewership, we wish you all a Happy Thanksgiving week.

If you are still actively acquiring a prudent position of physical gold and silver bullion, check out our Black Friday deals and keep an eye ahead for coming Cyber Monday deals to follow while inventory supplies last.

Be sure to Subscribe to Our Channel for continued SD Bullion Market Updates with entertaining bullion market-related news and insightful information to come.

The spot silver price climbed slightly higher to close the week around $21.50 oz, with the gold spot price barely beyond $1,755 oz.

The gold-silver ratio fell slightly, with silver's outperformance versus gold this past week down to just below 82.

The West African nation of Ghana is planning to buy oil with physical gold bullion instead of fiat U.S. dollars in a signal that major commodity trading in markets is slowly changing in big ways.

Following up on the forecasted major silver supply deficit of nearly -200 million troy ounces of demand outstripping silver supplies in this year 2022.

This interesting silver spot versus COMEX underlying warehouse inventory chart was floating around on Twitter last week and for silver bullion bulls like myself.

The top portion is the ongoing silver spot price action from late 2003 until about a week ago.

The bottom half of this chart linked above appears to measure drawdowns on a percentage basis of underlying COMEX silver warehouse stockpiles vanishing thanks much in part to outsized demand overwhelming new silver supplies mined and recycled over the last few years.

Look back at the peak of the 2008 GFC, back when seemingly endless QE bailouts began. You see, back then, there were 95 weeks or nearly two years in which the COMEX's silver stockpiles drained from the system.

Is it possible the silver market is setting up for another major run to the upside to come?

This past weekend I spoke with the Wall Street Silver channel.

And please keep in mind I don't make their video titles up. I'll also leave a link to that interview if you want to hear more about the massive silver supply deficit this year, dwarfing last year's 2021 supply deficit.

I am thankful for you all out there and our SD Bullion team.

That is all for this shortened holiday week.