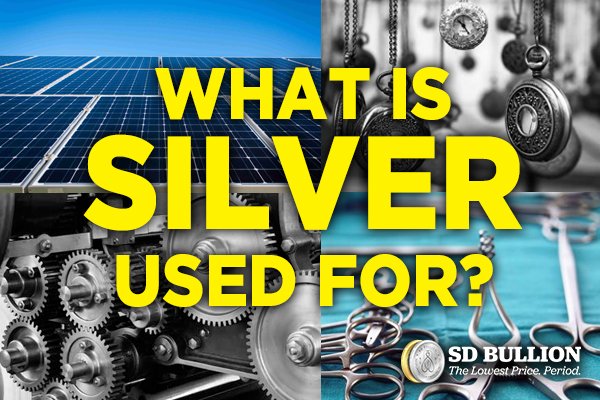 Silver - (n) a chemical element with symbol Ag and atomic number 47. In its pure .999 fine form, it is a solid white, highly reflective, heavy, dense, comparatively soft, malleable, ductile metal which can tarnish black with prolonged exposure to open air. It is a valued precious metal that gets used for coinage, jewelry, and thousands of modern-day industrial and electronic applications.

We humans have been mining silver for over 5,000 years.

Silver is born from exploding stars; silver is virtually indestructible on a molecular level.

The vast majority of all the silver we humans have ever mined is no longer easily accessible nor with us today.

Unlike gold, silver has often been cheap enough in fiat currency valuations allowing humans to waste trace supplies of it in cumulative large un-recycled amounts.

In other words, often we humans have thrown silver away in nonrecycled trace amounts. Think about all the electronics you have thrown away in your lifetime. Well, they mostly all had trace silver within them.

Silver is highly used both in industrial and electronic applications.

Today there are still some 4 billion ounces of silver bullion held by investors above ground.

As well, there are many more billions of silver ounces spread around the world in various forms of .925 jewelry, silverware, as well within an industrial or electronic application like within your computer, your cell phone, etc.

Many electronics recycling companies now mine for precious metals like silver in old hardware and electronics before being lost to landfills. Although with less than 20¢ per cell phone or 50¢ of silver laced per computer, how much of this silver will be retrieved as opposed to thrown out remains a real question.

Perhaps the most fantastic thing about silver is how multivariate and wide its modern-day uses are.

Silver is second only to crude oil (or arguably freshwater) in the amounts of items and things it is used in for our modern ways of life.

Modern and Industrial uses of Silver include:

Why are there so many Silver uses?

Silver has an extremely high reflection for light, more so than any other metal. Next time you go to the bathroom, take a look at yourself in the mirror. You are likely looking at your silver tin paste reflection.

Silver is the most electrically conductive metal of all.

Silver is the best both thermal and electrical transmitter of all metals.

Silver is germicidal by nature, meaning it kills germs. Thus silver is used in various antibacterial applications. Silver's natural anti-germ properties are perhaps one of the reasons as to why it got its start in silverware, where the old European aristocracy likely got sick less often eating with silver cutlery.

Silver is easily malleable and ductile, only slightly harder than gold. As silver is very flexible, it can get used in various ways, all the way down to the tiny micro and nanoparticulate level.

The precious element of silver gets only produced in star supernova. In other words, the production or origin of silver elements only comes from the most violent phenomenon we human beings know. It's not replicable.

Although silver may get found in small trace amounts in both seawater and human beings, silver is a scarce and precious metal here on Earth.

Without it, we would have a much more difficult time with our modern ways of life.

Silver Mining Per Year Since 1,000 AD 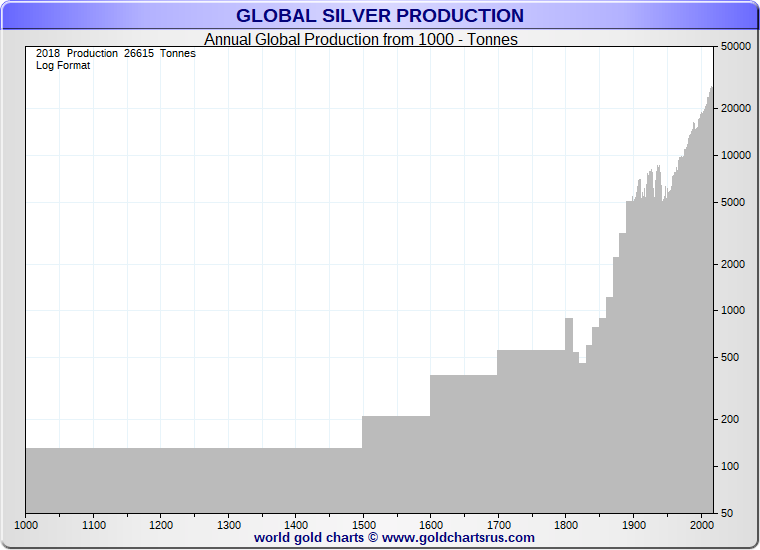 How Many Ounces are in a Ton of Bullion?

But again, we have lost the vast majority of the silver displayed in that chart over human history.

We conservatively estimate that the world has only about 4 billion troy ounces of silver bullion in .999 fine form.

Geologists estimate that the element silver has an Earth concentration of 0.075 parts per million.

To give you a perspective on how rare silver is if we converted silver’s parts per million rarities into time durations. We would only find 1 minute of silver in just over 25 years of other Earth element extraction.

The following American football field illustration attempts to show the yearly amount of physical silver ore we humans dig from the Earth’s crust every year on average. Picture a .999 fine silver bullion cube of some 90 feet on all sides.

Compare that annual silver mine physical bullion output cube on the left versus the tinier illustrated silver cube on the right. That one on the right represents what the 1980 Hunt Brothers held to corner the silver market back then supposedly.

Contrary to the ongoing falsehood that the Hunt Brothers were trying to corner the silver bullion market. Those three silver speculating brothers only held a small fraction of the then physical silver supply back then.

The following video gives you a brief insight into physical silver’s origin, how we humans currently mine and refine it as well how silver is being used today by both industry and investors worldwide.