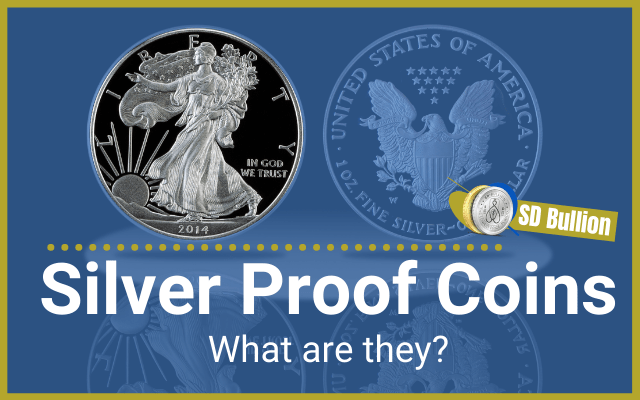 What Is A Proof Coin?

Jump To: History | What Are they? | How Are They Made? | What Do They Look Like? | Why Buy? | Different Types | US Mint  | Bullion vs Proof vs Uncirculated| Proof vs Mint Condition | Reverse Proofs | FAQs

Ever since the United States Mint began selling proof coins to the general public, they have become more and more popular with each passing year. Proof coins have a special place in the heart of every coin collector. Their superb finish is sure to appeal to investors and numismatists alike.

That being said, many people still don’t know exactly what a proof coin is and what is the difference between one and a regular circulating coin. If you are new to the coin collecting world, or you are considering diversifying your portfolio by purchasing some precious metal coins, we are here to help you out. In this article, we will delve deep into the manufacturing process of proof coins and learn more about their history.

The origin of proof coinage in the U.S. dates back to the foundation of the U.S. Mint in 1792. However, proof coins have been struck all around the world for a long time. Historically, Mints would strike proof coins in order to check the dies and for archival purposes. The idea was to make sure the minting process would go well once mass production started.

In the U.S. Mint, a young machinist and die maker named Adam Eckfeldt was one of their first employees. Eckfeldt used to take special care and extra time preparing the coin dies to assure the finest quality for the first U.S. coins. Back then, however, the term “proof coin” was not generally used. They referred to these early samples as “specimen” coins.

The U.S. Mint began giving these specially treated coins as gifts to important mint visitors, politicians, and famous coin collectors. With time, they started selling them to the general public at a premium.

But what exactly are proof coins and why are they so popular nowadays? Keep reading to find out more about the difference in aesthetics and in the manufacturing process between proof and regular coins.

What Are Proof Coins?

The term proof coin refers to coins struck with a high-quality minting process. It is specifically referring to a difference in the manufacturing process. The dies are polished in order to give the blank fields a smoother, often mirror-like finish, and the design devices a frosty look. This visual difference between the background and the relief is called a cameo contrast.

Proof coins are not produced for general circulation. As we have mentioned before, they were originally intended for checking the dies before the production of circulating coins began. Nowadays, many mints around the world, including the US Mint, produce special proof sets specifically for collectors, special occasions, and other numismatic purposes.

Proof coins intended for collectors usually come in protective capsules and with an official Certificate of Authenticity.

How Are Proof Coins Made?

The making of a proof coin starts by giving proof coin blanks a special treatment. They are hand-polished and cleaned in order to make sure they obtain high-quality strikes. The dies also receive special polishing and are fitted into the coining press. Then, coins are struck at least twice to guarantee maximum design details.

It’s the polishing of the dies that makes the surface of the coins look different from regular circulating coins. In addition, proof coins typically receive squared-off rims. The process of handling these coins is also very different from regular issues. They are hand-fed into the presses and carefully transferred from station to station by an employee with gloves, rather than just thrown into bins.

As previously mentioned, proof coins showcase mirror-like finish fields and frosted design devices. The two pictures below represent the obverse of the American Gold Eagle, both in proof and BU versions. They should give you an idea of the visual difference:

Many mints around the globe, and the U.S. Mint especially, produce proof coin sets and sell them mostly to coin collectors. The extra effort put into these coins results in extremely high-quality products. U.S. Mint proof coins are especially coveted by numismatists.

As the popularity and demand for proof coins increase, more and more of this kind of product is introduced into the market each year. Thus, proof coins will almost always carry higher premiums than regular coins. Nevertheless, they have a better presentation, top-notch quality, and higher scarcity.

The higher degree of details and the fact that there are simply fewer of them in the market is a great incentive for coin collectors and numismatists. If you are thinking of becoming a coin collector, you should definitely consider adding a few proof coins to your collection.

What Are The Different Types Of Proof Coins?

Early samples of proof coins didn’t really display a cameo effect. They were identified only by the higher display of details on their surface.

A reverse-proof coin, as the name suggests, portrays an “inverted” finish. Unlike a proof coin, a reverse proof coin has the mirror-like polish applied to the design devices in relief and frosted fields in the background. An enhanced reverse proof coin means an extra layer of polish has been applied onto specific parts of the design to greatly increase the visibility of its fine details.

A piedfort coin is a special kind of proof coin. It has double the thickness of a regular-sized proof coin and, consequently, double the weight. It originated in the twelfth century in France but was also struck in Britain during the Middle Ages and until today. The reason the French and the Royal Mint would strike them so thick is not really clear. One theory is that they wanted to avoid getting them mixed with regular coins. Many dignitaries received these coins as gifts at the time.

A proof-like coin, although shinier than a regular circulating coin, is not really a proof coin. When a particularly new and brilliant planchet is fed into a recently polished die, it may result in a nicer-looking coin. However, unlike real proof coins, proof-like coins will not receive any more special treatment. They are only struck once, like all other business strike coins. And they will often not receive any special handling throughout the rest of the minting process.

As we have mentioned before, almost every country has issued proof coins. However, United States Mint proof coins are, no doubt, among the most popular ones today. The US Mint has produced proof sets and reverse proof sets for most of their coin programs.

In 1936 the United States Mint began selling proof versions of American coinage. Proof coins could still be bought individually, but the set containing one proof version from each circulating coin started to grow in popularity.

From 1950 to 1964 the US Mint stopped selling proof coins individually. Collectors could only purchase the whole set. That is the reason why all proof coins from this period have the same mintage.

1964 was the last year the Philadelphia Mint produced proof sets. Until 1967, the branches of West Point, Denver, and San Francisco produced them without any mint marks. As of 1968, the San Francisco Mint took over the production of proof coinage. That is the reason why most proof coins since 1968 bear the “S” mintmark. Since 1975, the main focus of the San Francisco Mint has been to produce coins for collectors and investors. The proof coin set is their main product.

Ever since 1992, a Silver Proof set became a standard product in the US Mint, containing a silver proof version of the dime, quarter, and half-dollar. Recent years have also included a Lincoln Cent with a reverse cameo effect (reverse proof).

What's the difference between bullion, proof, uncirculated, and circulating coins?

Bullion coins are designed for investors. Although they have a face value, their prices fluctuate according to the spot price of the day. In other words, their worth is based on their intrinsic value, or their weight and precious metal content. The United States Mint doesn’t sell these coins directly to the general public. Rather, they sell them to bullion dealers across the country, who then resell them to investors.

Proof coins are the highest quality coins the US Mint produces. Their exceptional finish derives from their manufacturing process. The extra care and effort applied in each step of their making result in a superb finish, often with cameo effect, where the design devices are frosted and the fields are reflective.

Uncirculated coins are produced with specially burnished blanks. They contain a soft, matte-like finish. Although more brilliant than regular circulating coins, uncirculated coins don’t quite display the cameo effect from proof coins. As the name suggests, they are also not intended for circulation. They come with an official Certificate of Authenticity.

Circulating coins are coins intended for general circulation and everyday transactions. They are sold directly by the United States Mint in rolls, bags, and boxes and do not carry a Certificate of Authenticity.

What Is The Difference Between Proof And Mint Condition?

Proof is a term that refers to the coin’s method of minting, not its condition. It is a result of a highly polished planchet. It gives the fields a mirrored effect and the design a frosted look. Proof coins will always be proof coins, regardless of their grading.

A reverse proof coin contains the mirror-like effect equally applied on every piece of the device, while the fields receive a frosty look. In other words, the visual effects are inverted in relation to a regular proof coin.

What Are the Advantages of Collecting or Investing in Uncirculated Coins?

Uncirculated coins go through a more careful process than regular circulating coins. This results in more brilliant features on their surface. Therefore, uncirculated coins could be a better option if you want to keep them on display. Numismatists and coin enthusiasts who enjoy studying the fine details of the design will enjoy the shinier look.

Are Proof Coins A Good Investment?

Proof coins are intended for collecting and usually carry a higher premium than regular BU (Brilliant Uncirculated) coins due to the extra effort that is put into their manufacturing process. That does also mean, however, that more often than not, you will be able to obtain a better price than a BU coin when reselling it.

How do you tell if a coin is a proof?

Proof coins are sold in a set or protective capsule and come with a Certificate of Authenticity. You can identify them by analyzing the mirror-like finish on the fields and the frosted look on the devices.

Are Proof coins worth more?

Overall, yes. Proof coins receive extra layers of polish, multiple strikes and are specially handled during the minting process. This extra care and effort that is put into their making translates into higher premiums over the spot price. Thus, the final price will generally be higher than regular BU coins.

If you are interested in collecting proof coins, make sure to check the ones we have in stock for you. SD Bullion offers a range of gold, silver, and platinum coins that are sure to sate your enthusiasm. Call us at 1(800)294-8732 or talk to one of our live agents through our chat on the bottom right of your screen.