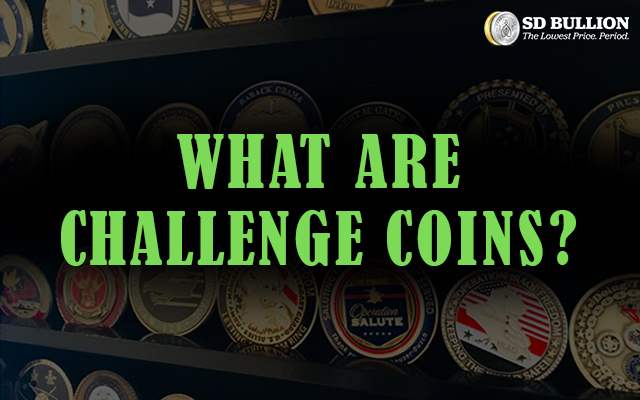 What Are Challenge Coins?

Should a person ever attend a military ceremony, where one soldier or accomplished service member is being honored, it wouldn’t be a wild guess to expect the presence of one other special, shiny guest.

In the hands of the unit commander, first sergeant, or other high-ranking officials who lead the ceremony, lies a challenge coin. Recognizing the receiver’s accomplishments, or perhaps boosting their morale, one thing is for sure: these shapely, shiny coins will not go unnoticed.

With the rise of custom coins in recent years, inspiring numismatics all around the world to know the latest challenge coin pricing, one thing is clear: more than a simple bit of metal, such exclusive objects are deserving of further detailing. A proper explanation about their uniqueness and history will hopefully lead to a good answer on what are challenge coins, exactly.

The History and Rules of Challenge Coins

There are different myths and stories as to how challenge coins came to be about, with options that date back centuries with the Roman Empire. Be it as it may, as far as modern culture goes, some main tales present themselves as plausible explanations behind this dazzling tradition.

As maintained by the most common and popular story, modern challenge coins were introduced in World War 1, due to the actions of one squadron’s wealthy lieutenant. Such a lieutenant ordered bronze medallions to be struck with his unit’s crest as the coin design, for them to be given out to each one of his soldiers; furthermore, honoring their unit as well as boosting their morale, rose the habit of carrying such medallions with themselves.

One young American pilot of said unit used to carry his metal coin in a leather pouch strapped around his neck at all times. Though, during a war mission, his aircraft was severely damaged by ground fire, forcing an emergency landing behind enemy lines; by doing so, the pilot eventually was captured by an enemy german patrol and had all of his personal belongings taken away from him, with the exception of one specific pouch, and coin holder.

Managing to escape one day, the airman acquired civilian attire and dressed up the part to not get recognized by enemies. After successfully blending in, the young one headed to an ally military outpost, where the French military personnel strongly disbelieved whether he was indeed an American soldier: the outpost’s decision was to execute the distrusted guest.

However, before any sudden action took place, the pilot got hold of his unit coin, which got recognized by the outpost’s soldiers. By buying him time, the airman's coin managed to have him prove his identity, and even have a French soldier give him a bottle of wine.

With the spread of a tale, was born the tradition of carrying around one’s squadron’s coin at all times, as well as an interesting challenge to ensure so.

Although they may have an interesting and rich backstory, challenge coins also deserve a proper explanation as to how their name was first brought up; for this question to be properly answered, the main word itself is no coincidence, being our first lead: challenge, as well as the challenge coin game that follows.

The challenge coin tradition ensured, after the events of the War, that soldiers carry around their custom military coin at all times; for such to be accomplished, a spirited challenge took place. A person, also known as the challenger, would ask to see the medallions of those from their military units, by showing their own challenge coin. This act is called a "challenge coin check".

Should the challenged not be able to show their coins, or more commonly, one be the last of the group to produce its coin, they would be responsible for buying the challenger a drink.

Continuing throughout the conflict, and even more so years after its end, this military tradition remained present, gaining more and more popularity, while - quite literally - coining the term of its shiny and perdured creation.

Moreover, throughout its history, certain challenge coin rules variations were brought up; for example, challenging members of a squadron to do push-ups whenever a coin was introduced by a challenger, or perhaps running certain lengths, along with other physical activities.

What Are Challenge Coins?

All things considered, challenge coins can be described as uniquely modeled pieces, bearing a multitude of designs, like an organization's insignia or unit's symbol. Also, personalized challenge coins have become fairly common in recent years, straying away from being exclusive to military members. A custom coin like such can be given to a person to attest their membership to an organization, honor an achievement or plenty of other reasons.

Mostly fitting in the palm of a hand, the small coins are usually made of metals such as bronze, copper, zinc, or even - in very special instances - some can be to the likes of bullion coins, like custom silver coins and gold coins.

What Does a Challenge Coin Represent?

By being gifted a custom challenge coin, one person is subject to all the meanings it may represent. Mainly, it can attest for membership in a squad, unit, or organization; of equal importance, they can honor one’s achievements or participation in a special task or event.

On the whole, there are different scenarios on which a challenge coin or medallion can be given out to a person. Before taking a look at certain examples of these and samples of said coins, it’s wise to illustrate the inspirations and motives behind them as well.

How Do Challenge Coins Motivate?

One key aspect of receiving a challenge coin or medallion while being part of a special gathering has much to do with links and ties. By best representing unity, they furnish a singular bonding experience between all of its recipients.

On the same note, it is notorious in the military for accomplished soldiers to display their coins and medals acquired through well-performed duties - be it through custom-made racks, a display on the wall, or even a belt buckle. Nurturing a sense of pride and honor, they are the result of their years of greatly appreciated service. The coins may represent the units which one might have served, missions are done, as well as military officials and leaders they might have met.

Also, in recent years a new use has been given to challenge coins, from the actions of certain corporations and even civilians. Police officers and other law enforcement representatives, for instance, have had their own pieces in the past. They have been commonly used as a means to identify one’s brand or logo (being handed out at a convention or conference, for example), while also being ordered by local events, school activities, and like-minded communities.

Primarily being a means of reward for outstanding services or special achievements, custom military coins are used as useful instruments to boost one’s morale. Their context of being given out to U.S special forces units dates as far as the Vietnam War and happens in a variety of different coins.

The Army Challenge Coin is given as a show of camaraderie. An official, petty officer, or commander's coin bears symbols and mottos representing their office or unit. Mostly round, the coins can also be pentagons or even dog tags to go around the neck.

The same goes for Navy challenge coins and Air Force challenge coins, with the latter having, for example, one traditional coin given to its cadets upon graduation - the first of many, for most soldiers.

Likewise, U.S Presidents, since Bill Clinton, also carry their own uniquely designed challenge coin.  They are to be presented to foreign dignitaries and special guests, as a welcoming and respectful sign. Besides, such coins are also commonly handed out to U.S troops.

Some other famous challenge coins designs can be mentioned, given their vast recognition and collectibility. These shiny pieces, after all, are bound to draw the attention of many numismatists out there.

Examples of those are: