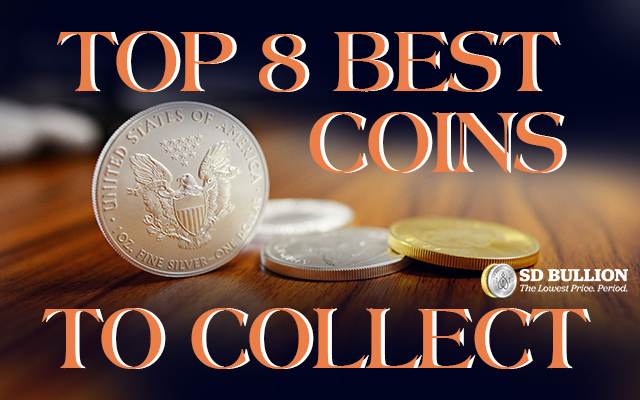 Coin collecting is, without a doubt, one of the most interesting hobbies a person could take, given the plenty of interesting factors that come with it. Only a collector can best define the enjoyment of owning an ancient rare coin that was around during the Roman Empire or perhaps bringing up that one-of-a-kind quarter with a minting error to add to any numismatic conversation.

Along the same lines, contrary to popular belief, coin collecting does not require spending too much money to get started. Whatever the case may be, owning a coin collection is a hobby that has a lot of enjoyment to offer, with knowledge as your ally and helpful tool. Some research allied to your interests makes room for a great first step in the direction of a unique display of coins.

With that in my mind, this list presents a series of good options to add value and substance to your portfolio, featuring some examples that are sure to catch yours - or someone's - attention.

Have you ever had or seen a 2 cent or 3 cent coin? Or perhaps a 3 dollar gold coin?

If the answer is no or something closer to a confused look, then these coins are bound to be a perfect candidate for an interesting collection or portfolio.

Throughout American history, a few special pieces with odd or unusual denominations were minted by the US Mint, those of which can be featured in a variety of collector’s holdings out there as engaging, curious exhibits. A good example of these is the 1864 Two Cents coin, a piece that was much sought after upon its release, and a good option amongst collectors and numismatics alike.

If you’re on the lookout for an addition to your collection that goes off-the-beaten-path, with a coin value that is sure to bring attention from your friends or family, these usually unknown pieces can be a great choice, sure to cause a few confused faces and curiosity.

If there’s one thing we can take from a modern bullion and commemorative coin is that, if anything, they represent much more than the monetary value accompanied. Every astonishing design and story behind a coin is one of the reasons collectors dedicate their time and effort to such a passionate hobby.

In view of this, it should be noted that modern coins and their industry isn’t something that came to be about overnight. As a matter of fact, the answer lies centuries back in mankind’s history.

Early civilizations such as the Roman Empire and Republic, as well as the ancient Greeks, were notorious for using coins struck from precious metals as their currency, while at the same time honoring their deities, leaders, and values through their magnificent designs.

In the current day, it’s possible to acquire such ancient foreign coins at a reasonable price, being one appealing addition to your collection. One tangible piece of ancient history, symbolizing centuries of humanity’s biggest civilizations is available for prices such as $38 in the coin market, though values vary according to the piece’s condition, story, and scarcity.

Authorized by the United States Congress just over a month after the assassination of President John F. Kennedy, the half-dollar coin got redesigned in early 1964, honoring the memory of the late President.

Replacing the previous design that featured Benjamin Franklin’s depiction, the new half-dollar was hoarded by collectors and citizens interested in a memento of the fallen commander-in-chief. As time went by, the fifty-cent piece became one of the most collected silver coins of all time, with over 400 million samples struck in 1964 only.

The first Kennedy half-dollar is also the last circulating fifty-cent coin to have a 90% silver composition, which, allied to its availability and affordable prices, essentially make for a compelling increment to your collection.

Having its start in 1878, the Morgan Dollars are one of the most popular circulated coins to have ever been minted in US territory. Named after its designer, George T. Morgan, issues of this notorious silver dollar date from 1878 to 1904, as well as 1921 (before the switch to the Peace Dollar) and an exclusive 2021 issue to celebrate its centenary.

The Morgan Dollar is a favorite amongst collectors - being featured in a number of portfolios and particular silver dollar collections out there - due to reasons such as its collectability (having plenty of dates to be sought after), as well as their affordability, giving an aspiring coin collector a head start.

Some interesting examples of this silver dollar include the 1921 and 2021 issue, with the former having over 60 million examples minted, making for moderate, affordable prices in the market, while the latter is yet to be released, but sure to draw eyes from collectors and numismatics alike.

Whatever the case may be, uncirculated or circulated pieces of the Morgan silver dollar are well within the budget of your moderate, intermediate collector, while at the same time being a good option of collectible coins to start your portfolio.

Undoubtedly the most successful bullion coin program in the world, the American Eagles were introduced in 1986, with the Silver Eagle becoming the first-ever official bullion coin of the United States of America.

The program initially featured 5 different coins of silver and gold and reintroduced two of America’s most popular obverse designs - Adolph Weinman’s 1916 “Walking Liberty” for the silver eagle, and a modified image of Augustus Saint-Gaudens’ Liberty for the gold eagle.

Though in current days the coins carry an added sentimental and numismatic value to their price, they are considered a landmark in the modern bullion industry, helping reshape the way precious metal investing is done. They are available in circulated or uncirculated coin conditions, as well as their respective proof coin contemporaries. Generally speaking, one of the 1986 eagles may just be the valuable coin that can bring prestige to every numismatic collection out there.

Not many people are aware of the story behind the peculiar 1943 steel Lincoln cent, a case of a unique United States coin with a history-rich background. In preparation for combat in Europe and in the Pacific during World War II, the US Mint was given permission by Congress to make pennies from steel, with a thin coating of zinc, instead of using copper: an essential metal in manufacturing ammunition.

Although often believed to be more on the expensive side, over 1 billion pennies were produced in that year throughout US Mint’s Philadelphia, Denver, and San Francisco’s installations, and during that year only.

In general, this makes for an exciting and fairly common coin, which can be an incredible addition to a collection - and overall great conversation topic. Circulated, worn pennies of these are far from your expensive coin, and can usually be found for the price of a quarter, more or less according to their condition. Your local coin dealer or online sellers and retailers are bound to have issues of these and other old coins.

Extremely popular amongst collectors and coin enthusiasts, a doubled die variety of a coin is the result of a manufacturing error in the die that strikes the coin. Examples of these error coins are generally worth a significant premium over the piece’s regular price and are sure to be a remarkable element of any coin holding or portfolio out there.

Doubled die coins consist of a piece with two identical, but slightly offset images, that are the result of a misalignment of the die or hub during the hubbing process in a coin’s manufacturing. This additional, misaligned image makes for a rare and notorious feature for a coin, which does not fall short to be sought after by many.

To the best of numismatists' knowledge, examples of doubled die coins are some of the most popular pieces in the market. The 1955/55 Lincoln wheat penny, for instance, is known to be sold for over $1000 in auctions, with uncirculated examples going well over that margin. Some other examples include the 1916 5C Buffalo Nickel and cheaper options like the 1995 Lincoln penny.

The Indian Head cent is without a doubt one of the most iconic and popular coins that date back to the 19th century, having its mintage begin in 1859 and last until 1909 when it got replaced by the famous Lincoln cent.

By being struck in large quantities throughout most dates of its circulation period, the Indian Head penny retains an affordable price much like the Morgan silver dollar, which can essentially make for a good opportunity to start a collection. Consisting of different types of coins (that vary from the piece’s year, minting location, and condition), this series brings about a range of possibilities for the better choice of the collector.

Be it in Hollywood classics like “Ghost” (1990), one substantial coin collection, or valuable auctions in the numismatic world, this popular piece of US history makes itself present. All things considered, if you’re in the market for a riveting piece to your display or portfolio, the Indian Head cent is a great opportunity to suit your needs.

Check out our blog post about the most valuable pennies

How To Tell If A Coin Is Worth Money?

The best way to correctly assess the value of a coin is to first identify the piece in question. By doing so, one owner can have a series of price guides at their disposal that are the best alternative to give a rough notion of a coin’s value.

What Do Collectors Look For In A Coin?

Aside from personal taste and individual meanings for a person, it goes without saying that certain factors are considered a priority in a coin when sought after by collectors.

If you’ve ever seen the auctions that make the news or even examples such as the coins presented in this article, some things stand out from others, such as the coin’s condition (preferably uncirculated or in mint condition), the scarcity of the piece (how many were minted or still remain), as well as its individuality (doubled die coins, for instance).

These topics add up to put together some of the market’s most valuable coins when all factors are in place and perfectly aligned.

How To Know If My Coin Is Rare

Be it a silver coin, a penny, or a quarter that you think is worth money, how can a person know for sure if the coin they have is a rare piece? In that case, the best step forward is to seek the help of a coin expert or consulting a trusted numismatist, to make sure you get the right assessment and evaluation to grant you your certified coin.

If you are interested in starting your own collection of bullion coins or a specific coin series, be sure to check our products in stock. We present a range of historical, valuable coins, as well as bullion gold and silver coins to best help you take the right step to start an upright coin collection. Thank you for reading.