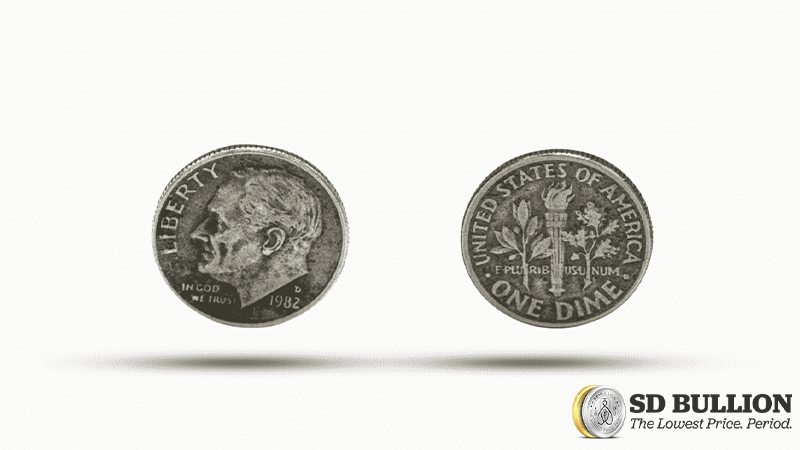 Every day we use coins, but have we ever stopped to think about what they are made of?

The earliest coins were made from electrum, a combination of silver and gold. The Lydian state minted these coins around 700 BCE, and merchants and consumers used them in trade. About 500 BCE, silver starter coins were minted in Caria, an ancient district in Turkey. These early coins depicted Greek gods, Roman emperors, and even tortoises and stags.

Coins have evolved over the years, but they have remained an essential part of global trade and commerce. Let’s take a look at the evolution of dimes and what they have been made from over the years.

The Coinage Act of 1792 established a national mint in Philadelphia, Pennsylvania. The following year, the U.S. Mint produced the nation’s first circulation of coins. The first coins were copper cents, which were larger and bulkier than the current quarter. They were met with public frustration due to their size.

The Act established approved denominations and their value, including stipulations that the coin’s metal composition had to cost less than what the coin itself was worth — to prevent people from melting down the coins for a profit.

Over the past three centuries, U.S. coins have gone through many variations. As with quarters and pennies, the dime has evolved both in design and its metal composition. The dimes in circulation today consist of an ultra-durable cupronickel composition made from an alloy of 75% copper and 25% nickel.

Did you know that the original dime in circulation was made from silver?

Over the years, fluctuations in silver value have caused the U.S. Mint issues and required new Congressional acts to regulate coin production further.

To prevent the melting down of coins, the United States decided to make the possession of private gold illegal in 1933. The most recent changes were made when Congress passed the Coinage Act of 1965. This act regulated silver in coins and helped eliminate issues involved with coinage costs and production.

The origins of the Troy weight are unknown, but in the 15th century, King Henry VIII of England implemented the Troy weight as the standard form of measuring the mass of precious minerals, such as silver and gold. The United States adopted this measurement method in 1828, and it remains the standard used by the U.S. Mint today.

The value of precious metals is continually fluctuating, but one pre-1965 dime, consisting of 90% silver (like junk silver), would be worth approximately $1.95 if you were to melt it down for profit.

A Brief History of Dimes

The first “disme,” as it was then called, was introduced in 1796. It consisted of a combination of 89.25% silver and 10.75% copper, but due to low demand, the U.S. Mint only issued a small number of them into circulation. This dime is known as the Draped Bust. The coin had two different designs that were approved and used for circulation, with differing heraldic eagles and a scaled-down U.S. seal. Both versions consisted of 89.24% silver and 10.76% copper.

The Draped Bust was discontinued in 1807, and the Capped Bust was introduced into circulation two years later. The coin was thicker than the previous dime and consisted of 89% silver and 11% copper. The Capped Bust became known as “the large coin,” but it was later reduced in size from 18.8 mm to 18.5 mm to keep within weight standards.

In 1837, the Seated Liberty dime’s first variation was introduced. It consisted of 90% silver and 10% copper. There were eight variations of the Seated Liberty dime between 1837 and 1891. The coin's mass and design continued to evolve, but the silver and copper percentages remained consistent. In 1873, a new Coinage Act attempted to make U.S. coins the world’s primary currency, but this failed to come to fruition.

One of the most sought-after coins is a rare Liberty Seat Dime from 1874, which could be worth upwards of $115,000. Only eleven thousand of these coins entered circulation, and it is unknown how many were melted down for their 90% silver content.

The Barber Dime was introduced in 1892. It borrowed heavily from the prominent designs in French currency, adopting a Greco-Roman style. This coin remained in circulation until 1916, when the Winged Liberty Head (or Mercury Dime) was minted. Like the Seated Liberty and Barber dime, the Winged Liberty Head maintained the same silver-to-copper ratio. As silver prices and values increased, Americans began melting Mercury Dimes down to make a profit off the silver.

Due to the hoarding of silver coins, Congress stepped into action and passed the Coinage Act of 1965, which alleviated coinage shortages by prohibiting silver use by the U.S. Mint. This introduced a more cost-effective cupronickel combination, which set the current standards for U.S. coins. The Franklin D. Roosevelt dime was minted in 1965 and remains in circulation today. Instead of using silver, the dime consists of cupronickel, an alloy of 75% copper and 25% nickel. This combination is commonly referred to as a “clad sandwich.”

Check related article on What are pennies made of

From highly sought-after silver dime coins to “a dime a dozen,” the dime has gone through many transitions over the past three centuries. Still, today’s Roosevelt dime has remained in circulation longer than any other version. This is a testament to the durability of cupronickel.