After Congress Stalls, All Eyes On The Fed

First, we know that back in July, Treasury Secretary Steve Mnuchin said how President Trump wanted to get direct payments to individuals and families in August, meaning Congress could pass legislation, and President Trump would sign it to get the money out to the American public. Secondly, the US Treasury, according to its most recent Daily Treasury Statement, dated Monday, September 14, has an operating balance of nearly $1.6 trillion, and while I don't pretend to know how much of that balance is already destined to go to a certain department or program, wouldn't it be safe to say that certainly, at least a portion of the gigantic cash balance could go to Cares 4.0 to be spent before the end of the fiscal year?

Nonetheless, I've been wrong about the fiscal side of things, and, just yesterday, various House Chairs from various Congressional committees released a statement explaining the reason for the ongoing stalemate, for lack of a better term. In reading the statement, it's pretty clear the stalemate comes down to partisan politics with both sides unable to agree on how much should be spent and on what.

Now that the fiscal side of things is temporarily on hold, all eyes are turning to the Fed and its monetary policy. In fact, today, at 2:00 p.m. EST, the Fed will conclude its 2-Day September Federal Open Markets Committee (FOMC) meeting and release a statement about the markets and the economy in general, and employment and price stability (inflation) specifically. This is also when the Fed decides to hold interest rates, the "Fed Funds Rate", steady, to cut interest rates, or to hike interest rates. It is not that the Fed is only able to make interest rate decisions during its FOMC meetings only, but in general, it is during these FOMC meetings in which the Fed announces changes to interest rates and other things as they pertain to monetary policy.

Fed Chair Jerome Powell holds a press conference at 2:30 p.m. EST. He reads the Fed's statement and takes some questions from reporters of various mainstream news networks. The conferences of late have been virtual, but no matter whether today's press conference is virtual, yet again, or whether the presser is in person, Powell will surely be asked, either directly or indirectly, for his assessment of the current fiscal side of things and what it means for the markets and the economy.

The press conference today is arguably more important than the statement because the markets are pretty much certain of what the Fed will and won't announce, especially when it comes to interest rates.

The CME Group, yes, that same famous group, or infamous group, or notorious group, or whatever group, has an interesting calculation and accompanying chart that displays the probability of a Fed interest rate hold, a hike, or a cut, and the chart is updated as various economic reports are released. However, we can see that no matter what economic report has "hit the tape" lately, there has been for some time, and there is now, 100% probability that interest rates will stay exactly where they are: 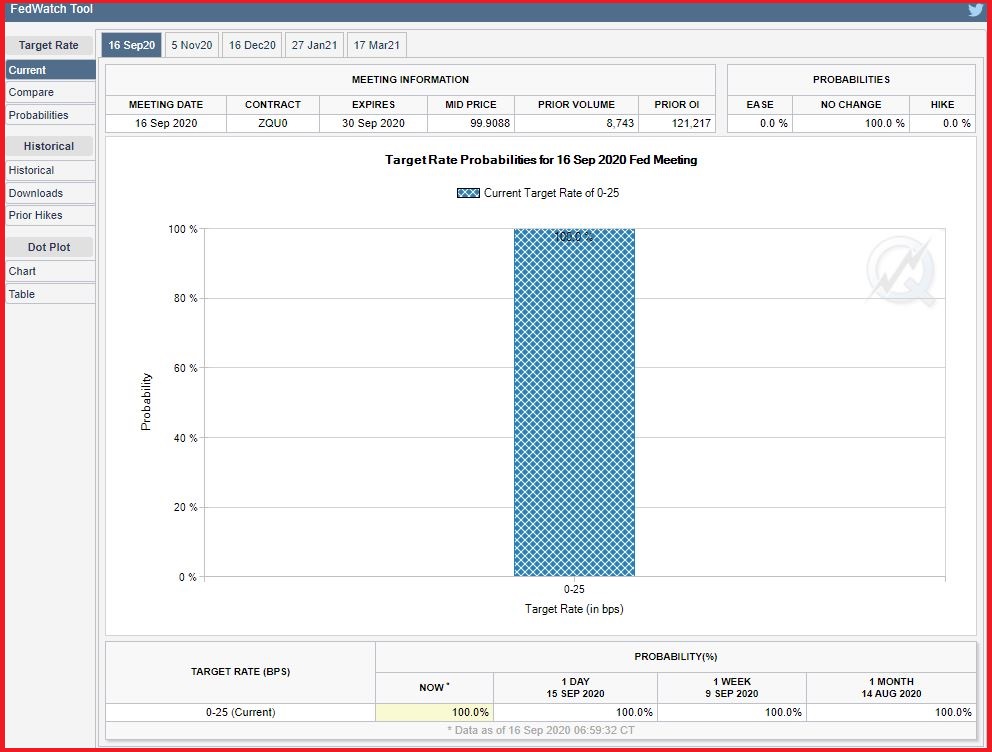 That chart is quite interesting, to say the least

The bottom line for Gold & Silver investors and stackers?

Fed policy has been and will continue to be bullish for precious metals, but most of the policy, as it currently stands, is arguably priced-in, with the exception being the possibility of some shocking announcement, such as aggressive yield curve control, or an announcement that the Fed is actively exploring negative interest rates, or something similar, and if that happens, or depending on what Powell says in his press conference, such as pertaining to the Fed's serious push for more consumer price inflation or something similar, we could see some real movement in gold & silver prices to the upside.

After all, Gold & Silver has been consolidating for a month and a half, and all they need is a spark.

Furthermore, if politicians in Washington can agree on additional stimulus before the end of the month, well now, that's just like adding gasoline onto a Gold & Silver fire!

For now, however, we're holding pretty steady on both metals, especially relative to each other: 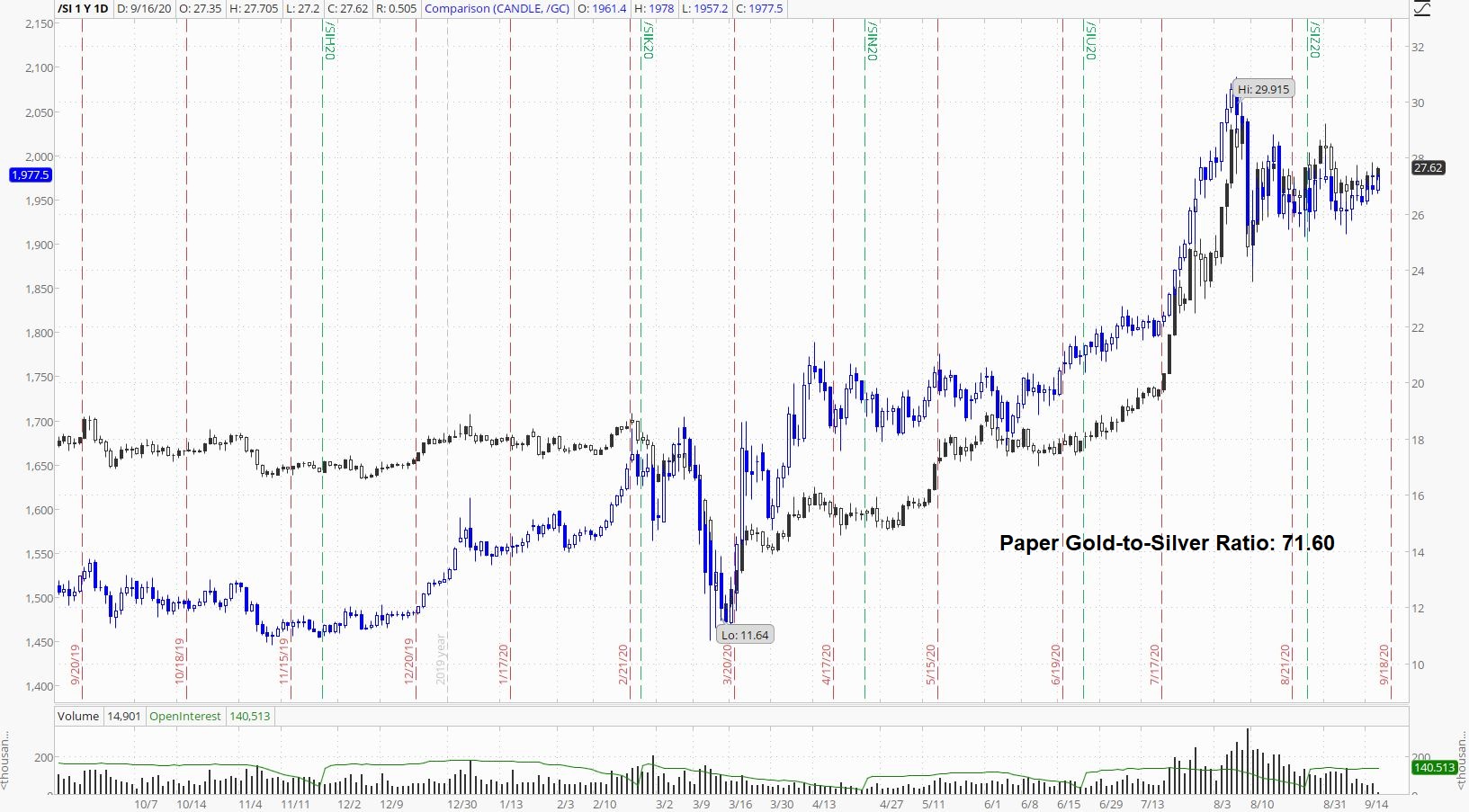 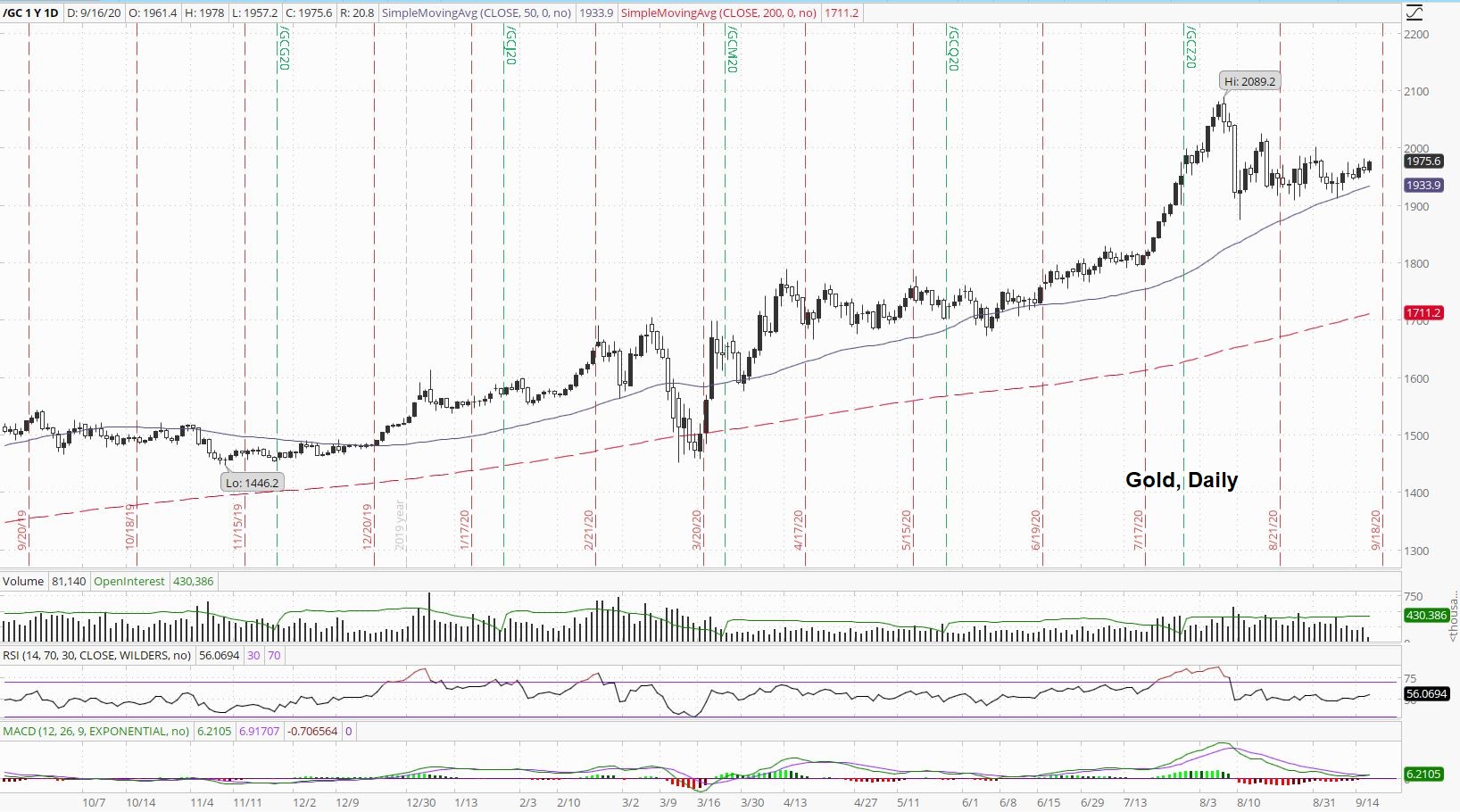 While the short-term chart set-up is arguably bearish with the two-lower highs, if we can get a surge here this week, possibly even beginning today, and if we can invalidate the lower-highs to call it an ugly sideways choppy channel, if that scenario plays out, then a breakout above $2,000 would be nice and bullish and do wonders for the short-term outlook. 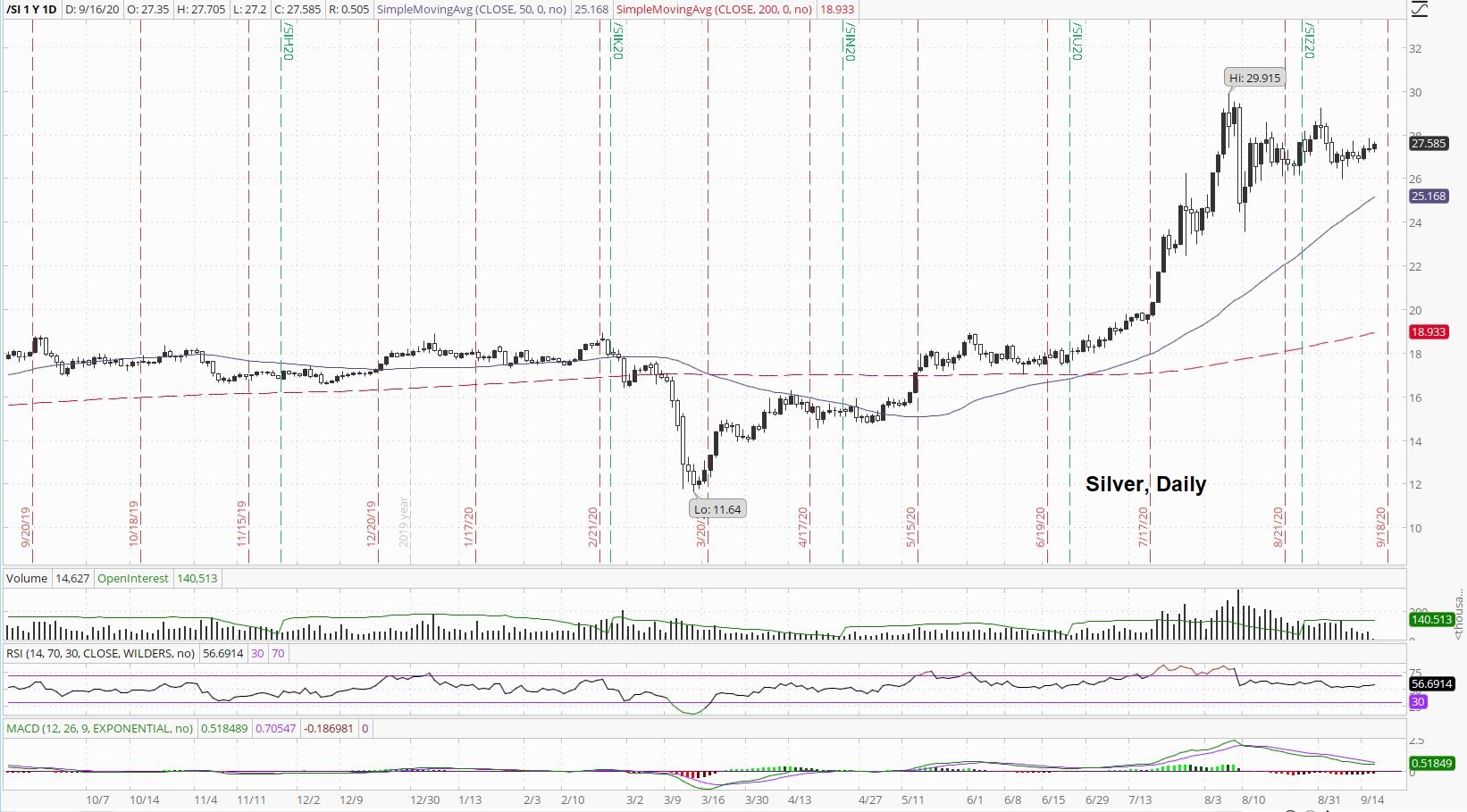 Silver does not have a series of lower-highs, but a higher-high already, so a breakout here would make silver bullish for the short-term, assuming another higher-high is put in at around, call it, $29.

In my opinion, however, there's very little resistance left at $30 right now.

If silver can continue its momentum to the upside, then silver has already primed itself twice for the explosive move, so I'm looking for the next push to leave the $20s behind in short order.

Either way, if you're a willing and able holder of real, physical gold & physical silver, it should be fun to watch!

Platinum has been on a tear: 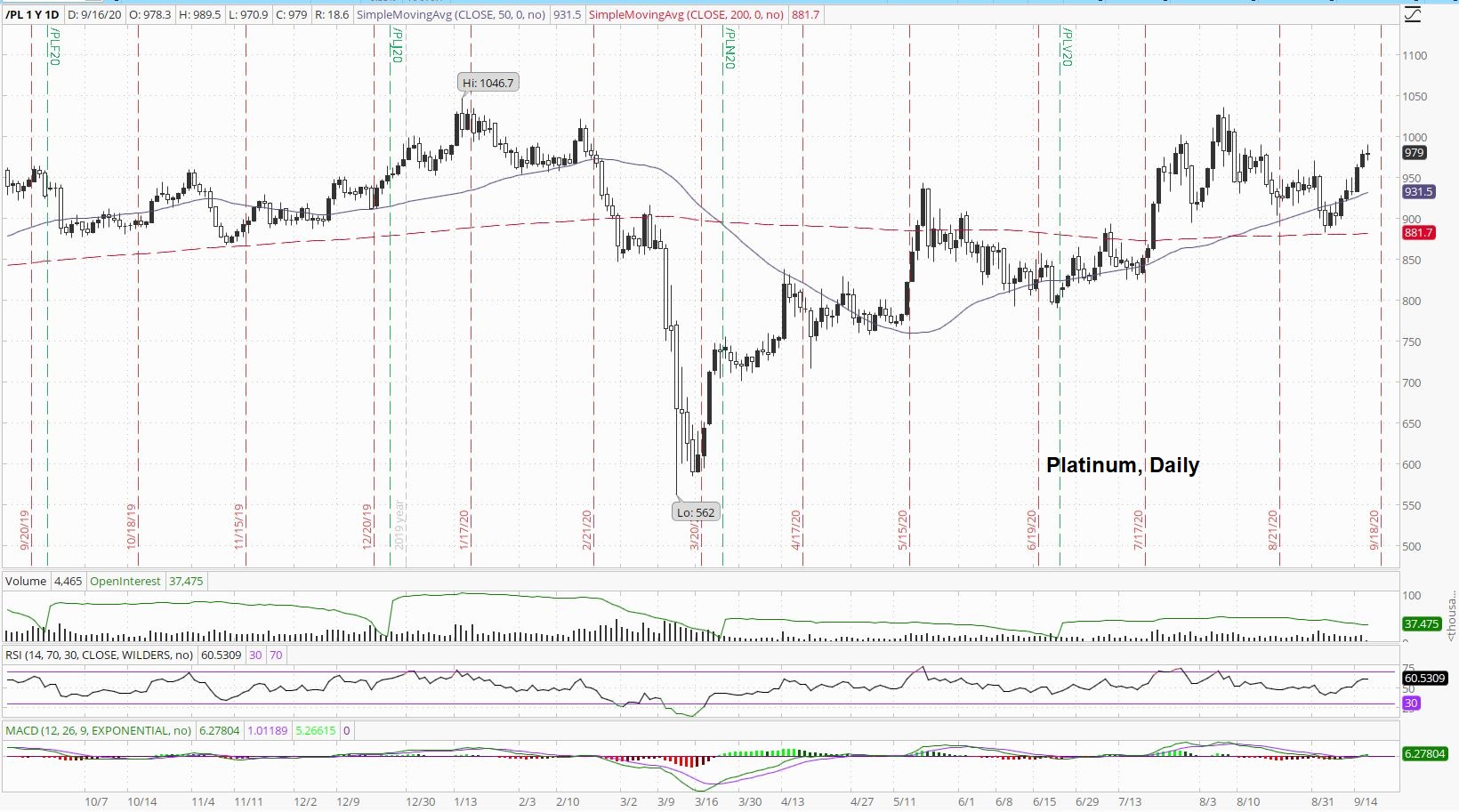 As it should, for platinum meets all of the requirements for honest money, every day of the week, and right now, honest money is in demand.

Palladium has also surged, breaking out above $2400: 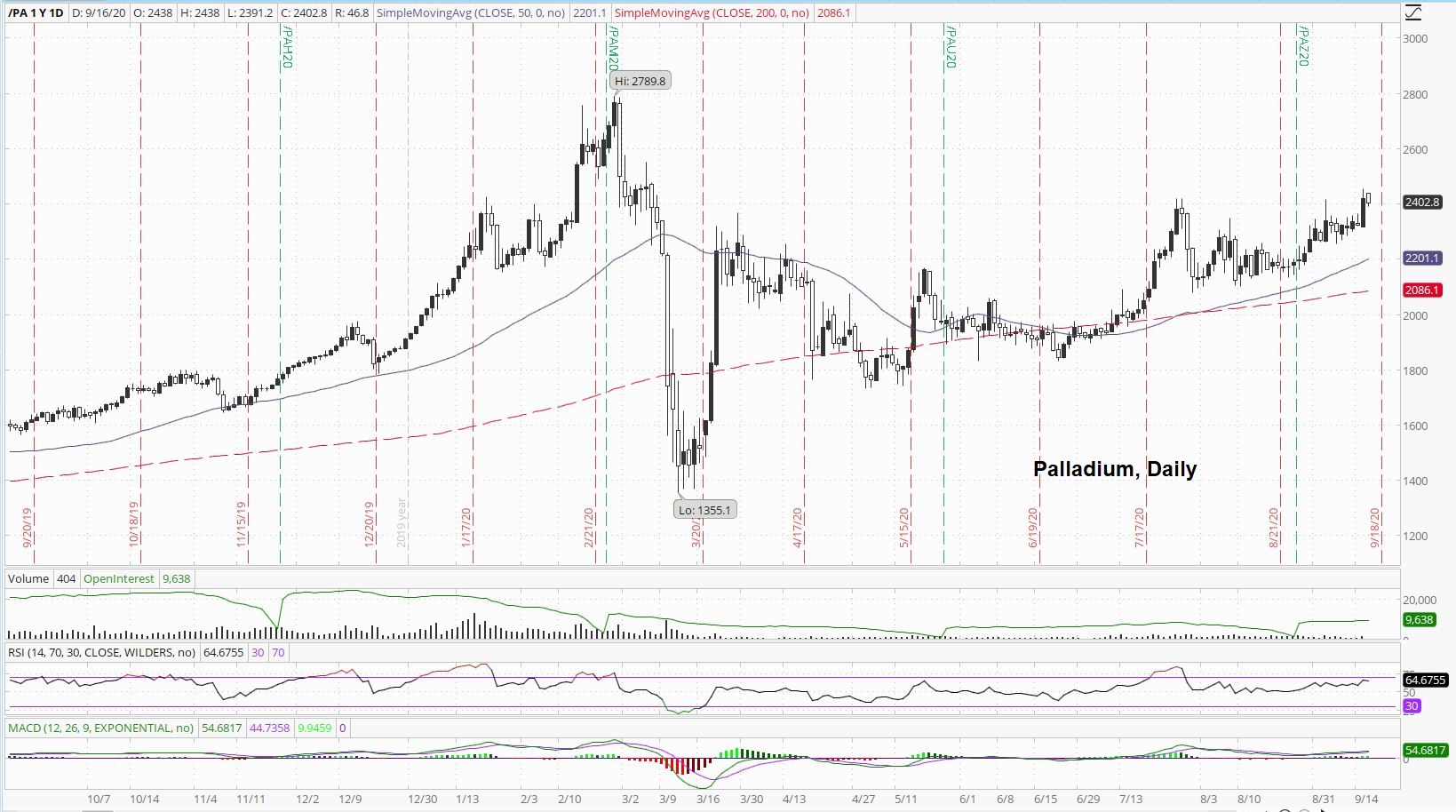 Funny how that works out, isn't it?

That said, I'm not expecting palladium to catch a big-time "flight to safety" bid until the other precious metals reach parity and move beyond palladium.

Copper may not be money, but it is currency and honest currency at that: 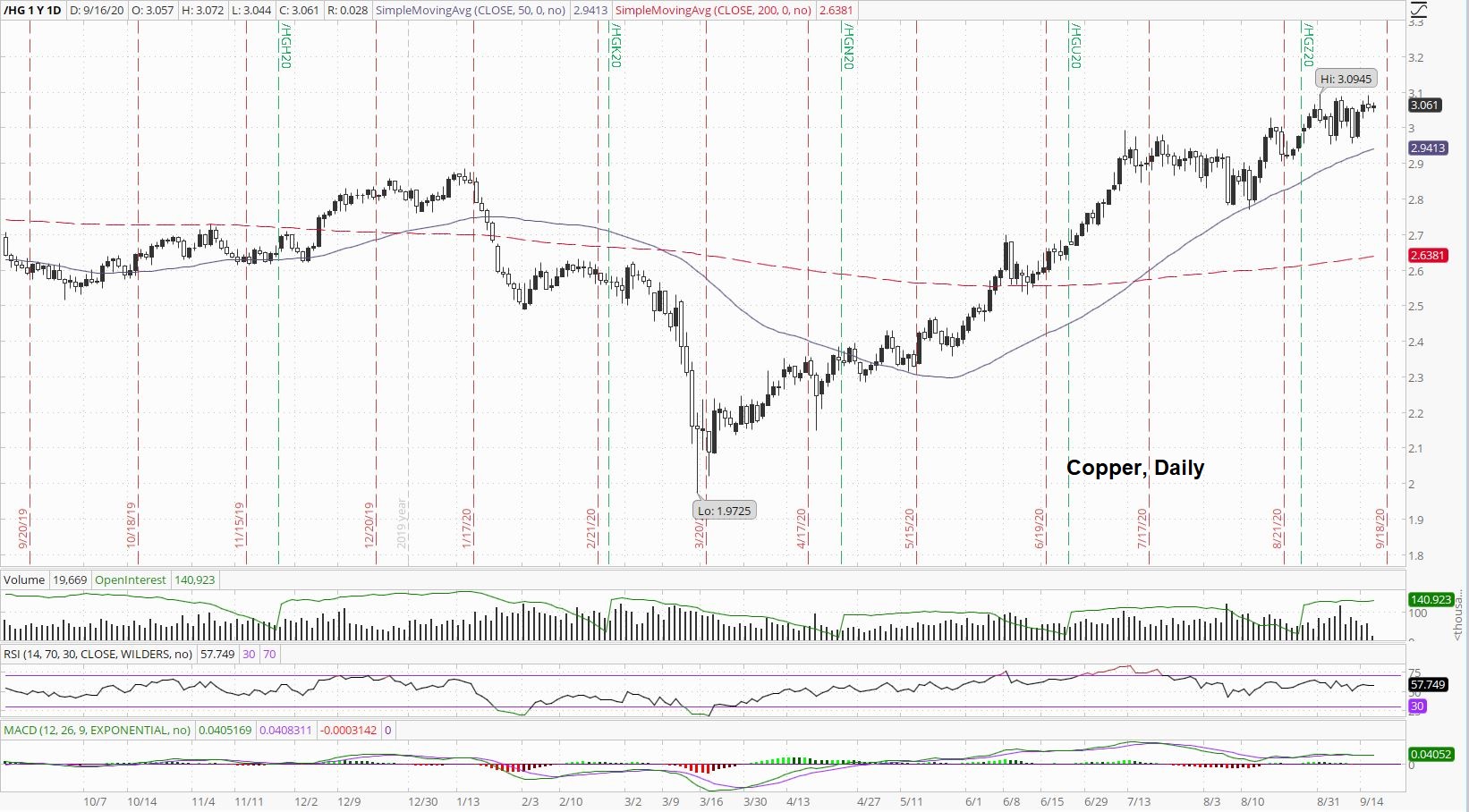 Back in the day, one could exchange their copper pennies for silver dimes, or silver quarters, or $5 Gold Eagles, or whatever!

That's roughly what would be equivalent to a modern-day 1/10th American Gold Eagle.

Crude oil has begun its decline that most analysts, myself included, have been looking for: 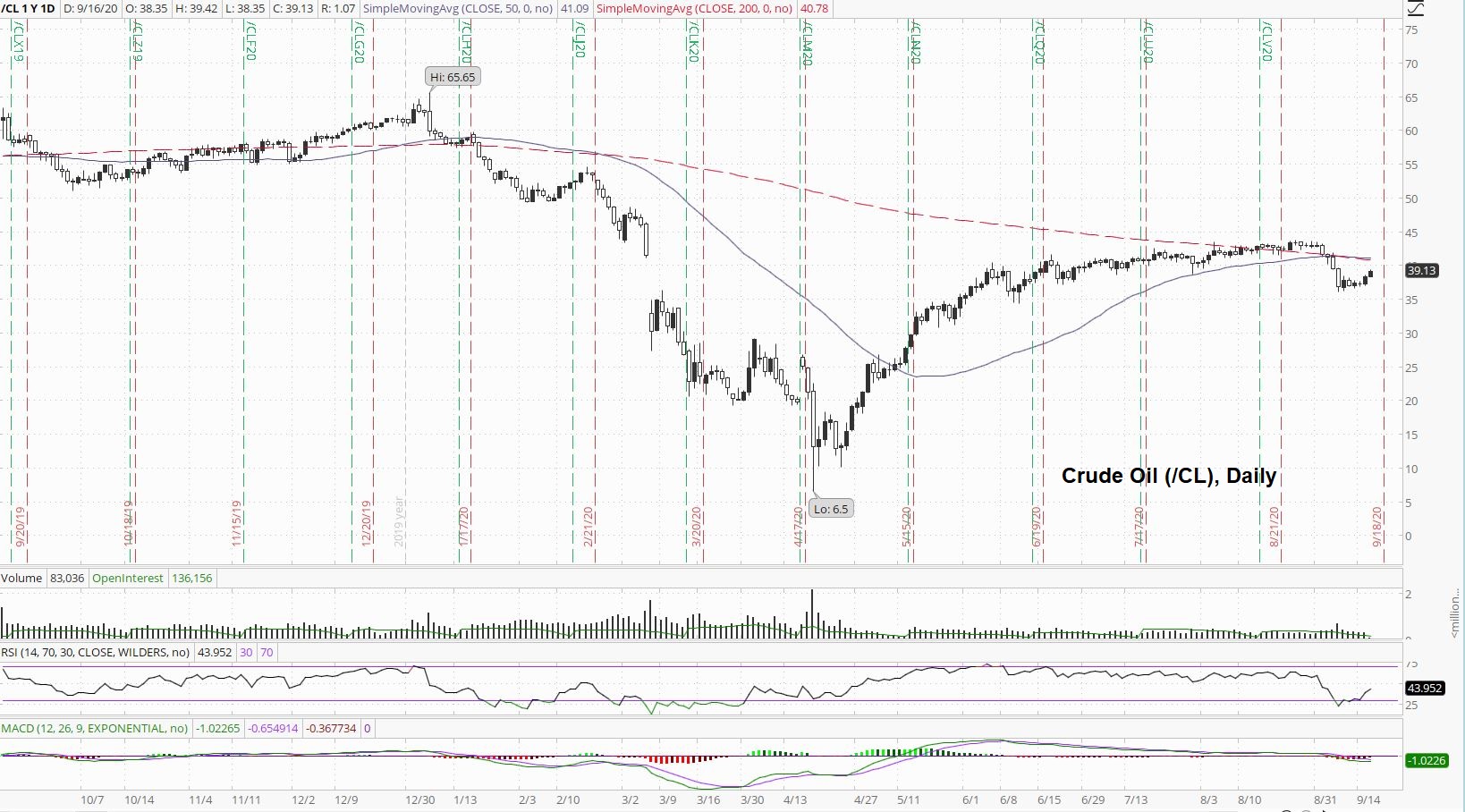 Crude oil is quite the wildcard right now with copper signaling commodities price inflation is here and the real-world signaling there is only so much oil that can be consumed and stored.

For all the talk about a crashing stock market, the Dow is only down a little more than 3.0% from its recent 29,000 peak: 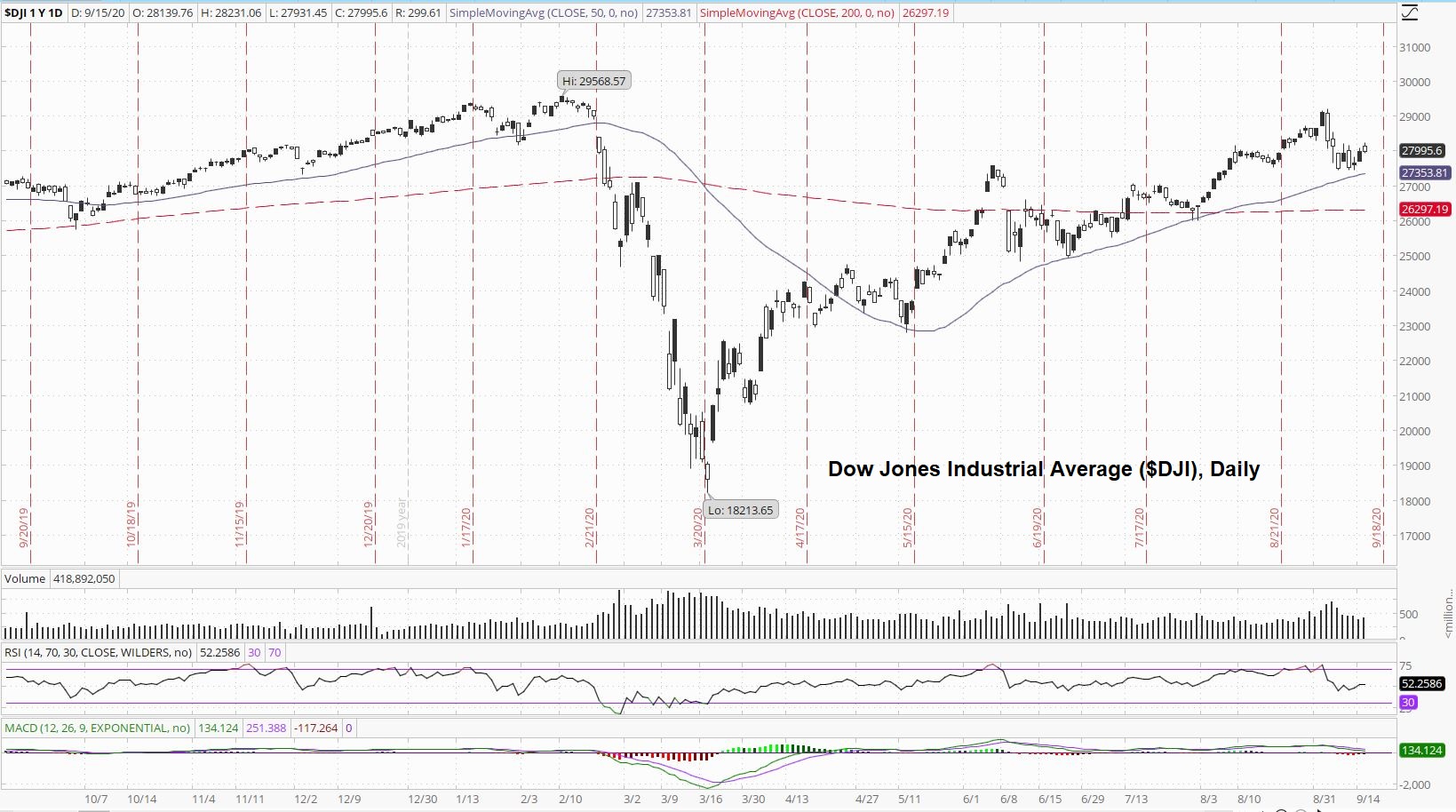 It will be interesting to hear Fed Chair Powell's thoughts on the stock market later today.

Fear has more or less subsided: 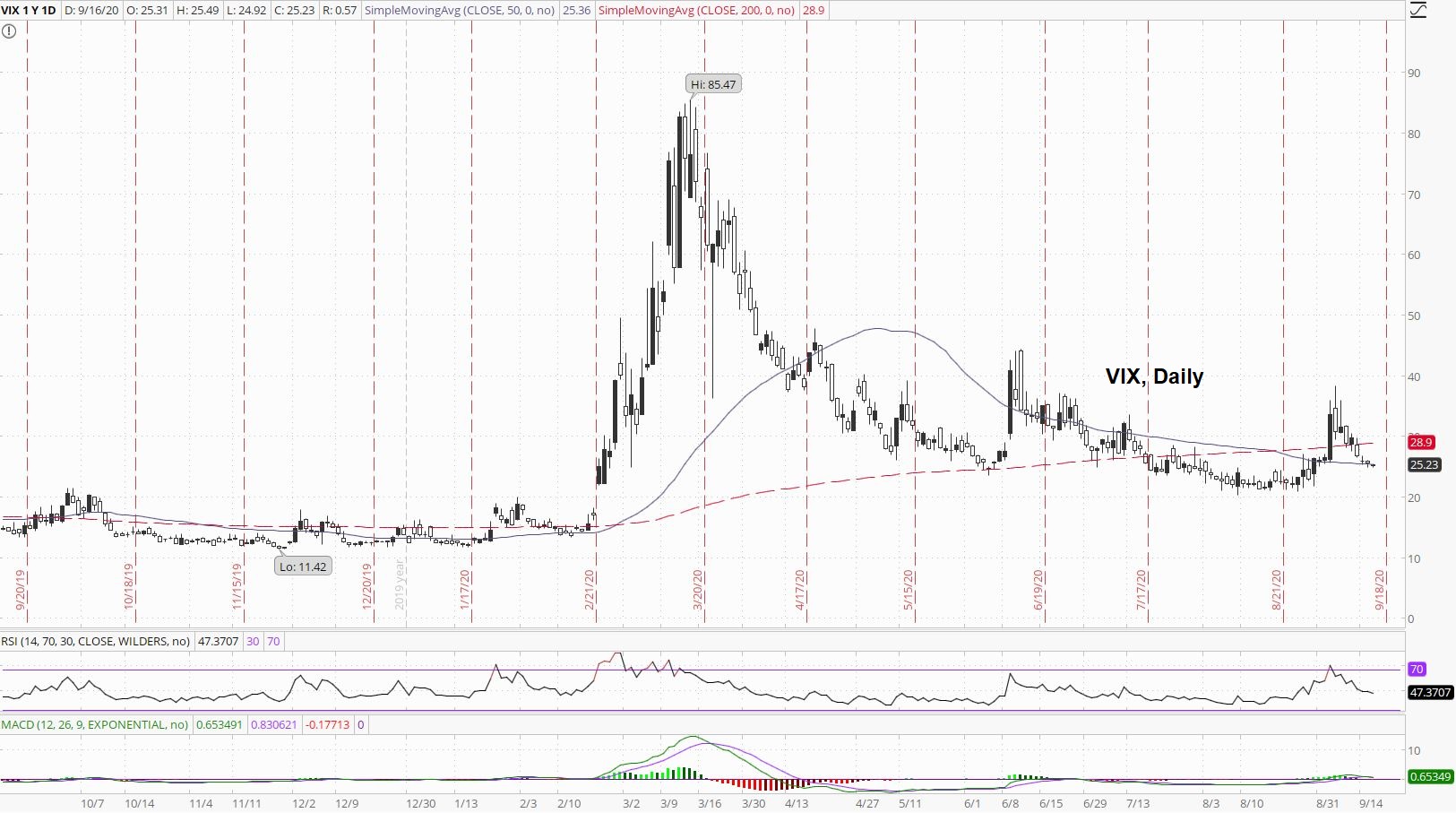 With market participants fully expecting what the Fed is going to do, and not do, however, why would fear not to subside?

The yield on the 10-Year Note is barely moving: 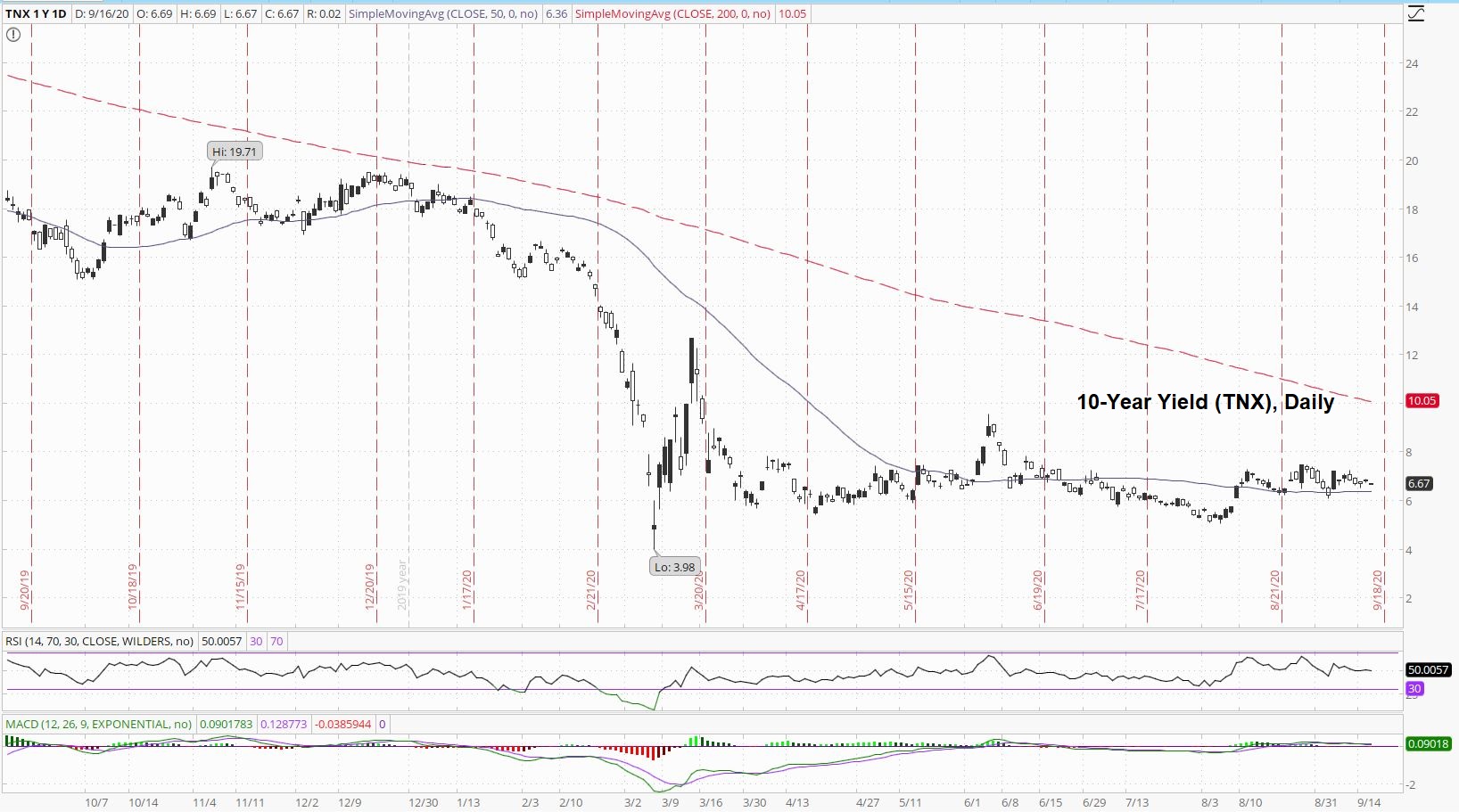 As yield stays between 0.6% to 0.7% and inflation picks up, real yields will become deeply negative, even if the nominal interest rate shown on the chart is positive, and as that dynamic plays out, there is really only one hedge: Gold & Silver.

Platinum and palladium can be a hedge too, but since I'm American and it's Gold & Silver specifically named in the US Constitution, I'm naturally biased like that!

Finally, a lot of analysts are looking for the US dollar to rally here: 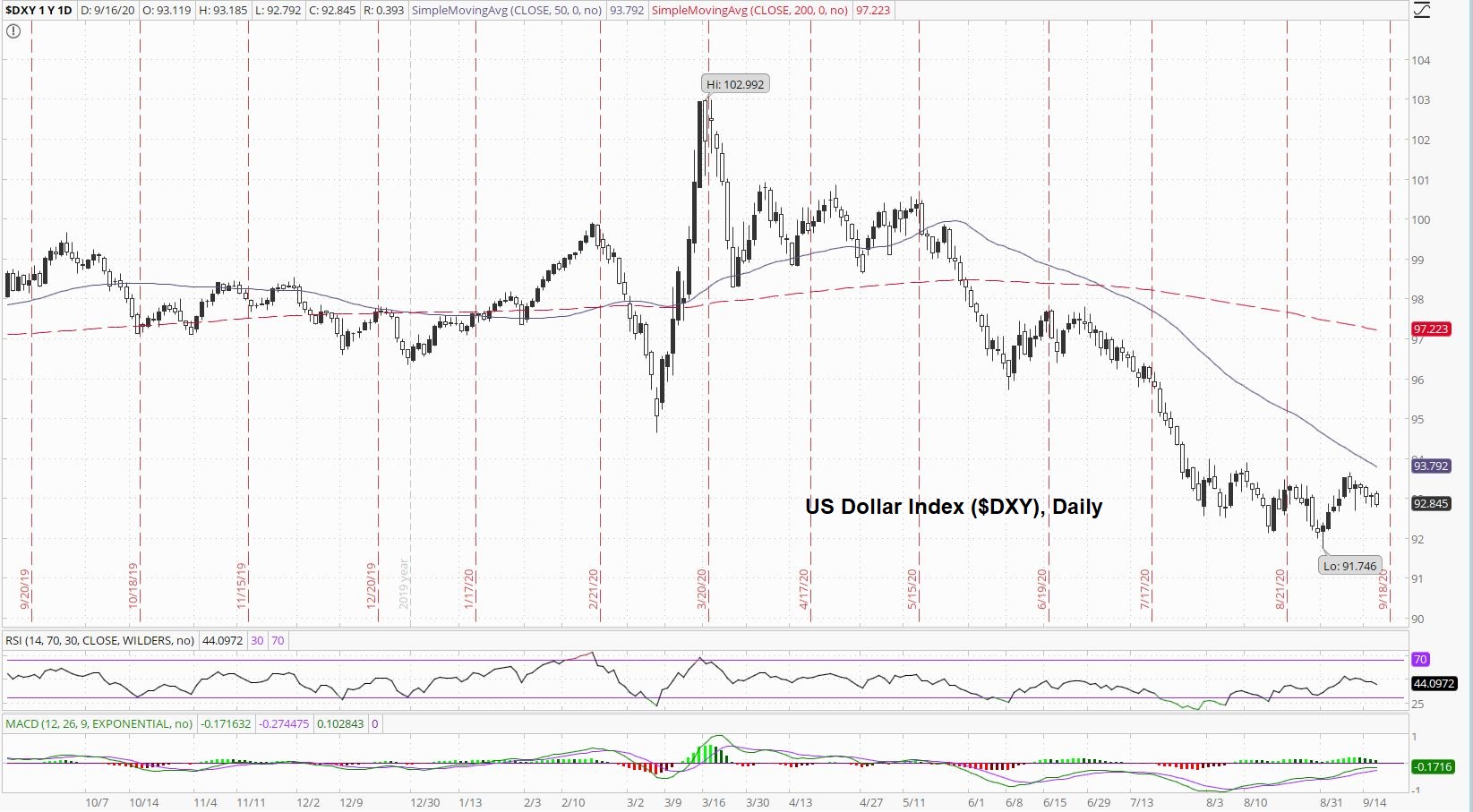