These days online, it is pretty commonplace to see negative name-calling instead of polite well-considered discussions.

Some of the alternative financial media's most naysaid targets are often those receiving the most attention. Much of the highest levels of vitriol get reserved for those few who make compelling arguments against a passionate group’s biases or even delusions of financial market grandeur. Many engage in this needling of group thinkers to gain further attention.

Enter best-selling financial author, James G. Rickards. Perhaps one of the modern gold market's most well-studied and well-spoken proponents. One who does an excellent job of boiling down the complex with helpful metaphors.

Over the last decade, dude has spread a lot of strong hot takes (i.e., often well-formed opinions) around the internet, in financial media spaces, and throughout the many pages of his best selling books.

This post-9/11 ‘was not an inside job’ CIA analyst, often too drops ‘bitcoin is a scam’ opinions which drive respectively passionate ‘inside job’ theorists and crypto ‘holdrs’ to lob respective disparagements for the whole world who bothers to look. Perhaps some of his critics are partially correct.

This James G. Rickards self-reportedly lost a considerable portion of his net worth while also acting as general counsel for a hedge fund that almost brought down the entire global economy in 1998. That sounds like some pretty damn incompetent decision making. But he who makes no mistakes when investing their own income, throw the first stone.

Surely critics who doubt James Rickards’ best selling books and his continued consistent warnings about another larger than 2008 financial crisis. They should also ignore all the following points he makes illustrating why this historically overvalued US stock market currently is dangerous to be fully allocated in.

We intentionally embedded the video above to begin at the 36-minute ^ mark, with Jim Rickards’ response to this “Boy Who Cried Wolf” criticism.

His razor-sharp response resonated with us and is thus the main subject of our blog post’s points here.

Rickards begins by explaining how post-1987 derivative leveraging and our further financialization of the US and the global economy have only led to financial crises that have subsequently become bigger each version in Size, SCALE, and SEVERITY (yes cap and bold puns intended).

In the specific chart below, focus in on the 2001 and 2007 stock market crash versus spot gold price derivative performance. Gold bullion did its safe haven job. 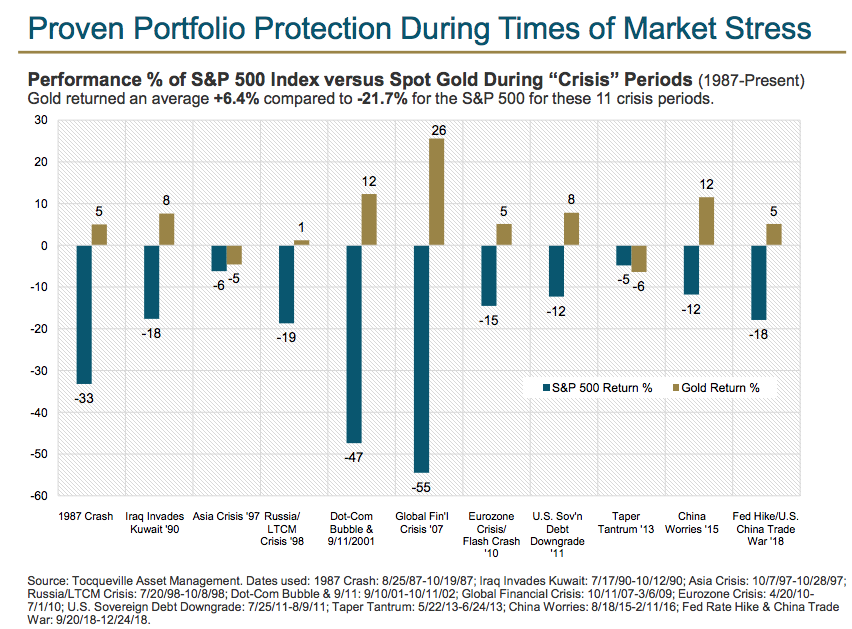 The specific Global Financial Crisis which began in 2007 and basically for gold stretched into late 2011. The runaway of the gold price in the chart above measures the then crashing stock market (peak to trough 2007-2009) data.

It does not take into account additional physical gold bullion premiums which peaked in late 2008 around +25% above the then spot price for the world’s most often, perhaps best gold bullion coin to buy. In other words, the spot gold price may have fallen to around and even briefly below $800 oz in late 2008. Still, resultant financial fears bid physical 1 oz Gold Eagle Coins to safety haven price of approximately $1,000 an ounce as then reflected by available market data. There were days in the fall of 2008 when bullion dealers had nothing to sell. Bullion dealers online who could not get even backorder from bullion mints for their wanting to buy would-be bullion customers even.

So we digress to now almost the year 2020 with this supposed alleged CIA shill in question. Mr. Jim Rickards merely posits post-1987 to 2008 financial market crash facts. Then retorts with some simple questions for all to think through.

Like who listening, watching, or reading wants to bet recessions and financial market crashes have gotten repealed into obsolescence? Will Janet Yellen bail you out if you are wrong?

Why do you think once record silver buying Warren Buffett's Berkshire Hathaway is now in late 2019, sitting on over $120 billion fiat US dollar cash? That is an amount equivalent to nearly 60% of its public portfolio of stocks owned, in other words $120 billion in cash and about $200 billion still sitting in US stocks mainly.

Of course, billionaire Buffett and Berkshire are waiting to deploy this cash to buy discounted devalued stocks both during and into the next recession and or stock market crash to come. Will there be more bank bailout sweetheart warrants for Warren ahead?

Rickards reverses the thinking for all fully invested stock market bulls by asking, “Do you want to bet your net worth, your retirement, and your family’s net worth that (financial crisis) will never happen again?”

If not, maybe invest in some alternative asset classes that should and have performed well through past stock crashes and financial crises. Maybe look at some of the lasting investment methods that dynastic old European and Asian wealthy families use to come hell or high water somehow, endure rich through millennia.

Often naysayers and onlookers will know Rickards or other bullion proponents are making cogent common sense points in terms of why having a long view with a prudent gold bullion position makes damn good sense, especially now.

But then, according to his metaphor in the video above, onlookers will ask this experienced mountain climber a metaphorical question like, “Hey Jim, any idea when that deformed snow-covered mountain peak is going to avalanche? I'm thinking about going up there and trying to outrace it once gravity gives way.”

In our experience, best not to wait for another financial crisis to begin securing your prudent bullion and even emergency cash positions.

If you were going to party like it’s the year 1999, or perhaps find yourself amid the US housing bubble markets of 2006, you would likely be running headlong into gold bullion knowing what you know now.

Do you think this next time is going to be much different than these last few?

Best to try and avoid experiencing more difficulties like 2008-like bullion shortages ahead. Scroll down on our 2008 gold prices and 2008 silver prices pages to see what happened with both Gold Eagle Coin +25% and Silver Eagle Coin +80% price premiums above the then spot prices, respectively).

If you do decide to wait until an acute financial crisis is again upon us, expect to encounter typical two-three months or more bullion backorders, double-digit percentage price premiums above precious metals spot prices. Premiums that those who planned and took action ahead of time undoubtedly did not have to pay nor wait for.

If by then, financial markets have not yet suffered financial spill-over events or been temporarily locked down Ice-9 frozen as Jim Rickards has often used to make metaphors.

You can tweet @ people asking them if then is time to pay exorbitantly high prices and premiums for gold and perhaps silver bullion you probably should have acquired way back when prices and demand were lower.

But when this will happen no one knows..