The correction in gold & silver continues.

The correction has been shallow in terms of price declines, given the spectacular rally, and the correction has been orderly thus far in terms of apparent support at $1900 for gold and $26 for silver. Currently, three fundamental factors are weighing slightly gold & silver, and one of them is not the US dollar, although the dollar deserves an honorable mention. With regard to the dollar index, the dollar basically stopped plunging at the end of July. Gold & silver continued to rally the entire first week of August, however, with the point being that the US dollar and gold & silver can move both dependent and independent of one another. Furthermore, recall that in last week's Midweek Market Report, two fundamental factors were explored that is wildly bullish for gold & silver investing right now.

Relations with China have been interesting, to say the least. Following the chain of events over the past year, we've gone from a Trade War to a Phase One Trade Deal to a Cold War to renewed Trade Talks. In fact, according to the BBC, the US has held "constructive trade talks" with China just this week. This is significant because of recall that pre-coronavirus, much of what was helping boost the stock market rallies had been progressing with China with regards to trade, and as such, what was "good for the stock market" and global trade was not necessarily good for gold & silver. The so-called progress reported by the BBC just yesterday was, once again, "good for the stock market" as shown in the S&P 500 chart (today's last chart). Regardless, it remains to be seen what happens next with regards to China. There is no doubt tensions have been rising with China with regards to trade, and many individual companies had been caught in the crosshairs, such as TikTok, WeChat, and Huawei. If the rising tensions are more dominant in relations with China, or if talks breakdown or even stall, then pressure on gold & silver from the "trade progress" narrative should fade.

On Sunday evening, President Trump announced an emergency authorization by the FDA for plasma treatment for some coronavirus patients. I am classifying this breakthrough as a minor factor weighing on gold & silver for two reasons. First, the stock market has been boosted whenever some sort of coronavirus progress is made, and this week, as shown in the S&P 500 chart below, we can see this is again the case. What has been "good for the stock market" with regards to coronavirus has been a slight headwind for gold & silver, but progress has been continuously made on coronavirus, yet gold & silver have rallied spectacularly? Second, according to the CDC, the number of new coronavirus cases has been on the decline for weeks. Combine a decline in coronavirus cases with increased treatments, both in use and in development, and we have some positive news getting priced-in to gold & silver. This is a medical breakthrough, however, and coronavirus progress does not, on their own, mean a market breakthrough or economic breakthrough, both of which continue to sustain massive damage due to the government-imposed shutdowns, public fear, and more.

Once a year the Fed meets at Jackson Hole, Wyoming, for a conference with other central bankers and economic big wigs. This year, however, the annual meeting is virtual. None the less, the hype and anticipation in the mainstream financial press is astounding. In fact, CNBC is reporting on Fed Chair Powell giving a "profoundly consequential speech" on Thursday, which means the markets will move in response to Powell's words. I am classifying this year's Jackson Hole conference as a minor fundamental factor weighing on gold & silver because the crux of the profoundly influential speech is apparently a change in how the Fed views inflation, and by that, we can only conclude the Fed wants more of it, and they may even be prepared to do more active interventions to hit their so-called inflation objectives. If market participants catch a strong whiff of inflation on Thursday, the next leg-up could begin as early as tomorrow as gold & silver become the "buy the news" inflation hedge of choice, and, in the most bullish of cases, the next leg-up could even begin today if participants begin to feel a little bit of "buy the rumor" in addition to the "buy the news".

For now, as has been the case for over a week, gold and silver have barely moved against one another: 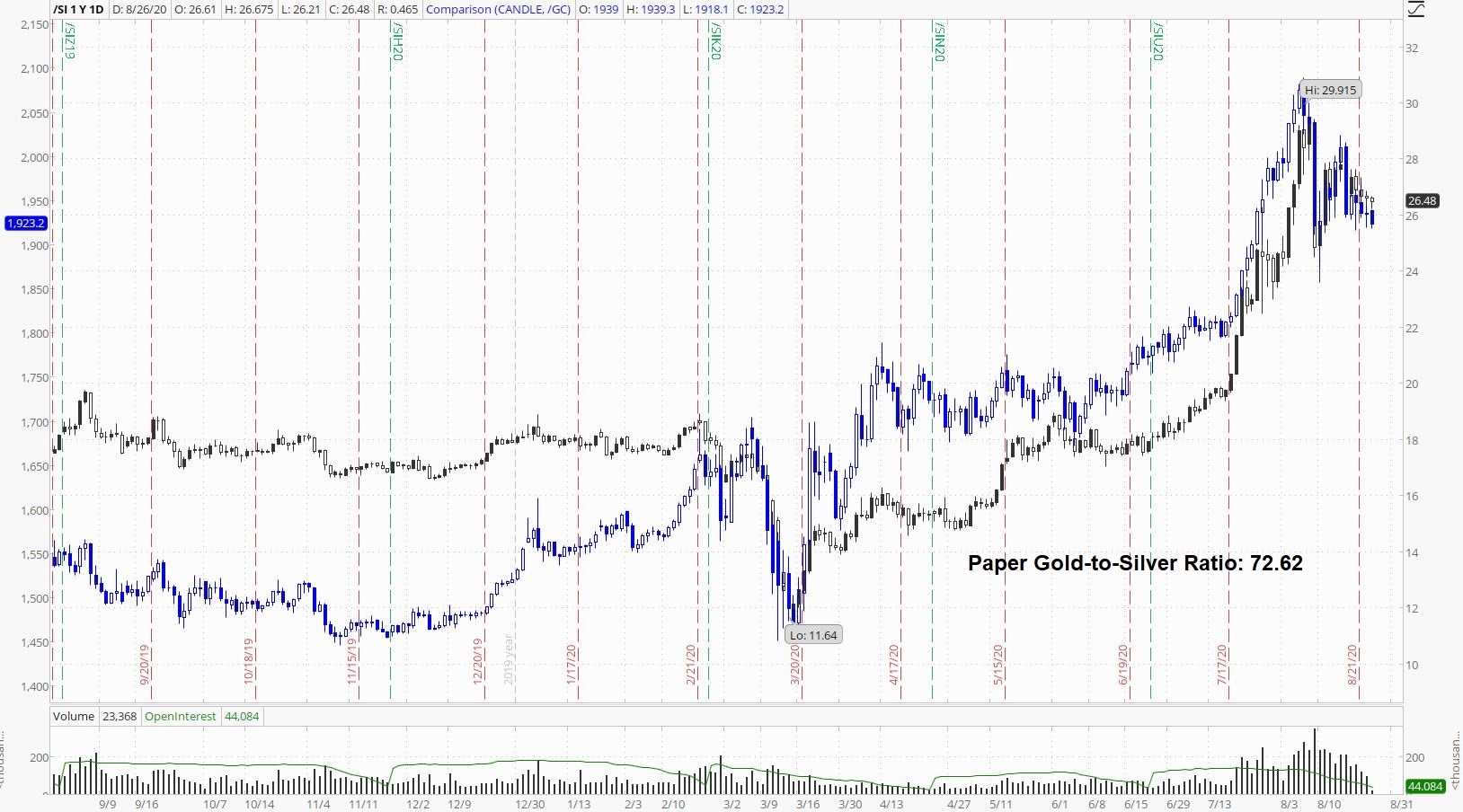 Calculating the paper gold-to-silver ratio with a 72-handle for over a week is one confirmation that the current correction is now more over time than over price.

Gold has been finding nice support above $1900: 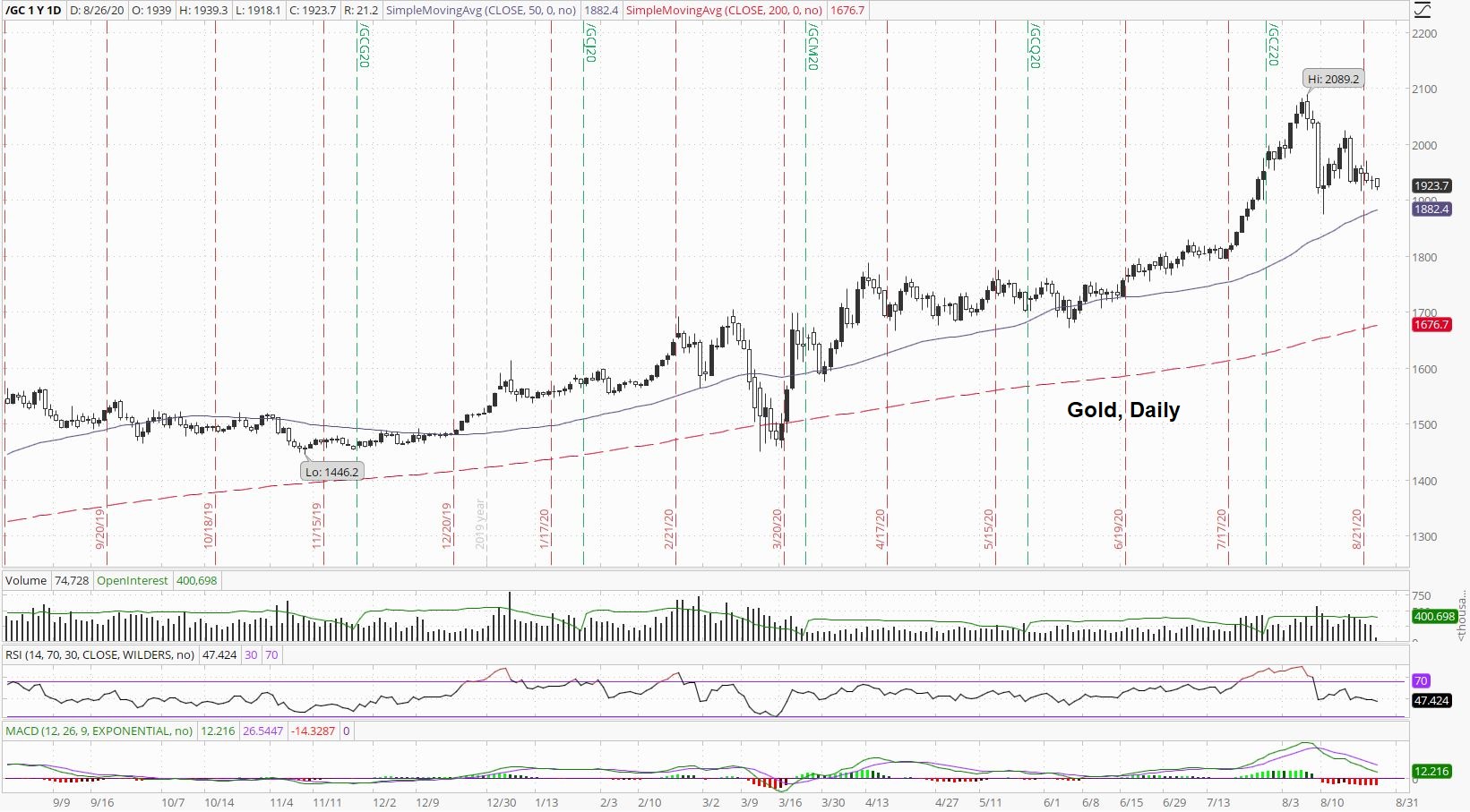 The trend is yet to be "short-term bearish", however, as one lower-high does not make a trend.

Silver has been finding support above $26: 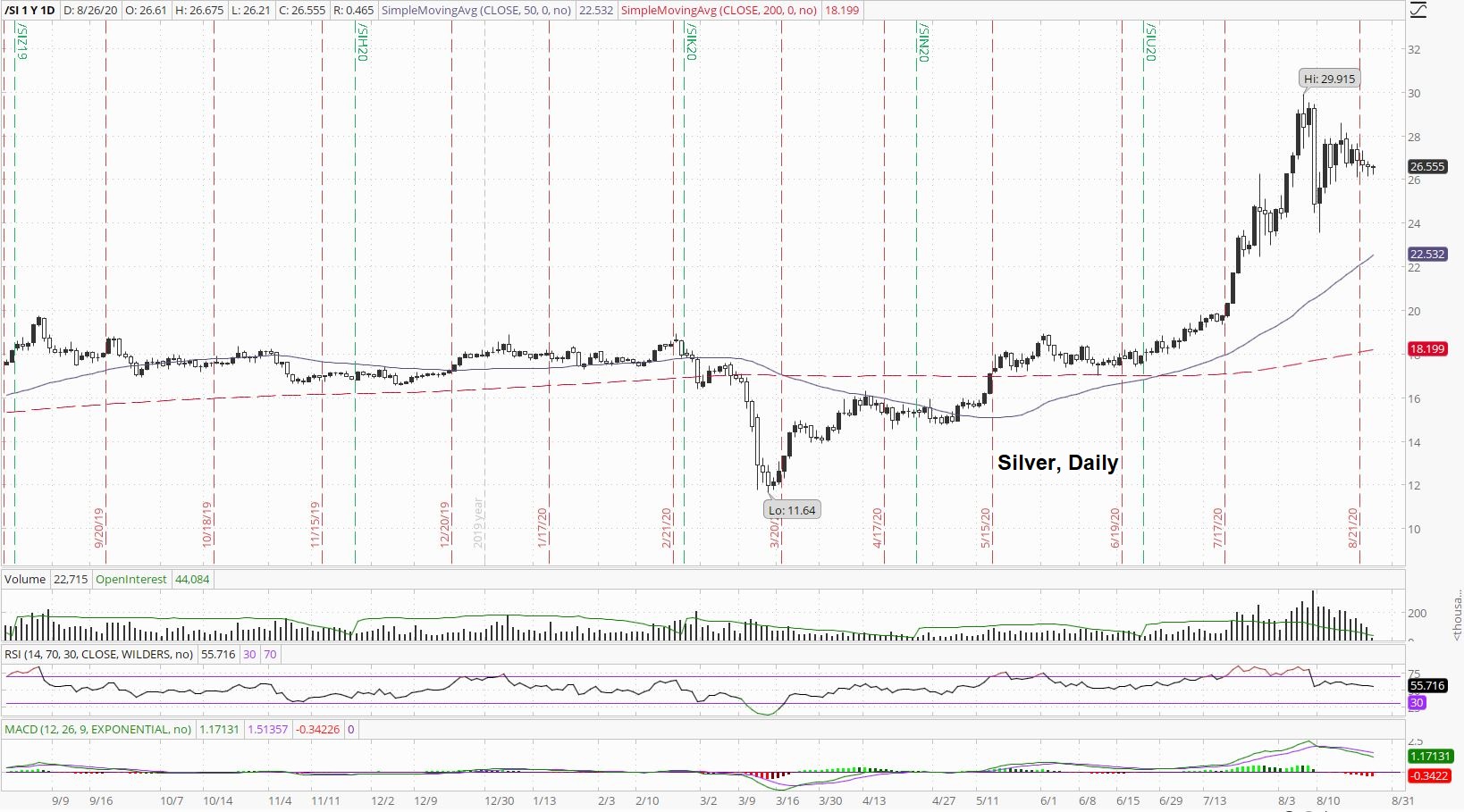 It should be noted that silver continued to rally at the start of the second week in August even after gold stopped moving higher in the first week, and silver then plummeted more than gold on the "correction".

Those two moves are in line with the general dynamics of the market where silver outperforms gold both to the upside and to the downside.

Palladium continues to straddle either side of $2200: 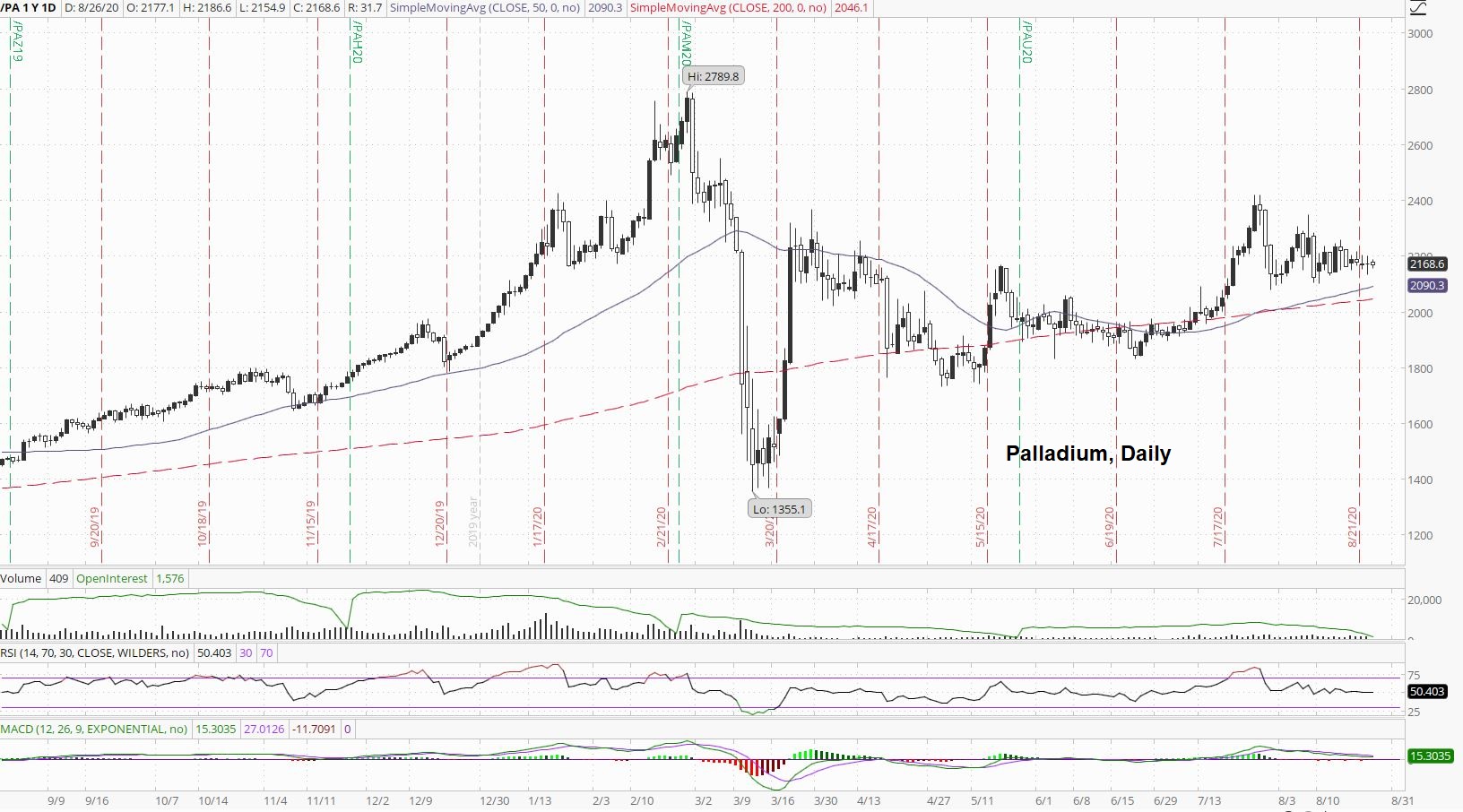 Of late, however, palladium has been struggling to maintain above the psychologically important whole number. 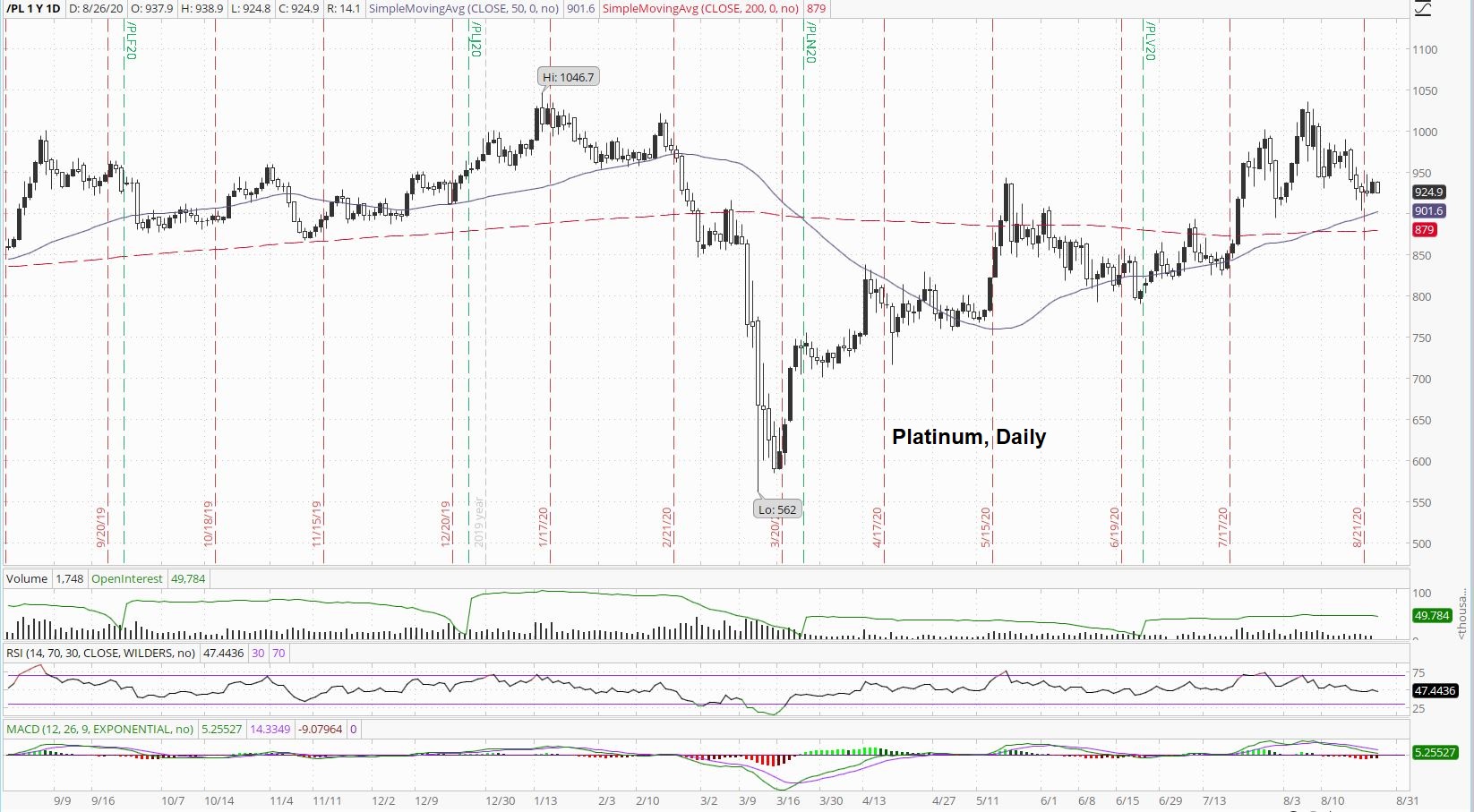 Especially now that platinum is even deeper in the negative, year-to-date, by nearly -0.6%.

Copper has been looking strong of late: 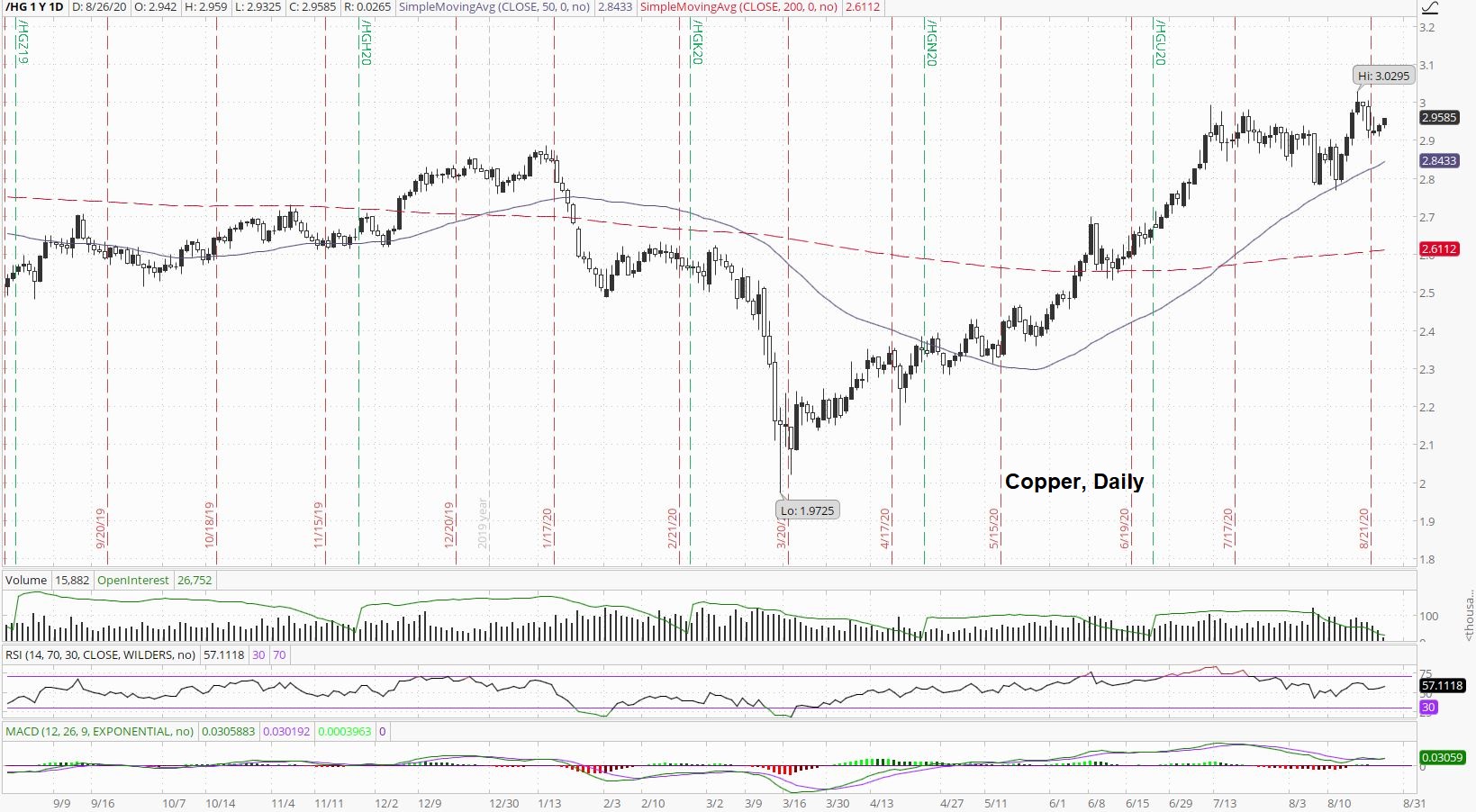 We've breached $3.00, and $2.80 to $2.90 has shown to be strong support, and that range also looks like base-building in preparation for the next attempt at a break-out above three bucks.

Crude oil will be interesting to watch over the next week: 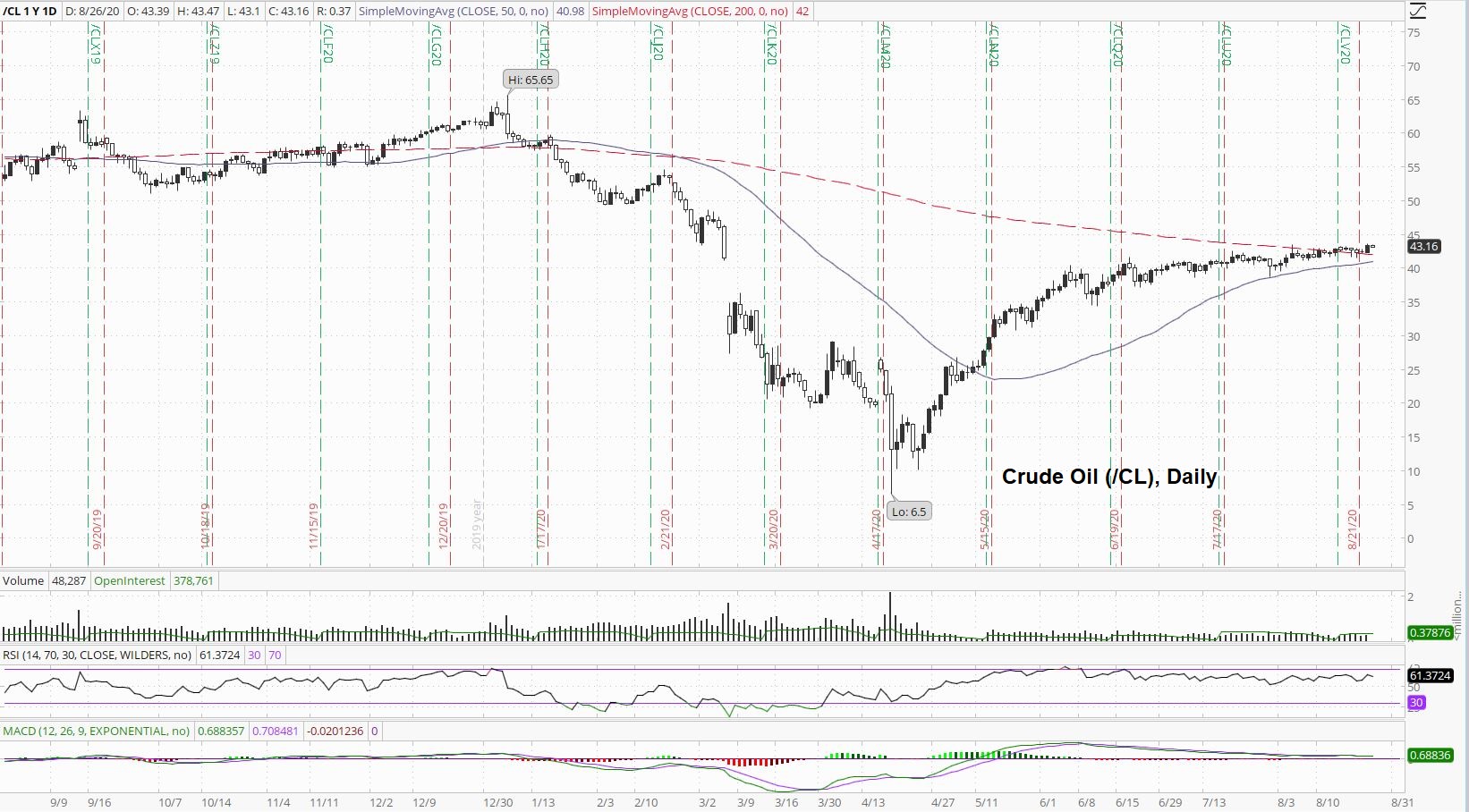 Many analysts are looking for prices to be supported hereafter somewhat of a fear premium with the ISIS attack on a major Syrian oil pipeline first, and now, more than half of oil rig operations in the Gulf of Mexico have been shuttered due to hurricane activity.

The yield on the 10-Year Note has ticked higher: 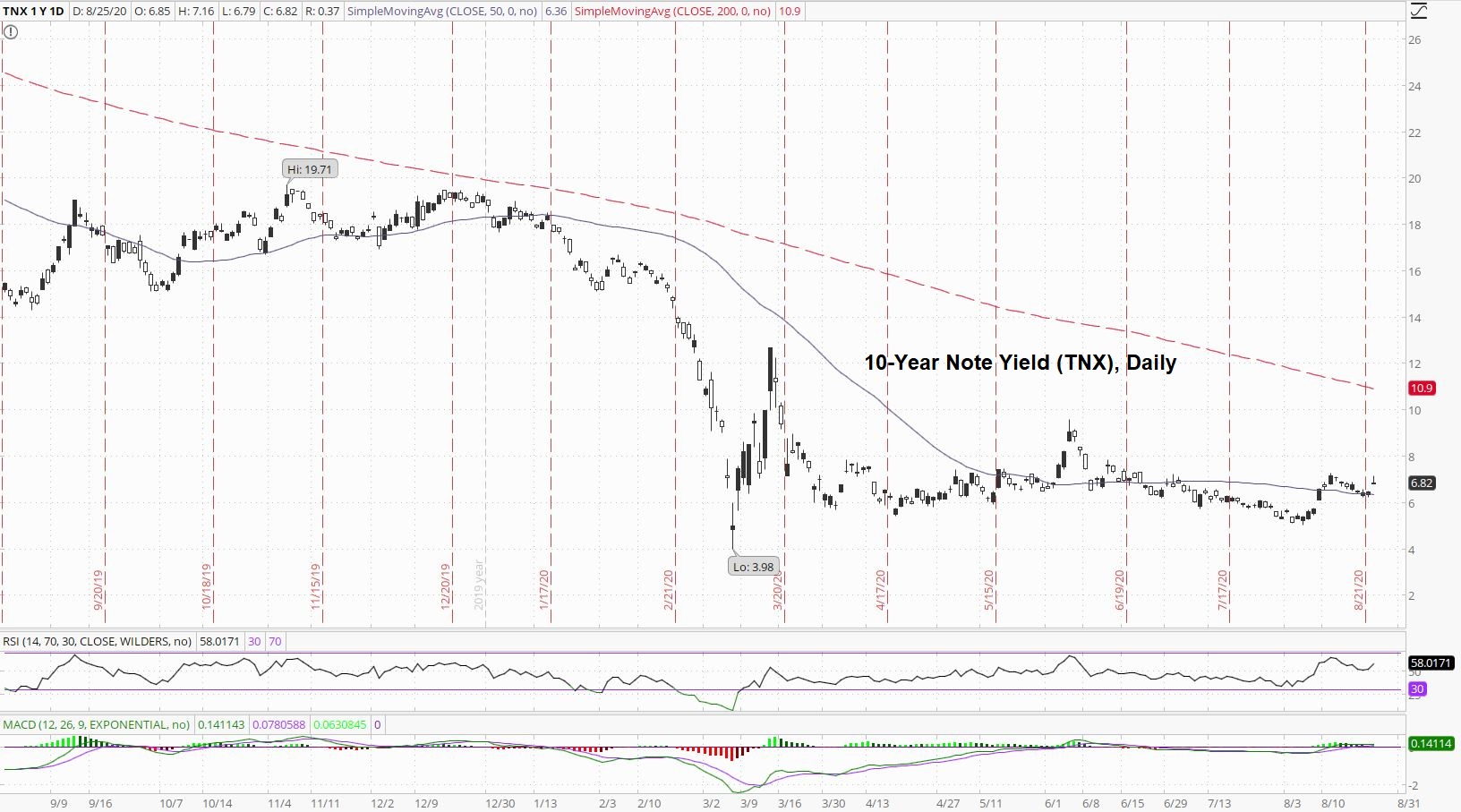 The US dollar index appears to be dead-cat-bouncing: 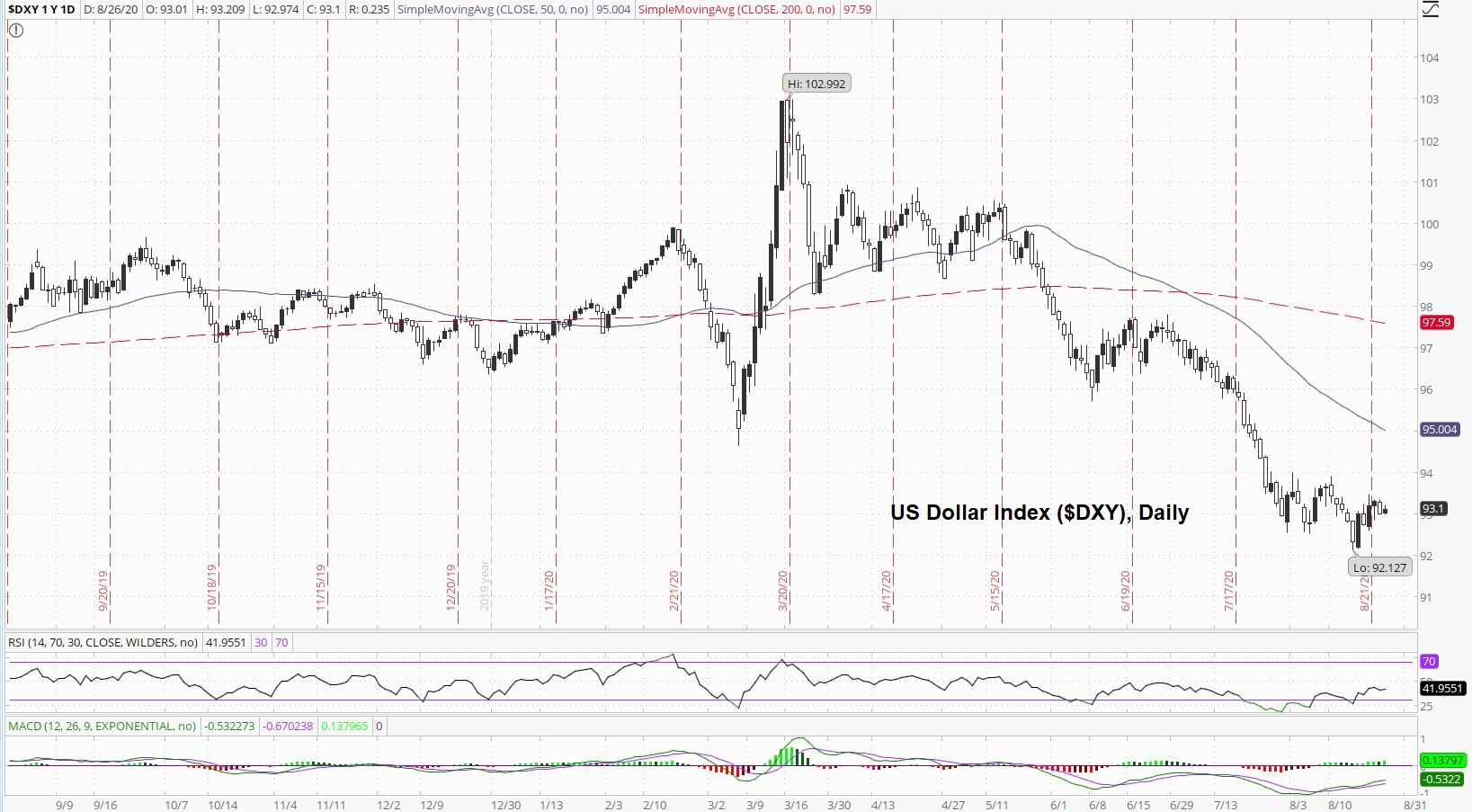 If the index is not bottom-bouncing but indeed dead-cat-bouncing, then the bottom is about ready to fall out.

Civil unrest may be increasing again on Main Street, but fear is still on the decline on Wall Street: 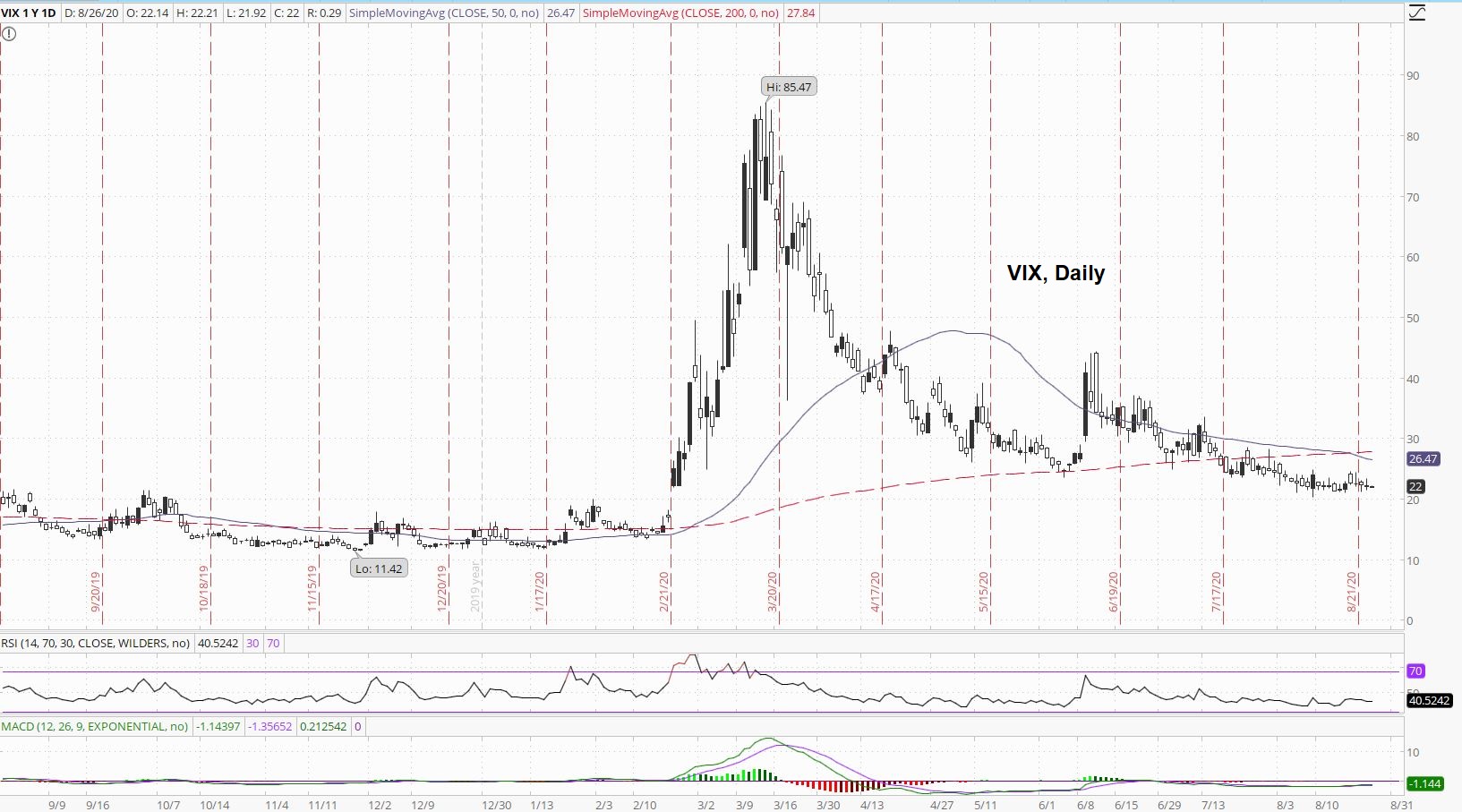 When market participants think the stock market can only ever go up, however, this is to be expected.

The stock market has been relentless in its push to new all-time record highs: 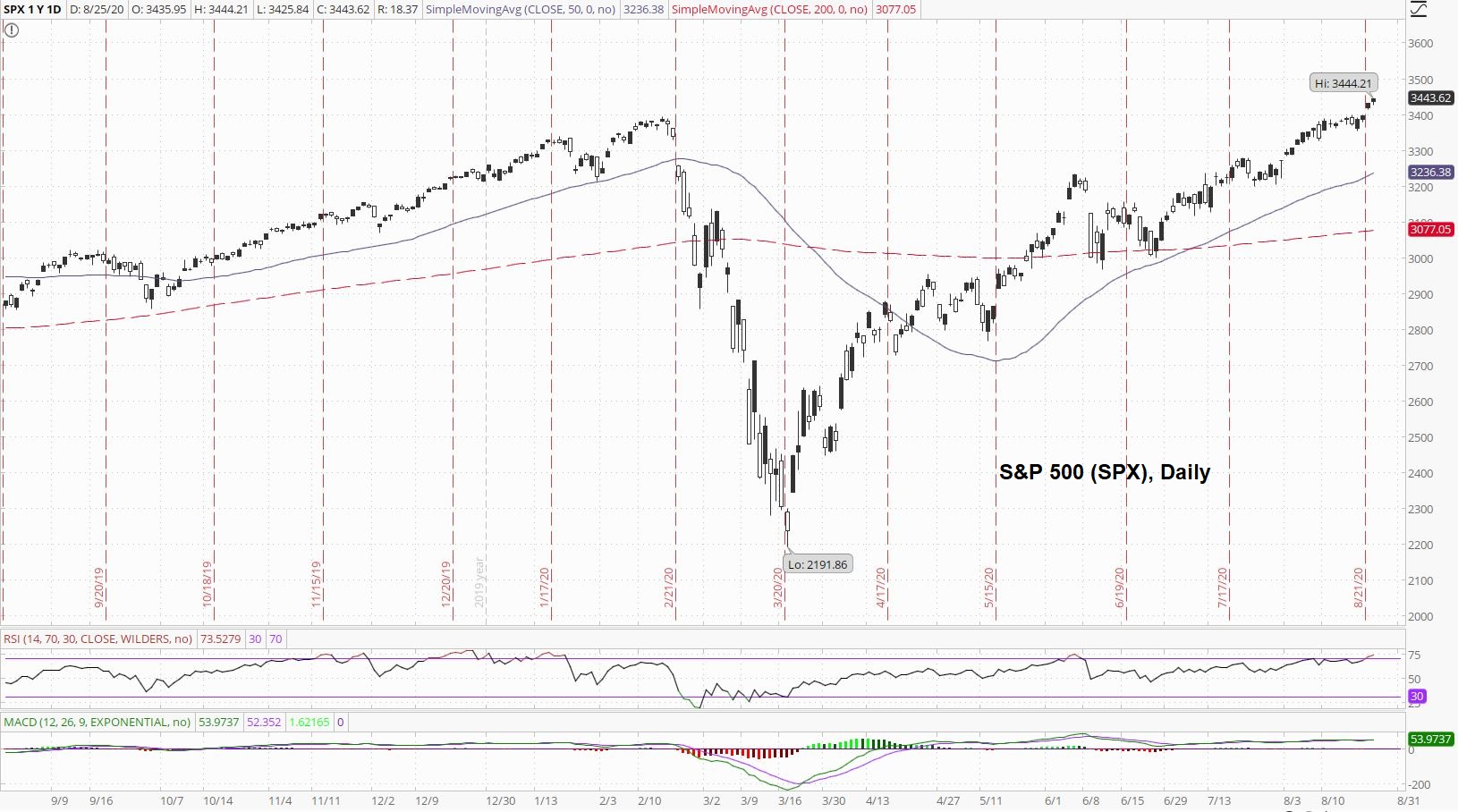 Now that the S&P 500 has confirmed the NASDAQ's all-time record highs, does this mean the bear market in stocks is actually over?