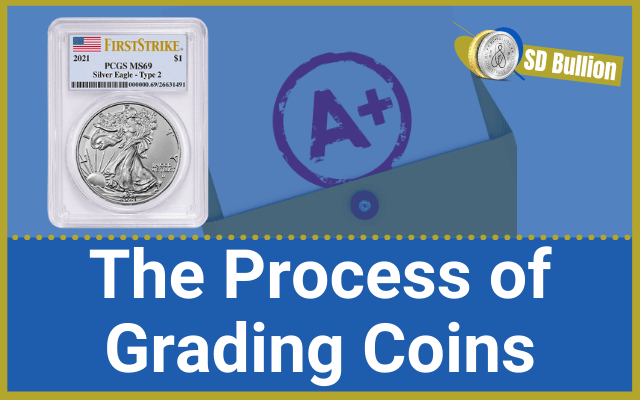 How to Get a Coin Graded?

Have you ever wondered how much your old coins are worth? Or how rare they are? Maybe you’ve come across a few gold coins or silver coins and you are considering selling them for some extra money. Or you've got a few collectible coins that you would like to sell or just get a sense of their value. We have prepared a comprehensive article that can help you address those questions. Keep reading to find out more.

What Is Coin Grading?

Coin grading is a kind of service provided by expert numismatic corporations. They assess the quality of a coin and evaluate its physical condition. This evaluation results in giving the coin a “grade” according to a scale that can range from Poor (very worn or even badly corroded coins) to Brilliant Uncirculated (in perfect mint condition).

Coin grading is sometimes referred to as third-party grading. It is an essential service in the numismatic world. It provides an unbiased value for the coins. It helps collectors get a real assessment of how much their collection is worth and is there to guarantee no parties will be wronged in a transaction.

Note that having your coin graded doesn’t necessarily increase its value. Rather, it ensures a fair market value for the collectible, where there could be doubt if, otherwise, the coin hadn’t been graded.

Many would also argue that it is easier to sell a coin that has been graded than one that has not.

The History of Coin Grading

In the early 1900s, as rare coin collecting became more popular, the numismatic community started to grow. And, as it is today, the scarcity and the condition of the coin were paramount to define its value. With time, the need for grading standards started to arise.

Soon, numismatists and coin dealers started using a few terms to characterize the coin’s condition: Good (a coin with wear marks, but most of the design details intact), Fine (a coin with light wear, some mint luster, and clear design details) and Uncirculated (a coin in mint state condition that had never been in general circulation).

However, soon some questions started to arise. It became pretty noticeable that some “Fine” coins, for instance, looked better than others from the same grade. Soon, terms like “Very Good” and “Very Fine” were being used as well, as collectors and coin dealers sought better prices for their items.

But was it fair to have the coin’s condition determined by the very same people trading them? Were they being impartial in the evaluation?

Over a decade later, in 1985, the PCGS (Professional Coin Grading Service) started operating in California. Meanwhile, the NGC (Numismatic Guaranty Corporation) opened its doors in 1987 in Florida.

While other companies have provided similar services since then, many are out of business. The three mentioned above are, by far, the most notable and trusted coin grading services at the moment. Together, they have certified close to 100 million coins.

You want your coins to be graded by real numismatic experts. That way you ensure that your coin will be evaluated by an unbiased third party that will give you the most accurate grade for your coin.

As we have mentioned above, there are a few companies that have proven themselves to be the most credible source for coin grading. Let’s take a look at those who are considered the most popular ones among collectors and investors.

The PCGS has been operating since 1985. The company was founded by David Hall, along with other leading numismatists. Estimates suggest that they have graded over 40 million coins since then. PCGS was a pioneer in protecting the appraised coins in tamper-evident capsules in order to further guarantee their grading. The company is based in Newport Beach, CA, but also has branches in Europe and Asia. PCGS is part of the Collectors Universe Inc.

The NGC, based in Sarasota, FL, started providing its services in 1987. According to their website, they have graded over 50 million coins from the US and from around the world, from nearly all past and present countries. Currently, the NGC is the official grading service of the ANA (American Numismatic Association).

The ANACS was founded in 1972 as part of the American Numismatic Association. At the time, coin collecting was taking the country by storm and many counterfeits were flooding the markets. As con artists tried to take advantage of the growing popularity of the hobby, ANA’s board of governors decided to address this issue with the creation of the Certification Service. At first, the ANACS would only identify the coin as genuine or not and return it with a certificate of authenticity, but not encapsulated. It was only in 1979 that the company started actually grading the coins. The ANACS has been sold several times since its inauguration. Currently, the company is owned by EKW, LLC and is located in Englewood, Colorado.

The Grading Process and how it Works

The grading process may vary slightly from one corporation to another, but the basic premise remains the same. Please refer to each grading service company website for specific instructions.

The grading process starts off with the coin submission by its owner. Each company requires the owner to fill out some forms with information about the coins (quantity, date, mintmark, denomination, etc), the return shipping address, the method of payment, and others. Then, the owner should prepare the coins for shipping by housing each one individually on plastic flips.

Once the coins arrive at the office, they undergo an identification process. This is usually a simple process of checking the coins and making sure the content of the package matches the quantity and the description of the submission invoice. Then, the coins are entered into the company’s database and barcoded. Next, they are usually stored in a vault until ready for the actual grading.

When the coin graders are ready for them, the coins are taken from the vault into the grading room. Usually, the coins are graded separately by, at least, two coin graders. Coins are carefully examined and compared to published references to determine which variety it qualifies. The owner of the coins remains anonymous throughout this process to guarantee the grading is impartial.

After grading, usually, another department encapsulates the coins and labels them with all grading descriptions and data. Coins are placed inside a plastic core piece within a transparent holder.

Finally, the coins are shipped back to the owner using the address indicated in the submission form. As a matter of fact, most companies return the coins to the grading department before shipping for a final inspection, making sure the label matches the actual grade for the coin.

All grading companies nowadays use this grading scale as a universal grading standard. Dr. William H. Sheldon invented this system in 1949. It revolves around a 70-point scale to assess the coin’s condition. The idea is that a coin graded 70 is 70 times more expensive than a coin graded 1, so on and so forth.

Nowadays the numerical Sheldon scale is accompanied by an abbreviation indicating the coin’s condition. For business strikes, the terms can range from PO (Poor) to MS (Mint State). PR is an indication that the coin is a Proof, and SP means Specimen (early examples of proof coins). Look at the chart below for a more detailed description:

What Is Involved In Coin Grading?

Overall, grading a coin involves identifying the coin’s type, variety, denomination, mint year, mint mark (if existent), possible mint errors and the condition of the edges, surface preservation, and the design devices. It also involves authenticating if the coin is genuine or not. It’s a general identification of the coin and assessment of its condition and finally encapsulating it on a tamper-evident holder to protect it from further handling and damage.

There are a few possible costs you should consider before submitting your coins for grading. Shipping and handling fees more notably, on top of the service fee itself. Grading prices vary according to the maximum value per coin. For instance, modern coins that are worth a maximum of $300 will cost from $17 to $22, depending on the company of your choosing. Coins with a maximum value of $10,000 can be graded for $65 to $80 dollars.

NGC’s Walkthrough service tier will grade any coins, from the US or any other country, with a maximum value of $25,000 for $175, and return your coin in a scratch-resistant holder. Beyond $25,000, the service fee is $300 + 1% of the coin’s value according to their coin price guide.

PCGS’s Walkthrough service tier will grade coins up to $100,000 maximum value and charge you $150 for the service. Above that, it’s the same as NGC, $300 + 1% premium over the fair market value of the coin, according to their coin price guide.

It’s important to note that these companies usually offer discounts if you submit coins in bulk for grading.

Besides, both PCGS and NGC require you to sign up for a membership before submitting your coins. Annual memberships at PCGS cost:

Does grading coins increase their value?

As we have mentioned before, just by grading your coin, doesn’t necessarily mean it will increase in value. Grading is a sure way to verify your coin’s condition and rarity, but it is up to the free market and the laws of supply and demand to determine its ultimate value.

How do I know if my coins are worth grading?

What you could do before submitting your coins to a grading service is to check their reference value on coin price guides. Both PCGS and NGC have online price guides you can check and compare with your specimens. If it’s likely you have a valuable item in hand, consider the grading costs before selling it.

What are the advantages of buying graded coins?

Buying graded coins is a safe you to make sure you are getting precisely what is being advertised. Plus, the encapsulation of the coin helps maintain its condition, in the long run, avoiding handling and natural environmental wear.

Start or expand your collection today with SD Bullion. We have a variety of graded coins available for you today at the lowest premiums over the spot price of gold and silver. Reach out to one of our customer support representatives in case you have any questions at 1(800)294-8732 or through our live web chat feature.