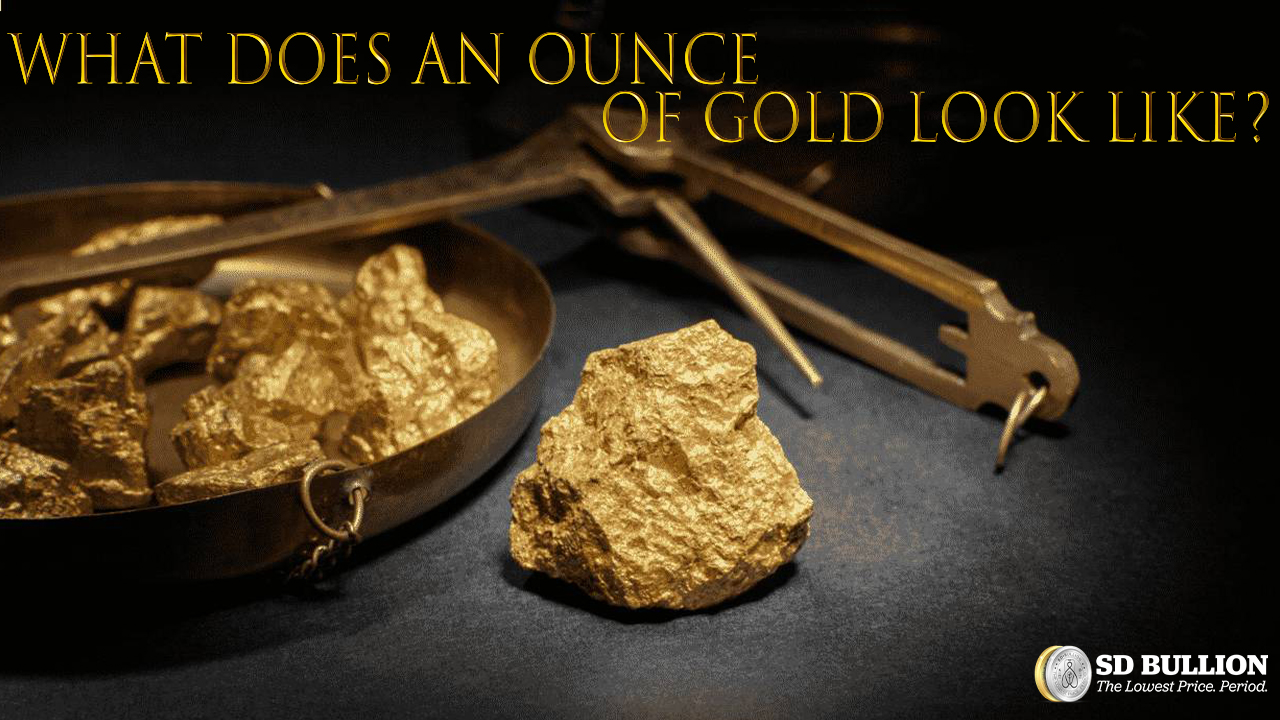 Ever since humans discovered gold, it has been the most sought-after metal on Earth. It adorned the most precious possessions of ancient Egyptians, coated the currency of many cultures, and inspired multiple gold rushes throughout North America in the 19th and 20th centuries.

While we’re accustomed to seeing gold jewelry and other gold-encrusted artifacts, many of us don’t really know what gold looks like in bars or its natural form of nuggets and flakes. For example, the gold price per ounce is roughly $1900, but what does an ounce of gold look like?

Let’s take a look at why gold is considered precious, how it is measured, what the common gold bar sizes are, and finally, what an ounce of gold looks like.

Why Is Gold So Precious?

Gold is the most precious metal to humans, coveted by almost everyone, but have you ever wondered why?

Originally, people used gold for ornamental jewelry because it was so malleable and ductile. It also retains its luster and is resistant to tarnish by air or moisture. Due to its rarity, malleability, and beauty, gold soon became synonymous with wealth and royalty in every culture that possessed it.

Gold is also scarce. In fact, if you were to put together all the gold that has ever been mined, it could fit into a 69-foot cube, and about two-thirds of all gold has been mined since 1950. Eventually, gold coins and other currency would replace the barter system, and gold has been highly sought after ever since.

Gold fever and gold rushes played a major role in westward expansion in the United States in the 19th and early 20th centuries. Many major U.S. cities were established or grew rapidly due to gold rushes, including Helena, Montana, Denver, Colorado, and San Francisco, California.

And of course, most of us are at least rudimentarily familiar with the famous Klondike and various other gold rushes that occurred in Alaska at the turn of the 20th century.

How Is Gold Measured?

Now that you know why gold is so valuable, let’s explore how we measure it.

Gold is measured in troy ounces, a unit of measurement used to weigh precious metals dating back to the Middle Ages. Originating in Troyes, France, a troy ounce is equal to 31.1034768 grams and is slightly heavier than a standard ounce. In addition to the troy ounce, the troy weight system includes the troy grain, the troy pennyweight, and the troy pound. Although troy ounces are the main unit of measurement for precious metals, gold may also be quantified in grams or kilos.

Have you ever wondered what is the difference between an ounce and troy ounce?

When not used in jewelry or coins, gold is often minted or cast into gold bricks or bars, known as gold bullion. Collectors and investors will be able to find gold bullion in various sizes and weights in the United States and abroad.

The most common gold brick sizes include: