Everything is breaking down.

Of course, it's not like this wasn't expected, but perhaps the fact that the breakdowns are already happening is what is alarming? That is to say, sure, most people have been expecting post-election chaos, but it looks like the chaos has already begun, and we're still a week away from the election.

This week started with a plunge in the stock market on Monday. The market dropped again on Tuesday, and it seems like the stock market will continue to have a rough time of it possibly all the way up through the election. The mainstream financial press (Bloomberg) is blaming "rising coronavirus infections and tougher lockdowns" as the main reasons for the stock market decline, but is that really all that's giving the market problems?

I don't think so.

There are other things negatively affecting the markets right now, too. When it comes to the next round of fiscal stimulus, all things considered, talks are on hold until sometime after the election. Speaking of the election, there is also much uncertainty with regards to who is actually leading who in the race, and when it comes to the winner's impact on the stock market, it seems there is also much uncertainty as to which candidate, President Trump or Candidate Biden, is "better for stocks". Furthermore, the civil unrest, looting, and riots have begun again, with Philadelphia taking the spotlight, for now.

Suffice to say, sadly, the markets and Main Street are breaking down.

If one holds the technicals before the fundamentals, this doesn't look good: 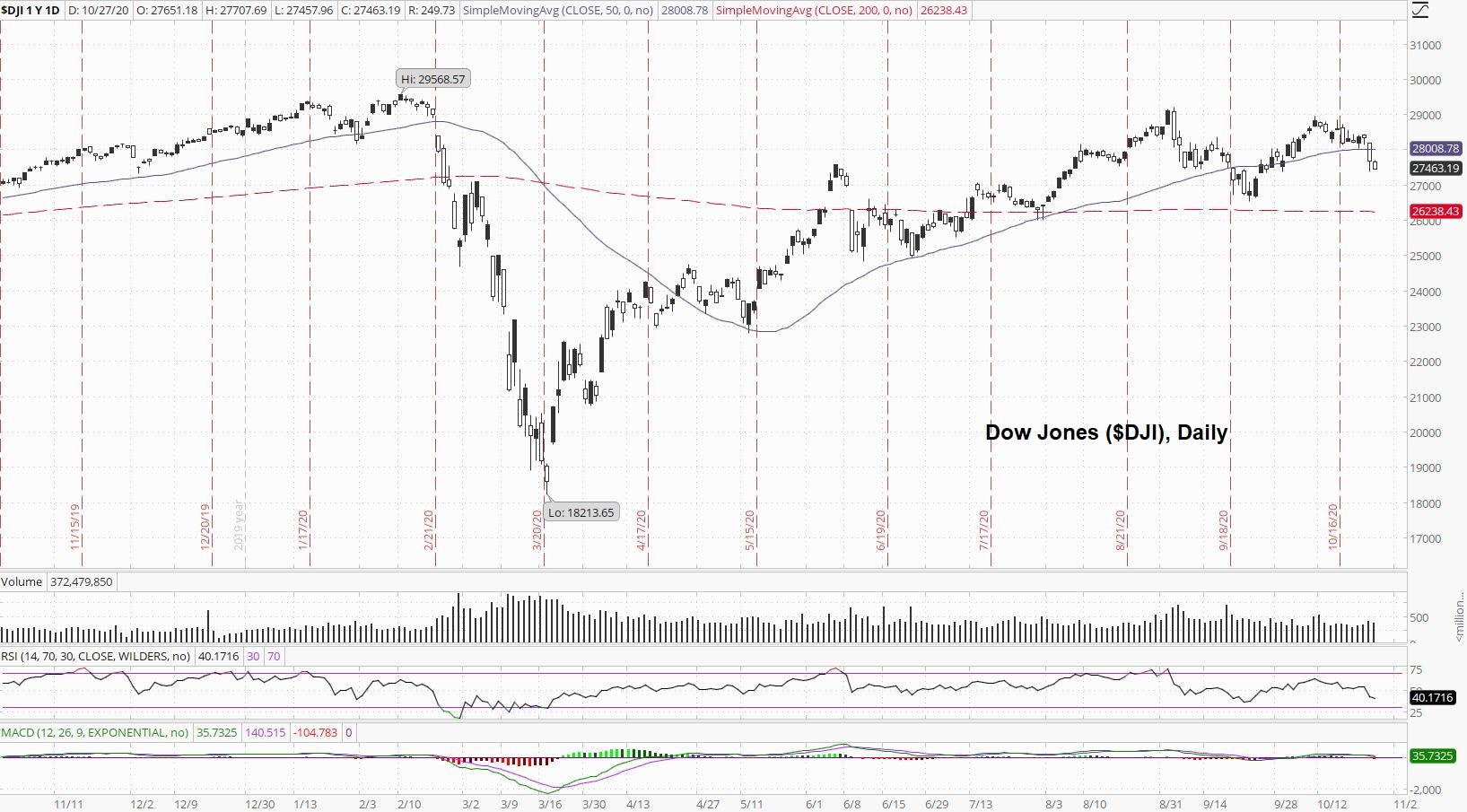 Is the stock market finally catching-down to the breakdown in the real world?

Follow up question: Does that mean the so-called "K"-shaped recovery is no longer a thing?

The VIX is spiking: 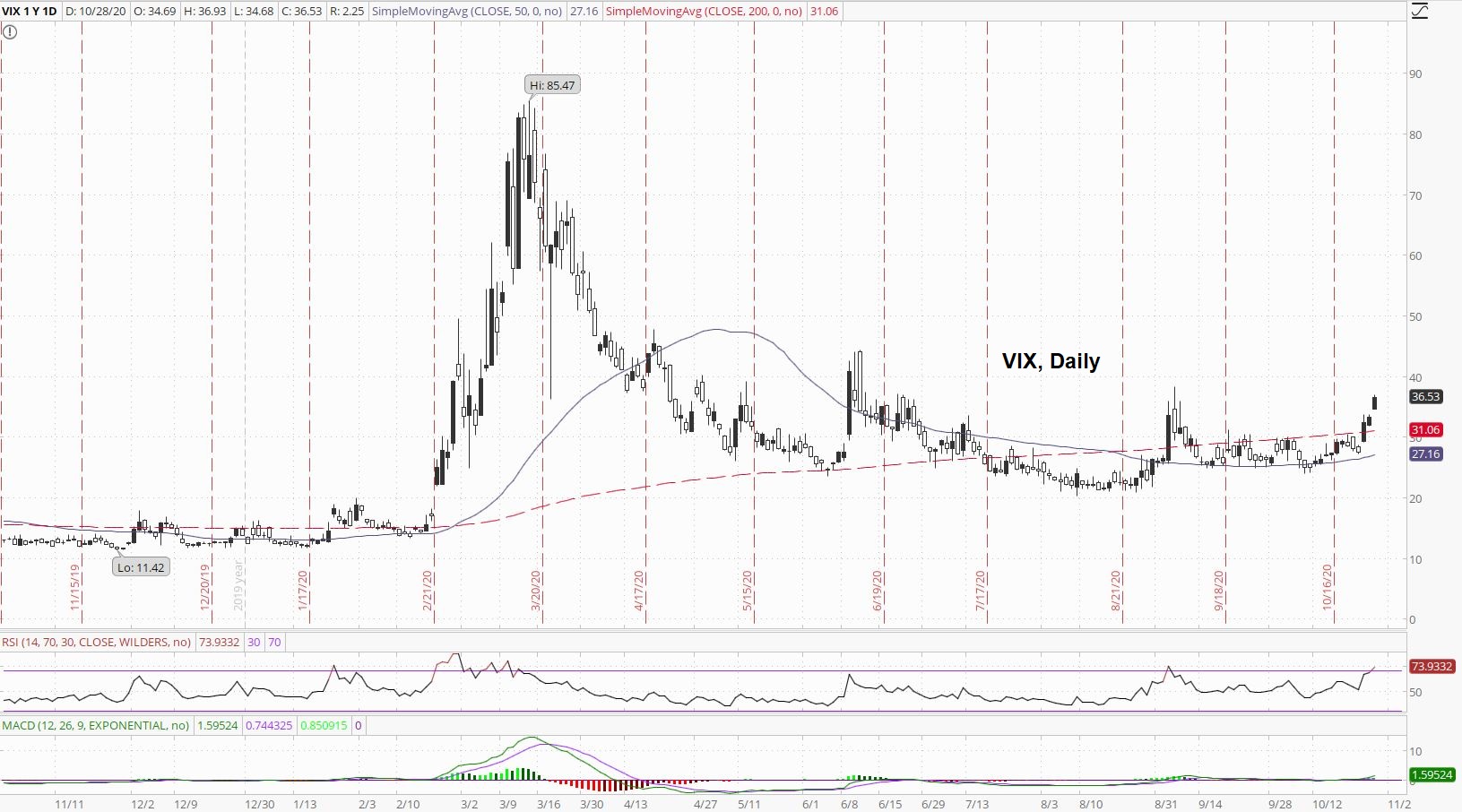 Fear is on the rise, and in my opinion, it has only just begun.

Whereas yield on the US 10-Year Note spiked over the last week or so: 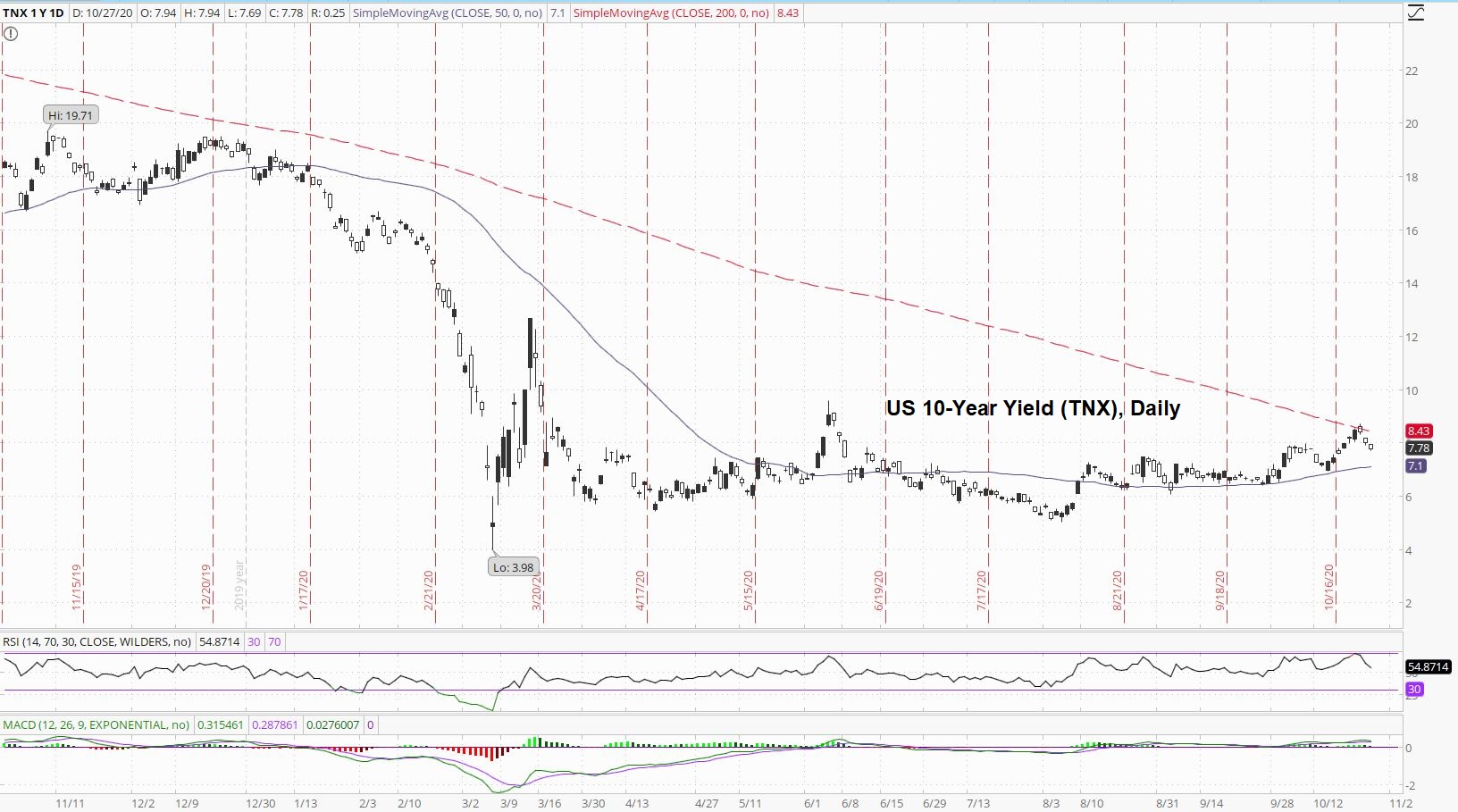 This week's market uncertainty certainly conforms to the narrative that investors are moving out of risk and into safety, doesn't it?

As such, the US dollar has also spiked: 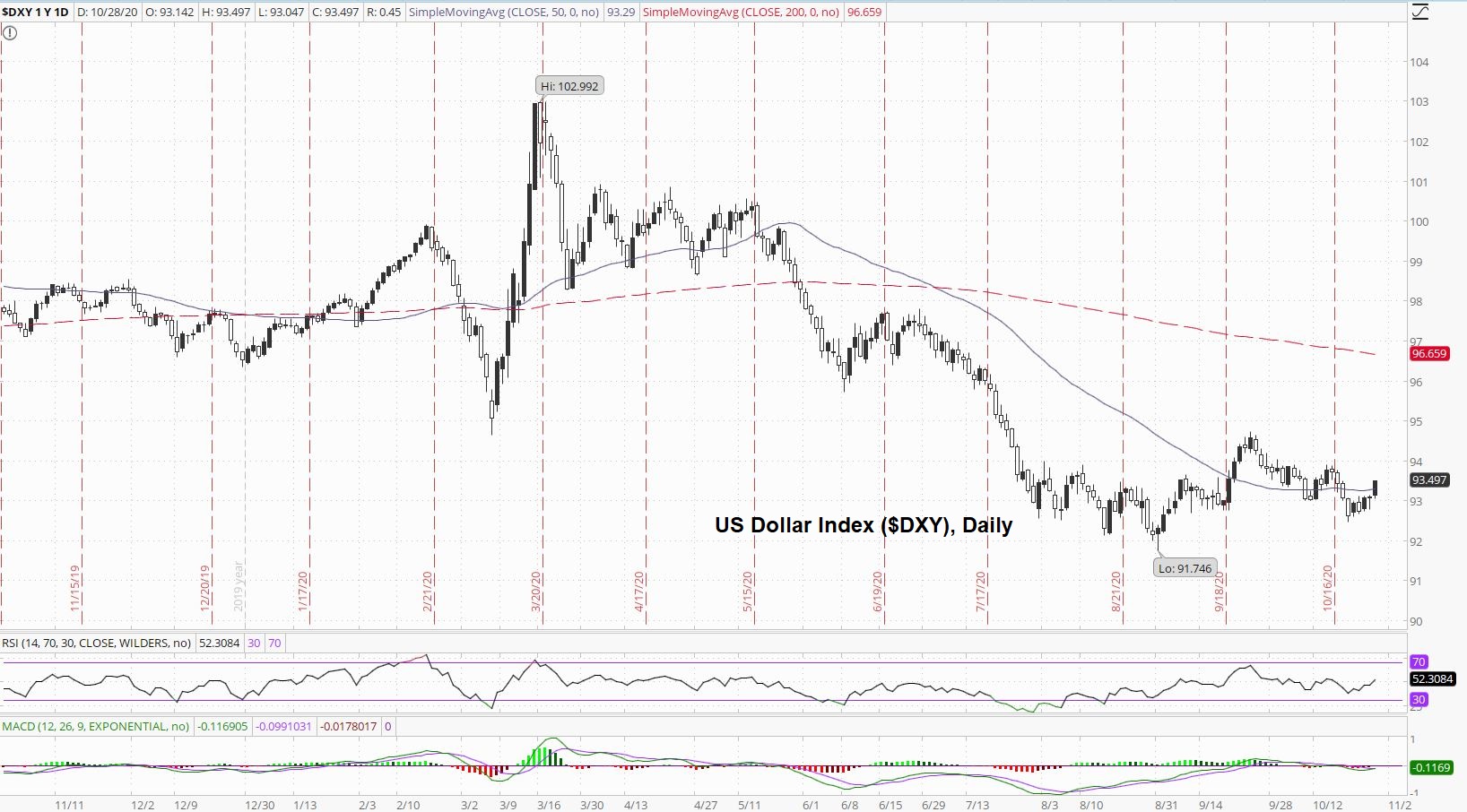 Although we've yet to break the short-term bearish trend (the series of lower-highs and lower-lows).

Crude oil may not be crashing, but it's not looking so good for the bulls: 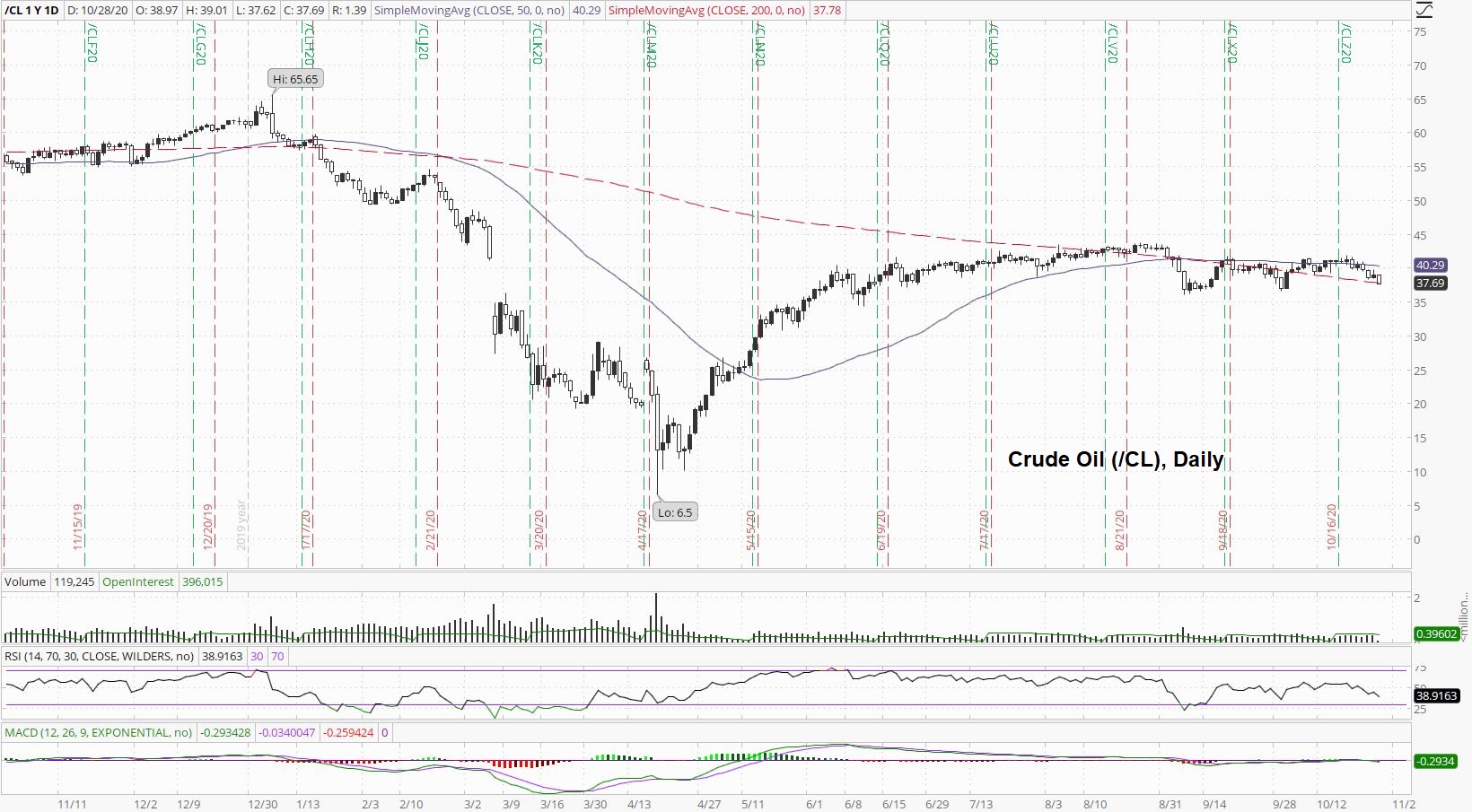 With no Middle Eastern conflict "fear premium" affecting crude oil in the near-term, black swans notwithstanding, increasing coronavirus lockdowns, travel restrictions, and general civil unrest, combined with a lack of fiscal stimulus flowing into eligible US taxpayers' bank accounts, make it seem like we could be set for another drop.

Speaking of a drop, copper has fallen for what looks to be the fifth day in a row: 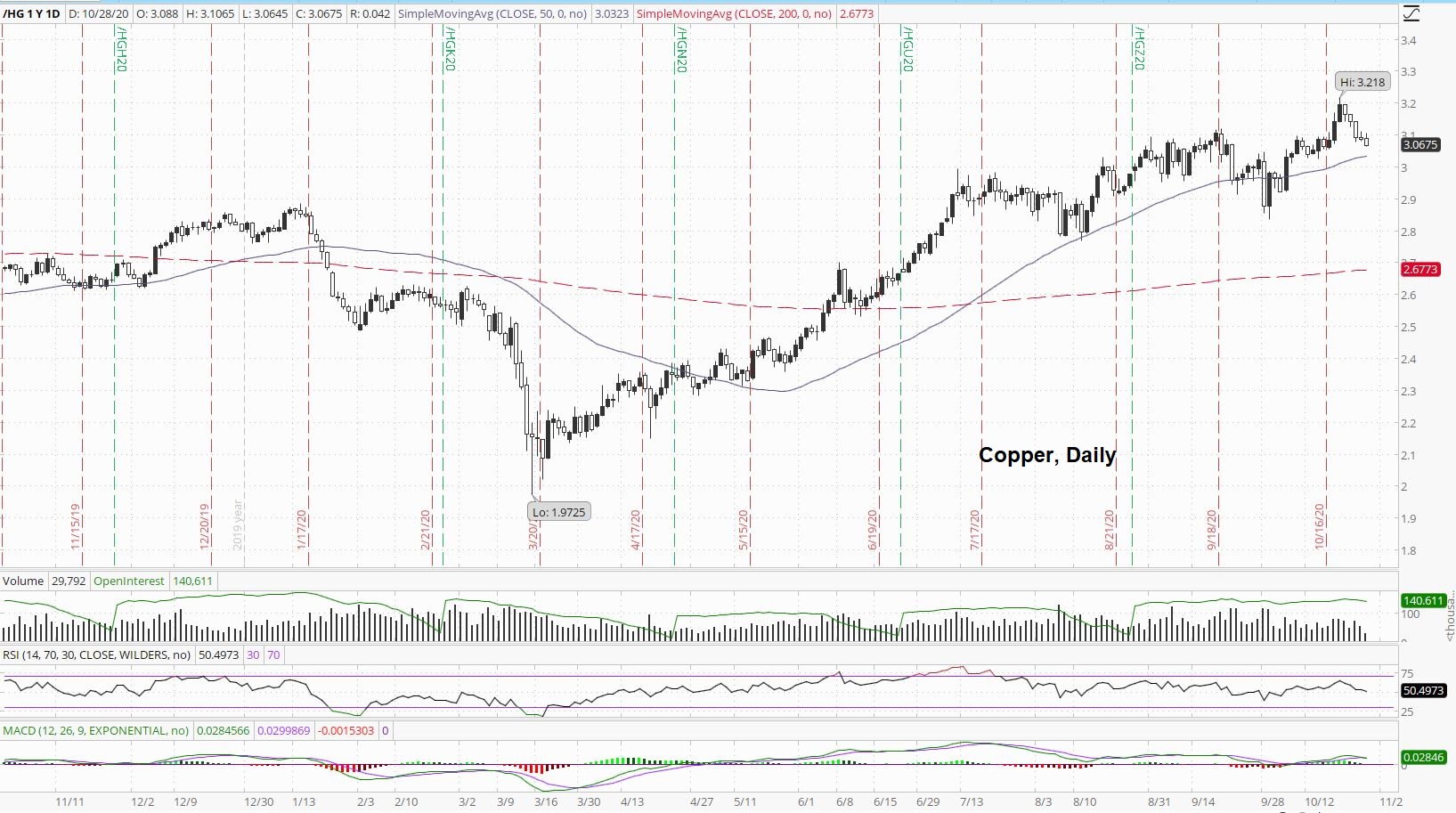 Platinum continues to amaze me, as it has all year long: 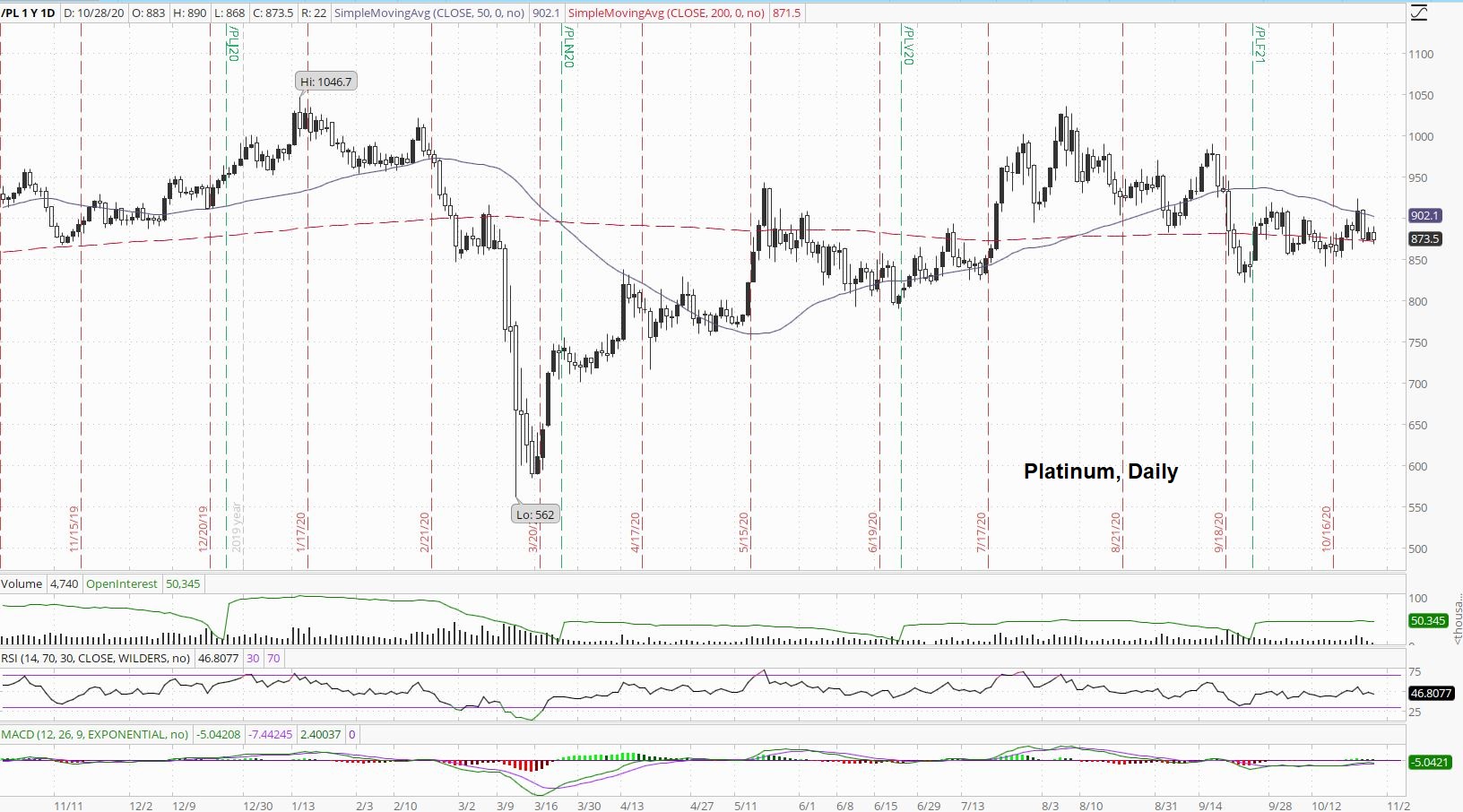 Palladium's down over 5% from recent highs: 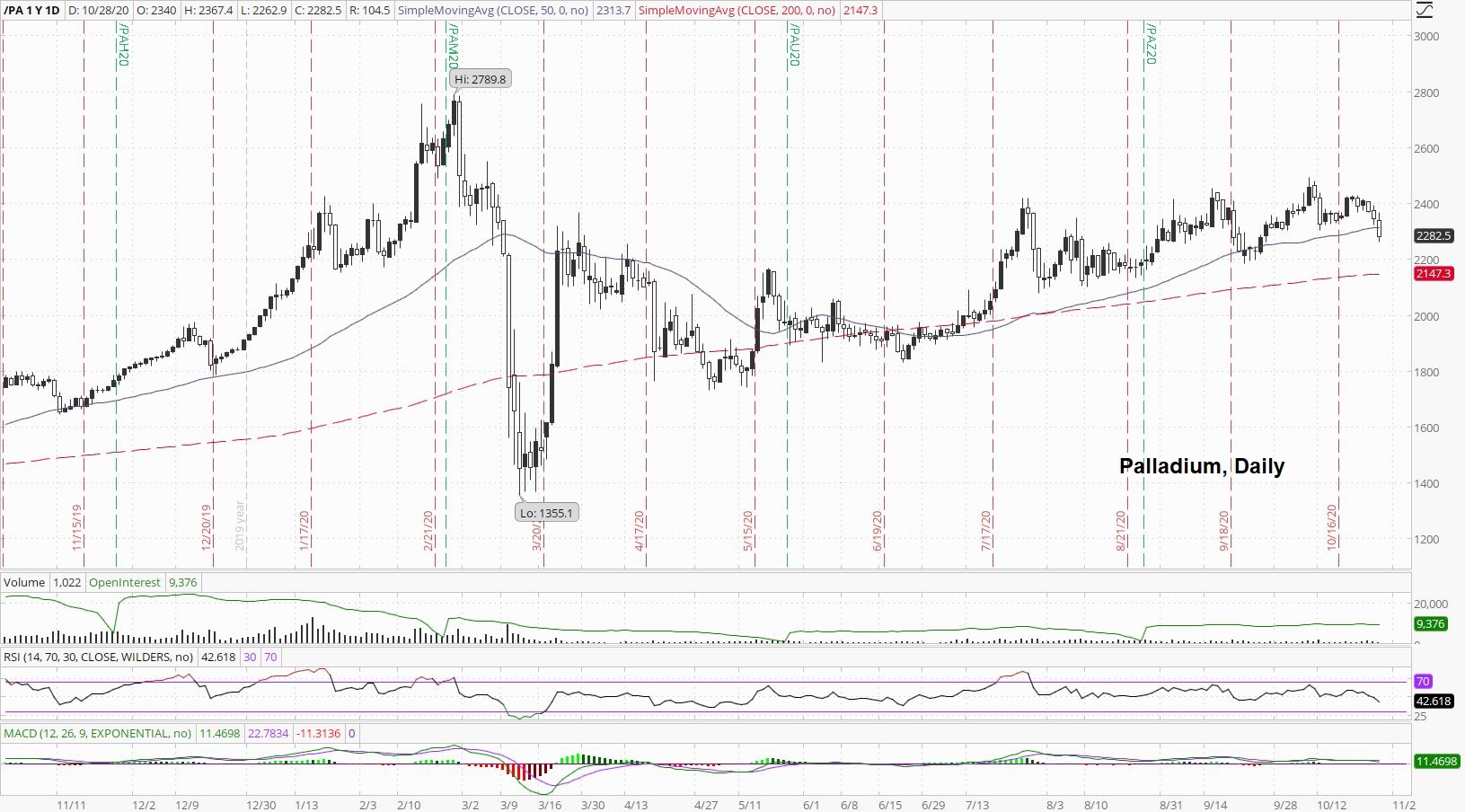 We'll have to see how this plays out because for now, our textbook bullish trend has broken with a lower-high and now a lower-low on the chart.

The paper gold-to-silver ratio is still perched in the upper 70s: 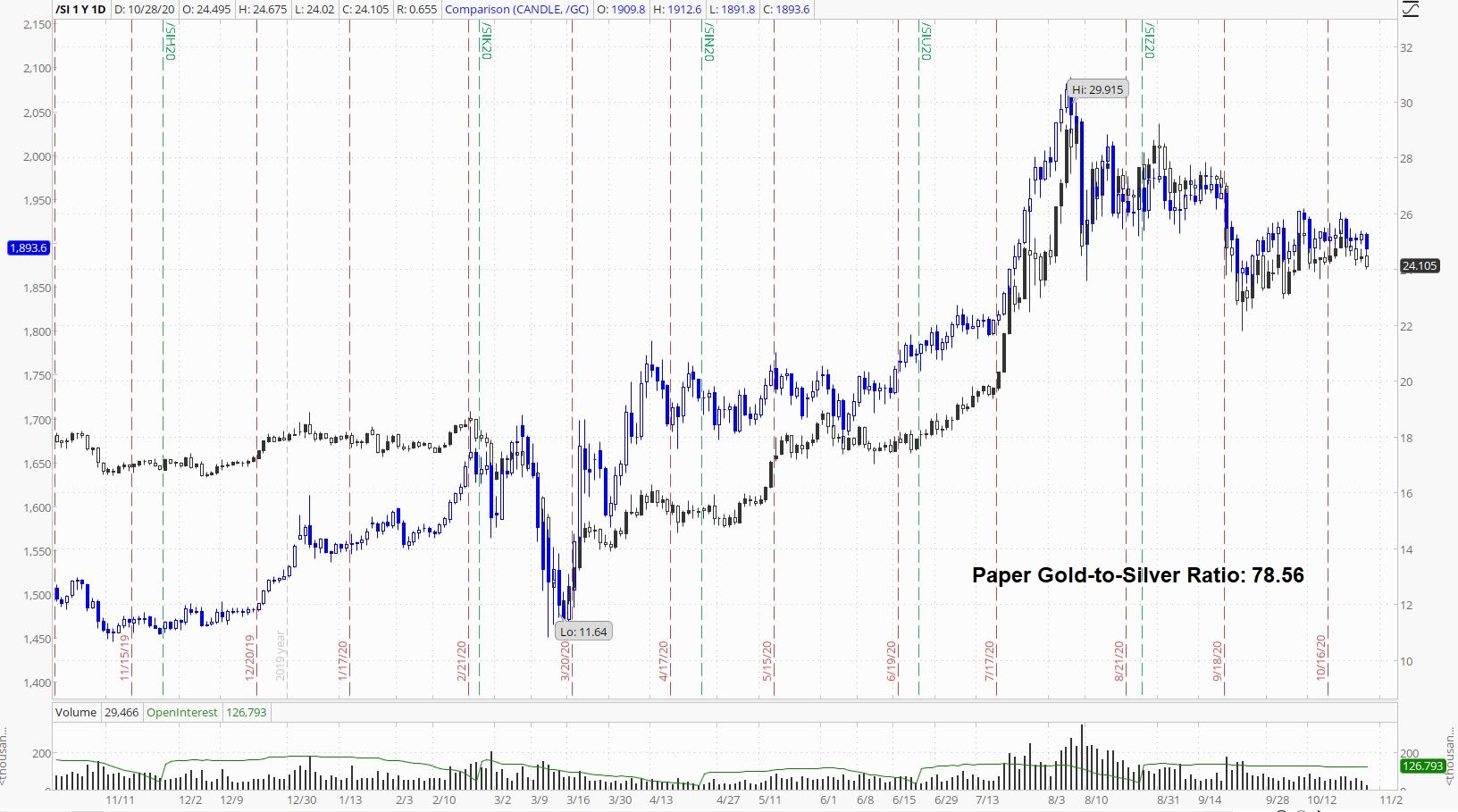 With both metals falling, however, not necessarily based on the fundamentals for one metal or the other, but rather, in my opinion, based on other broader fundamental factors, I don't think we'll see a lot of movement in the ratio.

That said, if we do see movement, with silver still a country mile from all-time record highs, I'd expect silver to gain on gold with gold falling more this time around.

That sounds counter-intuitive, but remember, silver didn't even breach $30 on its most recent run. 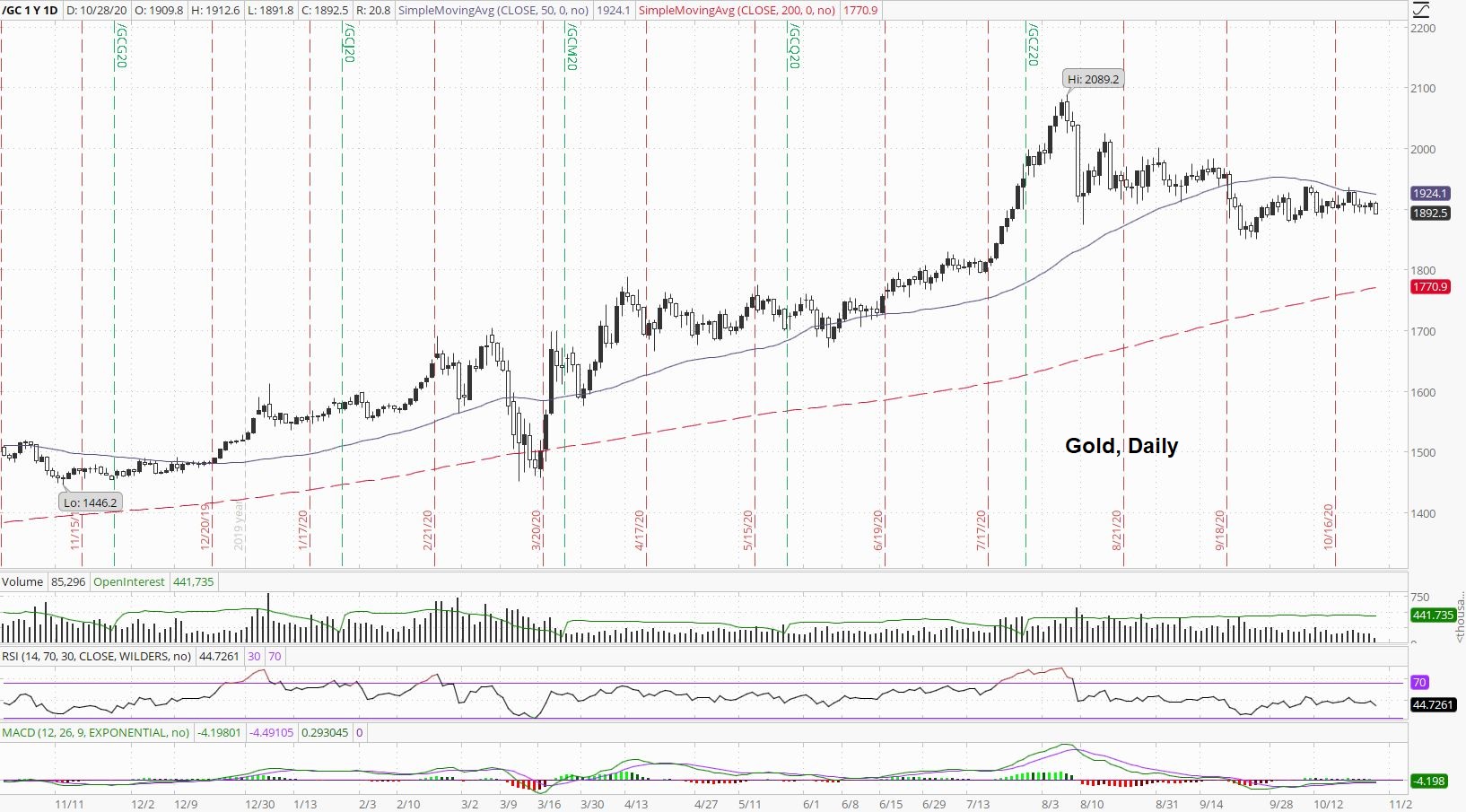 Gold had been holding there at support, even as the stock market began breaking down on Monday, but it sure looks like everything is breaking down right now. 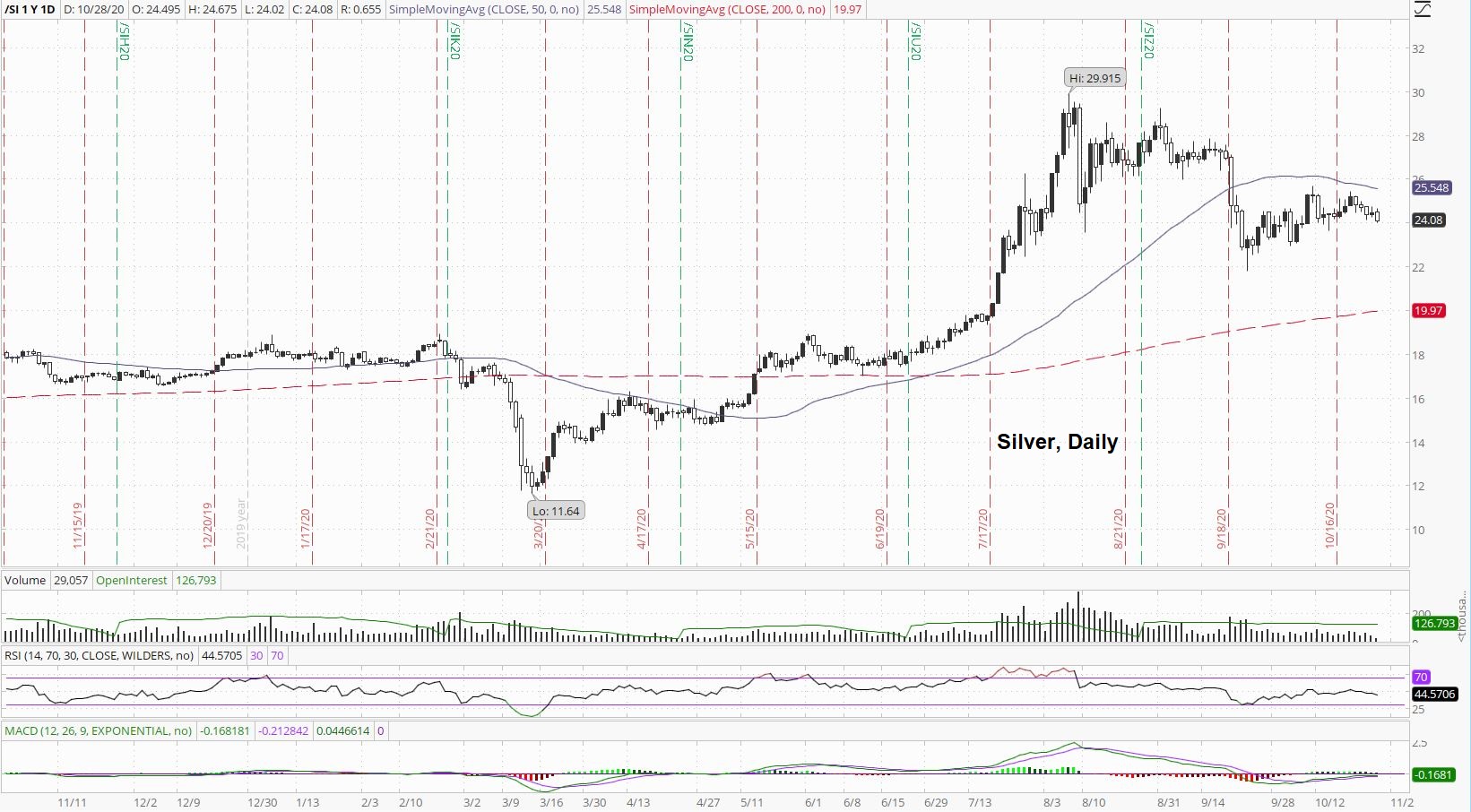 Which is why I don't think silver has very far to fall from here.