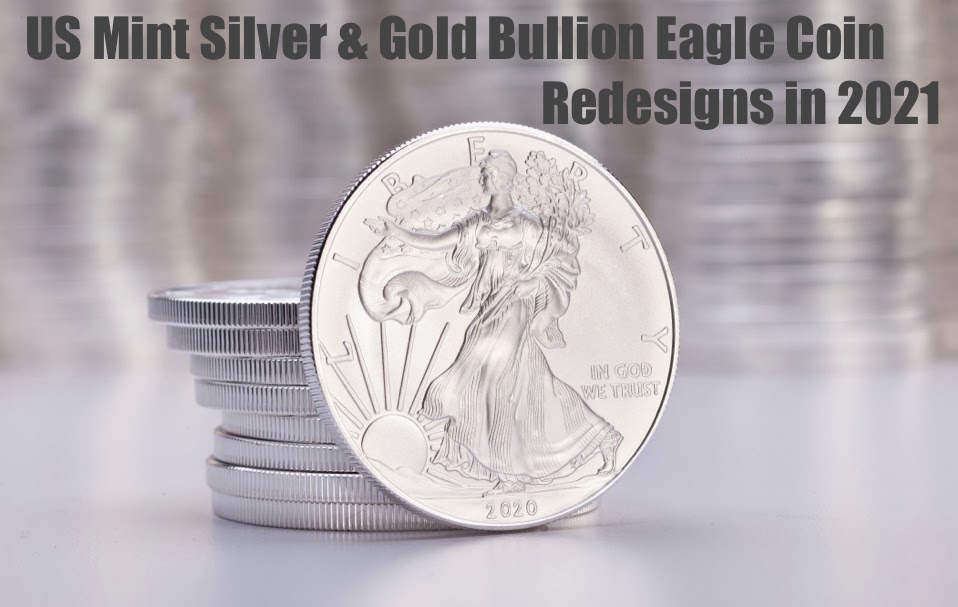 The US Mint is going to redesign both Silver Eagle and Gold Eagle Coins in 2021.

Better late than never for bullion buyers and bullion sellers looking for peace of mind when doing business.

This long hoped for bullion industry news is perhaps a breath of fresh air for the vast majority of readers, after 35 years of stacking generally the same looking American bullion coins. It is time for a needed change.

These new upcoming US Mint bullion coin reverse coin redesigns will include anti-counterfeit technology which should allow bullion buyers and bullion sellers to easily verify that the coin is a genuine US Mint issuance.

American Silver Eagle coins remain the most often purchased bullion product in our industry. There are a number of reasons why this is the case cited in the video below.

Learn More About the US Mint

With US Mint Silver Eagle and Gold Eagle Coin anti-counterfeit technology being input into their 2021 designs. Can we expect to see further demand for their new value-added designs in 2021 and in years to follow?

What might these new backsides of the popular Silver Eagle Coin and Gold Eagle Coin look like?

Will the US Mint be adopting something similar to the Sunshine Minting MintMark SI technology?

Will some sort of card be required to check for a detectible hologram? 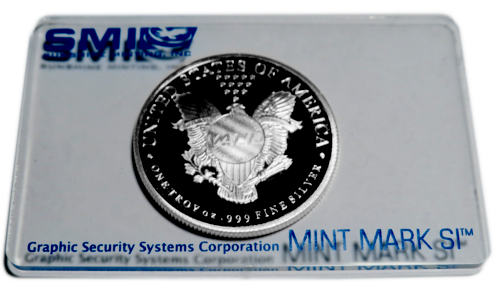 The Sunshine Mint has for more than a decade been providing silver coin planchets or blanks for the American Silver Eagle Coin program. Sunshine Minting silver rounds were one of the fastest hallmarks to incorporate anti-counterfeit technology into their highly popular silver rounds and silver bars.

Or will the new Silver / Gold American Eagle Coin designs be similar to the Royal Canadian Mint which requires further precision in manufacturing with micro-radial lines and micro engraving?

In the following Royal Canadian Mint video at just past the 1:00 mark. You can see how the RCM infuses their bullion coins using high-tech lasers burning micro year imprints into each bullion coin die used today.

Include the RCM's radial line additions on their bullion coins for anti-counterfeit protection. Both expedient moves were tremendous feats of anti-counterfeit design achieved years before other government bullion mints did similar actions for their customer bases.

As early as the year 2012, bullion industry experts had begun identifying fake Silver Eagle Coins and counterfeit Gold Eagle Coins electroplated or clad in thin layers of silver and gold.

Most of these fake coins were made with cheap inputs, containing 99.9% base metals such as zinc, copper, and nickel instead of genuine precious metal compositions.

Some higher-grade fake gold bars and other fake rounds coming out of China were more alarming. Many victims have been financially damaged by this problem.

Fake bullion products can be close enough to the real bullion items especially with silver coins and higher quality tungsten insert counterfeits, which made it difficult especially for new bullion coin buying entrants to detect such threats (best practices to buy bullion safely).

Novice bullion buyers using poorly regulated websites such as Craigslist, Reddit, or eBay began to be defrauded by small-time criminals who would often use low price offers to incite marks to buy fake bullion products at supposedly bottom-barrel prices.

Sadly it has often been average would be bullion stackers, who have been fooled by counterfeits coming out of China.

The Chinese apparently still have a lax attitude with high-grade counterfeiting other nation’s legal tender and physical precious metal currencies.

It remains fairly common to see publicly traded companies such as Alibaba ignore their very own company policies, neglecting to police this ongoing problem now for almost seven years. All while counterfeit sellers on their website remain in active violation of not only the company’s terms and agreements, nevermind just basic international legal tender law and order.

At long last, the US Mint has thankfully finally made the right move to head off this ongoing counterfeit threat beginning earnestly in 2021 and beyond.

On this SD Bullion blog, we do not shy away from critically thinking through US Mint sell out shortcomings or even criticizing the world's largest bullion coin mint director's boss (Steve Mnuchin) when merited.

We applaud all the aforementioned bullion mint's anti-counterfeit efforts and encourage the bullion industry and customer base to stay vigilant on this ongoing threat.

Competent bullion dealers who want to stay in business, they must continue to remain vigilant using strict inventory inspection policies to ensure every product bought or sold is indeed 100% genuine and guaranteed.

To learn more about best bullion dealer buying practices and how to safely sell bullion too, be sure to pick up our free SD Bullion Guide by email right now.

Thanks for coming by SD Bullion and visiting our blog today.