Fed Repo Loans Grow up to $120 Billion Per Night 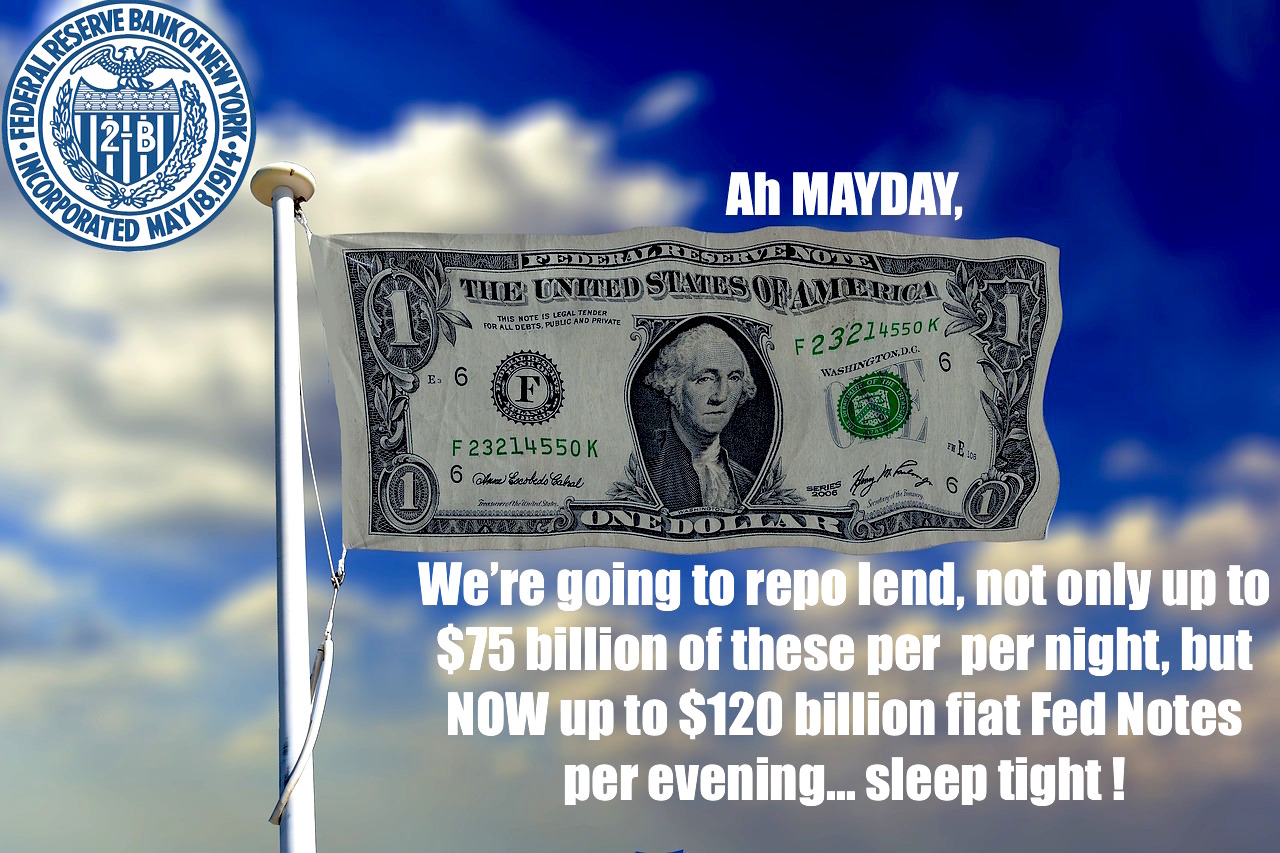 The private and unconstitutional Federal Reserve's not QE4 repo loan program will expand tomorrow by up to an additional 60% per evening.

Today partially via Twitter, the New York Fed announced that it is increasing its temporary overnight repo operations up to $120 billion a day from its original up to $75 billion per night commitment.

A now near $4 trillion fiat Federal Reserve note balance sheet is not shrinking unlike how the Bernanke and the Yellen proclaimed it would for years.

The next broken promise of their ilk might just be Yellen's arrogant 'no financial crisis again in my lifetime' statement.

Remember when the 1st Repo loan mess circa 2007 became a Bear Sterns, then a Lehman Brothers bankruptcy, then a $700 billion TARP bailout, leading to Fed audit, revealing some $29 trillion in total bailouts extended?

See if you can compute the following equation...

Have a look for yourself, and perhaps mentally prepare for $8 trillion+ Federal Reserve Balance Sheet in the coming decade's Baby Boomer Retirement Crisis.

Not QE4 may indeed be on pace to be yet larger and possibly more destructive than prior QEs combined.

Most importantly to date.

No one person nor entity at large has offered a proven, nor legitimate plausible financial explanation as to precisely why this is now happening.

Why is the Fed's balance sheet again rocketing upwards while overnight NY Fed repo loans are having to be widened and prolonged, yet again?

The onerous is on the Fed to answer, and for astute financial market participants to get out of the way of what may be coming soon.

You might recall the last time the Federal Reserve was forced to intervene in the overnight repo market was back beginning the 2007-2008 financial crisis. During that building repo loan round which ultimately led to financial bailouts, liquidity dissipated as overnight capital lenders doubted the quality of the collaterals provided by borrowers. Eventually, investment banks such as Lehman Brothers and alleged naked silver short seller Bear Sterns both became bankrupt. The later in the spring of 2008, the former in the fall of 2008 during the retail and wholesale bullion shortage.

Panic ensued by late 2008, and virtually any and all lenders demanded fiat cash from borrowers. There was a run on the banks in other words. This financial spillover ignited one financial fire sale after another as borrowers dumped financial securities to pay for their leveraged loans. This spilled over into both silver and gold futures markets causing a meltdown in respective spot prices. It also deflated both US and global stock markets. The rest is an ugly market crash and record-sized bailout which took years to uncover the full scope of.

We are operating with only a fraction of knowledge at the moment. Yet the Fed continues to operate as if they deserve the benefit of the financial doubt, again ongoing.

We still operating under the guise that NY Fed and FRED charts tells us what's really going on in the aggregate? pic.twitter.com/KAerWzYJpN

Now that the size, leverage, and scope of the financial system is much larger than the last time we saw trouble in the repo markets requiring Fed interventions.

Are we willing to bet that all is well under this growing ongoing bailout by the Federal Reserve?

How are fiat US dollar gold and silver prices looking right about now?