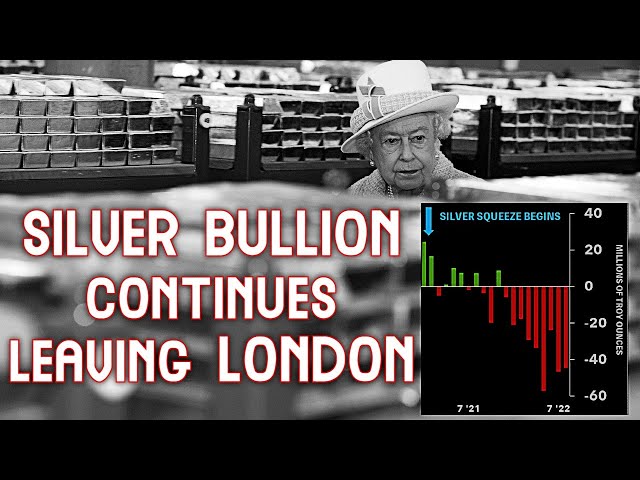 This week, citizens of the United Kingdom, those in once colonies of the former British empire, and people around the world are mourning the loss of Queen Elizabeth the 2nd.

Passing away at age 95, her reign of 70 years and 214 days was the longest of any British monarch and the second-longest recorded ruling of any monarch of a sovereign country in world history.

This week began with a dystopic clip going viral on Twitter, apparently from a British morning television where they are now giving away prizes for four months of free energy bills as we turn towards winter and rapidly escalating heating bill cost projections of 3,582 and 4,266 fiat pounds per household annually.

The gold and silver spot prices rebounded slightly in trading this shortened week.

The gold spot price looks to close around $1720 oz.

The gold-silver ratio closes at 91, which is still on a historic basis high, favoring silver bullion as the better long-term value buy at the moment.

This gold-silver ratio chart's red line in our video update this week illustrates how the gold-silver ratio has been averaging higher generally, with spikes both above and below the general green trend line throughout this entire fiat currency era.

A repeat of silver outperformance of gold akin to the 2010 to 2011 run would have the gold-silver ratio eventually breaking below 50 at some point in the building bullion bull market.

This longer-term chart puts official government gold bullion holding in perspective. Since the 2008 global financial crisis, eastern governments have been buying gold bullion over fiat bond issuances more than they did before.

The eastern world nations now officially have over 1/4th of government gold bullion holdings. Of course, we do not know how much official gold China will eventually declare one day when it suits its sovereign agenda.

Here in the United States, savers of fiat Federal Reserve notes continue to get punished and robbed of their purchasing power by ongoing price inflation. Given mass trillions in US record debt and US unfunded liability loads, hard to imagine we will see anytime soon where the fiat Federal Funds rate (the blue line below) gets above the orange underreported price inflation line.

Charlie Bilello points out that the last five times US inflation peaked above +5%, it took a much higher Fed funds rate and a recession to bring it back down. Will this time be different?

Some recent bond market data illustrates that all is not well with Globally Systemically Important Banks, or G-SIBs, as the Bank for International Settlement Financial Stability Board calls them.

Credit Suisse’s 5Y Credit Default Swap or CDS spreads are now at their highest since the Global Financial Crisis in 2008. The Swiss-based globally significant systematic bank has been facing a lot of flak ever since the collapse of its $10 billion supply chain finance funds related to Greensill and $4.7 billion write-down tied to the Archegos Capital fiasco in 2021.

Further, Credit Suisse has also been under the pump due to money laundering issues and its planned workforce downsizing. It has focused on scaling back its investment bank and reducing more than $1 billion in costs of late.

In another data update on dwindling silver bullion piles in major western silver price discovery exchanges, we showed you this chart illustrating silver flowing out of London over the last smattering of ten months running.

Perth Mint sales data for silver and gold bullion coins continue to show strength and a new paradigm in volumes since 2020.

Comex registered silver ounce holding fell below 46 million to close this week as both US and London silver warehouse supplies have shrunk further.

Also, on a related note, regarding the real value for gold and silver versus other asset classes.

There has been a large near 100,000 dollar cascade in average US house sales price data, and that downward trend could only begin with interest rates relatively much higher now than their record low levels only a few years back.

On a longer-term basis, measured by gold, perhaps this long-term Us house valued by the gold chart is beginning what I contend will become an eventual rollover to and probably beyond the 2011 low levels.

A similar small but recent rollover trend is shaping up also in US house prices valued by silver, again considering the 2011 low levels compared to where they are today.

Finally, considering stubborn inflation rates and record indebted corporate balance sheets currently, the poor performance of the S&P 500 coming off its record nominal bubble high level to start this year 2022, is not a surprise that it has performed the fourth worst year to date since before the 1929 stock market crash.

The fact that we have also had strong bear market rallies in stocks to keep delusion bulls long is to be expected coming down from the largest stock bubble high ever recorded.

Measured in gold value, the S&P 500 has a long way to fall in absolute value terms from where it is today versus where it was in 2011. My bullion bet is we eventually return nearer to 0.7 from the over 2.3 level we closed this week. A more than three-fold outperformance for gold's value versus stocks if this chart rolls over, as I contend it will repeat in the turbulent years to come.