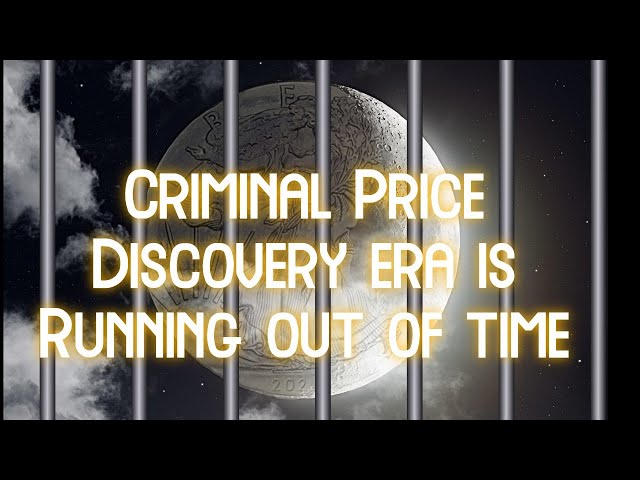 The former co-head of JPMorgan's precious metals trading desk and his top gold trader got convicted by a federal jury after a three-week trial.

During the trial, jurors and the public learned of the obscene amounts of profit and compensation JP Morgan and its often rogue set of criminal precious metals traders made while rigging precious metals markets.

Nowak and Smith made well over $30 million between the two. Now, they face the potential threat of decades of incarceration in Federal prison. While sentencing dates remain unclear, the bank JP Morgan continues to dominate the US precious metals derivative markets while having made billions in profits since 2008, only having been fined $920 million for market crimes committed at its desk from 2008 through 2016. Many who participated in said crimes within the bank often privatized their gains without punishment. The ones who end up paying the bank's market rigging fines are typically unsecured shareholders of the bank's stock.

While the US Department of Justice takes victory laps, having to date convicted a total of ten former precious metals derivative traders from commercial bank market rigging desks like JP Morgan, Bank of America, Deutsche Bank, The Bank of Nova Scotia, and Morgan Stanley.

It took nearly 11 to 14 yrs for US agents outside of fiat currency-creating commercial banks to do anything about brazen lawlessness within precious metals derivative markets (specifically within the CME Group's COMEX and NYMEX precious metals futures markets).

'TRUST & INTEGRITY' evaporated a long time ago, and gone with it is any semblance of respect or believability in the supposed regulators who turned blind eyes for over a decade and more prolonged.

Of course, it would not be the precious metals markets if this developing story was not weirder than cursory coverage illustrates, so later in this SD Bullion Market Update, we'll go deeper.

And most importantly, we'll look beyond the scapegoating of a few greedy degenerate precious metals trading criminals and look more at the ongoing daily gold silver price data.

To better understand how systematic western gold and silver value suppression has worked over decades.

Systematic market rigging has allowed current-day bullion buyers to acquire precious physical metals at relatively steep discounts than otherwise would have been if we had, somehow, had legit price discovery markets over the past few decades.

Stick around for those updated charts and mind-bending gold and silver price figures.

Once you better understand this ongoing systematic saga, you won't be shocked when silver and gold go into respective price manias to the upside again.

The silver and gold markets began and finished the week with some spot price strength.

The spot silver price finished just under $21 oz, with the spot gold price above the critical $1,800 oz level.

The gold-silver ratio has fallen to 86.

One of this week's largest fiat financial headlines revolved around a slight drop in the US government’s underreported price inflation CPI figure.

According to the world's largest debtor nation, price inflation has decreased since last month's 9.1% update. According to the US government’s BLS, fiat US dollar holders are only now losing -8.5% per year in purchasing power. Lessoning ongoing losses by slightly lower gasoline prices at the pump.

Almost 1/3rd of the yearly CPI inflation computation underreported shelter price escalation figures. With about 1/4th being a guess by US homeowners called Owner's Equivalent Rent. They believe they might be able to rent their home even though they don't know the local rental market.

Where actual US market data points to rents being up in the middle teens in percentage terms over the past year, US home prices have climbed +20% across the board at the same time. Using that accurate data would make actual CPI double digits if the government didn't constantly lie and underreport rapidly escalating home and rental prices.

So no, losing over one-tenth of your purchasing power per year is not bullish. Instead, selling off into this and futures bear market rallies while they last might make better sense given current still bubble-level stock market valuations.

We are moving back to our main story for this week's SD Bullion Market Update.

This past week we also learned a former COMEX gold and silver derivative hedge fund trader was also criminally charged for spoofing the precious metals markets during the 2010s while at times controlling nearly 1/10th of all COMEX gold futures derivative contracts.

Daniel Shak ironically sued JPMorgan Chase late last decade and received a settlement from said commercial bank for an untold sum. Hopefully, he didn't gamble those proceeds away on poker tables because he will likely need millions to defend himself and his freedom in a Federal court case upcoming.

As various alleged precious metals market rigging rats turn on one another, we turn to the seeming lawless City of London. For decades, the allegation is that the daily silver and gold London price fixings were just that, a price rig benefiting insider banks and traders.

To date, $100s of millions have been paid out in settlement fines rewarding large losers on the wrong side of these massive market-moving gold price-setting trades.

But let us again glance at the damning day-to-day London gold price data over the last 52 years, beginning in 1970 and running until today.

The London Bullion Market Association, or LBMA, started in 1987, is a subsidiary of the Bank of England.

Aside from formerly having precious metals market rigging traders on its LBMA board, it pretends to regulate London's gold and silver markets properly. Never mind hundreds of millions in ongoing price fix scandal payouts and my alleging systematic price rigging for decades compounding, illustrated by the diverging three gold price lines here.

The black line is the aggregated difference between the London AM and PM gold price fix running for the last 52 years. It started at $35.12 and a half cents per ounce of gold beginning in 1970 and has since gone on to trade down to $2.54 oz gold intraday London gold price fixing 2022.

So basically, the gold price in London trading hours has decreased by -93% aggregated within its AM to PM fix trading hours over the last 52 years.

The red line is the ongoing London AM price fix daily data, a snapshot nearly mirroring the spot gold price over the same timeframe.

The escalating blue line is how gold has traded outside London's massive derivative leveraged market. You get this by adding daily gold price trading data over 52 years outside London. Without London involved, gold would be trading around $24,869 oz today.

I know that sounds crazy, especially if you are new here. You can learn more about the collusion between the US Treasury and London gold trading powers since late 1974.

Moving over to the silver side of what I argue is the western world's systematic gold and silver price and valuation suppression yet to unravel.

We look again at the New York CME Group COMEX trading data over the last 52 years.

The two gray bars added here reflect the time of the recent guilty market rigging of JP Morgan's precious metals, and derivative traders, from 2008 to 2016. And technically, spoofing was the way they got busted. The more significant crime still evolving is this derivative ass-backward price discovery market, an accident waiting to go off and up a price escalating wall.

The red price line is the New York open price, which mirrors a snapshot of the silver's spot price over the last 52 years.

The blue line is the running silver price outside New York trading hours over the last fifty-two years.

When and at what price will the red and blue line meet again in years ahead?

That remains to be seen, but it's likely many multiples from today's silver spot price in the $20 oz level.

The clock is ticking as silver bullion gets withdrawn in high volume from London and COMEX's underlying warehouse inventories.

Those with patience and prudence are now buying bullion at what I would argue are heavily discounted spot price points.

One day this will not be the case. Bullion prices and real values will become exorbitantly price prohibitive and much higher in absolute value terms than they currently are.

As always, you are out there.