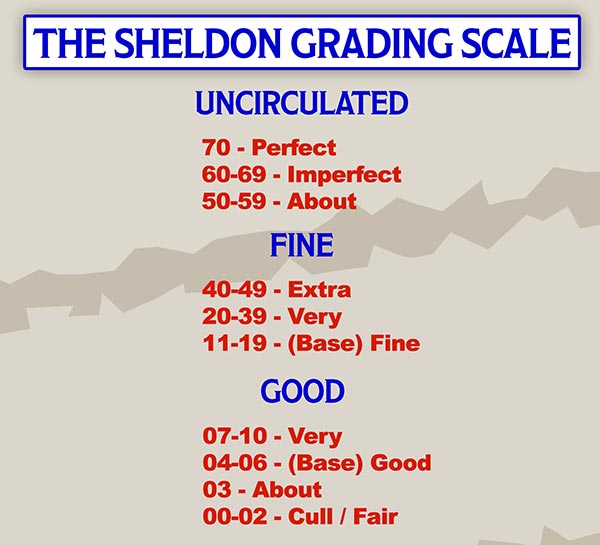 Graded coin specimens attract both investors and collectors as they know exactly what quality to expect. Although there are many grading agencies out there, two of them are regarded highly in the precious metals market, especially here in the United States – NGC (Numismatic Guaranty Corporation) and PCGS (Professional Coin Grading Service).

Without a global standard, the entire grading process would be wrought with confusion as buyers try to decipher what grade indicates what conditions using charts and figures from various agencies. Hence, grading services usually use the Sheldon Scale – a globally-recognized scale used to grade coin specimens.

This scale was created by Dr William H Sheldon. The original scale was published as a way to grade large cent coins in 1949.

Today, most grading agencies, like the NGC and PCGS, use the Sheldon Scale to assign standardized grades to all coin specimens. The scale ranges from 1 to 70 and is preceded by letters that indicate the strike type of the coin in question.

While the Sheldon Scale used by these companies doesn’t vary, the designations and letters used to denote strike type often do.

Uncirculated coins are assigned a number between 60 and 70 to indicate their condition. A grade of 70 is considered flawless, because it doesn’t display any surface imperfections even when inspected by experts under magnification. Hence, collectors and investors are quite willing to bear the premiums they command.

Circulated coins understandably exhibit a bit of wear. From slight wear and tear to barely recognizable, the Sheldon Scale grade assigned to the coin can tell you a lot about the coin in question.

Established in 1987, NGC is one of the most prestigious third-party coin grading services in the United States. Moreover, being independent of any private or sovereign Mint (IE: US Mint), their motivation is simply to provide the best quality assurance service to coin collectors and investors.

Furthermore, the coin graders employed at the NGC cannot buy or sell coins, as per their employment contracts. Hence, they remain impartial in the coin grading process, as they aren’t personally or financially affected by the grades they assign to any particular coin.

Over the past two decades, NGC has become one of the most trusted grading agencies in the world with over 35 million coins graded to date. It is known for authentication, grading, attribution, and encapsulation of millions of coins and its reputation has been steadily rising ever since its inception.

PCGS is one of the oldest coin-grading agencies in the United States and was established in 1985. It is headquartered in Santa Ana, California. The sole aim of the seven dealers, including the current president of PCGS, David Hall, while setting up the agency was – providing more information about coins to the public, before they dip into their wallets.

Over the past three decades, PCGS has built a solid reputation upon millions of accurate grades, making it one of the most respected authorities on coin grades. Their vast experience inspires confidence among buyers who trust their grading system, knowing that the grade assigned to any coin by the PCGS is bound to reflect its condition accurately.

PCGS was formed with the aim of protecting prospective buyers from spending a considerably higher amount of money for a lower quality product. With over 38 million coins graded to date, it is safe to say that the agency is well on its way to accomplishing its goal.

Introduction to Coin Grading by PCGS