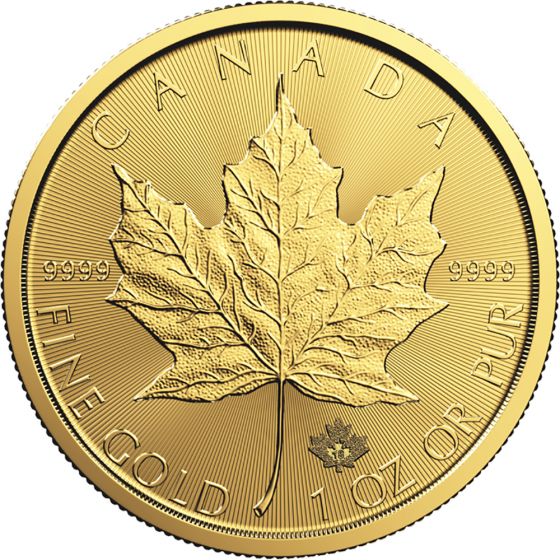 One of the most famous gold coin series in the world just got bigger! The Royal Canadian Mint has released the 2018 1 oz Gold Maple Leaf Coins, and they are now available at SD Bullion. This annual release is a popular one, among both collectors and investors.

The very first Gold Maple Leaf was launched in 1979. Although the first few releases featured only the 1 troy oz option, many fractional gold weights were added later. Today, these coins are available in 1 oz, ½ oz, ¼ oz, 1/10 oz, 1/20 oz, and 1-gram variants. Furthermore, barring the first three annual releases, these coins have always been struck using 0.9999 pure gold. Coins launched between 1979 and 1982 contain 0.999 pure gold instead.

Each of these Gold Maple Leaf Coins is assigned legal tender status in Canada, with every coin carrying face values of $50 (CAD). Moreover, these coins are struck using 1 troy ounce of 0.9999 fine gold.

The obverse sides display Queen Elizabeth II’s portrait in marvelous detail. Created by Susanna Blunt in 2005, this portrayal remains an integral part of circulation coinage in the country even today. This elegant portrayal is surrounded by the Queen’s name, the coin’s face value, and its year of issue.

On the other hand, the reverses of these coins display Canada’s most iconic symbol – the majestic maple leaf. The Royal Canadian Mint has designed the leaf without missing even the minutest of details. The leaf’s veins sprawl across its surface – elegantly highlighting a complex network that makes the design look very real indeed.

A smaller maple leaf sits underneath the big maple leaf. This leaf has a minuscule laser engraving that houses the last two digits of the year the coin was minted in, i.e. “18” in this case. The Royal Canadian Mint added this security feature to Maple Leaf Coins in 2013.