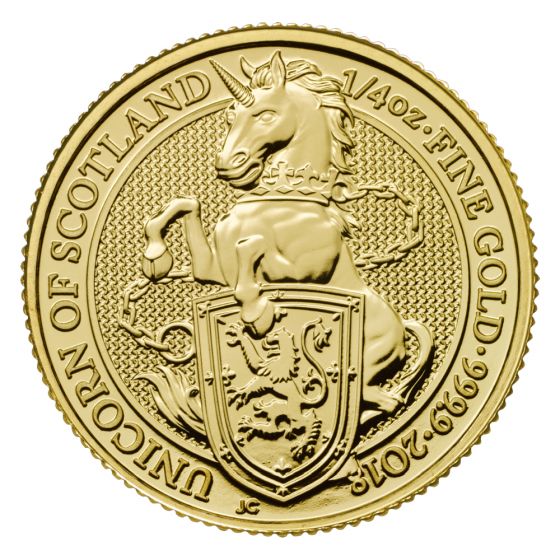 2017 1 oz Queen's Beasts Gold Coin - The Dragon of Wales - Royal British Mint
$2,031.81
Description
The 4th release in the Queen’s Beast Series celebrates the elegant, yet fierce Unicorn of Scotland. These 2018 ¼ oz Queen’s Beast Unicorn of Scotland Gold Coins bear the much-awaited unicorn design – portraying the mythical creature in all its glory. Furthermore, this is the very first release from the Royal Mint featuring its brand-new guilloche obverse design – adding a unique background to the obverses.

Queen Elizabeth II’s coronation showcased the effigies of ten majestic beasts, each picked by one of her ancestors during their rule. Royal Mint aims to celebrate all the beasts that stood guard at the ceremony with the Queen’s Beast series of gold and silver coins. This particular mythical creature, the Unicorn of Scotland, was first chosen by King William I to feature on the official Coat of Arms.

Each of these coins contains ¼ troy ounces of 0.9999 pure gold. Moreover, they are considered legal tender in the United Kingdom, every coin bearing a face value of £25 (GBP) each.

Reverses of these gold coins highlight one of the most elegant mythical beasts present at Queen Elizabeth II’s coronation ceremony – the Unicorn of Scotland. The imprint of the name of the beast “Unicorn of Scotland,” the year of issue “2018,” and the weight and purity of the gold surround the Unicorn image.

These 2018 ¼ oz Queen’s Beast Unicorn of Scotland Gold Coins will make excellent additions to both coin collections as well as precious metals investment portfolios. Snag the 4th release under the Queen’s Beast coin to ensure your set remains complete and up-to-date.