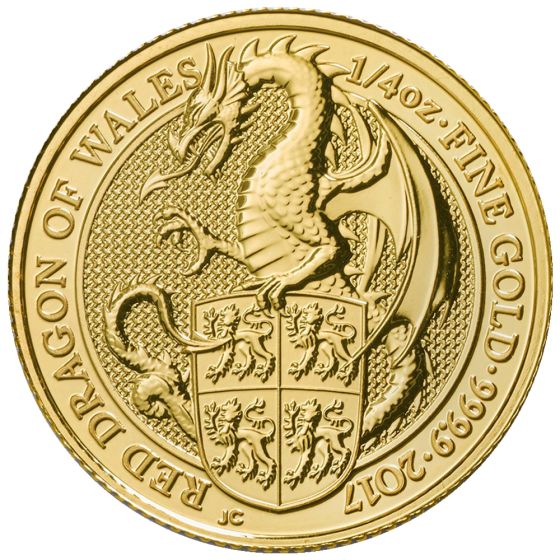 The Red Dragon of Wales is perhaps the most recognized mythical beast amongst the ten Queen’s beasts. Honoring this beast, whose stone statue stood guard during the coronation of Queen Elizabeth II, the Royal Mint has released the 2017 ¼ oz Queen’s Beast Gold Coin. The Queen’s Beasts are ten mythical creatures that represent the complete genealogy of Queen Elizabeth II.

Established in 886 AD, the Royal Mint is one of the oldest operational mints in the world. It was instituted during the reign of Alfred the Great, with the name ‘London Mint.’

The image of the Red Dragon of Wales is imprinted on the reverse, clutching a shield with one of its mighty talons. Moreover, the coin’s outer rim bears the name of the beast ‘Red Dragon of Wales’ and the year of issue ‘2017,’ followed by the weight and purity of the metal used to strike this coin ‘1/4 oz Fine Gold 0.9999.’

Meanwhile, the obverse of this coin bears the beautiful Jody Clark rendition of Her Majesty Queen Elizabeth II’s portrait. This image is also used on the obverses of all official coins in the United Kingdom.