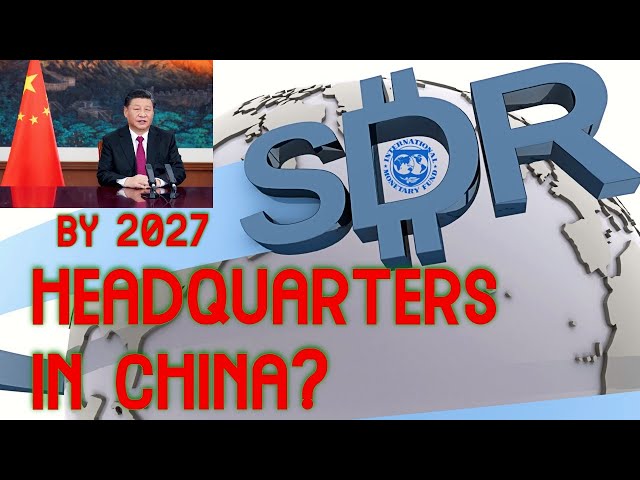 Openly the now head of the world's second-largest central bank, once publicly expressed the goal to have the IMF's SDR system coordinating the global financial rules of the game all while moving its current headquarters from the USA to Beijing, China by 2027.

The IMF Special Drawing Right (SDR) appears now a probable direction for the next major global structural and monetary changes to come.

Current trends within the USA granting the IMF SDR more leverage, and too the sheer amount of growth in trade to come in Asia 2020s and beyond make a more multipolar financial future a higher likelihood than the fiat $USD dominated version we are sputtering along with still today.

This week's SD Bullion Market Update includes a somewhat recent clip of IMF SDR-related goals by the current European central bank head Christine Lagarde back when she was the outgoing head of the IMF in the year 2017.

Late last week as the world remained seemingly mesmerized by a supertanker stuck sideways in the Suez Canal, the Chinese were reportedly finalizing another long-term trade deal with another nation-state also under current US sanctions.

Obviously, China has a lot of overland trade route ambitions through the old Silk Road regions.

National central banks are increasingly looking to gold bullion and other major fiat currencies to help hedge their long-term savings.

Much has changed in the last roughly two decades of time in terms of trade dominance and growth.

The current US President Joe Biden made headlines this week over his administration’s upcoming infrastructure stimulus package and plan. Already there is talk of a new fourth stimulus for US citizens perhaps being added to the plan, one which could include recurring aid payments ongoing. Not much other detail was provided.

But the ambitions of many of the democratic politicians are also brazenly out in the open calling for much more massive further deficit spending to come. Calling for numbers to be spent that sound insane.

You might recall on this channel over the last weeks and months we have been covering how the IMF Special Drawing Rights or SDR system is now beginning to rev up as a potential takeover solution from the current fiat US dollar-dominated system. The US Treasury appears to be outright endorsing this too.

Christine Lagarde was the former head of the IMF and in 2017 she openly spoke about her vision and dream that the IMF would be the then dominant world central bank, but also that it would be headquartered out of Being, China by perhaps as early as the year 2027.

It appears the heads of our financial game rule-making bodies are hell-bent on bowing to China all our future collective financial and monetary sovereignties.

Own prudent silver gold bullion positions to preserve wealth as they INFLATE away promises we collectively cannot keep in real value terms.

As always, take super care of yourselves and those that you love.