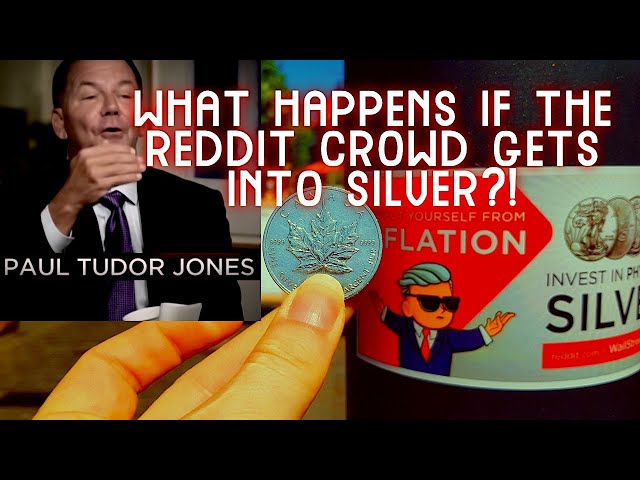 What Happens if the Reddit Crowd Ever Gets into Silver?

Last week, speculating billionaire Paul Tudor Jones went on CNBC and spoke about today's tiny commodity markets and how quickly they could double or triple in value.

Finite and dwarfed in size compared to the ballooning fiat currency values of stocks, debt instruments, and other financial asset classes.

Of the $88 trillion assets under management today, only about three-quarters of a percentage is allocated into commodities now in 2021 vs over 1.2% in 2011.

Coming price inflation hedges are a must now according to Paul Tudor Jones' view.

In the interview, PTJ declaratively asked "What happens if the Reddit crowd ever gets into commodities?"

Well, judging by the now near 120,000 members of the Reddit Wall Street Silver forum to date, I would say that is already happening and growing week after week.

Mr. Jones also stated, "God forbid if the bullies of the financial markets were ever to take commodities on like they did in the 1970s."

They could easily double or triple in price, no problem whatsoever.

So much like the current retail Wall Street Bets crowd is being used by long hedge funds as cover to produce short gamma squeeze price ramps in stocks like Gamestop, Nokia, and AMC.

What Mr. Jones in a coded language is inferring is that such a similar phenomenon could also eventually show up in the commodity markets.

My cynical suggestion is that historically silver price spikes need scapegoat covers and fall guys akin to the Hunt Brother of the 1970s & 1980.

Thus it appears bullies like himself, of the fiat over-financialized industry, might just use the growing Reddit commodity crowd as cover for the coming mania in silver price and gold valuation uprisings.

Perhaps in time, we will look back seeing that in this latest derivative-driven price pullback the bullies began to increasingly pile in.

If you missed Paul Tudor Jones' fastest horse at the race to debase coverage, May 2020 check it out below. Most of his bullish bullion points are still pertinent now, just over one year later.

My strong suggestion is that we collectively keep our eyes laser-focused on the larger underlying fiat monetary base ramping running amok.

As always you, the viewer out there, take great care of yourself and those you love.