We've been wondering aloud why there is so much gold bullion flowing into the COMEX and specifically Brink's NY out of the four major Swiss gold refineries?

The all-time record stopped COMEX gold contract is happening this month in June 2020, thus far it represents over 5.2 million oz of gold. Almost 161k of gold kilobars you see below. Each one valued at around $57 grand.

We've mentioned on this channel before how the coming fiat Federal Note price escalation over $2,000 oz is merely a question of time.

All the conditions, for a fiat-melting gold mania phase, are now coming to a full concert.

Headlines and commonsense stories such as these, highlight that this upcoming new record gold price is probably not far away at all.

[ More on that stimulus bonanza shortly, but let's read on. ]

As stock markets roar back from the coronavirus-led rout, advisers to the world’s wealthy are urging them to hold more gold, questioning the strength of the rally and the long-term impact of global central banks’ cash splurge.

Before the COVID-19 pandemic, most private banks recommended their clients hold none or just a tiny amount of gold.

Now some are channeling up to 10% of their clients’ portfolios into the yellow metal as the massive central bank stimulus reduces bond yields - making non-yielding gold more attractive - and raises the risk of inflation that would devalue other assets and currencies.

[ Well if they ever bothered to do any full fiat currency era research they'll know that 25% gold bullion allocations have had the best risk-reward profile over the last near 5 decades of time. ]

Nine private banks spoken to by Reuters, which collectively oversee around $6 trillion in assets for the world’s ultra-rich, said they had advised clients to increase their allocation to gold. Of them, four provided forecasts and all saw prices ending the year higher than they are now.

The boost in demand could be a self-fulfilling prophecy for the metal’s price, as any shift in allocation from bond and equity markets, estimated at up to a combined $200 trillion, has a much larger impact on the smaller gold market, estimated at less than $5 trillion.

[ Well if you watched our recap from last week, these figures would be making sense to you, because we covered the sizes of assets around the world. And the fact that only about half of the physical gold world is bullion orientated, near 1/4th of all physical gold resides with government central banks, the other quartile with prudent investors like some of you out there. ]

I know, $5 trillion of gold bullion layered away in hidden around the world sounds like a lot.

But hey, the three largest fiat currencies in the world had their respective central banks digitally create $5 trillion from thin air in the last quarter alone. 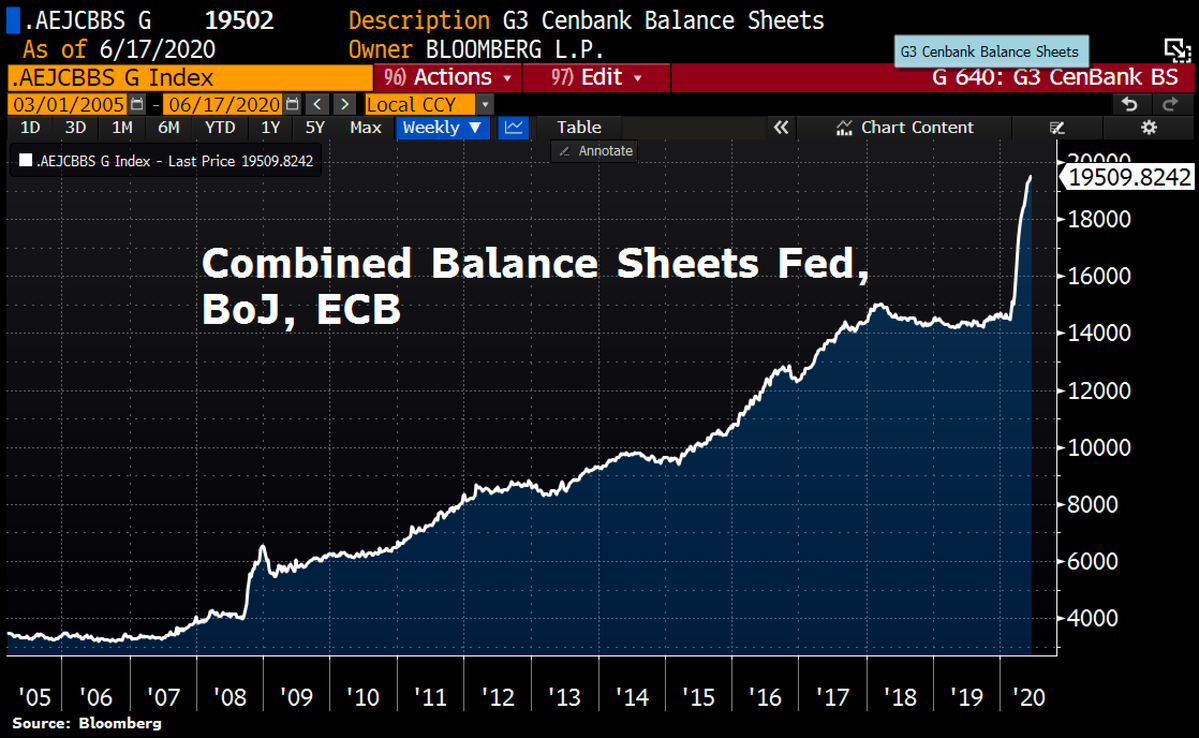 How do you think gold's going to react to all this, medium and long term?

Take a look at that 2008 blip, remember what silver and gold did after that?

Hello, this is James Anderson on behalf of SD Bullion.

We're going right back to Swiss gold imports. As our hard-hitting journalist, Peter Hobson from Reuters reports the following.

If we add up the last two record size gold import months from Switzerland into the USA, we get a grand total of 7.659 million ounces of gold which jives well with the record-sized inflows we have seen in the last few months at Brink's NYC. About 7.5 million of these Brink's NYC gold bars are in either 100 oz or 32.15 oz gold kilobars.

Underlying Comex gold bullion amounts have never been over 13 million ounces. Open interest is down by nearly half of what it was at the start of 2020 and trading volumes are running at like 1/3rd their most recent highs during the viral economic crash in March 2020.

FT now signals the gold world will never be the samehttps://t.co/wXQ5ybzF1n pic.twitter.com/rVY9QKib6V

Then we got king RICO desk above. The Department of Justice is still working on prosecuting the long time head precious metal trader and his underlying. The same pack of employees whose actions perhaps the JP Morgan to siphon much of this gold throughout the 2010s.M

If one alleged RICO trading desk that owns over 1/3rd of you underlying gold reserves, is that not too much concentration?

What about in the overpriced COMEX silver market. We mentioned last week how bullion mints are flying 1,000 silver bars from London because prices here were too divergently high throughout the burgeoning viral crisis.

Is having just one alleged RICO trading desk that owns over 1/2 of you underlying silver reserves, is that not too much concentration?

Maybe, Ted Butler's theory is going to be proven correct. That these greed-driven alleged RICO precious metals trading desk has been preparing to double-cross other commercial banks and finally bet net long on the most important monetary precious metals price discovery market in the world.

Or maybe the over 21 million documents the DoJ are combing through will give away how they got such large hoards of bullion perhaps too cheaply.

Well, time will tell. We'll be monitoring it.

Moving on to close this week's market update. One of our favorite billionaire silver bullion bulls was out commenting on financial markets this week.

They say if you want to hear what the smart money thinks, listen to the bond market.

NY Fed advisor bond trading billionaire, Scott Minerd, has been referred to as the current Bond King, and last week we cover his CNBC interview about where he sees the stock market bottoming at and why (1,600 S&P 500, down by about ½ nominally from 3,000 currently).

Plus he of course sneaks in how he and his clients are major monetary bullion bulls.

Echoing how we started this week's update.

High net worth, big money is coming to bullion.

And infinite QE ongoing is going to make of them fellow bullionaires.

Thanks for coming by and visiting us here at SD Bullion.