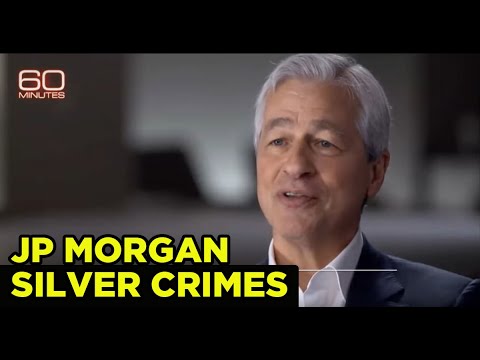 We often cover the ongoing JPMorgan silver bullion saga here. It seems we have a new twist in the ongoing story since JPMorgan's takeover of the bankrupt Bear Sterns short silver position in early 2008.

Rebutting this over 10-minute interview’s lack of acute questioning of the mega-banks CEO. A man who many financial experts argue is a white-collar criminal operating in the open public.

Just a few questions worth wondering as the US Department of Justice continues its Racketeer Influenced and Corrupt Organizations prosecution against now 7 former longterm JP Morgan employees. Comprised of the precious metals trading desk head and under-ling precious metals traders.

If you are a silver bull who has been saving silver or other precious metals bullion products for the long term chances are high you have heard about JP Morgan’s involvement with the global day-to-day price discovery of physical precious metals and especially silver bullion.

Well today, we are going to review some large verifiable facts regarding JP Morgan’s silver saga from early 2008 up until today in early 2020.

We also are going to look forward to this new decade the 2020s, with some perspective insights and questions over what is to come for the world’s largest bank betting house and those charged criminally who worked there for near a decade or more of time.

Welcome to this week’s SD Bullion Market Update. I am your host James Anderson.

All four major precious metals had strong weeks to start the 2020s.

The major push for precious metals to close this week was US President Trump’s decision to kill the 2nd most powerful commander of the Iranian military by an airstrike. This action obviously spurred concerns for further tensions and possible retaliatory military and terrorist conflicts to come in response. Also note that this past week too Russia, China, and Iran’s navy coordinated in military exercises as a show of unity amongst the three nations.

The spot platinum price closed up at $985 per troy ounce.

Finally, the gold-silver ratio floated higher requiring now about 85 ounces of silver to get 1 ounce of gold.

Let’s go back to how JP Morgan got involved in the silver bullion industry in early 2008 when Bear Sterns alleged naked silver short position (meaning they did not have enough physical silver bullion to cover their short positions at the time). Blew up in their face as silver climbed from second half 2007 to early 2008 from $11 to over $21 ounce right around the time Bear Sterns went under.

So let’s do a quick review here.

Today at the beginning of the year 2020, Reuters has recently reported that JPMorgan’s precious metals trading desk staff has shrunk to around half a dozen people according to industry sources.

This is the guy in allegedly now in charge less than a year from when their former precious metals trading head got indicted by the US Department of Justice using anti-mafia racketeering statutes to do so.

Looks like this current JP Morgan precious metals trading desk head got employed there just as his former employer was going bankrupt and the silver spot price was falling through the floor in September 2008. All while silver bullion products were becoming next to impossible to buy in the wholesale and retail US markets, with silver bullion coin premiums often twice the then spot price ongoing through late 2008.

-
So starting from a perch as high as $21 per troy ounce, JP Morgan silver short traders allegedly made a lot of fiat currency bonuses shorting silver down to around $9 per troy ounce in the late 2008 silver market.

The silver went on a tear by late 2010 into late April 2011, which perhaps scared JP Morgan traders into knowing they would need silver bullion positions amassed in order to continue to allegedly spoof and possibly further rig the silver derivative market.

Their April COMEX warehouse was rushed into reality and since then a modern-day record silver bullion position has been amassed there. No one other than a small handful of JP Morgan directors and employees likely knows how much physical gold and silver their bank has outright amassed since spring 2011. Much of this silver here could certainly be clients they allegedly front ran over many years ongoing.

JP Morgan is also the custodian of the large silver ETF derivative with millions of unsecured shareholders from which JP Morgan has likely skimmed a large amount of silver from over the last decade or so.

And finally outstanding we have the US Department of Justice’s RICO lawsuit ongoing, and that brings us to our financial tweet of the week in which ZeroHedge commented about a week ago the following:

2019's undisputed Man of the Year: Jamie Dimon, for successfully forcing the Fed to launch QE4 after sparking a repo market crisis when JPMorgan withdrew $200BN in liquidity from repo markets.

The allegation here is that JP Morgan’s pulling of their REPO loan facility sparked the not QE4 NY Fed REPO loan ramp ongoing.

This all happened around the same time that the US Department of Justice filed RICO charges against the JP Morgan precious metals trading desk. Perhaps it is not by sheer coincidence all this happened at the same time.

Could it be that directors at JP Morgan want to show the US government, that the financial too big to prosecute power that is, remains JP Morgan Chase & Co.?

Well, there are many out there in the precious metals blogosphere who have been proven correct with over a decade of many allegations publicly made against JP Morgan. And perhaps again time will tell later this decade if indeed this latest hunch of Mr. Ted Butler is proven indeed correct.

Thanks for tuning in this week. We look forward to an exciting decade for precious metals investors to come.