The US stock market had a hiccup last Thursday, and that hiccup has many analysts, traders, and investors wondering: Is the "bear market rally" over, or was this the first pullback of a new bull market?

If developments in the United States over the last week are any indication, however, it would seem that upcoming market intervention errs on the side of the latter. Specifically, both the Federal Reserve and the Trump Administration were out this week discussing monetary and fiscal policies that are either up-and-coming or could be up-and-coming.

On Monday, at 2:00 p.m. EST, the Fed issued a press release whose title is pretty much self-explanatory as far as the initial, expected impact on US financial markets (actual press release title shortened for emphasis): "Federal Reserve Board announces updates to...which will begin buying a broad and diversified portfolio of corporate bonds to support market liquidity...". Said differently, the Fed will be buying corporate bonds, and thus by "supporting market liquidity", we can say that the Fed is, not just in theory, but in practice, the buyer of last resort, which, arguably, is for the purposes of keeping interest rates from rising. If there are no buyers for corporate bonds, then it means the price is somehow wrong, which, in case of the bond market, means the price for the bond is too high, or the interest rate, as an inverse function of price, is too low).

The Trump Administration has also been talking stimulus, and where this differs from the Fed is that we're not talking about stimulating Wall Street, but Main Street. Specifically, Bloomberg has been reporting that the administration is mulling a $1 Trillion fiscal "infrastructure" spend. It could be argued a fiscal spending bill could easily make its way through Congress to be signed by the President, in part because of the literal destruction of Main Street caused by the civil unrest, protests, and rioting since late May, in addition to infrastructure that is already in need of repair and has been discussed over the years. Interestingly, the US Fiscal Calendar year ends at the end of September, so this is something that, not just in theory, but also in practice, could begin before the election in November.

Needless to say, the US stock market has nearly recovered last week's losses: 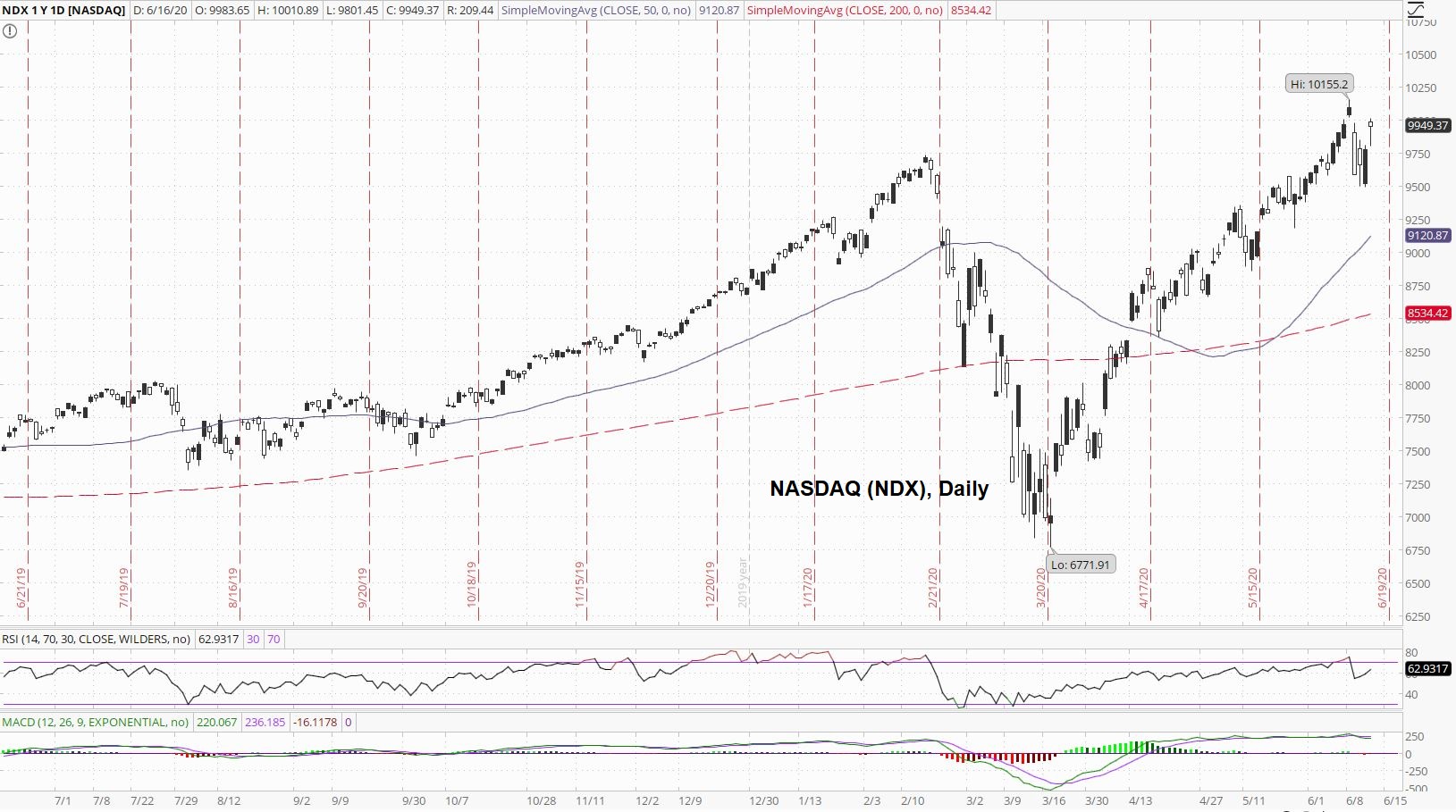 Are all-time record highs up next?

Volatility has been coming down since last week's spike: 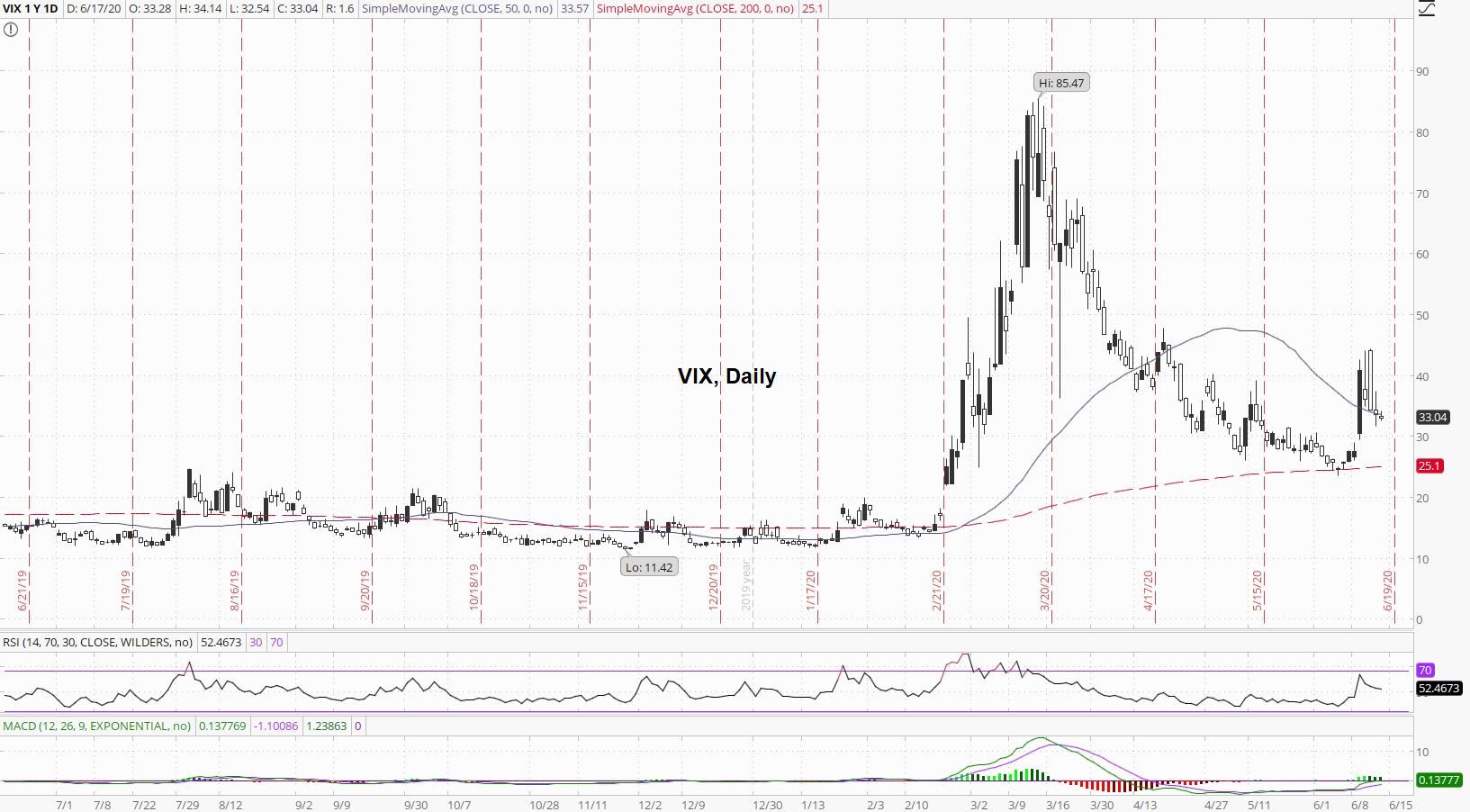 The VIX hs now perched on its 50-day moving average.

If the yield on the 10-Year Note was in a sideways channel between 0.6% and 0.7%, the yield is now breaking out for the second time: 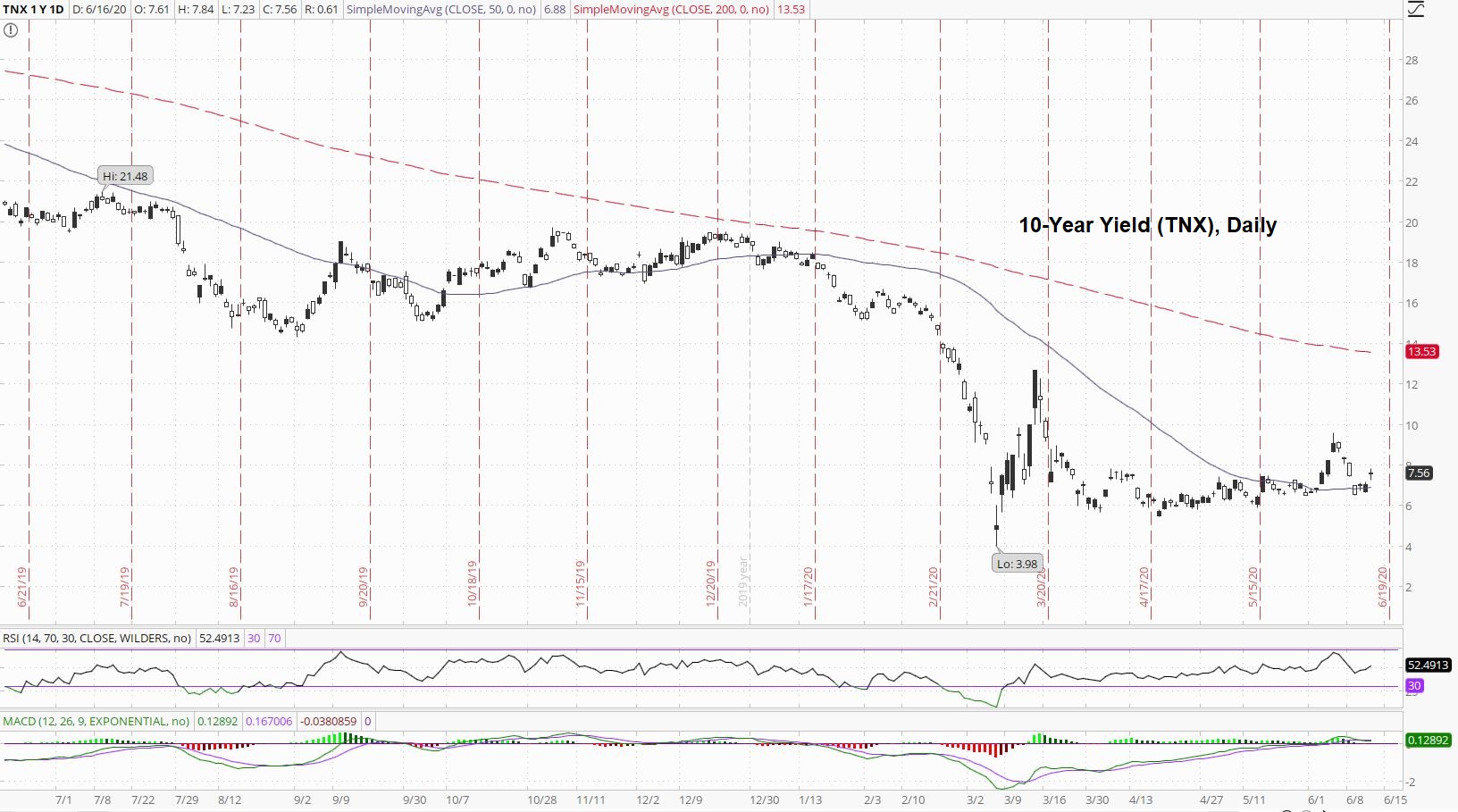 Many people argue, however, that we could see a melt-down in yield if the stock market is in an epic bear market rally as opposed to a new bull market.

It remains to be seen whether the US Dollar Index is finishing a dead-cat-bounce: 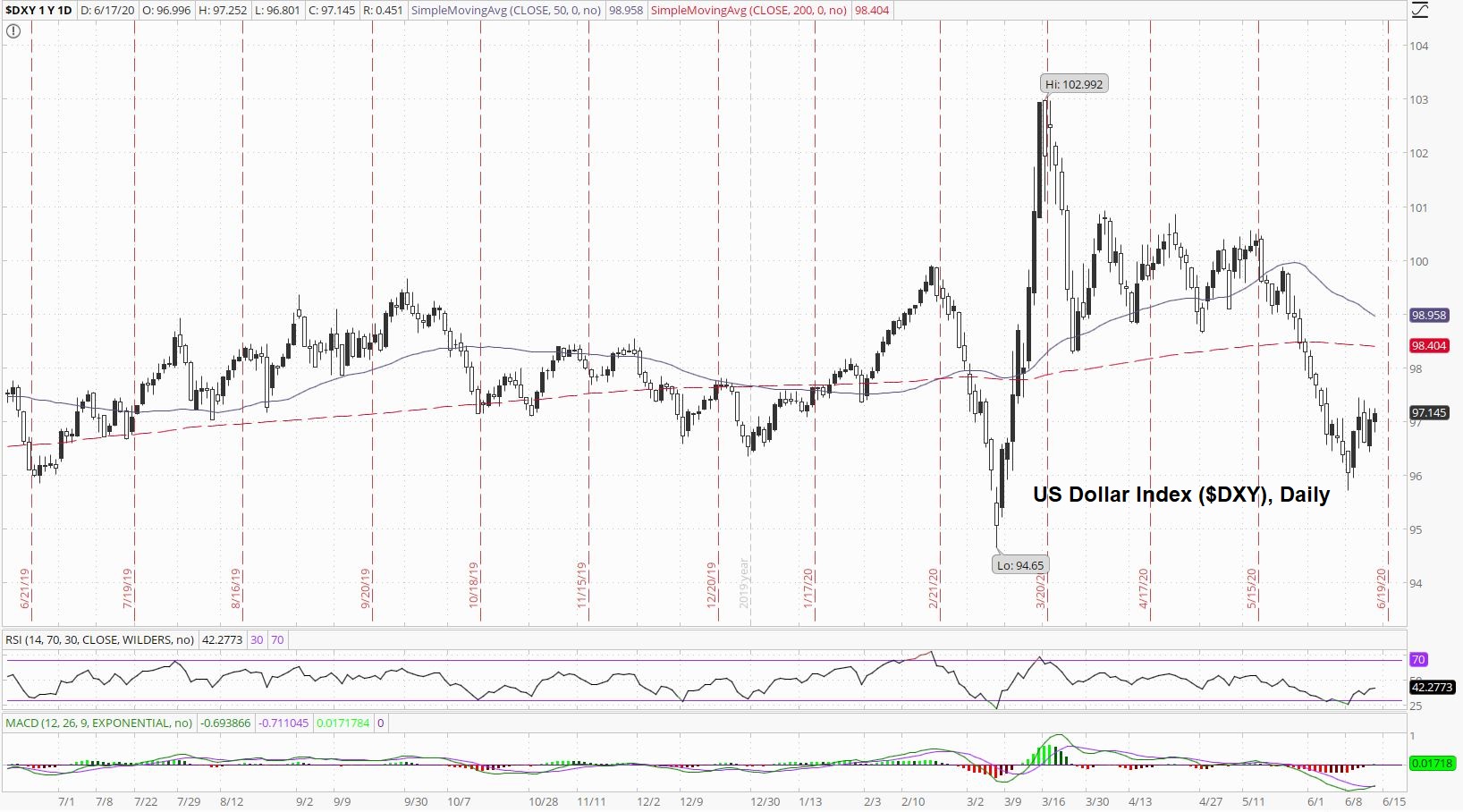 Not to make light of the rapidly escalating geopolitical tensions between China and India, including outright military conflict between the two nations in a contested region which has led to the deaths of many soldiers, but assuming tensions can be de-escalated and some sort of ceasefire can be agreed upon, there are still the looming Trade War and Cold War tensions that are rising between the United States and China.

After breaking out above its 200-day moving average, copper's now riding it: 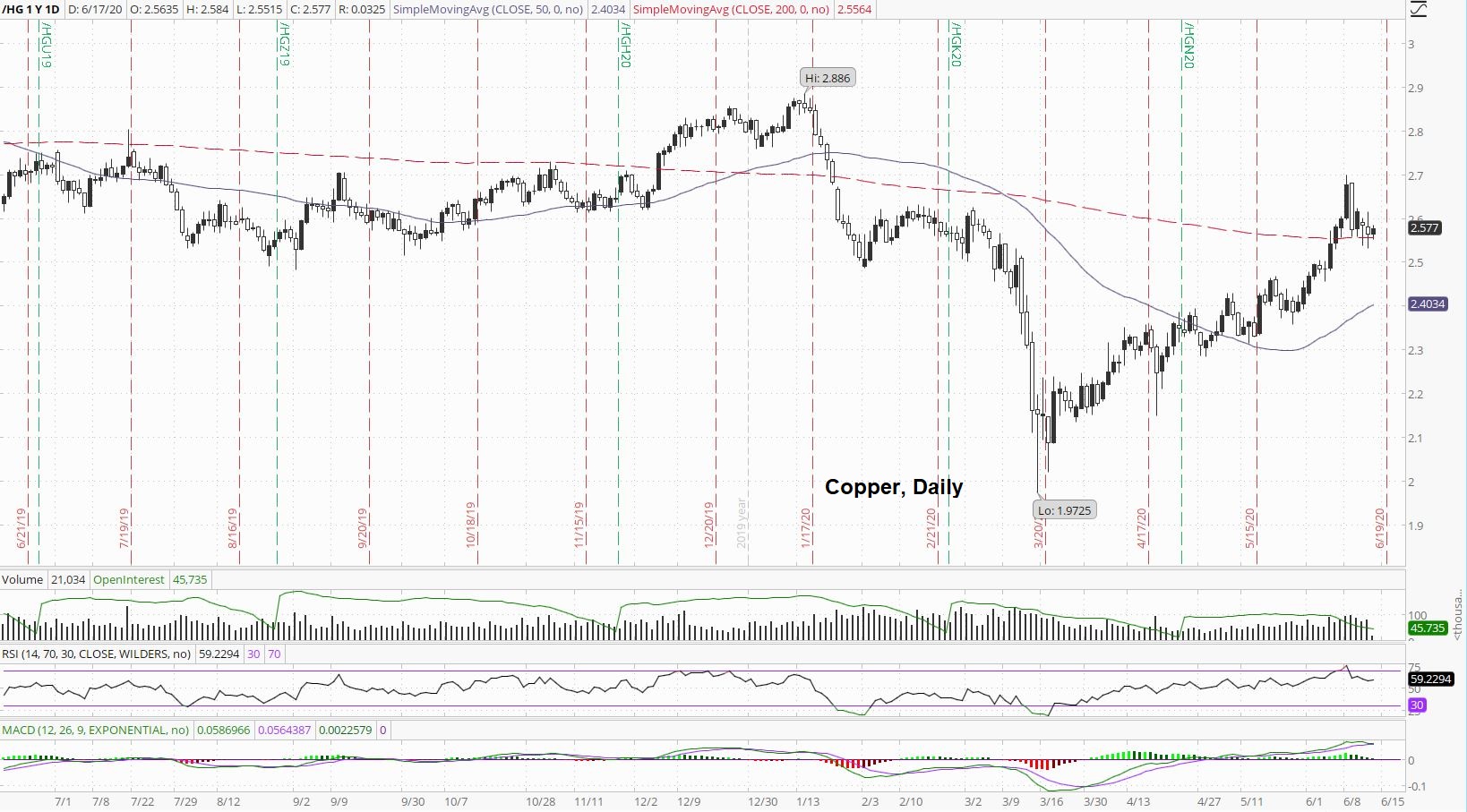 It's quite possible that besides the textbook definition of "Wall of Worry", copper's current daily chart is the featured image.

Crude oil has yet to fill its gap: 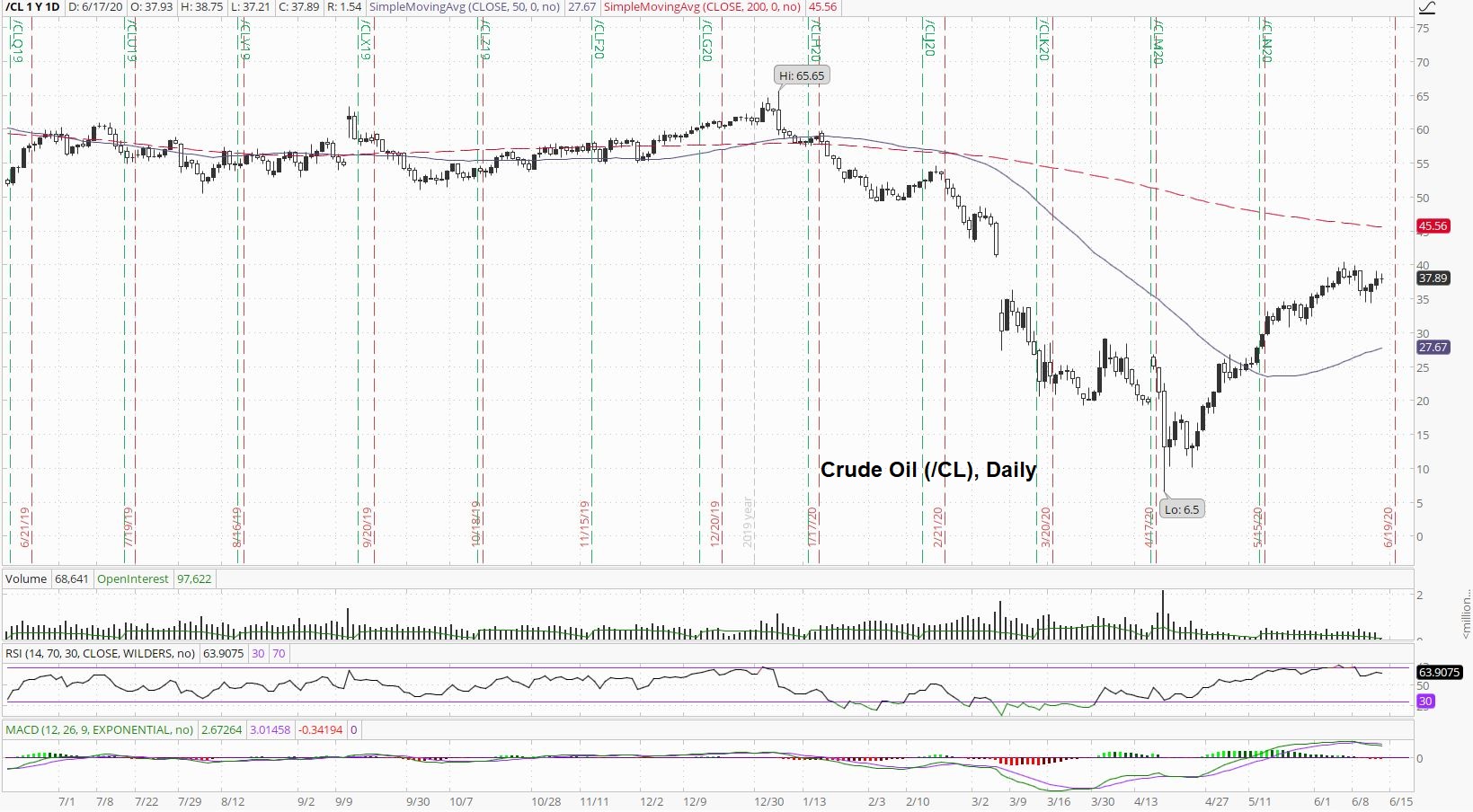 The struggle between consumption and storage continues.

One can easily defend a bullish outlook for platinum: 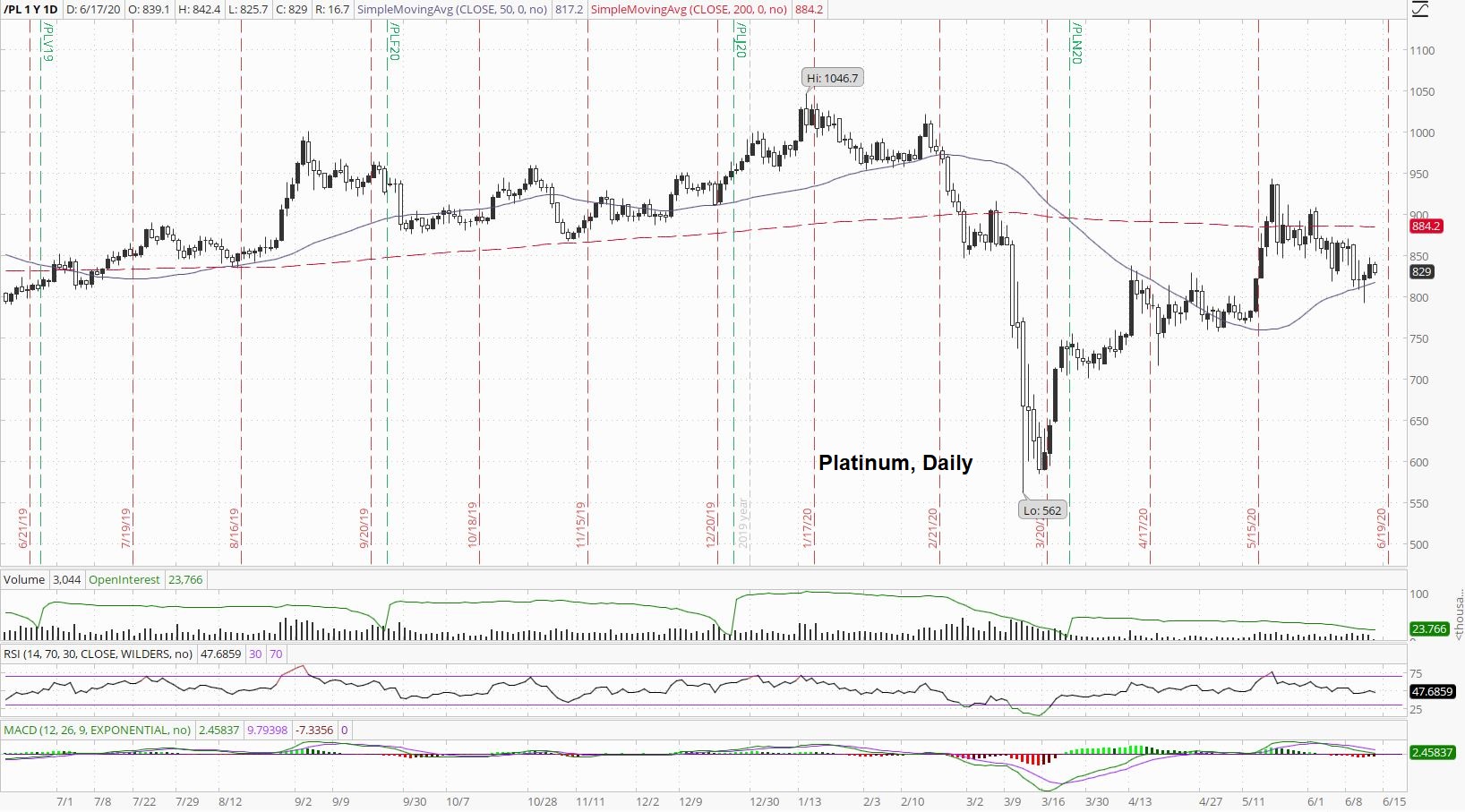 We clearly see a series of higher-lows and higher-highs, and platinum's 50-day moving average has been acting as support.

Palladium's price action has turned into a very tight range with little movement: 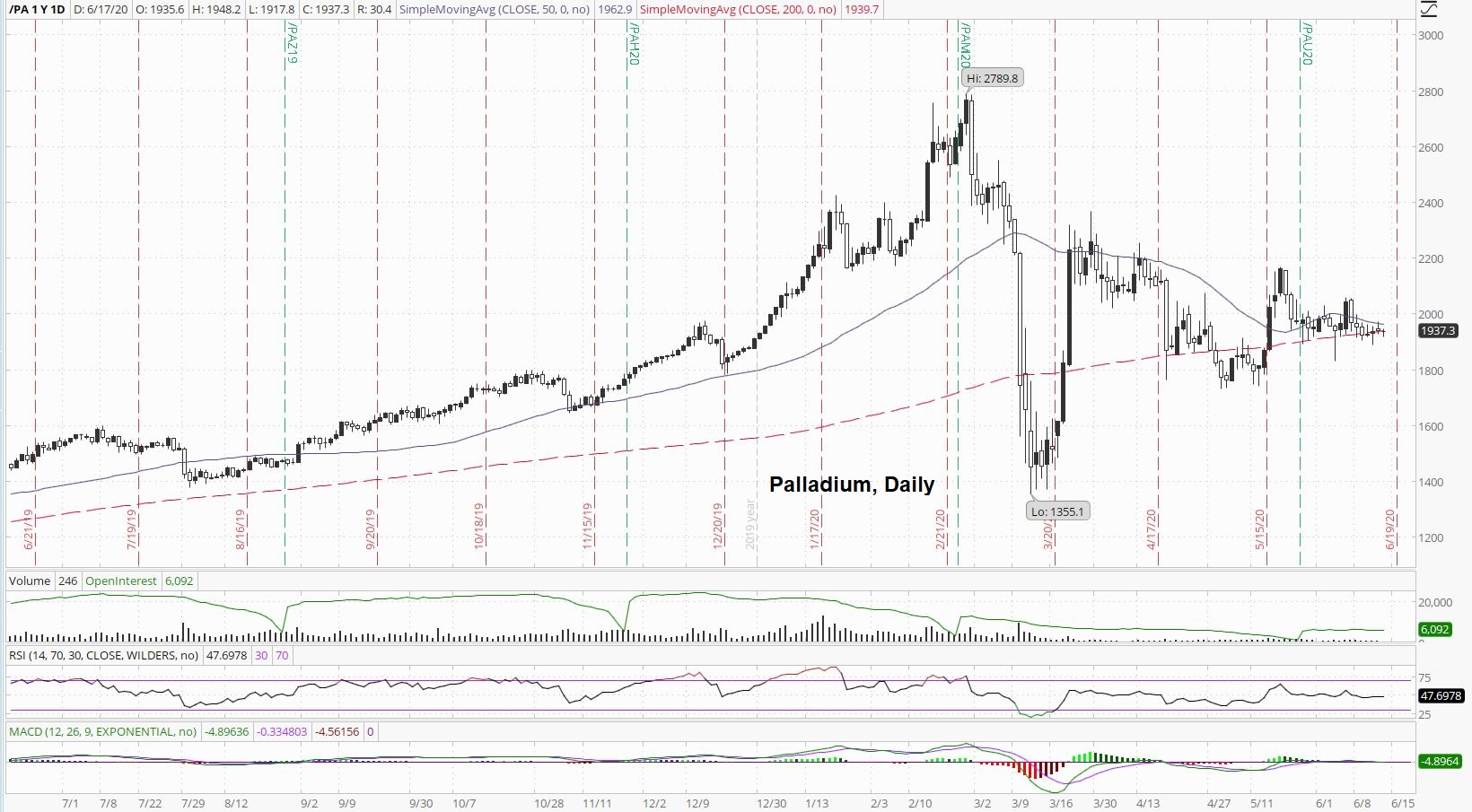 What will it take for palladium's price to get moving again? 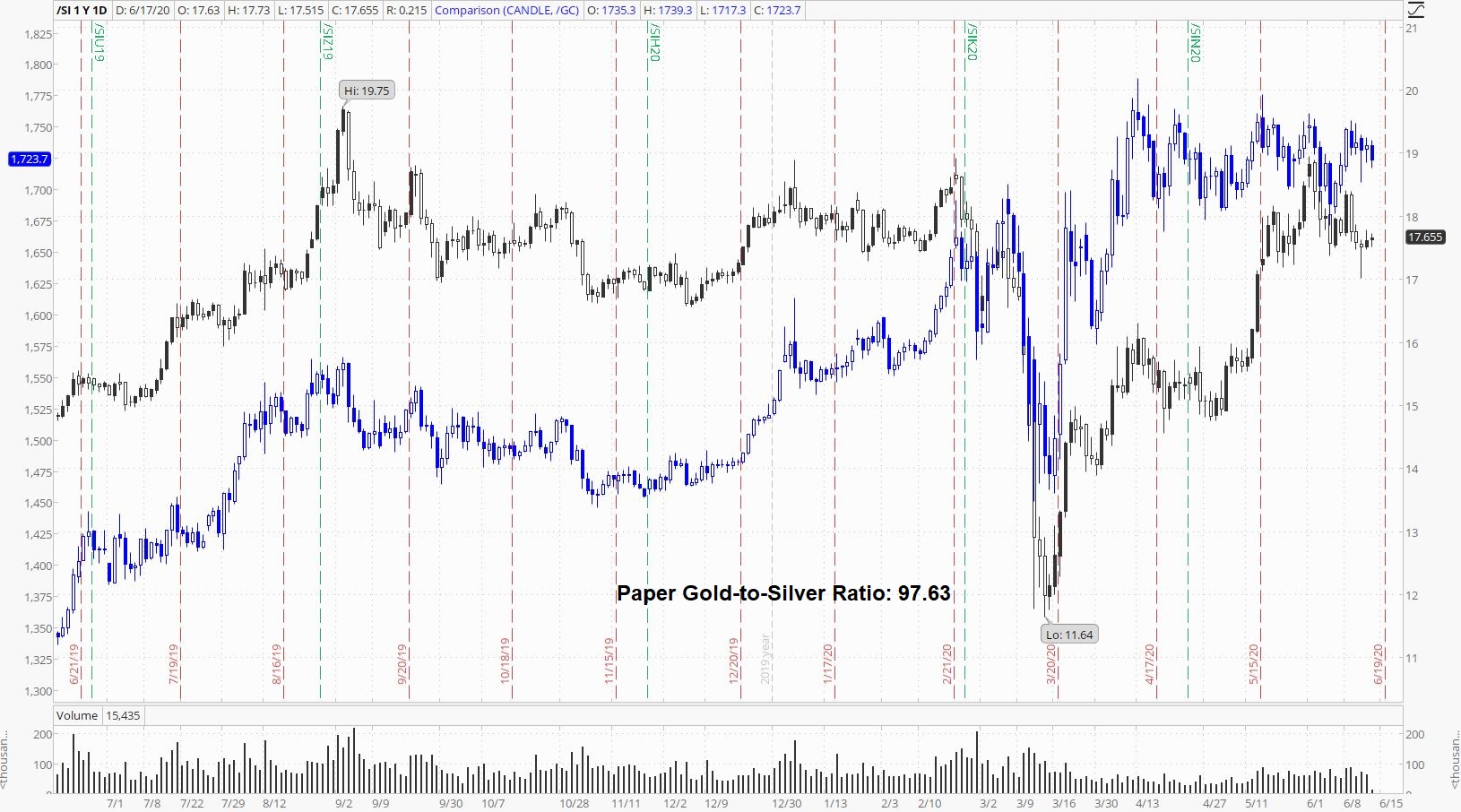 The ratio has moved up for the stacker-friendly reason of lower silver prices, and word has it there's a good deal to be found on 90%!

It would be hard for even the most gold perma-bear to argue against such impressive support between $1700 and $1725: 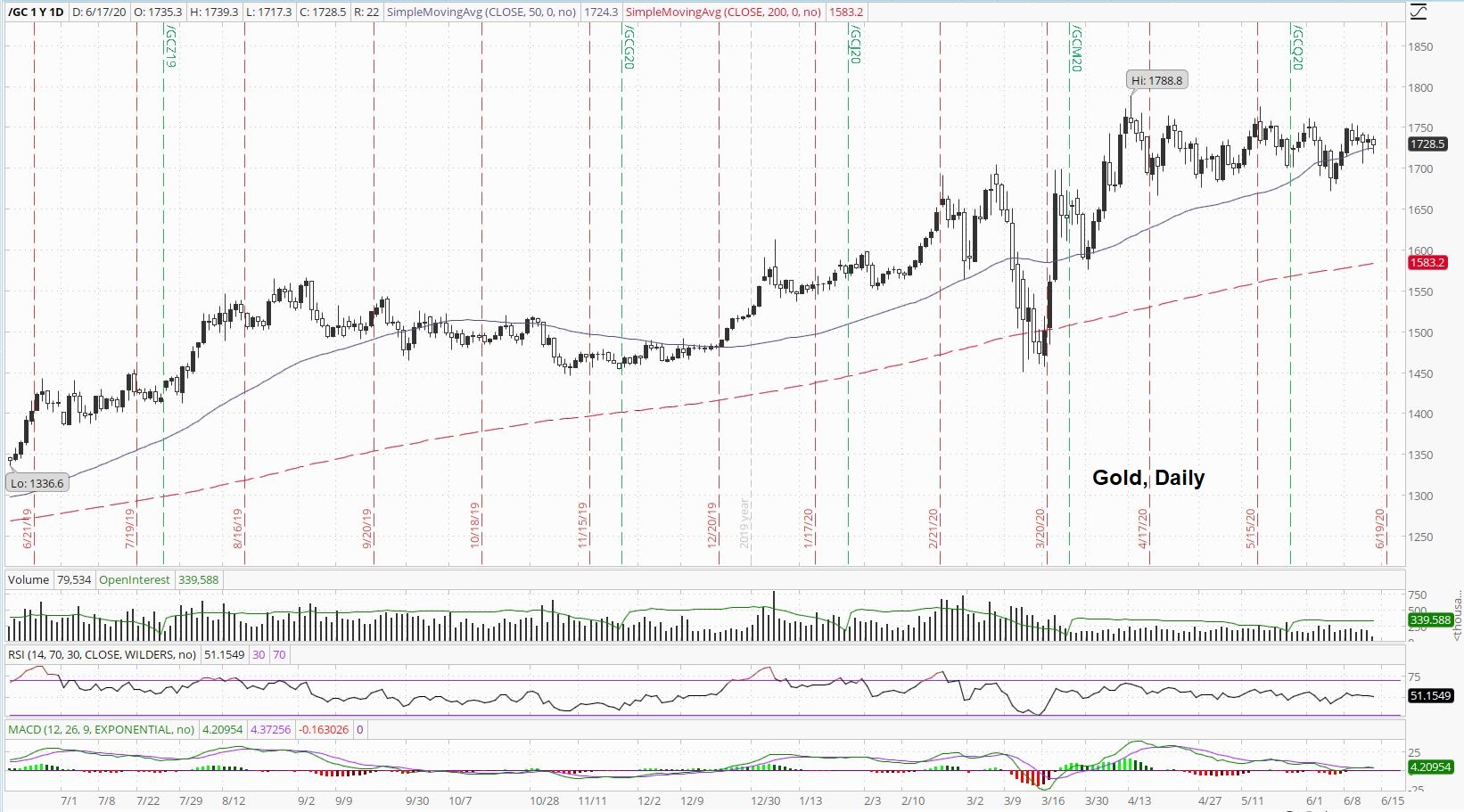 Any underlying can correct not just over price, but also over time, and in the case of the underlying above, gold, we seem to have the latter. 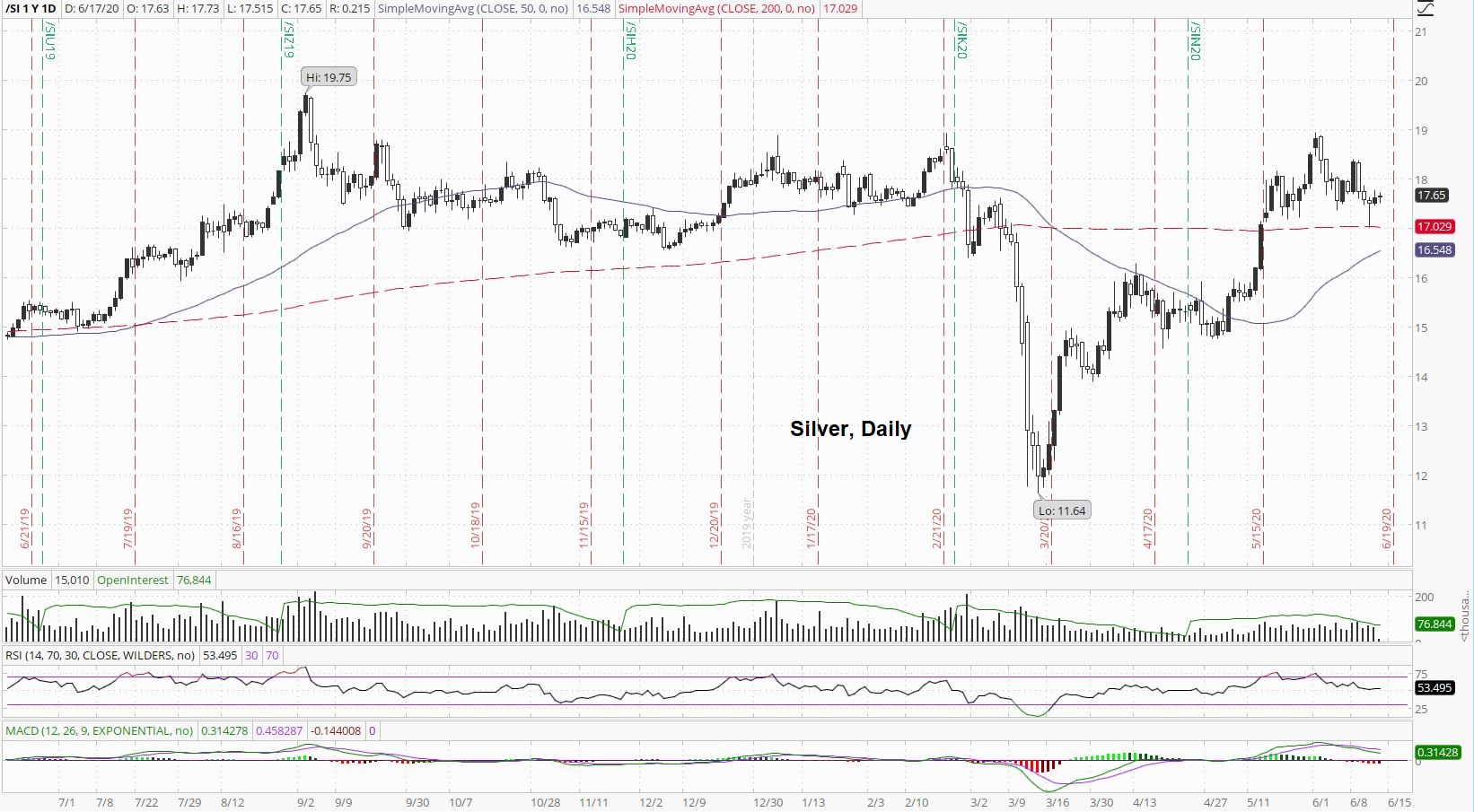