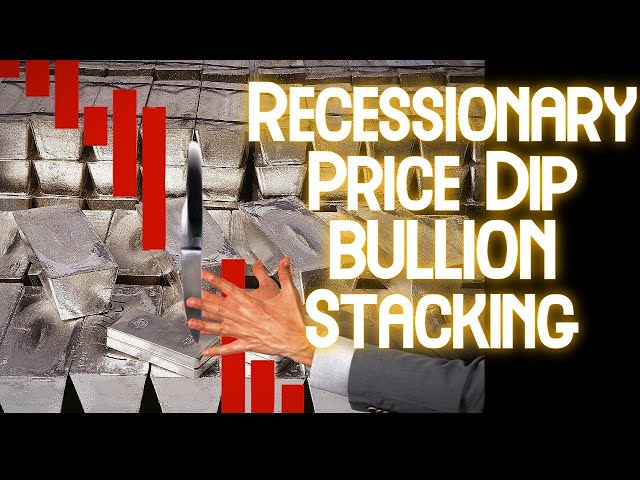 The numbers are extraordinary in sheer size and also in a historical financial market context.

We also examine new data which illustrates it is already an economic recession in the USA this summer of 2022.

Silver and gold spot prices increasingly sold off throughout this week’s trading.

The spot silver price slipped below $20 oz for most of today, Friday. More on that matter in a minute.

The spot gold price also briefly fell below the critical psychological $1800 oz level but rallied to close in the low 1800s per ounce to finish this week.

The gold-silver ratio climbed as it technically recently looked like it was bound to blast higher into the low 90s to finish this week’s weakness in monetary metals price action.

In terms of where to next for silver and gold, with recession almost officially admitted, it’s hard not to argue lower for longer.

Today I did an unscientific Twitter poll of over 100 silver stackers who follow me, and their answers split along these support lines lower.

Granted, a bearish manic depressive vote may have overwhelmed the data downwards.

And, of course, no one knows where the bottom might be found, only well later looking backward.

If you were here during the spot price crash in March and April of 2020, you’d likely recall a spike low near $12 oz spot silver, yet silver bullion inventories worldwide were next to impossible to find below $20 oz at the time.

Turning to the escalating gold-silver ratio and over 100 of my Twitter followers today.

Technically, it looks like the Gold Silver Ratio might climb higher still towards 100 not too long ago. Ultimately one might expect gold to outperform silver in a recessionary deflationary sell-off.

And if we have any black swans like bank failures and or financial contagion worldwide, all bets are off on how high the paper gold-silver ratio (GSR) could diverge from the physical bullion gold to silver ratio as it did in March 2020.

Again back to this falling knife analogy summer 2022.

Better to fiat US dollar cost average disciplined bullion buying while available at reasonable premiums than trying to time things we don’t know for sure to come. Picking the bottom is nearly impossible.

Moving on to the US recession is likely already underway. Yesterday the Atlanta Fed made news switching their once lightly positive GDP Q2 to a negative -1% contraction in economic growth.

Then today, they made more headlines as that figure was updated, falling further to -2.1%.

We still have to live through this month’s nonsense arguments of whether or not we are officially in recession. Many believe it is inevitable. When the recession becomes official, disorderly sell offs in financial markets may force the fiat Fed to pivot.

The nation of Japan invented this ill-thought policy of QE-ing and monetizing its debt to keep yield curve control on its sovereign Japanese bond market.

The Bank of Japan now owns more than half of its entire IOU market, spending about $80 billion fiat US dollar equivalent in just one week to keep its financial system from falling apart.

You can see the level of escalation if you squint at the top right of this chart. The fiat Japanese bond market monetization process of a figurative snake eating its tail is now going to the next level.

Once again, have a hard gander at the gold and silver fiat Japanese price chart covering this entire full fiat currency era-spanning just over 50 years.

The gold yen chart on the left technically says higher and to the right for much longer than expected.

If, over the long haul, silver follows and outperforms gold eventually in a bullion bull. Well, I think you get the idea of what potential awaits silver in the land of the rising sun.

To retain some credibility, Christine Lagarde is now admitting that secular inflation is the new normal.

We are turning now to the US bond market. Which just put in the worst first half of a year since 1788.

I don’t think that will be the final time we get to say that either this decade. Happy holiday US bondholders.

Similar story using global government bond performance data. You must go back to 1865 (US Civil War times) to find global bonds performing this poorly in the first half of a year. Also, note that the other times on this chart revolved around significant world wars and material economic and financial structural changes.

Nearly all significant financial market asset classes worldwide are performing as poorly as ever during this post-1980 fiat financialization era. In real terms, I suggest we are only just starting this unfortunate trend.

Looking at the US stock market’s first half of the year, a sea of red for most stocks outside the commodity sector.

Supposedly after terrible first halves, the stock market performs better for about half the years we have data. But like I said, no one knows precisely how the second half of 2022 will turn out.

What we do know is the 60% bond and 40% stock investing crowd is going to have to change their concuss thinking, or they will lose their careers at this rate,

One final data performance chart looks at the Bloomberg Commodity Index throughout this fiat currency era (1971-2022). There has been a significant selloff in commodities, aside from still somewhat potent crude oil prices of late.

Most of this data appears to be pricing in recession now, not later.

Finally, we are returning to the precious metals markets to close this week’s update.

This week, JP Morgan, Citibank, Bank of America, and Goldman Sachs made headlines. And it wasn’t the recent call by some Goldman Sachs employees claiming gold is headed to $2,500 oz before the year 2022 ends.

No, the USA’s Office of the Comptroller of the Currency (ahem, fiat currency more precisely) made big, more accurate accounting admissions this week.

Since the start of 2022, commercial megabanks can no longer leave their gold derivative books offline in the unreported exchange rate derivative contract pile. Instead, they must report how many gold derivatives they hold in gold-related futures and options derivatives.

An additional more than $400 billion than they admitted to in Q4 2021, only recognizing the silver, platinum, and palladium futures and options they have been carrying on their books for over the last two decades.

So it now admitted that the most significant 2008 bailout zombie Citibank and the USA’s largest bank JP Morgan together hold over 90% of all precious metals derivative leverage in the USA.

Of course, the offshore leverage in London and Europe is arguably worse. How long bank-assisted precious metal value suppression can endure is impossible to say. At the very least, people paying attention to financial matters are finally being exposed to ongoing damning leveraged price suppression data.

What is reportable is that the registered COMEX silver pile continues falling.

Now at only 69 million ounces, well over half what it was when the Q1 2021 Wall Street Silver Squeeze kicked off.

Here is a more extended look at where this data fits in versus past silver spot price runs.

Past silver price runs have often kicked off once COMEX registered silver ounces dipped below 50 million. At the pace we have been on over the last few years, perhaps we’ll get down to those lower levels later this year.

To wrap it up, especially for my long-stacking silver bullion bulls out there, a recession is likely here or arriving soon. With its new financial positionings, many expect the fiat economic powers to pivot to easing once again eventually.

Take advantage of the price dips in commodities, especially precious metals, while they last.

That is all for this week, have a spectacular 4th of July holiday weekend, US viewers out there.

And as always to everyone, take great care of yourselves and those you love.